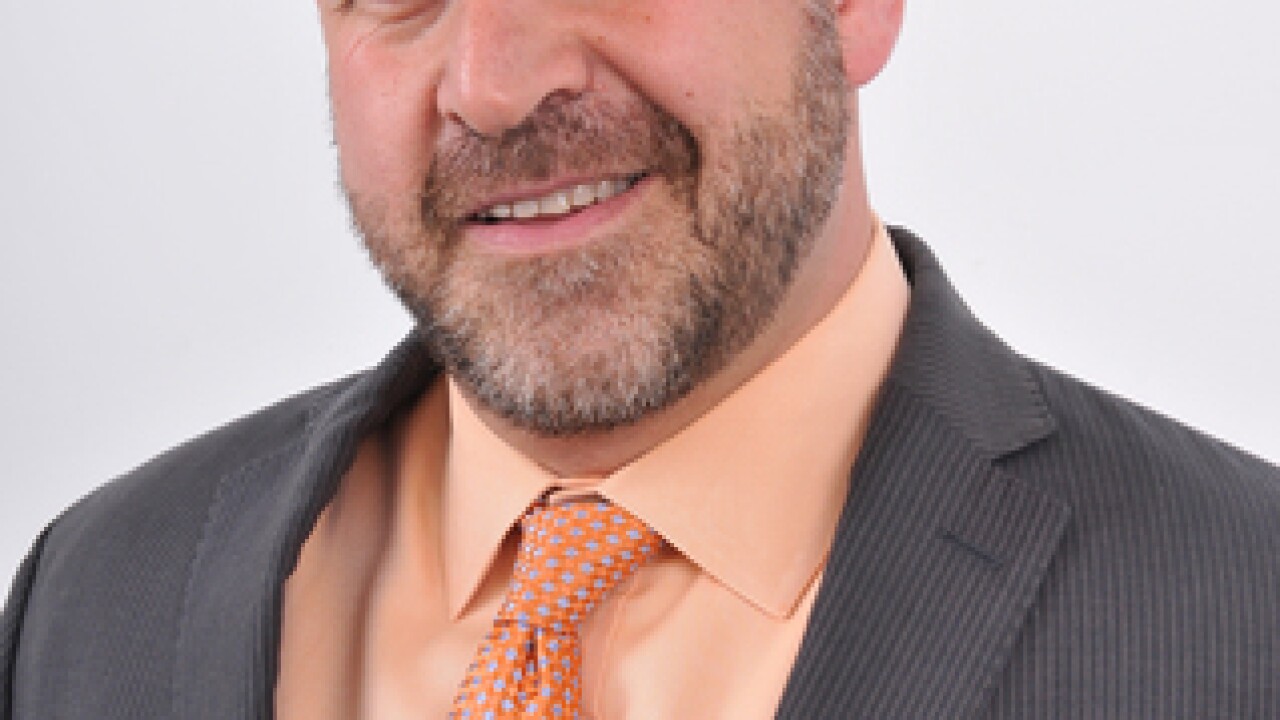 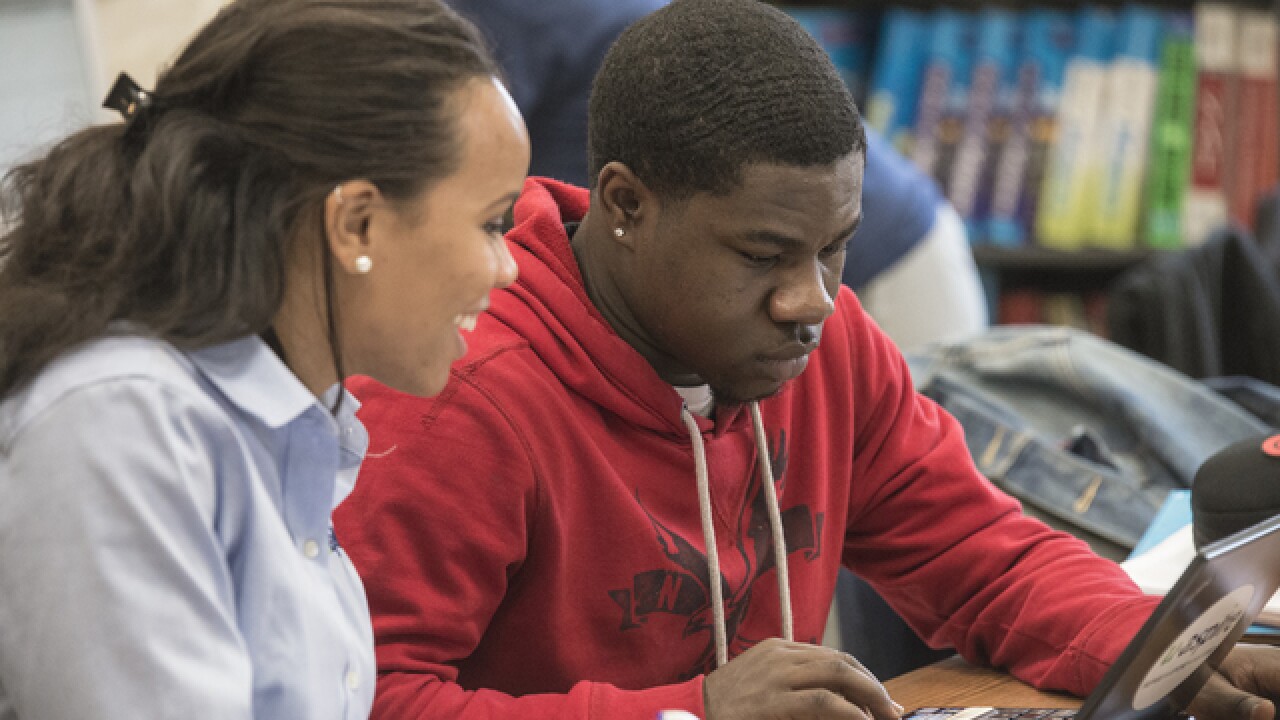 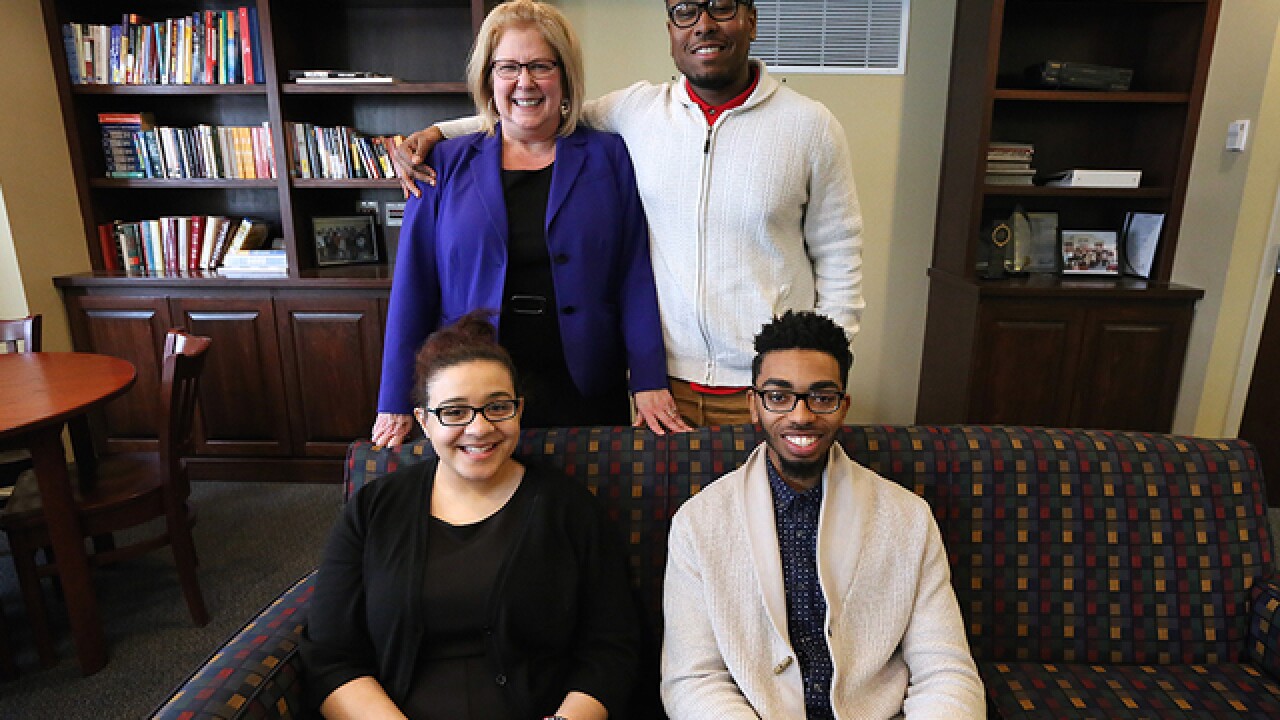 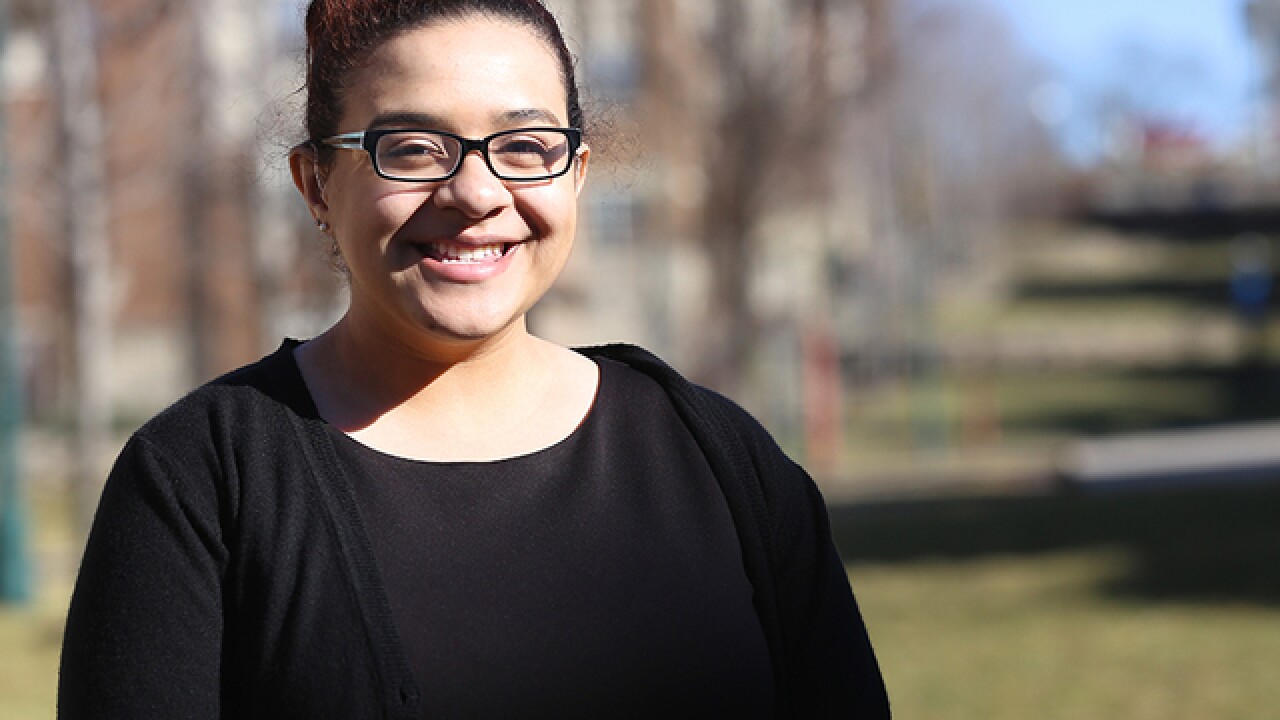 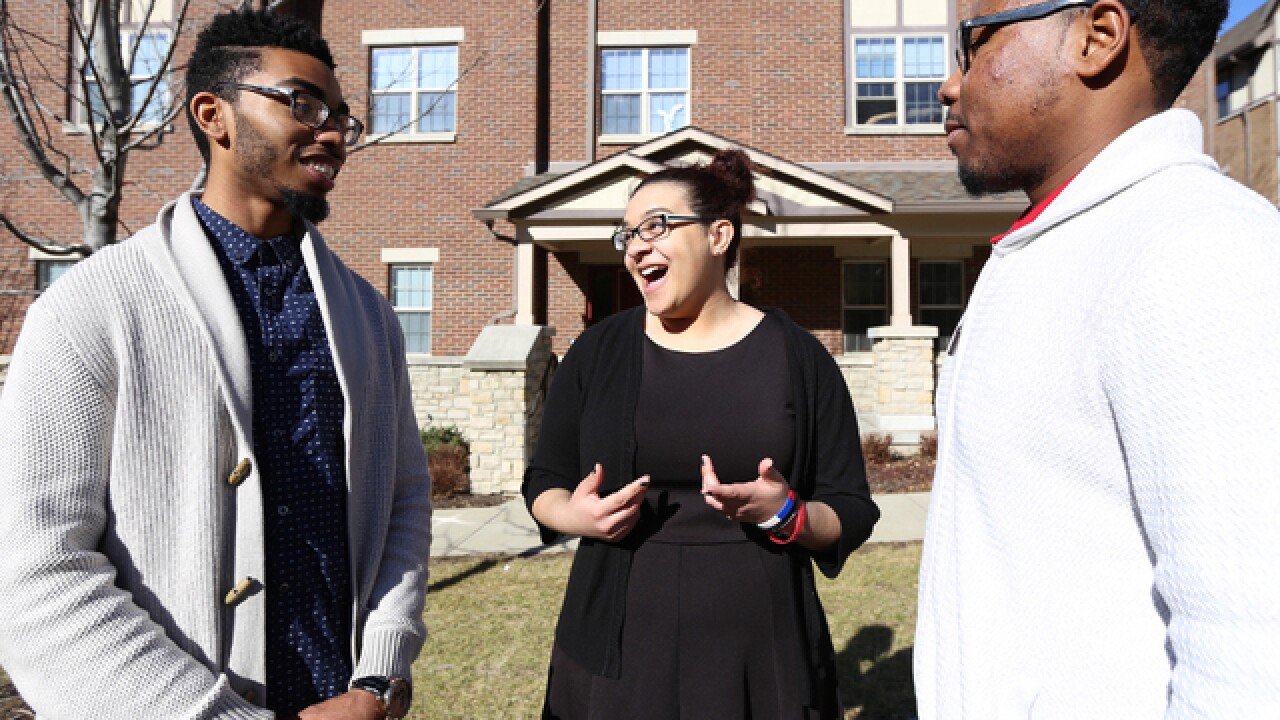 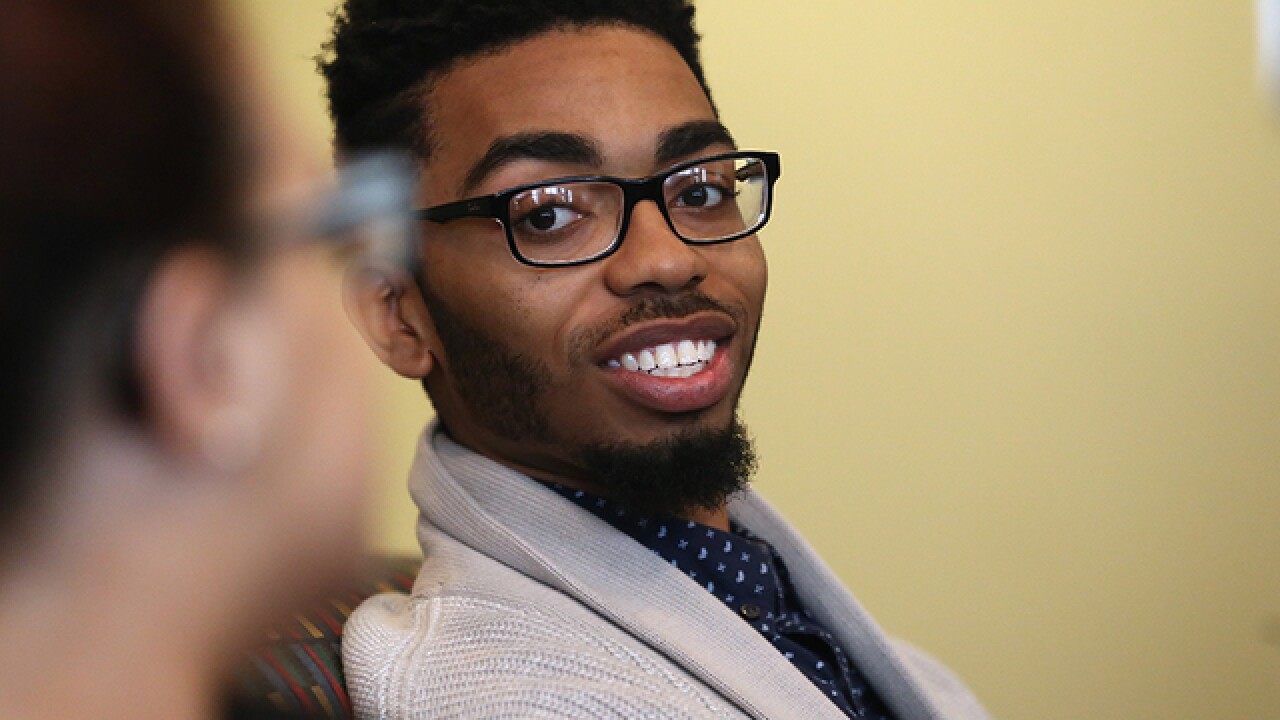 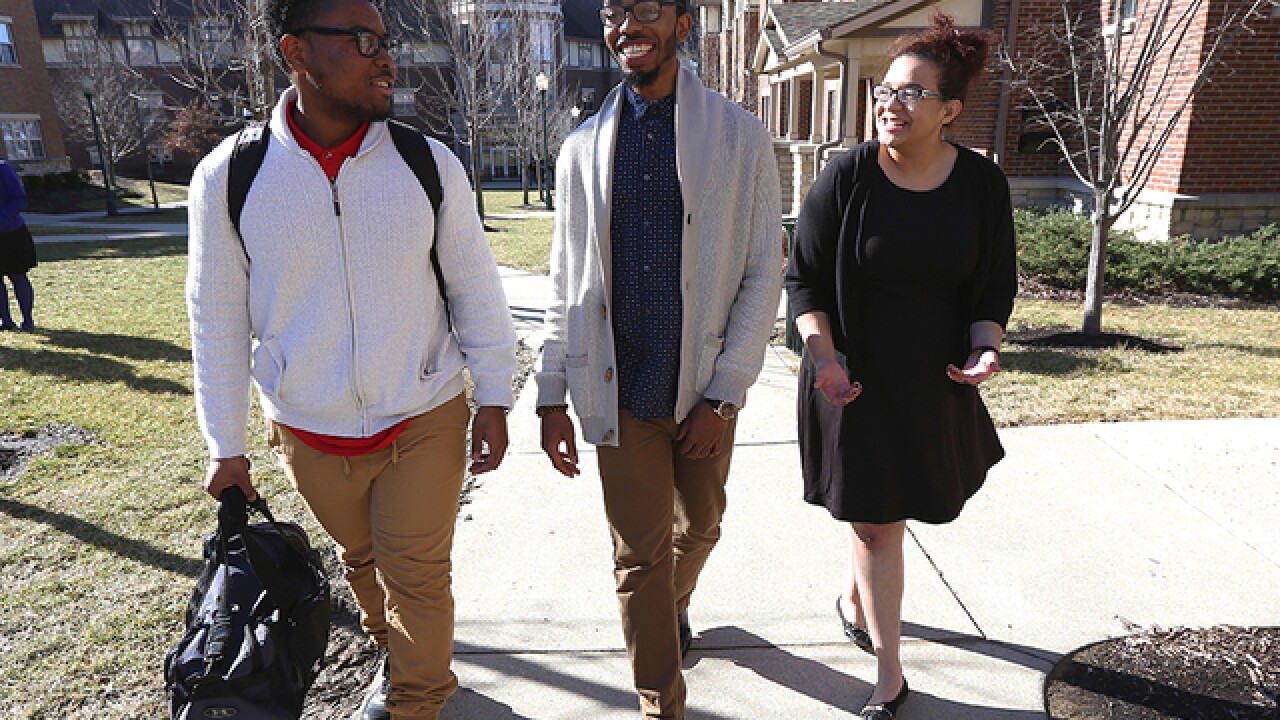 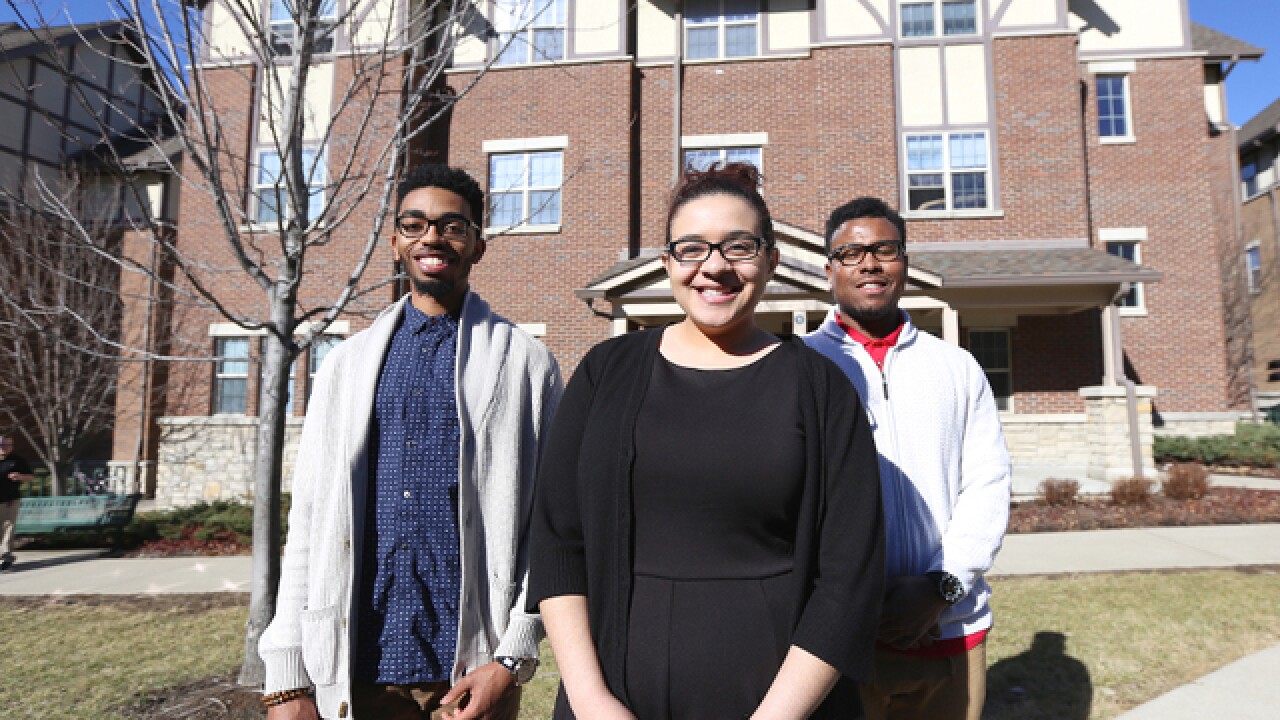 As part of WCPO's ongoing coverage of childhood poverty, we are profiling organizations in other communities that are helping children and families through struggles that people here face, too. This is the first in a series of three stories about what is working elsewhere and what the needs are locally.

CINCINNATI — Jasmine Askins was pretty confident she could get into college. It was paying for it that scared her.

She wasn’t sure what her family could afford. She didn't want to go deep into debt. And the financial aid forms and scholarship applications were daunting.

"My mom and dad, they only know so much," said Jasmine, a 19-year-old sophomore at the University of Cincinnati who is the first in her family to go to college. "There were times when they were like, 'I wish I could help you, but I don't know how to help you. I don't know what to do.'"

It's a problem for thousands of young people across Greater Cincinnati.

One in five kids in the Tri-State — 105,000 children — live below the federal poverty level, according to the latest figures from the U.S. Census Bureau. In the city of Cincinnati, 47.2 percent of all children — more than 30,000 — are poor.

And only about 39 percent of the region's residents have an associate's degree or higher.

That leaves scores of kids living in poverty who are hoping to become the first people in their families to go to college — without parents who can guide them through the complicated financial aid process.

A Boston-based organization called uAspire has been working for the past 30 years to help students in that same situation.

Founded in 1985 as ACCESS, uAspire was created by Boston's business and education leaders to try to help promising, low-income students find an affordable path to get to college, stay in school and graduate.

The organization has helped 60,000 students since its founding. In the last three years alone, uAspire has helped students get more than $250 million in financial aid.

Roughly 83 percent of the students that uAspire serves attend schools with large numbers of students who qualify for free or reduced-price lunch, said Bob Giannino, the organization's CEO.

About 77 percent are the first in their families to go to college, he said.

When working with students and their families, uAspire stresses the importance of applying for financial aid and choosing a college or university that is affordable over the long haul, he said.

"If young people make a good, affordable choice about where they're going to go to college, that will have a direct impact on whether they stay, persist and finish," Giannino said.

UAspire works with roughly 60 Massachusetts high schools in Boston, Springfield and Lawrence. It launched in the San Francisco Bay area in 2013 with help from GreenLight Fund and now works with 11 high schools and one community organization there.

"It's helping students particularly who are coming from backgrounds where they are the first in their family to go to college," Barrett said. "When they are navigating the college process generally, it's an incredibly large task. It's so large that some students just don't enter it."

Other students get accepted to college and have financial aid lined up, but get overwhelmed during the summer between high school and college and never show up on campus.

It's a phenomenon called "summer melt," and uAspire keeps in touch with students over the summer after they graduate from high school to try to prevent that from happening, Giannino said.

"The challenge is that students are no longer in the care of high school, and they haven't quite become in the care of their college," he said. "If you don't have some kind of bridge to support you over the summer through those processes, you might not get there."

In addition to funding from GreenLight Fund, uAspire gets grants from private foundations and corporations and won a grant from the federal government to support its work. It also sometimes charges schools and community organizations for the uAspire counselors that work with students there, and that contributes a bit to the organization's $7 million annual budget. But uAspire never charges students or families.

Cincinnati used to have a program that offered some of the same services that uAspire does, but the federal grant that funded the program ran out last year.

'People Just Didn't Believe In Us'

The local program, called GEARUP, did more than help students and their parents fill out the Free Application for Federal Student Aid, or FAFSA. But that was an important part of its mission, said Lawrence Johnson, dean of UC's College of Education.

"The completing of the FAFSA and all that is a real burden to kids, especially if they have parents that never went to college or parents who have mixed sources of income or not very reliable sources," Johnson said.

Askins, who grew up in Lower Price Hill before moving to Westwood, said GEARUP was a huge help to her during her final years at Gilbert A. Dater High School. She graduated from Dater in 2014.

"If it wasn't for GEARUP, I honestly don't think I would be sitting here talking to you right now," she said. "Growing up in the neighborhood that I grew up in and at my elementary school, we were told that we weren't going to be anything. People just didn't believe in us as much."

Timothy Berry didn't take part in GEARUP at Withrow University High School before he graduated from there in 2013. But he had a great guidance counselor, he said, and took part in UC's Upward Bound program. That helped expose him to college tours and opportunities.

Berry said he didn't get worried about financing college until sophomore year. That's when some of the scholarships he had received after high school graduation disappeared because they were only for one year.

The Gen-1 House at UC, a program for first-generation college students where Askins and Berry live, helped Berry navigate that second year of financial aid forms and applications.

"I have had to take out very minimal loans," said Berry, a third-year sociology major at UC.

Then there's Dominique Jackson, a third-year communications major who also lives at UC's Gen-1 House. Jackson said his guidance counselors at Taft Information Technology High School were a big help when it was time for him to apply for colleges and financial aid. He also took part in a program called GRAD Cincinnati, aimed at helping urban youth be more successful in school.

But even without those programs, Jackson said he's confident he would have found his way.

"I just said to myself I was going to go to school with a full ride and that I was just going to bust my butt and apply for all the scholarships I could get," he said. "I wound up graduating and got a full ride here."

Not every first-generation college student has the drive that Jackson does.

That's why GEARUP was so important in Cincinnati Public Schools and why other schools have AmeriCorps volunteers who help students and their parents with the FAFSA. It's also why staff at UC's Gen-1 House keep helping with financial aid even after students get to college, said Suzette Combs, UC's director of Gen-1 and Cincinnati Pride Grant programs.

"Students' financial situations change," Combs said. "One year they may be eligible for a grant, then not the next year. It's helping them come up with a plan."

UC's Gen-1 House has 90 residents who get substantial help with room and board. To live there, all the students must be eligible for federal Pell grants, Combs said. Most people who get Pell grants have family incomes that are at or a few thousand dollars above the federal poverty threshold. That threshold was $24,250 per year for a family of four in 2015.

The students accepted into the Gen-1 House also get Cincinnati Pride grants, which take into account all the grants a student receives and cover the remaining cost of tuition.

"Once they're selected into Gen-1, we do a lot of work to make sure financial aid is in place for being here in the fall," Combs said.

But the Gen-1 House doesn't have the staff to work with potential students during their high school years, which is what GEARUP used to do.

To help fill the gap that GEARUP left behind, UC is working to launch another program called UC Scholars Academy that would work with children in sixth and seventh grades and then continue to provide services when they get to Hughes STEM High School, Johnson said.

In a separate effort, United Way of Greater Cincinnati and the StrivePartnership have created Team FAFSA.

Team FAFSA, which is new this year, has been hosting events to help parents fill out the complex federal financial aid application at the same time they get help filling out their income taxes from United Way volunteers.

United Way and StrivePartnership created the program after realizing that one of parents' biggest barriers to filling out the FAFSA was the income tax information that the application requires, said Vivien Carter, United Way's community impact education director.

The United Way has offered free tax preparation sites for low-income families for years, and the agency realized that the FAFSA work could become part of the mix, she said.

Team FAFSA will have events at various schools and community organizations through the end of February, Carter said. United Way and StrivePartnership will be able to gauge whether those events helped more families fill out the FAFSA than in previous years for the schools that participate.

Carter knows there is room for improvement. In 2013, Ohio students left $101.3 million in federal financial aid unclaimed. In Kentucky, the total left unclaimed was $40.6 million that same year.

The question is whether the region can help its most needy, college-bound students chart an affordable path to college without an organization such as uAspire whose mission it is to do that.

After all, Berry said, a lot of his classmates at Withrow couldn't even afford the college application fee of $50.

"Their only meals are the breakfast and lunch at the schools, so how do you expect them to afford the application?" he said.

Berry himself felt fortunate that the former director of the Gen-1 House could help him get a waiver for a $100 non-refundable deposit to save a spot on UC's main campus.