Bearcats are No. 2 in the country in field goal percentage defense and here's why it matters 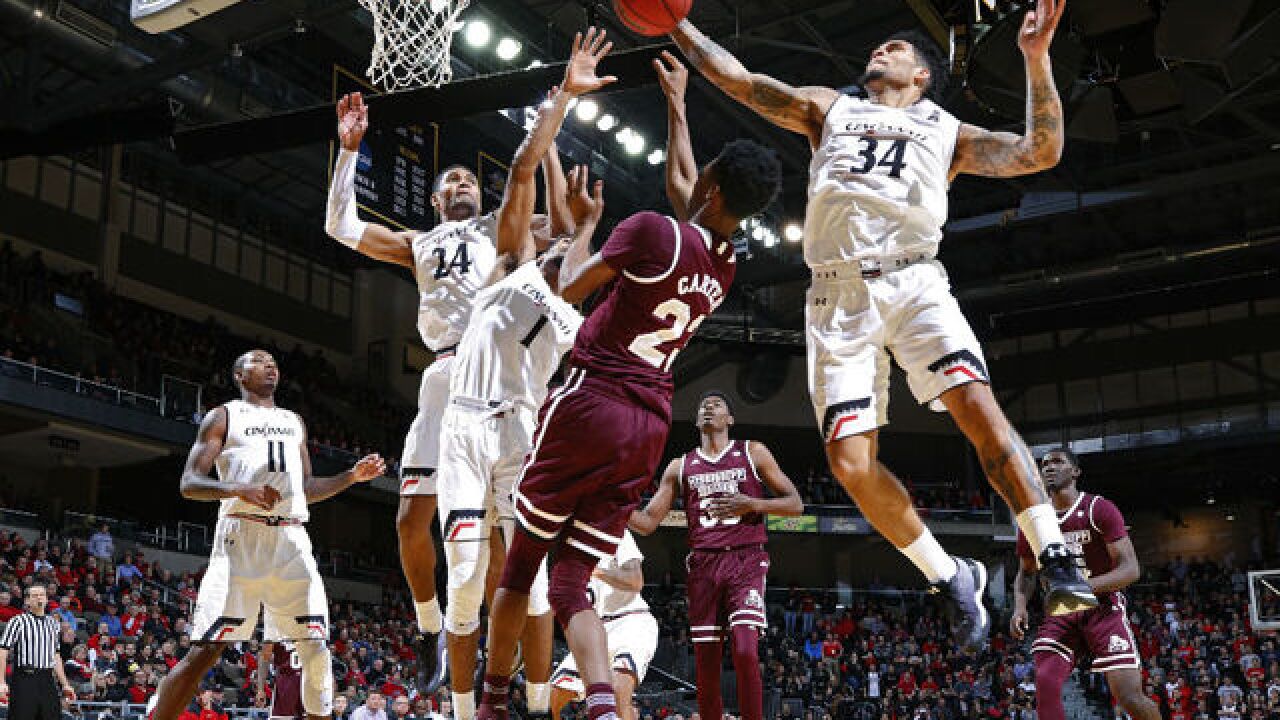 Image copyright 2017 Getty Images. All rights reserved. This material may not be published, broadcast, rewritten, or redistributed.
Joe Robbins | Getty Images
<p>Jarron Cumberland #34 and Kyle Washington #24 of the Cincinnati Bearcats defend against Tyson Carter #23 of the Mississippi State Bulldogs in the second half of a game at BB&T Arena on December 12, 2017 in Highland Heights, Kentucky. Cincinnati won 65-50. (Joe Robbins/Getty Images)</p>

CINCINNATI -- It's pretty simple in basketball -- if your opponent can't get clean looks or easy layups and is forced into turning over the ball, there's a good chance you're going to win.

That’s why field-goal percentage defense has been such a key stat for the Cincinnati Bearcats.

Coach Mick Cronin’s squads have always been known for their stingy defense, but the ability to protect the lane and tie up the opponents’ best shooters has a lot to do with the No. 6-ranked Bearcats’ success over the years and especially through a 22-2 start this season.

UC ranks second nationally in scoring defense while allowing 56.1 points per game, but the Bearcats have been in the top 25 of that category the past five years and six of the last seven years during the team’s current streak of NCAA tournament appearances.

Their field-goal percentage defense also has ranked among the top 20 the past five years, staying under 40 percent each season, but that’s an area that just seems to be getting better and better. UC ranked 13th at 39.3 percent in 2015-16, ninth at 38.3 percent last season and second currently at 36.3 percent.

Additionally, KenPom.com ranks UC second in adjusted defensive efficiency at .856 points per defensive possession, which is on pace to become the second-best in KenPom.com metrics dating back to 2002. The Bearcats have been in the top 22 of those ratings for eight straight seasons.

“It's one of those things where when I first got here we struggled,” senior forward Gary Clark said. “Teams were scoring well, and coach would write on the board at halftime what teams were shooting against us. You can't let a team, at home especially, shoot over 50 percent. That's just one of the things we’ve taken a lot of pride in these past few years is locking teams down.”

UC gets it done defensively in different ways, playing a variety of matchup zones and man-to-man defenses with occasional full-court pressure. While trying to prevent layups, the Bearcats have been solid at the rim, ranking 12th in blocked shots at 5.6 per game, and they’ve displayed great help defense to shut down top scorers.

Perhaps the best example of how UC wants to play on defense came Tuesday in a 77-40 win over Central Florida.

The Knights made just five field goals on 19.2 percent shooting in the first half, including missing 14 shots in a row at one point, and finished with a 28.3 percentage for the game. Cincinnati didn’t allow a single 3-pointer in 14 attempts and surrendered a mere 18 points in the paint, while effectively trying to force UCF into long-range jump shots.

“We're locked in, paying attention to detail,” point guard Justin Jenifer said. “Every day we come in and make sure we're focused on playing defense first because we know if we do that, everything will flow for us on offense.”

It helps having some of the nation’s top individual defenders.

Clark, the American Athletic Conference Defensive Player of the Year in 2015-16, anchors the team as a player who can defend all five positions. The 6-foot-8 power forward ranks No. 1 nationally among individuals in BasketballReference.com’s defensive ratings at 77.8 points allowed per 100 possessions, and four others are in the top 20.

Cronin said he doesn’t recruit based on defense, though.

“We get the best guys we can get and then try to win with them -- we don't recruit with defense in mind,” Cronin said. “You've got to get talent and then you can coach defense.”

That line of thinking comes from being around coaches like Bob Huggins, for whom he assisted from 1996 to 2001, and Rick Pitino, for whom he coached under at Louisville from 2001 to 2003. It even goes back to watching his dad, Hep Cronin, who coached him at LaSalle High School.

Cronin said it takes certain kinds of players to be able to coach a team into great defenders.

“It comes from schemes and scouting, but you've got to get players that want to win and care about winning,” Cronin said. “We talk about, 'Is this guy a competitor?' and once you're winning and have a winning culture, when you're in my position and your assistants are presenting different recruits to you all the time, you have to try to ascertain whether the guy is going to care about winning when he gets to our program or is he just going to care about his individual statistics.”

Another secret to success on defense is trying to keep the team experienced, Cronin said, because young players haven’t learned the difference between aggressiveness and over-defending or fouling at this level yet.

It generally takes two years for players to learn how to defend on and off the ball at a high level, he said.

“We have techniques we try to teach, and we drill it,” Cronin said. “It's repetition, and you review it on film. You show them what works and what the referees call and don't call when it comes to fouling.”

Clark doesn’t doubt that he is a better defender because of his decision to play at UC. He knew Cronin was a defensive-minded coach when he signed with the Bearcats straight off Tobacco Road in Clayton, North Carolina.

“That's huge because the last couple years we didn't score as well as we are now, so we had to go back to that. It keeps you in the game. If you aren't scoring, but they aren't scoring and they’re struggling with their shooting because of how you’re defending, you've still got a pretty good chance.”