Back of the House: For a unique dining experience, try the omakase menu at Ando 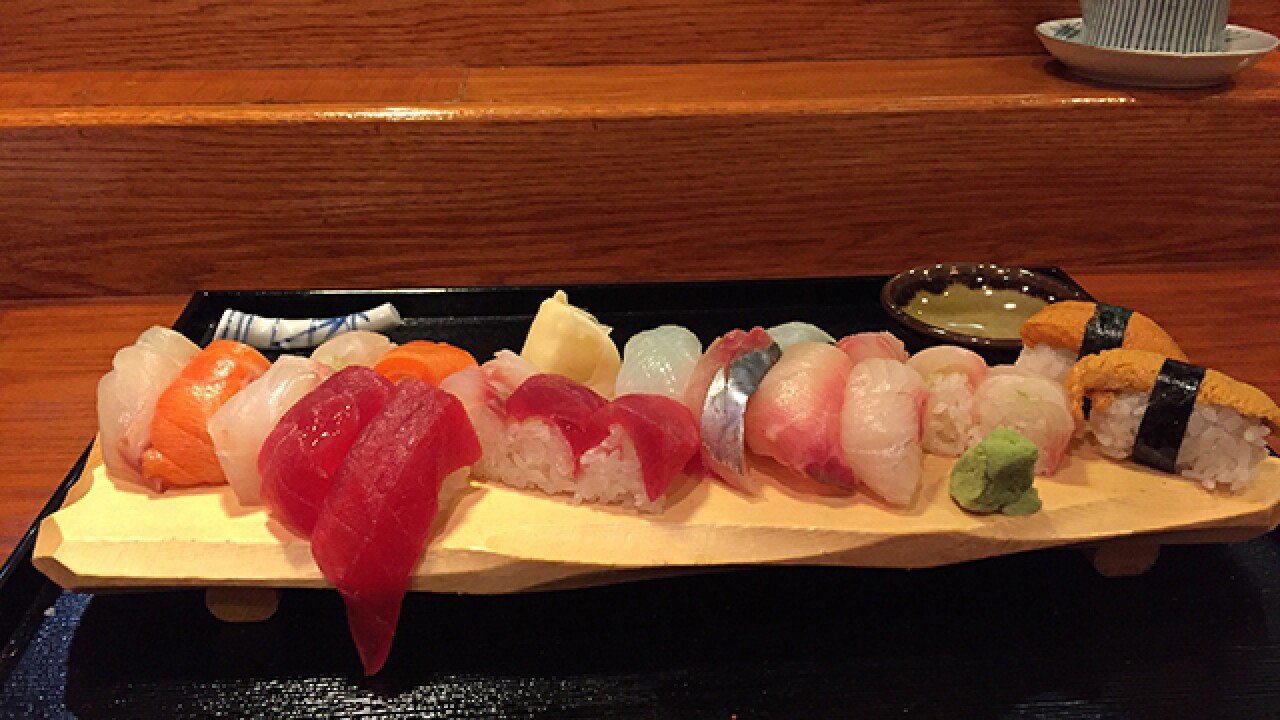 Copyright 2018 Scripps Media, Inc. All rights reserved. This material may not be published, broadcast, rewritten, or redistributed.
Provided
<p>While the sushi chefs at Ando will graciously whip up California rolls (as well as plenty of chicken teriyaki for your toddler), the omakase menu is for more adventurous souls who are interested primarily in the fish.</p>

CINCINNATI -- Back of the house -- it's restaurant speak for "behind the scenes," typically referring to the kitchen and the cooks who toil there.

By design, many diners will never interact with the chef at their neighborhood pizza place or chain steak house. Most restaurant dinners are designed for the ease and efficiency of both the customer and the kitchen crew and offer little chance to connect.

But sometimes we all crave a little more authenticity from our food and the actual experience of dining. Enter the Japanese omakase menu.

Often lumped in with the French concept of prix fixe (a multi-course dinner served at a fixed price), the omakase experience is slightly different. It involves completely ceding control of the ordering process and letting the chef choose your dinner.

Some omakase dinners are over-the-top, super-spendy bacchanals that provide the chance to nibble on a dizzyingly exotic selection of seafood.

I can't help but remember an omakase dinner that longtime Vogue food editor Jeffrey Steingarten recounted in that magazine's pages in Sept. 2016. It included an ice-cold Kumamoto oyster with chopped apple, a square of mochi with green pistachio miso, sea scallop sashimi with baby spring vegetables, glistening toro nigiri, and translucent strips of raw trout garnished with its own grilled skin.

Although my recent dinner at Ken and Keiko Ando's eponymous Blue Ash restaurant thankfully didn't push my bill into the economic stratosphere quite as Steingarten's did, it was an ideal opportunity to sample some of the freshest fish available in these parts, sourced primarily from vendors in Japan.

The sushi chefs at Ando will graciously whip up California rolls until the cows come home, but the omakase menu is for more adventurous souls who are interested primarily in fish instead of heavy garnishes such as think spicy mayo. Ando currently offers omakase nigiri dinners (slices of fish served atop seasoned rice), sashimi dinners (sliced fish minus the rice), and sashimi appetizer options. All assortments are ordered from a handwritten menu (listed in both Japanese and English) and sold at market price.

Although omakase can be ordered from any table or even to go, I highly suggest doing so from the sushi bar, where one has a front-row seat for the oh-so-precise knife skills involved.

Last week at Ando, my son and I split a $50 omakase nigiri dinner. Our selection included mostly Japanese fish, such as yellow jack, horse mackerel, amber jack, red snapper, rudder fish and sea squid, as well as Brazilian fatty tuna, Icelandic Arctic char and Californian sea urchin. The presentation was spare and elegant, garnished only with house pickled ginger and wasabi. The squid was layered with small squares of shiso, a leaf that tastes like a cross between mint and basil.

I should probably mention that my son is almost 7 and has been eating his own weight in avocado rolls since he could sit up. Being of the more selfish maternal persuasion, I strictly subscribe to the dinner dictum passed down by my own mother -- take it or leave it. Naturally, neither of us looks like we've missed a meal, and so I felt confident that he would enjoy the novelty.

If your dining companion expresses some trepidation, feel free to order a few approachable rolls to temper the excitement or one of Ando's more accessible appetizers such as tempura vegetables or pork pot stickers.

As you are putting your dining experience in the hands of a well-seasoned professional, expect some dialogue. Ken Ando confirmed that we both liked wasabi before putting a small amount between each piece of fish and the seasoned rice. Then he offered to slice the nigiri assortment in half so that we could sample a piece of each.

His sushi apprentice was also quite friendly and answered many of our questions about cleaning and seasoning the salmon roe that was ordered by another guest. Sitting at the sushi bar adds much to the omakase excitement.

A note on uni, the reproductive glands of a sea urchin: If you've been thinking of trying it, make sure you order it at a restaurant that sources the sea urchins whole and alive, like Ando.

I didn't grow up eating sushi, oysters or anything remotely undercooked. I first tasted uni when I was 23 and working as a line cook at Maisonette. Like your first oyster on the half shell, the bold brininess of any living sea creature hits your palate like a saline-spiked sucker punch. For my son, it was no different, and all manner of outside voice ensued as he marveled at how much it "tasted just like the ocean."

We're leaving the sex organ explanation for another year.