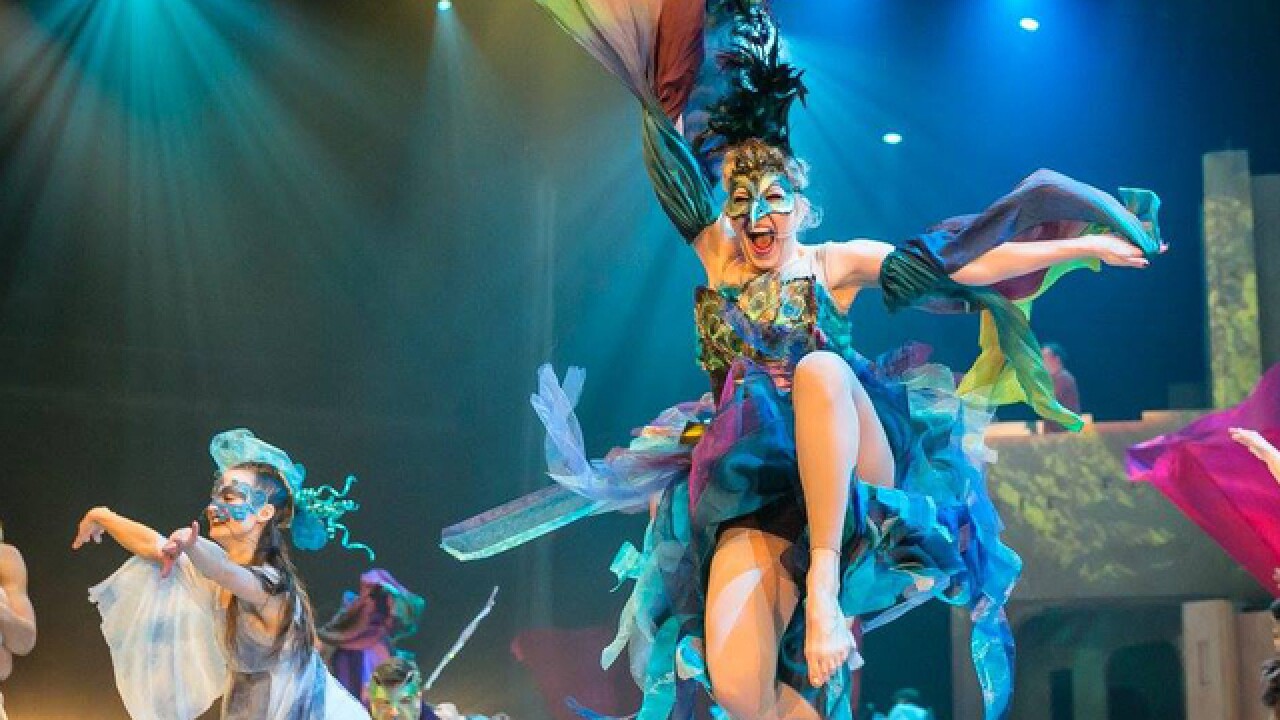 Copyright 2017 Scripps Media, Inc. All rights reserved. This material may not be published, broadcast, rewritten, or redistributed.
Jim Gormley Photography
<p>Rachel Perrin, dressed as a peacock, dances in the "Alive" number of Crossroads' "Awaited" musical.</p>

CINCINNATI -- The hottest ticket in the Tri-State? It could be for "Awaited," a musical Christmas pageant at Crossroads Church.

On Oct. 29, Crossroads Senior Pastor Brian Tome announced that 2017, the show's 11th year, would be the last for "Awaited."

With more than 20,000 weekend attendees, Crossroads is the region's largest church. It has 14 campuses in Ohio and Kentucky, but through its Crossroads Anywhere program, small groups meet weekly across the country to participate in a livestream of worship services.

"We need to put our limited resources toward a different Christmas experience that everyone who is part of Crossroads can participate in," Tome wrote in an email to church members.

The announcement saddened the 400 members of the cast and crew, about two-thirds of them volunteers, some of whom have participated every year since the pageant began in 2007.

"It was a really hard decision," said Paula Rakestraw, the show's co-creator, producer and choreographer. "We love ‘Awaited' in Cincinnati. It's not something we stopped because it was not working. … It is a blessing for the city."

Rakestraw, who works full time on "Awaited" as a member of Crossroads' staff, will now put her talents to work devising a Christmas experience for families that they can experience anywhere.

It costs about $1 million a year to produce the shows, which take place at Oakley and at the Mason campus.

More than 100,000 people are expected to see at least one of the 47 performances during Advent. Tickets, which are free, are already sold out for every performance.

Before Monday's performance at Crossroads' main campus in Oakley, campus Pastor Chuck Mingo asked everyone already seated to move forward to make room for the hundreds of people waiting to see the play who didn't have tickets.

He asked parents to keep their children out of the aisles, but not to worry about them making noise. "Our sound system will win every time," he said, and he was right. Most of the musical numbers were really loud with lots of drums.

The show presents an abbreviated version of the Bible story: God creates people, people rebel against God, God sends his son, born as a human being, to reconcile God and people. It's told from the point of view of angels, some of them depicted as projections on huge banners around the stage.

Pigskin in the manger

The show in Oakley on Dec. 4 opened with Norwood resident Courtney Walton walking down an aisle, carrying a lantern on a stick and singing the hymn, "O Come, O Come Emanuel." The ancient carol would be repeated several times during the production.

It's the seventh year Walton has performed in "Awaited." It's an opportunity to use her talents to make something beautiful, she said, but also to tell the story of Jesus to people who might not have heard it.

The production is filled with ballet- and Broadway-style dancing. One scene, which includes East Walnut Hills resident Rachel Perin dancing in peacock costume, shows life awakening in the Garden of Eden. By the end of this year, Perin, the show's dance captain, who makes a living in regional musical theater, will have done 150 performances of "Awaited."

At one point, dancers huddle around a spot on the stage, then step away to reveal Mary, Joseph and a manger. West Chester resident Susan Jung, the show's assistant director and Rakestraw's sister, devised that bit of theatrical magic.

(By the way, that's no baby doll in the manager, but a football, she said. It was on hand during the original production, when something was needed to give the manger weight, and it's stayed since.)

She'll miss creating stories for the production with her sister, she said, just as they used to do in their backyard as children, but she's also looking forward to spending December with her family. Her 10-year-old hasn't experienced many of Cincinnati's other Christmas events.

During "Silent Night," soap bubbles that look like snow fall on the audience, and that's a favorite moment for Walton. "It's so sweet, every single time, to hear kids literally be in awe and wonder," she said.

The show ends with the entire cast singing "O Come All Ye Faithful" with the audience, a moment that melts Perin's heart every time.

"I keep thinking, ‘When is it going to feel old?' But it never does," she said. "It feels special every night."

Just before the end, Mingo comes onto the stage and drops the chains he put around himself at the beginning. He then asks anyone who would like to follow Jesus to pray along with him. It's the "Awaited" version of the traditional Protestant call to the altar.

After tragedy, show grows even larger

Many people who now regularly attend Crossroads tell the staff that they first came through the doors for "Awaited," Rakestraw said.

That evangelical mission has kept Western Hills resident Claudia Kozak singing in the "Awaited" choir for nine years. "I've loved being part of something bigger than myself," she said.

She's also loved making friends like Anderson Township resident Cheryl Jacobs and Madisonville resident Pat Sullivan, both of whom have sung in the "Awaited" choir from its inception.

They were there the night in 2008 when 23-year-old Keri Shryock fell to her death when her aerial harness failed. The rest of the year's performances were canceled, but they resumed in 2009 when her family said she would have wanted them to continue.

The church staff walked the congregation through the tragedy with honesty and openness, and without trite answers, Sullivan said. She thinks that because of how the church handled it, the production was able to blossom and grow. "I think those were some good seeds sewn that year."

For Jacobs, who grew up singing in her church choir, it's been great to have "Awaited" to sing in. Crossroads doesn't have a choir that regularly sings at worship services.

The Bible says that there are seasons for things -- for example, a time to sow and a time to reap, Sullivan said -- and the season for Awaited is drawing to a close.

"We will forever be thankful that we were a part of it," she said.