At these martial arts studios, you won't win a trophy, but you'll win some valuable skills 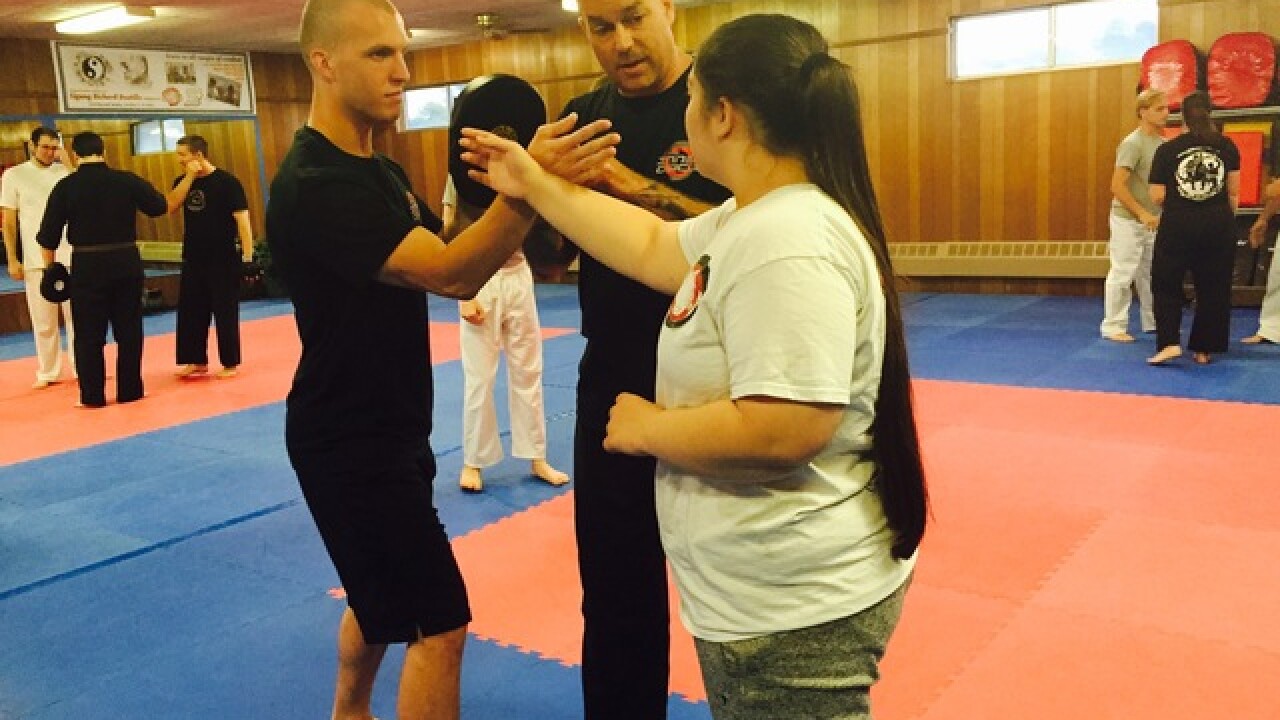 Vickie Ashwill | WCPO contributor
<p>Michael Peterson, center, helps show a student a self-defense technique. At left is Trace Bradley, who is working with Maya Arquines, both of Florence.</p>

FLORENCE, Ky. -- A dozen people who showed up recently for a Bruce Lee-style self-defense training class came for a variety of reasons.

Oh, and self-defense, said another -- just in case.

That's what Maya Arquines, of Florence, said she's gained from her training experience.

She's been training for a year, and she feels both physically and mentally stronger.

Michael Peterson, owner and master instructor at The Inner Circle Defensive Arts in Florence, said he teaches students the Bruce Lee philosophy, "to practice the style of fighting without fighting."

He said Lee, a famous martial artist and actor, said it was always best to avoid a conflict and not have to fight. But if you have to fight, focus on techniques that are quick and to the point.

The Bruce Lee training, called Jeet Kune Do, offers students the ability to make it their own by teaching and practicing lots of techniques, said Peterson.

Jeet Kune Do features minimal movements with maximum effects and extreme speed. The actions vary depending on the situation.

While most martial arts studios work with students who want to compete and win trophies, Peterson's approach to his business is less about money and more about helping others be prepared in case of an attack, especially women.

Peterson said he grew up in the Los Angeles area before his mother was transferred to Cincinnati for a job.

"Most of the women in my family have been assaulted, robbed or raped," Peterson said.

He started his martial arts career at 14, doing competitions like most kids engaged in martial arts.

"Competitions are where the money is," Peterson said. "I'm not doing this for the money but to help others."

He said he's watched other martial arts businesses in the Florence, Erlanger and Elsmere area fail while his 13-year business continues to grow. Inner Circle has about 60 members and offers a basic monthly fee of $125 without a contract.

Peterson has just moved into his fourth space on Burlington Highway across from Boone County High School. And he hopes it's his last. He also hopes to buy the building, a 6,000-square-foot structure (up from his original 900-square-foot-space) with training space on two levels.

His students range in age from 5 to 67, some in shape and some not so, and come from all over Cincinnati and Northern Kentucky. Peterson wants all of them to be able to stand up for themselves.

He has a hard time knowing how and if his training has been used, he said, but there have been moments. A parent once told him their young son had managed to get out of a bullying situation at school and that no one has bothered the boy since.

One of the young teachers on his staff is another success story.

"Michael is always telling us 'I want you to be able to handle yourself in a conflict, but I hope you never have to,'" Collins said.

Collins, 21, said it made him confident enough to join the National Guard at 18, something he never thought he could do.

Inner Circle offers a variety of self-defense instruction and is affiliated with IMB (International Martial Arts and Boxing). Peterson is proud of his lineage, his direct line of teachers. His instructor, Richard Bustillo, was a student of Lee.

It's one of his toughest classes, where endurance and strength count, and probably his most popular, he said.

Another Krav Maga training center is also open in Blue Ash. Leibel Mangel, head instructor at Cincinnati Krav Maga there, got his training while in the Israel Defense Forces.

Mangel teaches Krav Maga Malay, which differs from what Peterson teaches, though they are related. Mangel noted its growing popularity in North America, following a trend in Europe.

Like Inner Circle, members don't participate in tournaments there but focus on self defense. Also like Inner Circle, the students come for many different reasons including self-defense training, exercise or just to let off steam, Mangel said.

For Peterson, who wants to empower and protect his students, it's important to stick with self-defense training -- and it's personal.

When he's instilled in his students both self-defense tools and confidence, he says, "I feel like I have accomplished something at the end of the day."