At the Zoo Academy, high school students get a hands-on jump-start to zoo-related careers 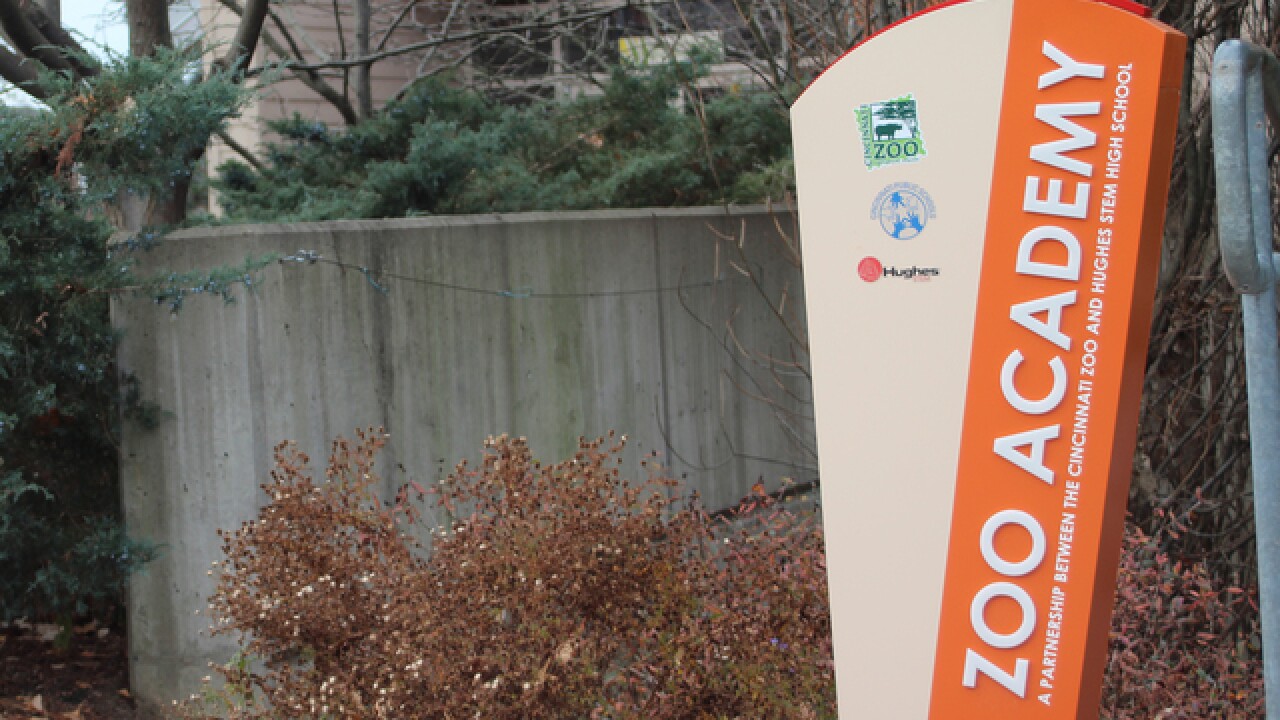 CINCINNATI -- It's just past 8 a.m. when high school senior Trenet'  Schill walks to her first class. While traditional students may be heading to English, math or science, Schill is off to the Reptile House at the Cincinnati Zoo to prepare breakfast for its non-venomous residents.

"In the morning I like to make sure everyone's accounted for," she said. "I also report if anyone's shed or gone to the bathroom. Then I work on their diets."

While it may seem like an unusual start to the day, the experience is part of the Cincinnati Zoo Academy, where students spend their junior and senior years focusing on careers associated with animal care, horticulture, commissary, maintenance and administrative management.

While the program is affiliated with Hughes High School, applications for enrollment are open to all Ohio resident high school students.

"Everyone at Hughes keeps telling me, 'We're tired of seeing all the animals that you always work with,' " Schill joked. "I just tell them, 'I'm sorry you're in the classroom all day.' "

In addition to regular classes, students take 18 to 20 different labs at the zoo and offsite at Newport Aquarium, Gabriel's Place, and Rover the Rhine.

"The goal is to try to get them ready to work in a zoo, and since only about 40 percent of the people at the zoo work with the animals directly, there's other jobs here that people don't realize," Zoo Academy teacher and former keeper Chris Edelen explained. "One of my big things is getting these kids into some of those areas. We're trying to get them to figure out what gifts they have and how they can use them."

Edelen believes the Zoo Academy, established in 1975,  is the oldest of its kind in the country. Housed in the Procter & Gamble Education Center, he said it's the only facility to offer both labs and regular academic classes on grounds. He said graduates have gone on to work at the Cincinnati Zoo as well as zoos around the world.

"We have 21 or 22 staff members and keepers here who graduated from the Zoo Academy," he said. "We've got head keepers, curators, office managers, team leaders. So we've got Zoo Zcademy kids in zoos all over the place."

"We have kids at the end of two years who say, 'This is totally what I want to do and now I have all these contacts and experience that nobody else has going into college,' " she said. "And then we have kids that are like, 'That was really cool, but nope I don't want to work with animals,' and they haven't spent all their money at college figuring this out."

Kimmie said those who choose alternate careers still leave inspired by the importance of conservation work. She said that whether students decide to go into careers like cosmetology or private sector business, their actions and product choices will be environmentally conscious. She said every type of profession needs people dedicated to conservation.

"I think every single person needs to know at this critical time that we're losing species drastically and our world is in a pickle right now," she said. "So this curriculum that we're focusing on, environmental science, animal science, plant science -- how we fit into all of this, it's vital for everybody."

When vetting students for the program, Edelen said they're looking for those with a deeper commitment to all aspects of care as opposed to someone who simply likes playing with animals. He said students also must possess a solid GPA, since much of their work is self-directed. He said 20 years ago they were besieged with applicants, but with the advent of streaming sites and social media combined with news outlets' reduction of local coverage, they're gotten lost in the shuffle.

"The problem that we have is no one knows about us anymore," he said. "I contact the local schools and do a lot of promotion through the zoo website or the Facebook page, but I'm tired of hearing, 'Wow, I wish I knew about that when I was in high school.' "

Schill said she heard about the Zoo Academy from her aunt, who's a graduate. Even as a kid, Schill said, she was drawn to nature, spending most of her time outdoors at a nearby park. She said the Zoo Academy not only is helping her fulfill her dream of training animals for those with special needs, but also helped her overcome being awkward around others.

"I used to have real bad anxiety and I stressed out and I hated large crowds," she said. "But now that I'm here I'm not really worried about anything because you know everyone and we all get along. The people I didn't talk to at Hughes, I talk to them more now than I ever did before."

Since the academy is considered an extension of Hughes High School, students can still participate in sports, clubs and other extracurriculars at the main campus. As members of the sponsor school, Edelen said, Hughes students get first acceptance, with the remaining spots filled by students from other high schools.

Currently, he said, the academy has kids enrolled from Clermont County, Mason, Mount Healthy. There's also a student who moved from Michigan and an exchange student from Romania.

"If you come in here and really want to go into animal conservation, that's what we're looking for," he said.

Because of the small classes, he said, teachers and their on- and offsite mentors not only get to know students but also form a bond. Team Leader of the Reptile House Tony Lewis said he normally loves having students in to help - unless they're too afraid to be hands on.

"That really doesn't work out because we have things to do and animals to take care of," he said. "But we have students like Trenet' who don't shy away from anything. I can say, 'Trenet, come over here and help with this alligator' and she's right there."

While Schill's had extensive experience with animals, she takes the greatest pride in work she accomplished during her entrepreneur experience. She and another student raised funds to have the orange and white Zoo Academy sign installed at the front of the building.

"We got the sign at the beginning of this year and it was a complete surprise," she said. "They just showed up with it. We were very excited. It was as simple as having a dream, and then it happened."

The Zoo Academy will accept applications in April. Edelen encourages interested students to apply at https://www.cps-k12.org/enroll.