At Sundry and Vice, the boozy milkshakes range from awe-inspiring to off-the-wall wacky

Part of the fun is watching people attack them 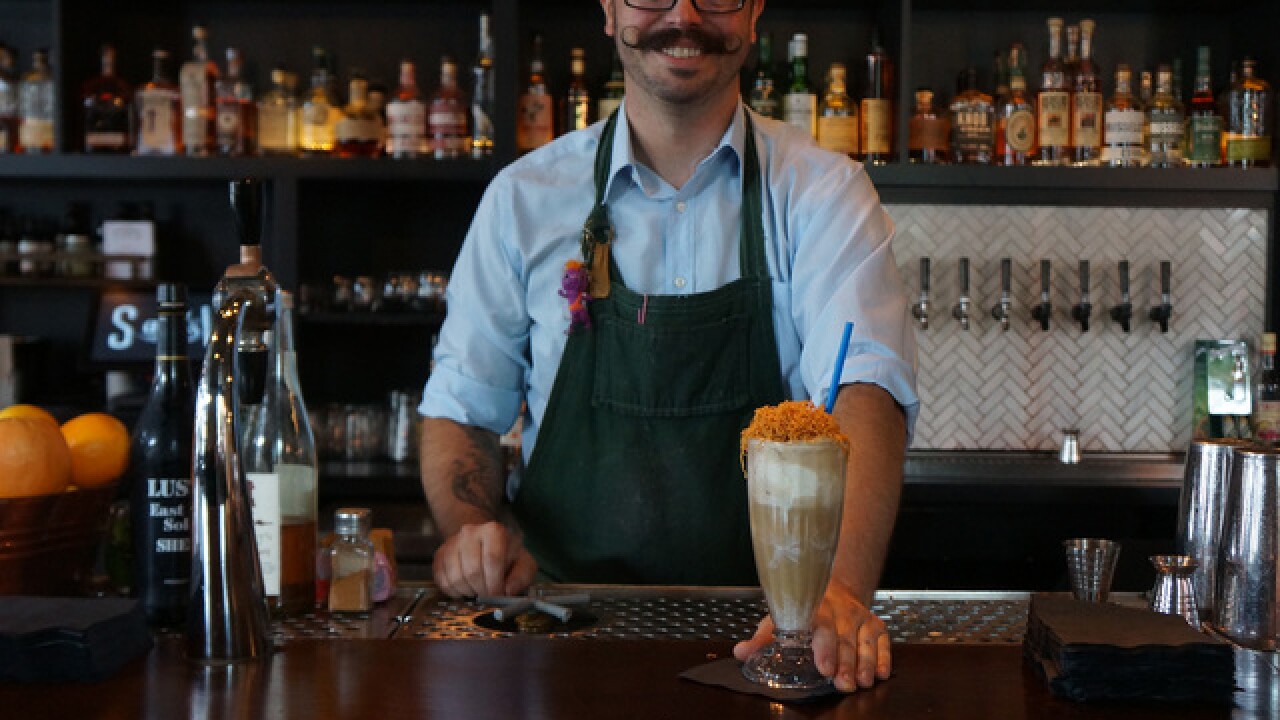 Copyright 2017 Scripps Media, Inc. All rights reserved. This material may not be published, broadcast, rewritten, or redistributed.
Garin Pirnia | WCPO contributor
<p>Scoopologist Giacomo Ciminello creates work-of-art milkshakes, like the Murder in the Dark, a riff on Skyline Chili.</p>

CINCINNATI -- Giacomo Ciminello was 13 years old when he started working at his family's New Jersey ice cream/surf shop, The Boardwalk.

"It's on an island that never had a boardwalk," Ciminello said. "It backfired once or twice -- people showed up asking where the rides were. We don't have any."

In 2011, Ciminello left the beach for Cincinnati, where he worked as an associate creative director at Kaleidoscope. In March 2015, Los Angeles transplants Stuart King and Julia Petiprin opened the Over-the-Rhine cocktail bar Sundry and Vice, and Ciminello applied for a job.

While still living in Los Angeles, the S&V owners had discussed combining alcohol and ice cream.

"We didn't know anything about ice cream," King said. "We knew cocktails. And then all of a sudden this resume comes in. It's sarcastic, urbane and droll. Julia and I looked at each other: We solved our ice cream problem."

They hired Ciminello to oversee their boozy ice cream program, and his awe-inspiring alcoholic shakes supporting S&V's apothecary and pharmacy theme debuted on the menu in July 2015. Though Ciminello no longer eats ice cream, he brought his experiences from the Boardwalk, and as a graphic designer, to the bar.

"We started doing crazy milkshakes there 15 years ago," Ciminello said. "Our staff is all 15 years old, and to keep them occupied, it's like, come up with something silly. They would throw the kitchen sink at the milkshake, and we'd have fun. I bring that here a little bit."

His typical milkshake menu isn't too crazy -- unless you think peanut-infused mezcal is wacky. But on Sundays, when customers have more patience, Ciminello is given the freedom to concoct elaborate milkshakes tied to pop culture, holidays and historical references.

CLICK HERE for photos of his creations or tap the image below:

"We knew the places in New York that basically put a pizza and birthday cake on these things," Ciminello said. "We don't try and go that far -- we try to keep it tasteful."

Adds Petiprin: "He puts more thought into them."

From noon-4 p.m. Saturday and Sunday, S&V offers its weekend brunch cocktail menu, including Bloody Marys and a drink with cold-press coffee and Jameson. Ciminello comes up with the menu, and then the staff tweaks it and suggests changes.

"During the week and in the evenings, we take the cocktails seriously," King said. "But (the shakes) are an opportunity to make this place a little irreverent."

For instance: Last summer Ciminello generated an Instagrammable "Ghostbusters"-paean shake, topped with marshmallows and a Twinkie covered in "slime." He also created a "Top Gun" Day shake, replete with a sparkler and fighter jet that hovered above the rim. This year's Mother's Day shake had a bouquet of flowers stuffed into it.

Once, he attempted a food-based brunch shake: a maple pancake and a plate full of eggs and bacon.

"Two people had to attack it or the whole thing would fall off," he said.

The specialty shakes take about 10 minutes to make and are available in limited quantities; they tend to sell out. On a recent Sunday he presented a Willy Wonka shake in honor of Gene Wilder's birthday. Ciminello said it was one of his most "basic" shakes, but this one had a chocolate mousse cup from Clifton bakery Biagio's Bistro as garnish, alongside colorful pull-and-peel Twizzlers, Hershey bars and a white chocolate-coated rim.

The more standard shakes on the rotating menu begin with scoops of Madagascar vanilla ice cream, and Ciminello builds from there. The new menu consists of the easy-to-drink Murder in the Dark, his riff on Skyline Chili, made with bourbon, creme de cacao, cream sherry, cinnamon and Coke and topped with grated caramel-y Dutch goat milk cheese. Even those who detest Cincinnati chili will like it.

Cat's Cradle blends jalapeno tequila, corn, cumin and ice cream and is topped with whipped cream and cornbread crumble. It's on the menu to complement Sundry & Vice's corn cocktail, Corn Maze. Surprisingly, the flavors work well together -- an amalgam of sweet and savory.

The bar also offers a Fromosa, a mimosa with an Italian ice stick dipped in.

"It's sort of Streetpops-style where they take weird flavors and infuse it," Ciminello said. "We're a little on the sweeter side here."

Flavors come in Thai pepper, Asian pear and salted caramel; chocolate, orange and dill; and kiwi, apple and rose. He laments the lack of Italian ice in town, which is why it's on the menu. The frozen -- hence the name Fromosa -- sticks are staged in a wine glass and doused with Prosecco.

"What I love about the artsy milkshakes, and these are, there's an interactive element to them," Ciminello said. "You watch people deconstruct it. I like to watch people attack these things."

For those who want all the benefits of a boozy shake without the high-calorie content, they can add a Buoy to a cocktail -- a scoop of ice cream -- for an extra $2.

Sometimes it's challenging for Ciminello to dream up new milkshakes -- he doesn't want to repeat himself.

"In my design career, I want to one-up each project," he said. "So every week you're trying to better yourself. That definitely comes into the shakes. I almost get anxiety on Friday, because it's like I did this three months ago and I can't do it again. You try to add a twist or a nuance to it to make it better, or try something different."

His current white whale is a Thanksgiving dinner shake, which he has been trying to perfect for a while.

His ultimate fail was an ill-received Cinco de Mayo Choco Taco/Cool Ranch Doritos shake. But even the worst shake is still edible.

"If it's going to taste weird, I'll at least give you a cupcake or something to wash it down with," he joked.