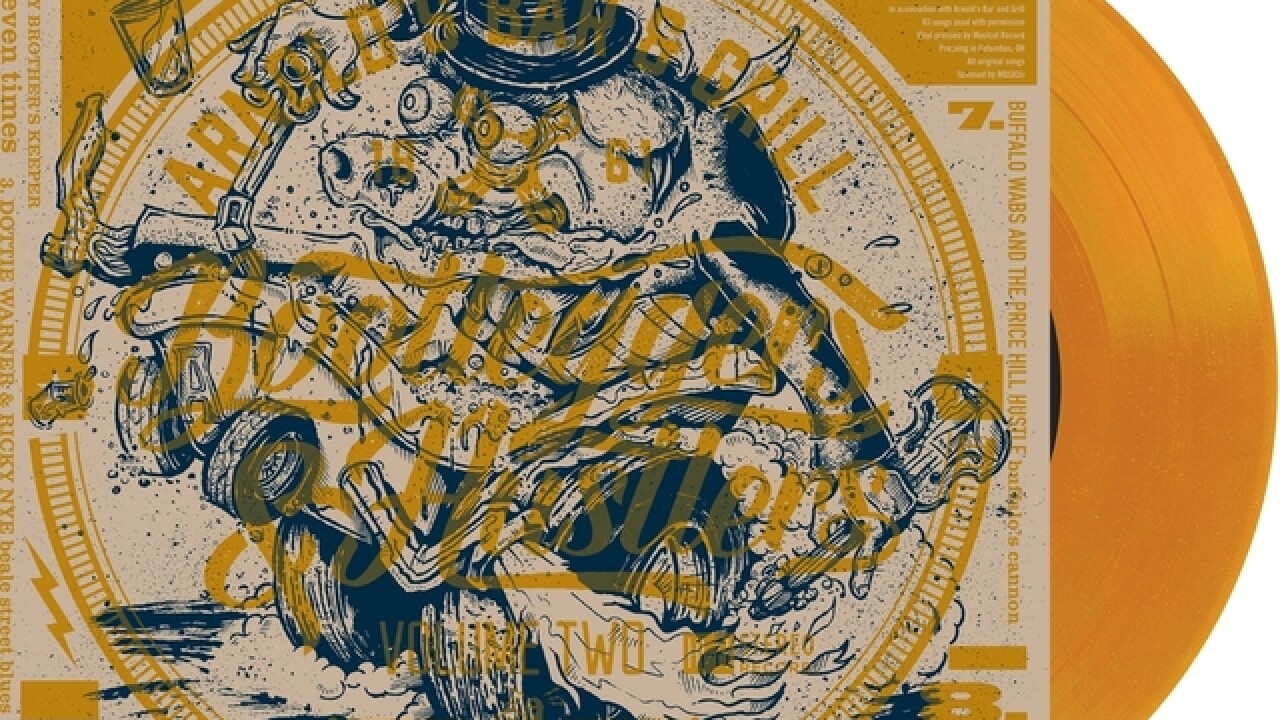 <p>Arnold's Bar & Grill will release "Bootlegers & Hustlers Vol. 2" on National Record Store Day, which is April 16 this year. 400 copies of the orange edition of the album will be sold at local record shops. 100 copies of a rare clear version of the record will be sold as well. (Image courtesy Arnold's and Neltner Small Batch)</p>

CINCINNATI — Chris Breeden knows it didn't make sense when Arnold’s Bar & Grill got into the record-making business last year, producing 300 copies of “Bootleggers and Hustlers Vol. 1,” a collection of songs from local musicians who regularly play at the bar.

“We don’t always necessarily do things that make sense,” said Breeden, who is general manager of Arnold's. “We just do things we want to do."

What might make even less sense is that Arnold’s has decided to produce a second volume of music this year, even though sales of the first barely made enough money to cover production expenses. (The first album did, however, sell out within five hours at local record shops on last year's Record Store Day.)

“Vinyl is not inexpensive to produce,” said Keith Neltner, who owns a branding studio in Northern Kentucky and collaborated with Breeden on both albums. “It’s absolutely a labor of love.”

Neltner was one of the first people Breeden contacted last year when he came up with the idea for “Bootleggers & Hustlers.” Breeden, who is also an artist and photographer, told Neltner he felt it was a waste not to utilize the musicians and other people he had connected with through the bar. Plus “it just seemed like fun to put out records,” he said.

Neltner, who has worked on various projects for Arnold’s over the past five years, understood. He also has a background in the music industry. Starting in 1998, he began designing album cover art for musicians such as Hank Williams III. He is currently partnered with Shooter Jennings, son of country music legend Waylon Jennings.

To assist with Breeden’s project, Neltner utilized his Neltner Small Batch Records to gather local musicians and produce the records.

“Chris is always pushing the creativity in the city,” Neltner said. “I also think that music and Arnold’s go hand in hand. It was kind of a no-brainer.”

“He’s a gangster pig, hanging out in this tub,” Neltner said of this year’s design. “What is cool about it is I believe vinyl actually brings artwork back to the forefront. This brings it back to the ‘olden days’ when there was a kind of experience when buying a record.”

“It’s a really cool mix, almost like a tasting of the Cincinnati/Midwest music scene,” Neltner said. “The common thread there is Arnold’s.”

Otto’s Printing in Newport is printing the album cover again this year, and a Columbus-based company has been contracted to press the vinyl. Arnold’s staff will bag the records and put them into sleeves before they are shipped to local record stores for sale on April 16.

“Everything is donated in the record,” Breeden said. “You don’t make money off of it, but everyone gets to do something awesome, so it pays off that way. It’s totally worth it because it is super cool.”