Are local police departments underreporting their use of force incidents? 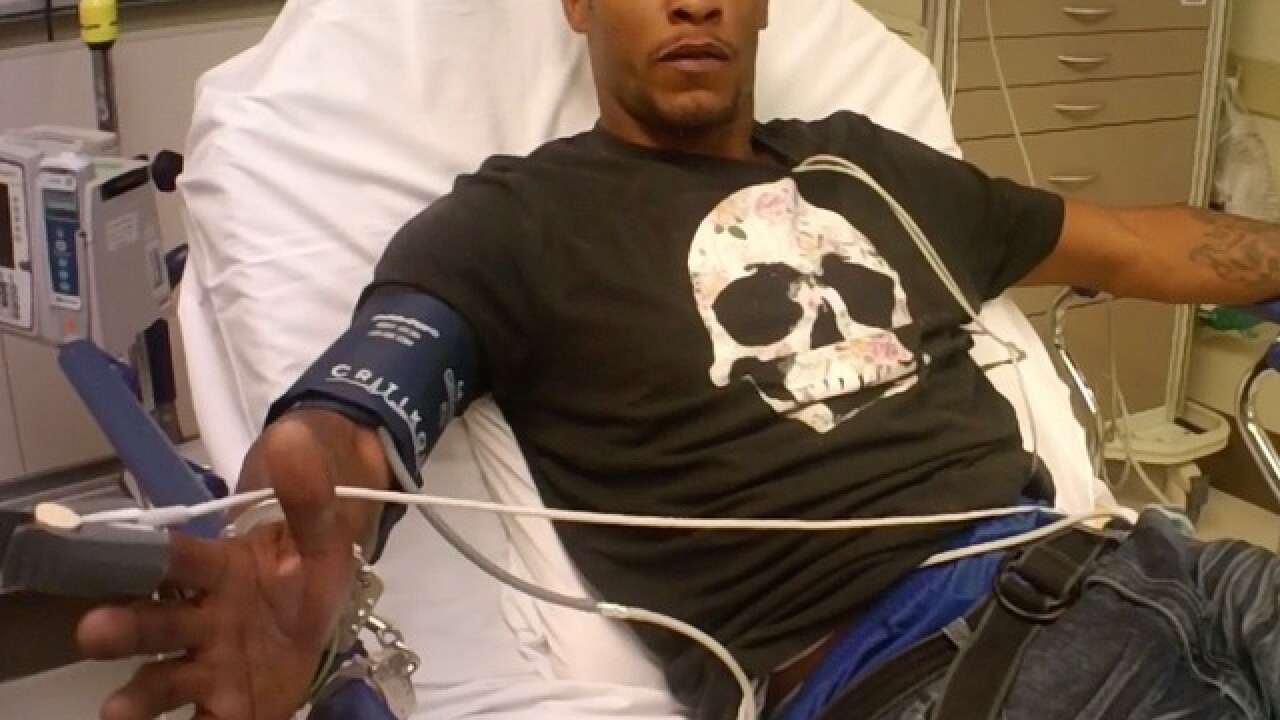 Editor’s note: This story was modified from the original after Cincinnati Police provided additional documentation to WCPO showing use of force reports were filed in 16 incidents that we cited as possible examples of underreporting. WCPO also discovered a 17th incident was incorrectly classified as a Cincinnati case. The officer involved was an Ohio State Trooper.

NEWPORT, Ky. -- On a chaotic night in Newport last fall, police used stun guns on three men who were charged with resisting arrest after a crash on Monmouth Street.

Only one of the three was named in a use of force report that followed the incident.

"They just started beating the crap out of us," Marquis White-Hambrick said. "I was tased multiple times, tased in my neck, choked, punched, elbowed. My brother was hit in the back of the head with a baton. He had a little gash in the back of his head. He got hit in the knee. His knee was swollen. He could barely walk."

Neither Marquis nor his brother, Marco White, was named in the department's incident report on the melee, even though both were taken to the hospital and interviewed about their injuries on police body cameras.

It's one of dozens of examples of possible underreporting uncovered by the I-Team in its ongoing investigation of how local police departments regulate the use of force.

RELATED: Forcing the Peace series examines police use of force across the region

It's not just a bureaucratic problem. National experts on use of force say complete and accurate data is necessary for departments to learn whether they have a problem with excessive force and how to train officers to do their jobs without causing harm to themselves or the public.

"How did we stop having plane crashes in America? We started getting really good data," said Charles Gruber, a retired police chief who has investigated several police departments for the U.S. Department of Justice. "We started asking for data from everybody, and then we began to learn: What were the mistakes that we were making, and how do we correct those mistakes?"

Gruber was a police chief for 32 years before the Justice Department sent him to Cincinnati to investigate an alleged pattern of abuses that came to light after the 2001 shooting death of 19-year-old Timothy Thomas. The shooting sparked four days of riots and led to the Cincinnati Collaborative Agreement, which established an elaborate process for reporting on police misconduct and mandates independent reviews of use of force incidents.

"There's all kinds of information that needs to be gathered that we use to judge whether the officer is really doing his job the way he's supposed to," Gruber said. "There are literally thousands of departments that are doing it the right way, but there are also thousands that are doing it wrong, and that's the problem."

Here's how it's supposed to work in Cincinnati.

When Officer Michael Smith deployed his Taser against 26-year-old Derrick Taylor last April, the incident resulted in a three-page report that provides extensive detail. Here is a summary:

Officers Smith and Steven Mittermeier responded to Gateway Plaza Apartments for a report of family trouble involving a man with a knife. When they confronted Taylor, he "stated he would ‘drop' Officer Smith" and "actively resisted by forcefully pulling his arm away from Officer Mittermeier."

Smith fired his Taser "from approximately seven feet away, striking Mr. Taylor in the chest." The Taser immobilized Taylor, who was taken into custody, then treated and released by fire department personnel.

"Sgt. Love's interview of Mr. Taylor revealed he heard Officer Smith's warning of the Taser and he also admitted to drinking alcoholic beverages," according to the report.

WCPO obtained Taylor's use of force report as part of a public records request that sought all such reports since Jan. 1, 2016. Cincinnati police provided documents on 201 incidents from 2017.

WCPO looked up approximately 500 resisting arrest cases in Hamilton, Campbell and Kenton counties to determine whether use of force incidents were being documented in criminal records but not in departmental records that track the use of force.

In Hamilton County, a search of 316 records from 2017 revealed 66 incidents that described a possible use of force in criminal complaints. In 41 of those cases, WCPO was able to find corresponding use of force reports from departments that responded to our record requests.

WCPO was unable to find use of force reports for 25 defendants whose arrest reports includes phrases like "subject was tased," "K-9 bit the subject's leg" or "subject was taken to the ground."

After the initial publication of this story on Nov. 20, the city of Cincinnati provided additional records to WCPO. That led to the removal of 17 incidents from the list of 21 Cincinnati cases that WCPO classified as possible underreporting.

The remaining four incidents involved one man who an officer “took to the ground.” Another man was “placed at Taser point.” A woman was “dragged to the patrol car” after kicking and spitting on an officer. Another women was “placed in cuffs by force.”

The department reviewed all four cases and concluded they did not require use of force reports, spokesman Eric Franz said.

In Colerain Township, there were two incidents in which "restraining force" was used to subdue suspects who were allegedly resisting arrest. The incidents did not meet the township's definition for use of force, said Colerain Police Chief Mark Denney.

"Restraining force is basically using your body weight to hold someone against a car/ground," Denney explained in an email to WCPO. "It does not require a use of force report."

Some experts favor a broad definition for the use of force to encourage the collection of more data.

"If you're guiding someone to a car, that's not a use of force unless the person resists, but everything beyond that" should be documented and subject to review, said Geoffrey Alpert, a University of South Carolina professor who has studied high-risk police activities for more than 30 years. "If you have only serious use of force documented, then the percentage of uses of force that results in injury is going to mean nothing."

However, the I-Team found wide variance in how local departments define and track the use of force. Forest Park and the Boone County Sheriff's Office, for example, require documentation every time an officer displays a gun. Cincinnati and Colerain Township do not track such incidents.

"I am very concerned that we will place fear of arrest/termination/civil action in the officer's minds should we characterize the simple display of a weapon in the same category as striking someone with an Asp or using a taser," Denney wrote. "One is a direct use of force while the other is almost always an attempt to avoid a use of force."

Here's how Newport Police Chief Tom Collins defined when an officer should file a use of force report in his department: "Our policy says pretty much any time you have to put your hands on somebody and they're not in compliance that's usually when we do a use of force."

In the city's annual report to citizens, Newport said it had 15 use of force incidents in 2017. However, it delivered reports on 18 incidents in response to WCPO's record requests. Campbell County court records, meanwhile, showed 22 additional incidents that never found their way into a Newport use of force report.

Marquis White-Hambrick and his brother Marco are two examples.

They were involved in a non-injury crash near Bitter's Tavern on Sept. 27, 2017. The I-Team reviewed a police incident report, criminal records and body camera videos to construct the following description.

When police arrived, Marco and the other driver, Kerrey McCown, were "in an altercation," Newport Officer Steven Linville wrote in his account of the incident.

"McCown became increasingly agitated" and Linville "became concerned" that her "conduct was inciting the crowd" that had gathered to watch the brewing fight. So, he arrested McCown, who resisted, losing her shirt in the process.

At that point, Matthew Campbell approached Linville from behind and "attempted to pull him off of Ms. McCown." Linville punched Campbell in the face. Campbell "took a fighting stance and advanced" toward Linville, who "deployed his Taser in probe mode."

The incident was reviewed by Linville's supervisor, Sgt. Brandon Haffey. He deemed no corrective action necessary and his decision was affirmed by Chief Collins.

"Officer Linville made a good decision to strike Mr. Campbell quickly with a punch in self defense," Sgt. Haffey wrote. "Officer Linville then progressively went to his Taser only having to discharge it twice, one of which was ineffective. The result was ultimately getting a violent resisting subject into custody with minimal injury."

The review did not address the two other men who were injured by police during the incident, even though both men were questioned about their injuries at a St. Elizabeth Healthcare emergency room.

"You got a cut on the side of here too, let me get a picture of this, just a small one," Haffey told Marco White at the hospital.

"It's probably when he punched me in my face," White responded.

"It probably was," Haffey agreed.

In another hospital room, Marquis Jamel-White told a different Newport officer that he was trying to prevent his brother from fighting with officers by grabbing Marco after a police officer punched him.

"Next thing you know I'm being tased and thrown to the ground," he said.

In an interview with the I-Team, White-Hambrick said he feared for his life during the incident. He also believes police "were antagonizing people and they wanted it to happen. They wanted an altercation."

When the I-Team interviewed Chief Collins about the incident in October, he said he "wouldn't have approached that scenario like that" but didn't specifically criticize how officers handled the situation.

He said the case involved "unusual circumstances, that you go to a traffic accident that's minor and you have that many people that's arrested. There's something wrong on both sides of that event."

Collins did not address why Campbell and McCown were the only people mentioned in the department's use of force report, and the department has not responded to WCPO's questions about whether additional incident reports were filed.

Collins did tell WCPO in October that his department might have more use of force reports than it released in response to our record requests. But the department hasn't provided any additional reports since then.

Gruber said all of that is a problem because it suggests a lack of accountability.

"I would just tell that community to get their checkbook ready," Gruber said. "It's only a matter of time."

In a previous report, the I-Team revealed that Newport officers lead the region in striking suspects in the head. Although Chief Collins said head strikes are "never appropriate," he's yet to discipline an officer for that conduct.

If Newport city officials are concerned about that, they aren't showing it. Newport Mayor Jerry Peluso declined to comment after a city commission meeting Monday, referring all inquiries to City Manager Thomas Fromme.

"I'm not going to comment about what concerns I have or don't have," Fromme said. "I can just tell you I have faith in the chief."