Are concussions scaring parents away from football?

Participation down locally and nationally
Posted: 6:00 AM, May 13, 2016
By: Marais Jacon-Duffy 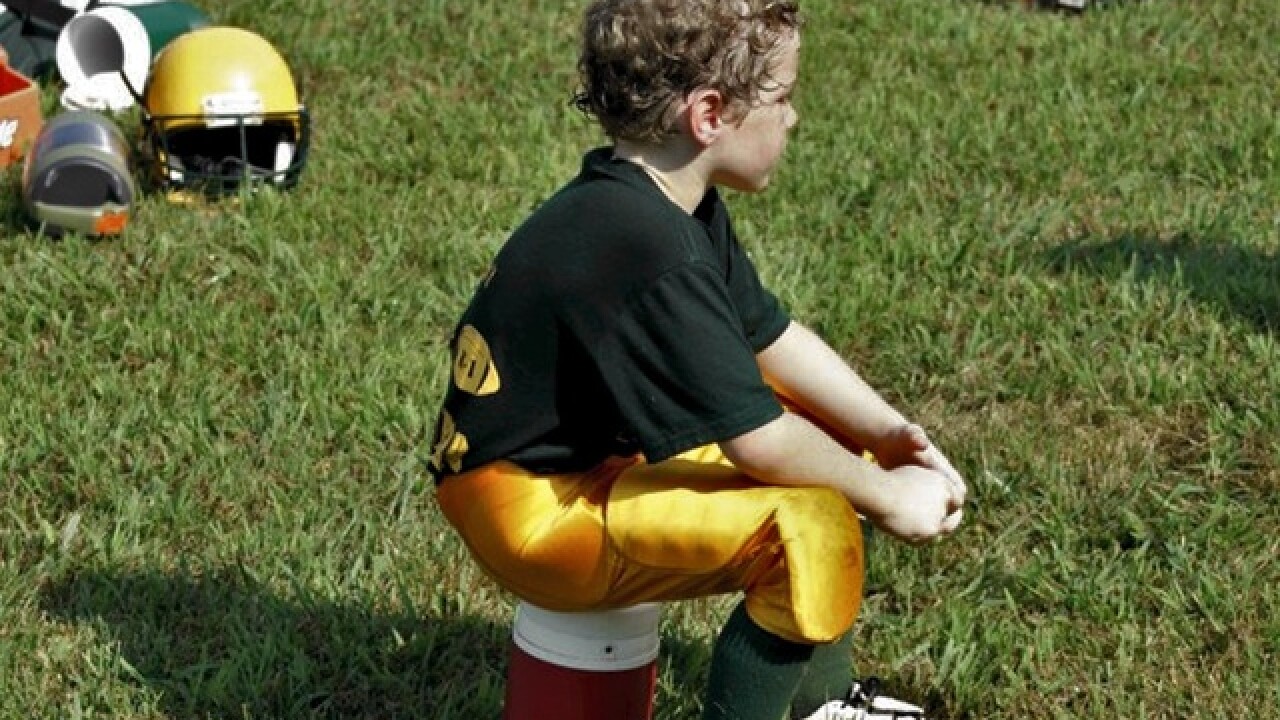 CINCINNATI — As awareness and public discussion of concussions increase, there is a notable side effect — a national drop in football participation.

“We’ve seen a decrease, but not a sharp decrease,” said Tim Stried, director of informational services for the Ohio High School Athletic Association. “Health risks might be one factor.”

Increasingly, parents are prohibiting their sons from playing football. Many cite concussion risks, according to some local youth league commissioners.

“The numbers have definitely dropped,” said Matt Macke, vice president of the Southern Ohio Youth Football Association. “Parents are so worried about concussions, although I don’t know that youth football is actually the most concussion-prone of the sports.

“Youth football has gotten a bad rap and gets a lot of negative attention regarding concussions,” Macke said.

National concussion statistics don’t help defend claims that youth football is safe: the NFL reported concussions were up 58 percent in 2015.

Sports administrators say the increase is a result of better monitoring and recognition of concussions, not an increase in the number of them.

'Football is the safest it’s ever been'

With a rise in concussion talk in the media — i.e., the 2015 movie “Concussion” — parents hear the opinions of professional athletes and celebrities alike.

In 2014, LeBron James said at a press conference that he would not let either of his two young sons play football due to health concerns.

"It's a safety thing. As a parent you protect your kids as much as possible,” James said. “I don't think I'm the only one that's not allowing his kids to play football, it's just that I'm LeBron James and it gets put in the headlines for no reason."

“He doesn't have to play any sport, as far as I'm concerned,” Mathis said of his 2-year-old son to the Detroit Free Press. “But if he does get into it, football will be the last thing I introduce him to."

However, Stried said he thinks football has benefited from the scrutiny, helping the sport to reach a pinnacle regarding safety.

“For decades, if you had a concussion you kept playing unless you were knocked out. But now we have enough knowledge to know that it isn’t safe — back-to-back means fatal, or long-term damage. Now we can recognize (concussions) immediately, even if you can’t see it.”

In the past few years, the OHSAA established hitting limits (one hour of hitting each week), required more training for coaches and officials and had the state’s concussion protocol signed into Ohio law.

“If either of my sons want to play football, I would love to let them do that,” Stried said. “It’s safer now than ever.”

“Whether you’re playing football or on a hay ride, you’re at risk to get a concussion,” he said. “You can’t raise your kids in a silo.”

Kentucky follows a concussion protocol that’s essentially identical to Ohio’s and sends all coaches, including assistant coaches, to a medical symposium before the start of the season. Like Ohio, Kentucky’s requirements were also signed into law.

“What we stress is ‘there’s nothing wrong with being concerned,’” he said.

“Football gets a bad rap with concussions,” said Scott Donaldson, vice president of the Clermont County Youth Football League. “Even though it’s not truly the most dangerous sport in terms of concussions, perception is reality.”

The perception shows in the numbers, Macke said.

“It’s an issue. Numbers have definitely dropped, kids leave and switch to other sports,” he said. “But if parents realized how much emphasis we’re putting on concussions, they would feel much better, I’m sure.”

'Entrust your most valuable possession'

Patrick Canaan of Fairfield has a front-row seat to watch how sports evolve as concussions are better understood.

A former athlete, current gym owner and trainer, Canaan said he’s sustained two concussions himself. He was knocked out cold while playing in a high school football game. Because of that, he said, he’s aware of the risks — he also said the benefits of sports outweigh the risks.

He told his 12-year-old daughter Juliet to avoid one specific soccer move that puts players at risk of getting a concussion.

“On day one, I told Juliet ‘No headers,’” he said. “Headers are difficult to do and they could cause some serious long-term damage if done wrong.”

But with football, he said, it can be more difficult to avoid the risks.

While neither of his sons ever sustained a concussion, they have witnessed a serious head injury.

“We saw a kid who was knocked out cold. A linebacker peeled around and ‘boom!’” he said. “The whole team was scared to death when they saw that.”

Local coaches agree that there’s no magic tool or equipment that will totally wipe out the risk of concussions; they said the best protection is good technique, conscientious coaching and stringent rules.

“Like a lot of activities, football comes with inherit potential for injury,” Stried said. “But our job is to always think ‘What can we do to make this as safe as possible?’

“Coaches, overall, want to do what’s good for the kids. They want to protect them. A coach who is not supportive of this kind of regulation needs to seriously reevaluate their priorities.”

And coaches are happy to enforce the rules, Donaldson said, even when they’re not popular.

“I don’t mind having to be the hard ass,” he said. “With safety rules, there are absolutely no exceptions.”

Not All Parents are Worried — Some are Annoyed

Matt Macke has coached youth football for 30 years. In his experience, for every parent who’s gravely concerned about concussions, there’s another parent who is put out by concussion protocol.

“I see more parents come up to me if we set their kid out after a hard blow and say ‘He’s OK, he’s fine, put him back in,’” Macke said. “I had to tell parents this year — who told me to put their son back in — that his pupils were dilated and he said he his head hurt. I told them ‘No, it’s not worth it.’”

Macke said the game official defended his call and told the parents he would not let their son back in the game.

“Just don’t — it’s not worth it,” Macke said. “We’re talking about something permanent that could affect the rest of your son’s life or possibly kill him. It’s definitely not worth the risk.”

In the CCYFL, Donaldson said potentially concussed players’ helmets are removed from the bench to ensure that they won’t return to the field.

“That’s not always well received,” Donaldson said. “Every so often there will be a parent yelling ‘Why did you take him out? It’s only the first quarter!’”

Canaan said he thinks some fellow parents forget to “use common sense” in the sports setting.

“If you can’t play, you can’t play. That’s all there is to it,” he said. “If you don’t agree with the doctor’s analysis, you can always get a second opinion. But, at the end of the day, your child’s health is something that you can’t buy.”

What Happens Down the Road?

Macke and Donaldson, both longtime youth coaches, said the images of concussed players still stick with them.

“Any time a player is hurt, it breaks your heart,” Macke said.

One particular instance years ago motivated Donaldson to reconsider the severity of concussions, he said.

“It was a high school game — Batavia versus Bethel — and two players collided. They were both knocked out on the field,” Donaldson said. “And I thought, ‘We need to do more.’”

Needless to say, the football landscape could change drastically over the next few years.

Tackett is involved with USA Football — a partner of the NFL — and said he’s gotten some ideas from the group.

“I’ve been in favor of getting contact out of youth football,” he said. “If we let them play flag football, they’ll still learn to find holes and run plays. I don’t think we need to have children banging heads out there until high school.”

Rather than switching to flag football, some lobby for an end to youth football completely.

Some studies say participation in youth football may lead to brain injuries later in life. This Boston University study examined former NFL players who played football at the youth level.

Additionally, Dr. Bennet Omalu — the doctor depicted in the movie “Concussion” — also said kids should not play football, comparing the sport to age-restricted activities like driving or drinking alcohol.

While Ohio and Kentucky high schools have a one-hour hitting limit each week, and many youth leagues adhere to this, it will be tested at a more extreme level in the NCAA this year.

Ivy League football teams have eliminated tackling from all practices. The New York Times called this “the most aggressive measure yet to combat growing concerns about brain trauma and other injuries in the sport.”

Macke said he isn’t sure that limiting or eliminating hitting practices will be a permanent trend.

“You have to teach kids to hit properly,” he said. “That’s a huge part of preventing concussions also. So I think the no-hit practices will change.”

New medical advances and technology, like those studied at Cincinnati Children’s Hospital Medical Center, could change the game for future generations.

Have more questions? Try these resources:

The CDC's Heads Up concussion program

Concussion fact sheet from the CDC

The Mayo Clinic on concussion prevention

The Mayo Clinic on concussion treatment