An exceptional pairing: Entrepreneurial couple shifts from tech to wine 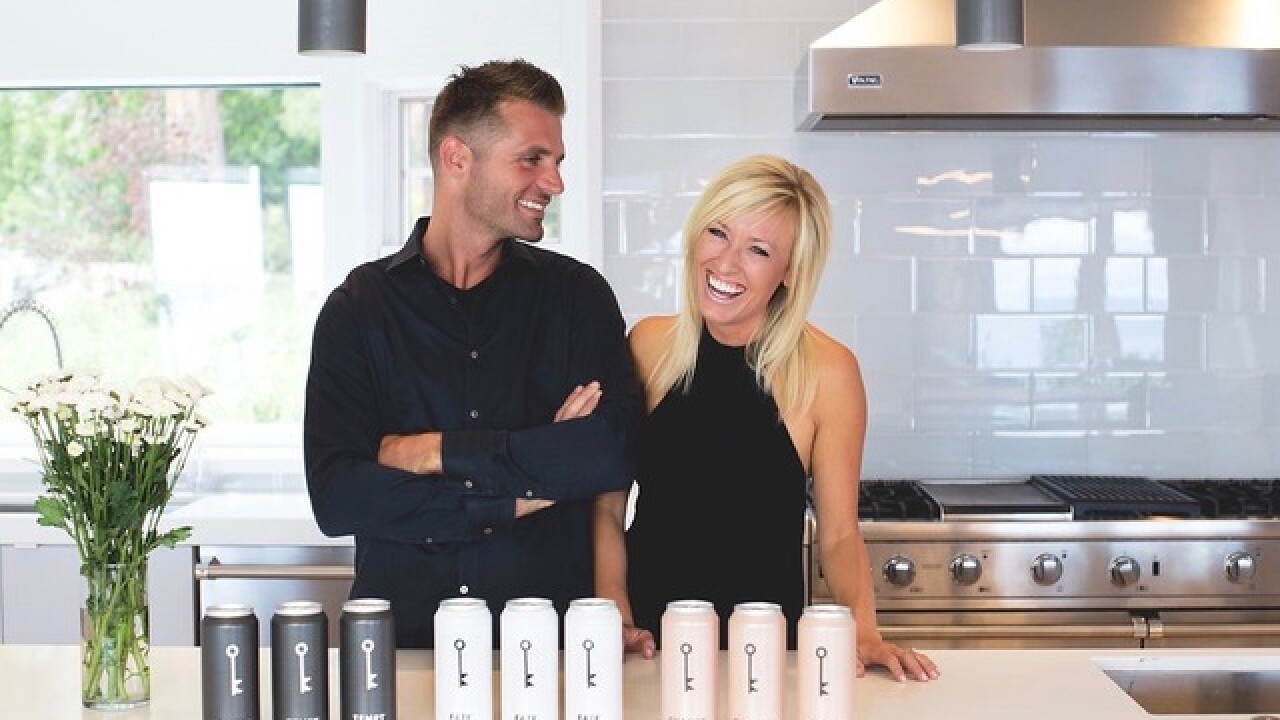 Copyright 2018 Scripps Media, Inc. All rights reserved. This material may not be published, broadcast, rewritten, or redistributed.
<p>Austin and Angela Allison are the founders of Wine Society LLC</p>

It’s a consumer-product company that puts blended wine into cans so it can be easily shipped for e-commerce orders or sold in retail outlets, including the Hyde Park Kroger store.

Although it’s less than a year old, the Allisons say WineSociety could be bigger than the last business they built together. Dotloop LLC, a software company that enables paperless transactions for realtors, was sold to Zillow in 2015 for $108 million.

“We think that this is going to be a $15 billion category,” Austin Allison told WCPO. “Canned wine is by far the fastest-growing sub category in the wine industry and our timing could not be better.”

Rare is the love story that generates an economic impact.

But the Allisons, who met when they were Warren County teenagers and married 11 years ago, have now partnered successfully on several real estate ventures, a Napa Valley winery and Dotloop, a roughly 200-employee Zillow subsidiary that doubled the size of its Cincinnati office in 2017.

“I describe Angela as a quasi-co-founder because she was there from the very beginning and was with the company all the way through the sale to Zillow Group,” Austin said.

“We both have our different strengths and they actually just pair really well together,” Angela added. “So, we each learn a lot from each other and that’s helped strengthen us as an entrepreneurial couple and just a couple in general.”

A business advisor to WineSociety said the Allisons remind him of two Cincinnati business legends who built Cintas Corp. into a $4 billion company.

“The combination of Dick Farmer and Bob Kohlhepp was just phenomenal, the way they complimented each other’s skills,” said Michael Schneider, a former Cintas vice president. “Are Angela and Austin similar to that? Similar yes, but not the same. I mean, they’re not that good a marriage.”

Joking aside, Schneider said Angela is strong on consumer insights and graphic design, while Austin’s strengths include business analytics and supply-chain issues.

“The big things that they need to cover they know,” he said.

Austin Allison said the progression from tech founder to wine merchant was a natural one.

“The theme has been simplifying complexity,” he said. “In the real estate industry we saw that transactions were inefficient and complex. We wanted to solve that using technology and creative marketing. We saw the same thing in the wine industry. We were traveling between Cincinnati and California, the two places where we spend most of our time, and we fell in love with wine but we also recognized that the wine industry is quite complex.”

The Allisons are trying to simplify wine choices by offering high-quality blended wines that hold their flavor in lined cans that won’t allow light or air to penetrate. That simplicity is emphasized by its package design, clean and lean with its skeleton key logo and one-word trademark names: Tempt for red wine, Fate for white and Chance for rose’ blends.

While the presentation is simple, the product-development process was not. They conducted extensive market research and experimented with dozens of different wine blends. They also tested many product names before they found three that could withstand trademark challenges. They hired experts to help them navigate the web of regulations that make it hard to distribute wine across state lines.

“Everything about starting a new business is hard,” Austin Allison said. “Really the only thing you can do to make it a little easier is surround the company with great people. That’s the only shortcut.”

Schneider is among those who helped the Allisons over the years. A retired executive from both Cintas and Procter & Gamble Co., Schneider said he met Austin Allison “when he was just a kid riding a motorcycle” to the Lebanon YMCA, where they both worked out.

Allison asked for guidance on how to build Dotloop and Schneider gave it freely, meaning he literally did not expect to be paid. But Allison did pay him with “a very nice check” when the company sold.

“He’s really a nice young man,” Schneider said. “I admire he and Angela for what they’re doing. After selling to Zillow, they could coast but he is driven. He was all in for Dotloop and I’m sure he will be here.”

As the Allisons enter the wine business, the industry could be on the cusp of a container shift. Nielsen data shows canned wine sales grew 60 percent to $23 million in the 12 months ending in June 2017. Another research firm, BW 166, estimates the industry doubled to $45 million by June 2018.

The shift to cans is “at the very beginning, but it’s definitely not a fad,” Angela Allison said.

In an interview at the bar in Kroger's Oakley Marketplace store, the Allisons said they wanted Wine Society to appeal to women between the ages of 25 and 40. So, the couple spent months taste-testing blends that are “beautifully balanced,” not too acidic or bitter.

Each can is roughly two-thirds the size of a typical wine bottle, meaning it’s enough to pour three to four glasses.

“What people rave most about and praise as it relates to this product is the quality,” Austin said. “This can drinks like a $40 bottle but you can buy it here at Kroger for $10.99 a can. So it’s really a bargain.”

The Allisons won’t reveal sales results but they did reveal two details that show their confidence in the young company. Their initial production order delivered the equivalent of 20,000 cases of wine, a sizable inventory for a small winery.

The hunt for a Cincinnati headquarters is another hopeful sign. The couple wants an office space to house its 10 employees, plus a ground-floor retail space that can host wine tasting events.