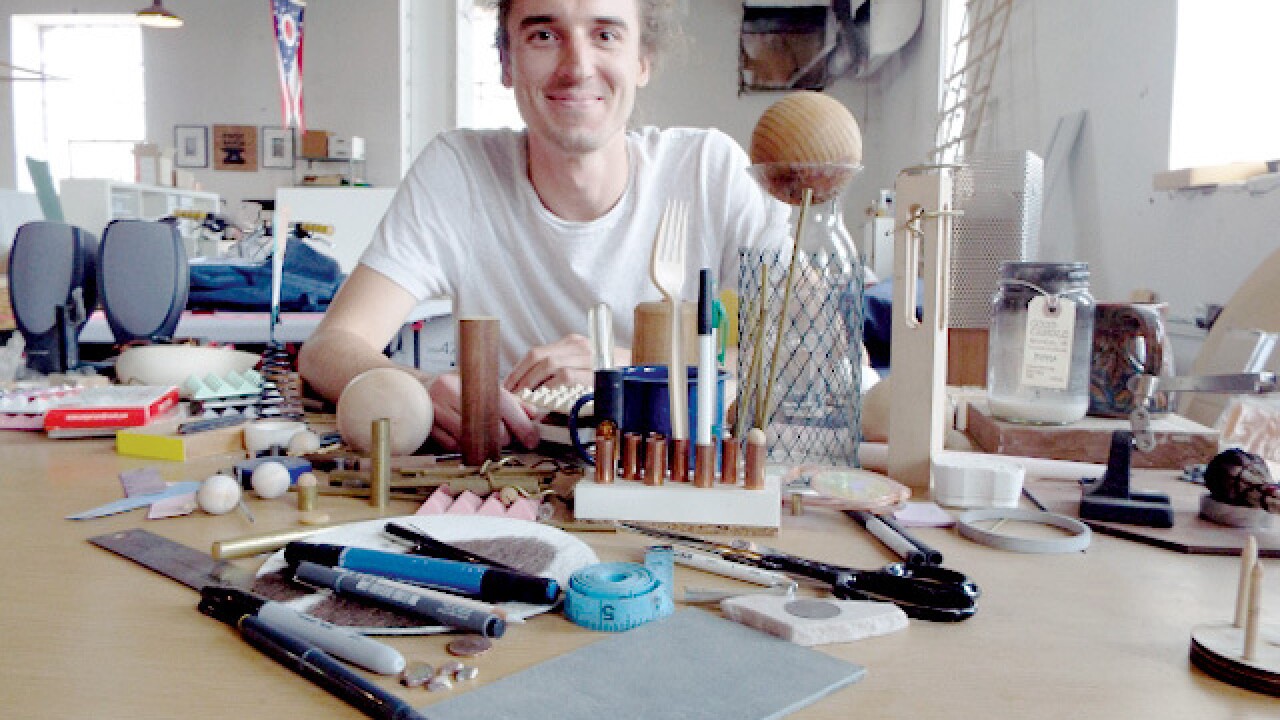 <p>Tim Karoleff sits at his workspace in Over-the-Rhine, which is covered with completed projects and works in progress. (Kevin Eigelbach for WCPO)</p>

CINCINNATI — A conversation with Tim Karoleff about his business, Ampersand, often veers into a conversation about art.

That’s because his business is to make practical furniture and household goods that double as objects d’art.

“His workspace looks much like a sculptor’s studio, not like an office or a traditional design space,” said Matt Distel, exhibitions director at the Carnegie, the Covington nonprofit arts facility. The Carnegie exhibited some of Karoleff’s work in its modern living show last winter.

“He’s coming up with all these weird solutions to design issues and everyday living issues,” Distel said.

What does he make and sell?

One of his most popular products is the punk soap dish, in which bars of soap lie on small, plastic pyramids that allow air to flow under the bar. That keeps the icky mix of soap and water from deteriorating under the bar, which makes the bar last longer.

The design was inspired by the shape of Toblerone chocolate bars.

His first product was Wallpockets, pentagonal, corrugated-cardboard pockets that hangs on a wall. It’s designed to give a room visual appeal, he said, but also to provide storage space for light things such as stuffed animals or mail.

Like many of his products, it’s made and packaged locally, in this case by Clovernook Center for the Blind and Visually Impaired in North College Hill.

He’s working on a salsa bowl with a lip on one end that’s designed to keep the salsa on the chip as one scoops it up.

Karoleff earned a degree in industrial design at the University of Cincinnati in 2009, then served an apprenticeship with a New York City furniture maker. When he moved back to Cincinnati in 2011, he started Ampersand as a way to change how people think about designing and buying household goods.

Buying cheaper goods that quickly break isn’t good for the consumer or for the planet, he said. “I’m trying to educate folks to spend a little more money up front for something that will last an entire lifetime,” he said.

In January 2012, a few months after he started Ampersand, he began teaching industrial design at UC, and now he divides his time between teaching and running the business.

Is it making money?

Ampersand does make a profit, Karoleff said, but he declined to say how much. He sells his products not only online but also at retail stores such as CB2, a small, design-focused subsidiary of Crate and Barrel (the chain has just 11 stores so far).

Since they’re designed to last, the products aren’t cheap. The popular bundle table retails for $479 on the website, and even the punk soap dish is $29.

Only Karoleff, who started the business with $8,000 and has financed the rest through his profits. His expenses are few — he rents space at First Batch, a business accelerator in Over-the-Rhine for companies that make physical products. He graduated from the program as part of the 2014 class.

He is Ampersand’s only employee, but his younger sister, Victoria, design manager at the Cincinnati Art Museum, does Ampersand’s graphic-design work on a contract basis.

He doesn’t see the business becoming very large. He wants to continue teaching full-time at UC because it helps him understand his ideas and philosophies, he said, and “defend my opinions to students who really want to prove me wrong.”

He would like it to grow large enough for him to employ a few more people, though.

How important it is to pay attention to what’s working and to pivot his energies into that, rather than what’s not working.

“The other thing I’ve found is that, when we try to design products for the sole purpose of making money, these tend to be the less successful,” he said. “When we design things to solve problems, or that are an interesting aesthetic interpretation, these are the ones that people respond to.”