Almost 30 years ago, the Tri-State was captivated by the trial of Sam the chimp 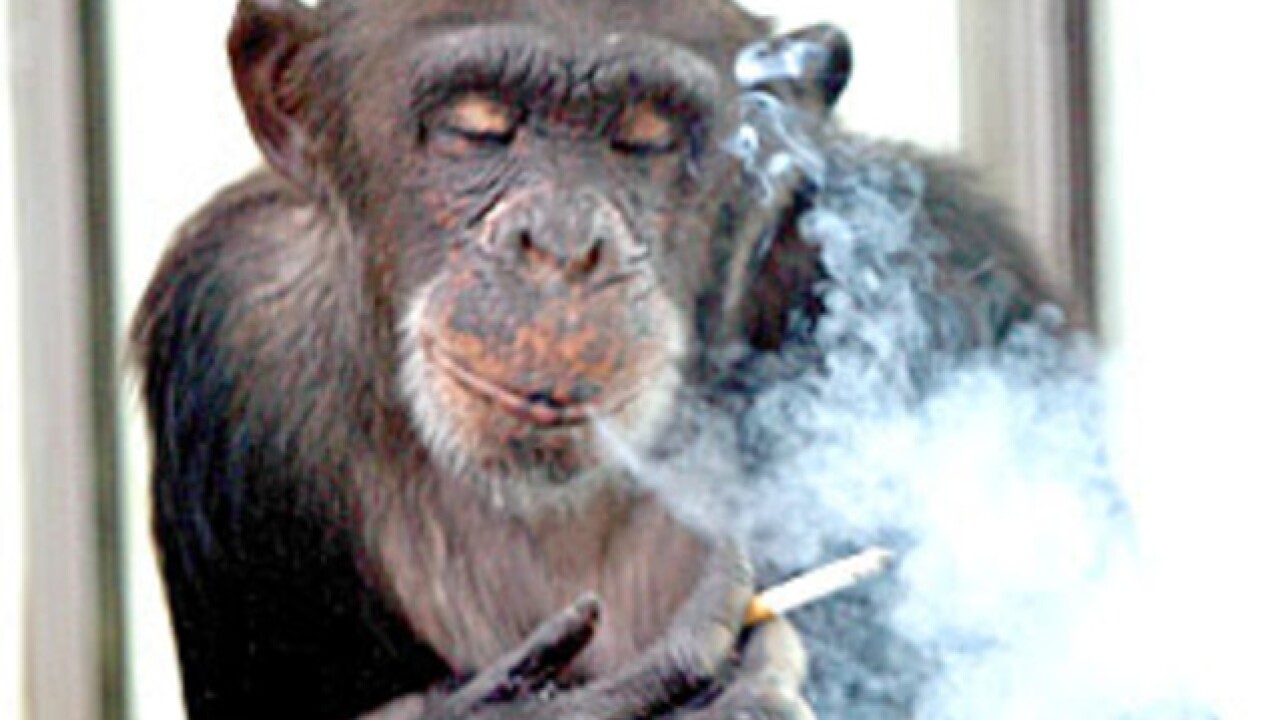 Copyright 2017 Scripps Media, Inc. All rights reserved. This material may not be published, broadcast, rewritten, or redistributed.
Provided
<p>Sam the chimp puffs on a cigarette. The chimp was the focal point of a court case involving accusations of animal cruelty in the late 1980s in Warren County. (Photo provided by Mark Altemeier)</p>

HAMILTON TOWNSHIP, Ohio -- It is almost 30 years ago this month that one of the strangest court cases this area ever had seen came to an end.

It involved a chimp named Sam.

Sam was in his mid-teens, weighed about 140 pounds and stood 4 feet in height.

Sam's owner was Kenny Harris. Harris died in 2013. But back then he was the proprietor of a bar called the Train Stop on Old 3C Highway in what was then known as Foster. Harris kept the chimp at the bar and Sam mingled at times with the customers. Sam also smoked and drank beer to the delight of the patrons.

Melody DeCarlo worked for Harris and knew him well. She has heard all the stories about Sam.

"Kenny always told me he won Sam in a poker game," she said.

The regulars told her that Sam would take three puffs of a cigarette and then drop it, DeCarlo said.

The Humane Society of the United States was not amused, however. It accused Harris of animal cruelty and said he kept Sam in unsanitary conditions in a cage located outside but near the bar. Though DeCarlo noted that in the winter, Harris set Sam up in a downstairs location in the bar.

Harris denied all the charges.

In the meantime, the Society took Sam and put him in an animal facility at Ohio State University. A trial began in the early summer of 1987 in Lebanon. Harris hired attorney Jim Sheets, a former assistant county prosecutor, to defend him.

"Early one morning, Kenny Harris, whom I knew, called and said: 'Jim, they took my monkey.' And so it began," said Sheets, 75, who is retired now and living in Florida.

He believes runners and cyclists using the then-new Little Miami Scenic Trail near the bar probably turned Harris in to the Humane Society because Sam's cage could be seen clearly from the trail. And, with that, he said, Sam's habit of sometimes pleasuring himself in full view of the public.

"I once took a whole caravan to Columbus to check on (Sam's) welfare," Sheets said. "Susi, Sam's girlfriend, also came along, much to the delight of the assembled press and TV cameras."

Everyone agreed Sheets was a smart attorney. He played the case for what he thought it was -- an overreach by the Society. The jury agreed with him and found Harris not guilty.

Sam was returned to Harris and the bar.

"All cases depend on the facts," Sheets said. "In this case, the prosecution was taken in by the ‘do-gooders' of the Humane Society."

Sheets presented OSU records at the trial showing that the chimp had not been mistreated and was in good health.

In fact, Sheets said, the beer-drinking aspect was overplayed, because Sam's favorite drink was grape soda. But the Society was not finished, and a civil suit was filed to get the chimp back from Harris.

Sheets filed a $1.25 million countersuit. He accused the Society of malicious prosecution of Harris, according to published reports. The countersuit sought $250,000 in compensatory damages and $1 million in punitive damages.

In October 1987, the Society dropped its suit against Harris. But Sheets continued his suit, and the issue dragged on until February 1988, when both parties announced a settlement but no details.

"It turned out to be the most expensive chimpanzee ever to live in Warren County," Sheets said.

Sandy Rowland was the president of the Ohio chapter of the Humane Society of the United States in 1987-88. Rowland, who now sells real estate in Perrysburg, Ohio, did not respond to repeated requests for comment.

But MaryAnn Swartzwalder, executive director of the Warren County Humane Society, did. She's been in charge of the county chapter for 45 years. And the case of Sam is a sad memory for her.

"Most people just thought it was cute," she said. "They made it a big joke thing."

Swartzwalder said the county chapter did not have the resources to take on this case. That was the responsibility of the Humane Society of the United States, she said.

She recalls the Society's plan was to transfer Sam to a reserve in Texas and pair him up with a female. Swartzwalder added that the vets at OSU did find that Sam was "emotionally disturbed."

PETA was not involved in the case but was aware of it.

We "complained bitterly about the atrocious living conditions of this solitary chimpanzee, who was kept inside a filthy, dismal small cage to amuse bar patrons by drinking and smoking," said Katie Arth, media assistant manager with PETA. "They are intelligent, social, thinking, and feeling beings who have never deserved to be used and abused for entertainment."

Mark Altemeier, the new owner of the Monkey Bar & Grille, intends to honor Sam with a plaque and statue at the bar once renovations are done in April 2018. He recalls as a kid that he and his mom saw Sam in his cage.

"And Kenny gave him a pop to drink. I remember the cage … was clean and Sam seemed very happy."

MORE: See what changes are coming to the Monkey Bar & Grille

Donna Nicol, 71, is retired and living in Georgia. But back in the late 1980s she lived in West Chester and worked in Lebanon for the state auditor's office. She remembers Sam and the trial.

"There was really no right or wrong in my estimation," she said. "It was just 'a happening' in rural Warren County. Back then Warren County was less genteel. The Humane Society was just doing its job, or so they thought. Sam really did not need them to intervene."

In 1997, Harris took Sam away from the bar for good after Hamilton Township announced plans to turn his playground area -- it was on township land -- into public restrooms, according to published reports. Harris never publicly disclosed where he sent the 25-year-old chimp.

DeCarlo said she asked Harris many times what happened to Sam, but he would never tell her Sam's whereabouts, or if Sam were still alive.