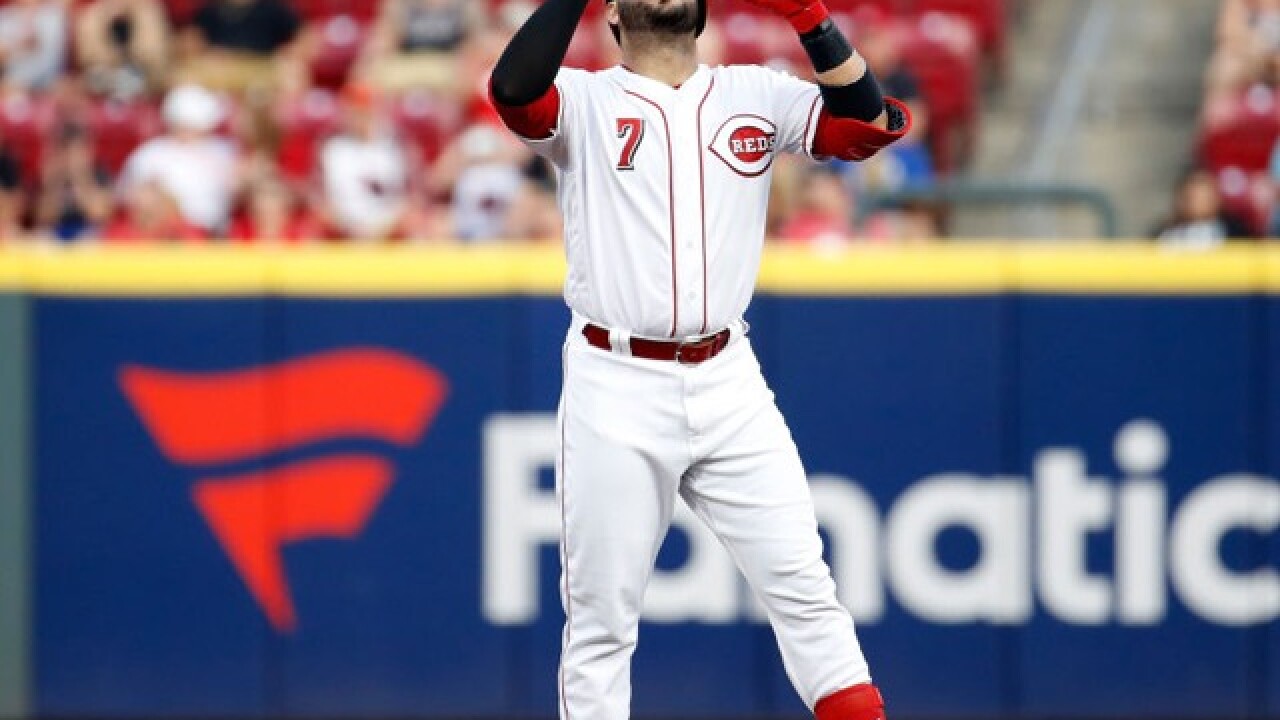 Copyright 2018 Scripps Media, Inc. All rights reserved. This material may not be published, broadcast, rewritten, or redistributed.
<p>CINCINNATI, OH - JUNE 28: Eugenio Suarez #7 of the Cincinnati Reds celebrates after hitting a double in the third inning against the Milwaukee Brewers at Great American Ball Park on June 28, 2018 in Cincinnati, Ohio. (Photo by Andy Lyons/Getty Images)</p>

CINCINNATI – They won’t be the only players at next week’s All-Star Game in Washington D.C. who, at some point in their careers, didn’t feel appreciated.

But there could be some added satisfaction for Reds third baseman Eugenio Suarez and second baseman Scooter Gennett when the first-time All-Stars line up on July 17 in our nation’s capital.

The Detroit Tigers traded away Suarez in 2014. Two years ago, the Milwaukee Brewers waived Gennett.

The Reds were on the receiving end of those moves, and along with six-time All-Star first baseman Joey Votto, they’ll have 60 percent of their reconstructed infield representing the National League next week.

“I give a lot of credit to our scouts for identifying these guys,” Reds president of baseball operations Dick Williams said, “but most of the credit goes to the players themselves for continuing to improve in their craft.”

Over the past three years as part of their overall rebuilding process, the Reds have completely retooled their infield.

There were some tough decisions along the way, like trading popular third baseman Todd Frazier and dynamic second baseman Brandon Phillips, and choosing not to resign shortstop Zack Cozart, who was reaching his peak offensively.

But the Reds’ efforts are beginning to bear fruit. The infield now features three All-Stars, and that doesn’t include a Gold-Glove catcher in Tucker Barnhart or an improving second baseman in Jose Peraza.

“It’s a pretty special infield we’ve got there,” Reds manager Jim Riggleman said. “We’ve got a Gold Glove catcher. That fourth infielder has really come along too, Jose Peraza. He’s starting to show people around baseball how good he is. Really happy and appreciative that our three guys are on there.”

The Reds’ infield trio was announced Sunday night as All-Star reserves. Suarez and Votto were chosen by player vote, and Gennett was picked by the managers. Votto is making his sixth appearance in the Midsummer Classic.

Former Reds general manager and now executive advisor Walt Jocketty orchestrated the deal for Suarez in exchange for Alfredo Simon, who posted a 4.06 ERA over two stints with the Reds and is now pitching in the Mexican League. Despite being among the Tigers’ top prospects, Suarez was offered up for a journeyman starter/reliever who had a 5.05 ERA in his only season in Detroit.

Since taking over as the Reds’ full-time third baseman after Frazier was dealt to the White Sox, the personable Suarez has shined, relentlessly working on the side to make himself one of the finest defensive third basemen in baseball.

Suarez said he always dreamed of becoming an All-Star.

Gennett can’t be blamed for carrying a chip on his shoulder large enough to challenge his 5-foot-10, 185-pound frame. When the Brewers decided to make Jonathan Villar their full-time second baseman, the writing was on the wall for Gennett, who was claimed by the Reds at the end of spring training. He then proceeded to have his best season as a pro in 2017, including his historic four-home-run game.

That success is reaching even new heights this season.

“Scooter, when we claimed him, our scouts had a vision of what he could become, but really he has exceeded those expectations,” Williams said. “Last year, he went from a role player to an everyday player to an impact player.”

Through 85 games, Gennett was batting .329 including a .349 clip on the road. He is bidding to become the first Reds player to lead the NL in batting since Pete Rose in 1973.

“For me, I don’t want to say I’m surprised about how I’m playing,” Gennett said. “I felt like I always was a good hitter and a good player. I’m just thankful that last year I got the opportunity to be in there on a more consistent basis. I would say I earned that opportunity. The true player in me came out.”

The question now is whether Scooter will be in a Reds uniform at the end of this month. With the Reds still in rebuilding mode and the non-waiver trade deadline approaching, the Reds have to make another tough decision. Gennett is 28 years old and reaching his peak as a player. Top infield prospect Nick Senzel is major-league ready but out for the season with injury, so the Reds could decide to keep Gennett, who is under control through 2019.

There’s no such trade discussion about Votto, who has five years remaining on a 10-year contract. He has appeared in five previous All-Star Games, twice as a starter.

A career .312 batter with a .428 on-base percentage through 1,519 games, Votto has established himself as arguably the finest hitter in Reds history and among the best all-time. Votto is hitless in 10 at-bats in the All-Star Game, however, with a walk and four strikeouts. But, he will get a chance to snap the skid next Tuesday in Nationals Park.

“The players voting me in was really exciting,” Votto said. “It’s always a great honor. I look forward to representing the Cincinnati Reds, the city and the team.”

Through Sunday, Riggleman had gone 36-36 since taking over as manager when Bryan Price was fired following a 3-15 start. The Reds are inching toward the Pittsburgh Pirates in an effort to escape last place. Perhaps better days are ahead.

If so, this trio of All-Star infielders will be one reason why.

“As Jim (Riggleman) said, why am I not winning more games with a group like this?” Williams said with a smile.