After years of work, Commonwealth Bistro is ready to serve Covington diners 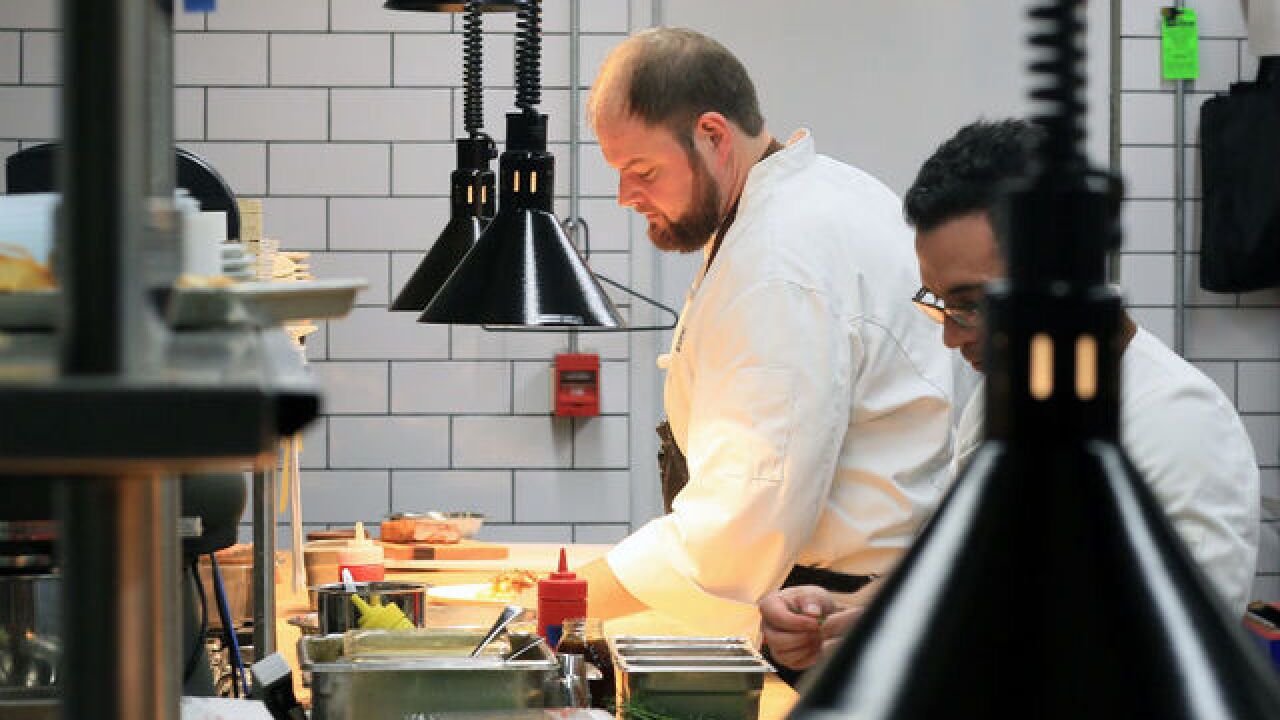 <p>Chef Chris Burns in the kitchen at Commonwealth Bistro on opening night. (Photo by Tine Hoffman.)</p>

COVINGTON -- It took Chris Burns and his wife, Tess, five long years to finally arrive at this moment: Their joint undertaking, Commonwealth Bistro in Covington, had its soft opening on Wednesday, serving dinner by reservation only.

Commonwealth Bistro, which will have its official grand opening Tuesday, is situated in a once-foreclosed and vacant 160-year-old building that the Burnses purchased and painstakingly renovated. They are the majority owners of Commonwealth.

Burns is a longtime chef who grew up in Anderson Township; he got his culinary education at Scarlet Oaks and Sullivan University. He also worked as Jean-Robert de Cavel's chef de cuisine at the now-shuttered Jean-Ro's Bistro in downtown Cincinnati.

He initially thought he would open Commonwealth in January 2014, but the renovation took longer than expected.

"Basically, we ended up running into a little bit of everything," he said. "Completing the building was a huge undertaking."

In November 2013, he launched a campaign on crowd-funding website IndieGoGo to raise $25,000 for the final construction. The campaign ended Dec. 30, 2013, having raised a little more than $11,000 from nearly 90 backers. Burns said even though the raised amount fell short, he will still receive the funds, and backers' rewards and gift cards will be honored.

According to Burns, it has taken a lot of sweat equity to get to this point, and he has had to "take off the chef clogs and put on the work boots."

On the menu: contemporary farmstead cuisine

Commonwealth Bistro's two floors seat 80 inside and roughly 50 outside on the 1,200-square-foot deck.

According to an early news release, the bistro emphasizes "homespun contemporary farmstead cuisine, featuring the best produce, dairy, meat, poultry and handcrafted artisanal products the region has to offer.”

Burns said rabbit is a meat that's common to the region. Not surprisingly, one of the distinctive menu items is Kentucky fried rabbit served with buttermilk biscuit, creamed collard greens and bizbaz sauce.

Instead of relying on heavy cream, Burns purees slow-roasted onion with extra virgin olive oil and lemon juice to approximate the "cream" in the collard greens. He's also adding an international touch with bizbaz sauce. "It's a North African dipping sauce with cilantro, garlic and yogurt," he said. "It's very herbal."

Another distinctive dish is the burgoo ravioli served with charred root vegetables and marchand de vin (a red wine reduction). Burgoo, a popular dish in Kentucky, is usually prepared as a stew with a combination of meats.

"We made ravioli using brisket, chicken and rabbit, mixed with ricotta cheese and herbs," he said.

Commonwealth also features a full bar inside on the first floor and another one outdoors on the deck.

According to Harris, while the beer list is largely focused on Ohio, Kentucky and Indiana, it also includes the Midwest and upper South.

"We're trying to highlight smaller breweries that don't have a lot of representation in the area," he said, such as the Blackberry Farm Brewery in Walland, Tennessee. Local favorites like MadTree and Rhinegeist also are on the beer lineup.

The chef also has managed to incorporate a little bit of Cincinnati's culinary heritage into the bistro: The chairs and table bases that furnish Commonwealth once served Jean-Ro's Bistro.

In addition, the jukebox that anchors the bar area on the first floor provides more than just entertainment. It's also a sliver of family heritage.

"The jukebox is my wife's family heirloom. She's had that jukebox since she was eight," Burns said.

For Burns, it has been nothing less than a journey to finally open the doors and cook for the public.

"I feel joy more than anything," he said. "I'm very, very grateful for all the support of the community, family members, partners and investors, and I'm really very excited to be moving forward."