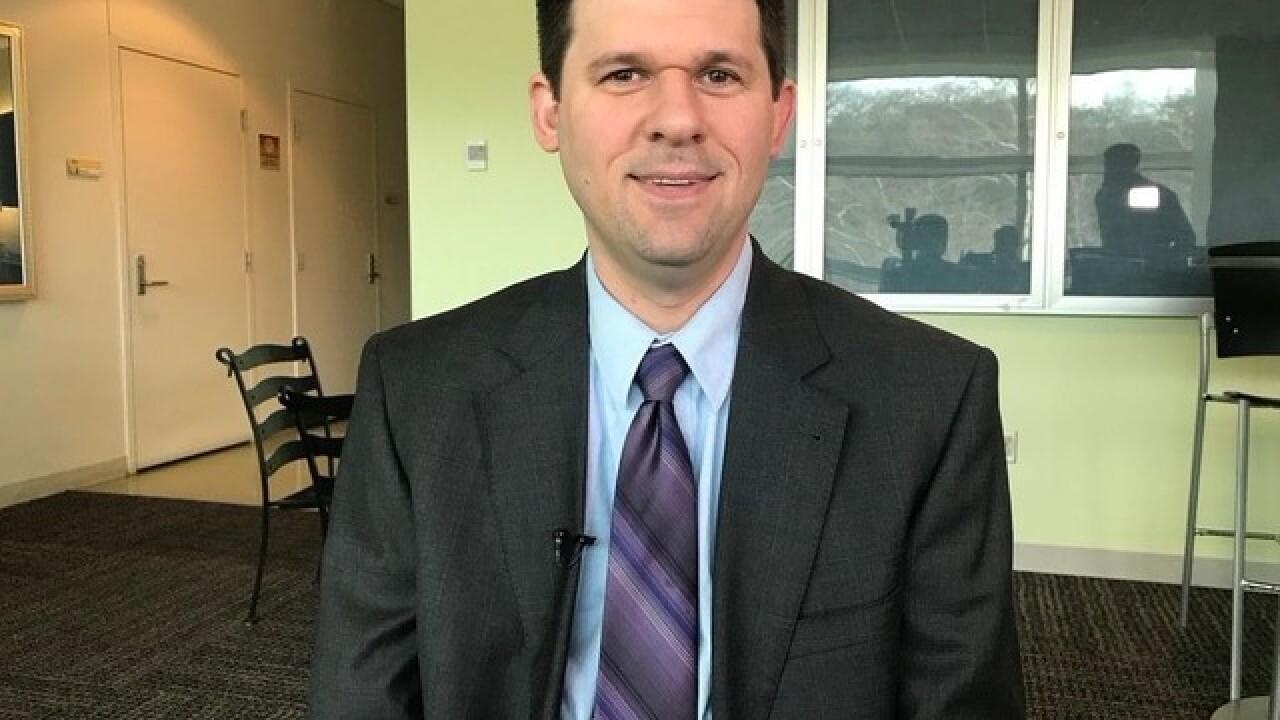 Copyright 2018 Scripps Media, Inc. All rights reserved. This material may not be published, broadcast, rewritten, or redistributed.
<p>Jeff Capell, an economist and government watchdog, questions why the city Cincinnati is making so many loans. </p>

His fiery speeches and scathing tweets are notorious, because he’s not afraid to hurl insults at anyone or anything that he believes is wasting taxpayer money.

Capell is a gadfly. A government watchdog. And a pest.

So it came as somewhat of a shock that in December, Capell became the very thing he criticizes the most: an elected leader.

“For many years I said I was never going to run for anything,” said Capell, 42, who is an economist at the U.S. Bureau of Labor Statistics. “I was very happy to just be a citizen activist and do work on the issues I cared about.”

But that changed when Capell, who has lived in Blue Ash for 14 years, became frustrated that city council was subsidizing a local golf course with tax dollars and taking trips to Germany on the public dime. He decided to run for office himself.

In November, Capell defeated a 17-year incumbent to win a seat on Blue Ash City Council with more than 56 percent of the vote.

Does this qualify as a "sh*thole project" https://t.co/i5I2KL0n9S

Now, as Capell transitions from a citizen activist to a city councilman, he is learning the delicate art of diplomacy.

“One change I definitely had to make is: Normally when I would talk about an issue I would just come right up and say what I thought, and throw personality into it when necessary,” Capell said. “But when you’re trying to get votes, sometimes you’ve got to bring it down a few notches and try to talk more in terms of ‘Here’s the problem, here’s where I think we can solve it.’”

Some local leaders who have been on the receiving end of Capell’s criticism over the years are quietly enjoying this change.

“It has been fun, I think, for all of us to have some gentle barbs with Jeff now that he has become an elected official - now that Jeff is the establishment,” said Hamilton County Commissioner Todd Portune.

Over the years Portune and Capell have been both allies and opponents on various issues. And Capell was a frequent visitor to county meetings, where he often attacked spending projects.

“It will be fun to watch him as a council member in Blue Ash,” Portune said, smiling. “I suspect that we will see Jeff compromise on a few things … elected officials do not have the luxury of being zealots.”

Lol. The #CincyStreetcar is a trainwreck, even when the cars aren't physically crashing into each other. https://t.co/zi9zULsbvT

Nowadays Capell may be known for his staunch, pointed opposition to FC Cincinnati’s quest for a new stadium to win a Major League Soccer bid.

Last May he created a new anti-tax group, No More Stadium Taxes, to stir up opposition. He formed the group with attorney Tim Mara to fight any plans to use public dollars for a soccer stadium for FC Cincinnati, stadium improvements for the Bengals or renovations to U.S. Bank Arena.

“I think we play an important role because without us, unfortunately, and a few other people like us, the public will only hear one side of the issue,” Mara said. “When it comes to spending, so many political figures are quick to spend the public dollar without taking a step back and thinking is it … really worth the amount of money being spent?”

Capell used a litany of feisty one-liners to attack FC Cincinnati’s plan as “welfare for billionaires,” and stadiums as a “rip-off for taxpayers.”

6 weeks later, can FC Cincinnati tell the truth and acknowledge they will try to sneak their way out of paying $150 million of property taxes over the next 30 years? https://t.co/JsZrnPxm5p

Not surprisingly, he became very unpopular with FC Cincinnati fans, who booed him at public meetings and attacked him on social media.

Capell just ignored them, he said. An activist, especially one who's been around for a decade, can’t have a thin skin.

He first entered the public fray in 2007 to fight against a sales tax hike for a new Hamilton County jail and safety programs. Voters ultimately rejected it by a landslide.

“They spent a million dollars promoting it, we spent a few thousand opposing it, and we beat it by 56 percent,” Capell said. “It had a very positive impact on me overall.”

After that first victory, Capell was hooked. From there, he fought against red light cameras in Cincinnati, the streetcar, and the city’s sale of its water utility. He campaigned to drop Music Hall from the icon tax in 2014, and helped defeat a city parks levy in 2015.

But through it all Capell never yelled or screamed in public meetings, and was always respectful, professional and consistent, Portune said.

“He’s a true believer. He’s not a fraud,” Portune said. “He doesn’t cater to Republicans or Democrats, he caters to what he believes in, on fiscal matters.”

The Mann/Murray/Smitherman tax hiking two-step: 1) empty your savings for a stadium project to benefit a few billionaires, claim it won't raise taxes; 2) Raise taxes next month when something important needs funding.

Capell spent nine years as a board member of the political group Coalition Opposed to Additional Spending and Taxes, or COAST, before resigning to run for Blue Ash Council in 2017. He didn’t want to be accused of being an advocate for the group if he got elected, he said.

That’s because in 2012, Capell filed a lawsuit with COAST to reverse the sale of Cincinnati’s Blue Ash Airport land to the city of Blue Ash.

Over the years he has been a vocal critic of Blue Ash government. But so far on city council, Capell seems to be working well with everyone.

“So far, Jeff has sought out data and based his analysis on that information," said Blue Ash Mayor Tom Adamec. "If he continues to seek out facts and information, including from the administration, and bases decisions on what will provide the most value to citizens he will do well.”

Now that he’s a councilman, Capell has toned down his activism -- and his rhetoric.

“On Twitter I’ve cut back a bit on how much I do that (argue), especially with people who are argumentative and have no point," Capell said. "I try to focus a little more on having discussion than having debate. That’s one thing that’s changed in the past few months.”

He is also learning to compromise in an effort to represent all of his constituents.

“I’m already using a lot more ‘we’ and a lot less ‘you guys need to do something,’" Capell said. “You’d better be doing that if you’re the elected official and now you’re one of the people making the decisions.”

But Capell doesn’t want to change entirely now that he’s in a position of power. He is still a champion of transparency in government, and not doing deals behind the scenes.

“I don’t want to become an establishment hack or someone who stops listening to what citizens want,” Capell said. “I don’t want to evolve out of that, because, plainly, people like the persona that I ran on.”