After more than 17 years and $1 billion, Reifsnyder retiring from Greater Cincinnati United Way 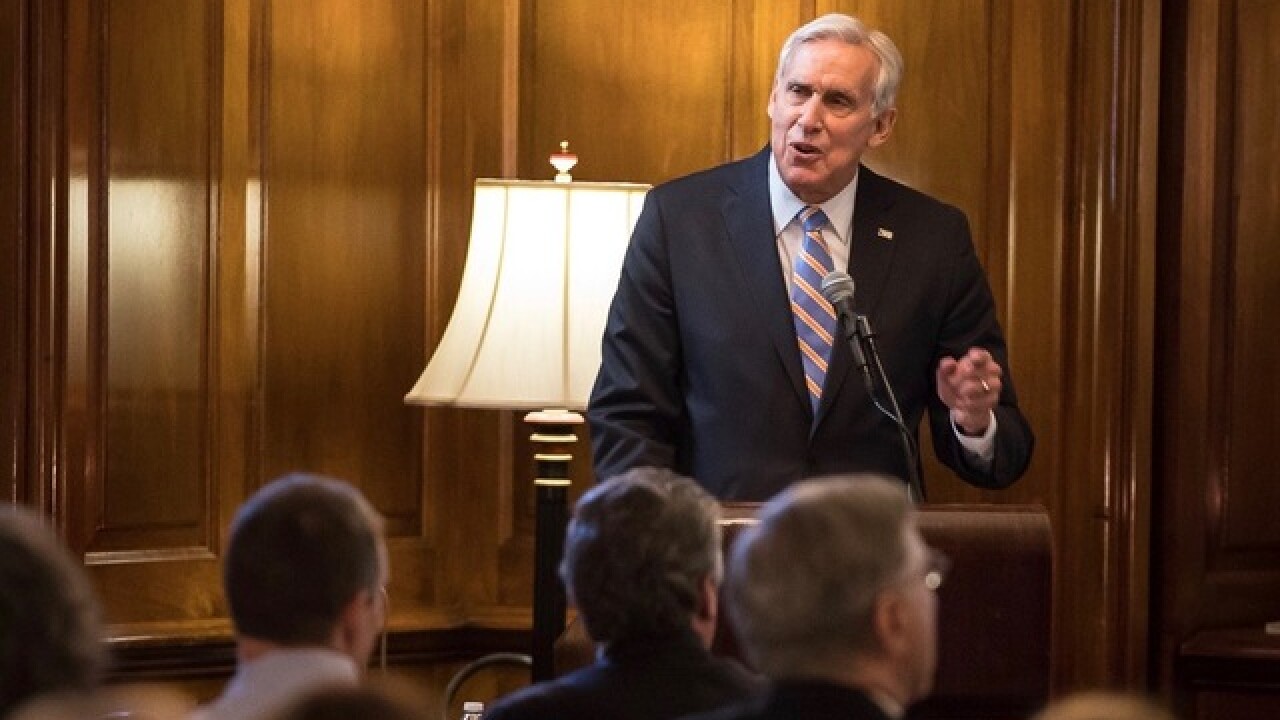 Copyright 2018 Scripps Media, Inc. All rights reserved. This material may not be published, broadcast, rewritten, or redistributed.
Matt Steffen
<p>Rob Reifsnyder speaks to the Tocqueville First Tuesday luncheon on May 1 at the Queen City Club.</p>

CINCINNATI -- Rob Reifsnyder will spend his last few days as president of United Way of Greater Cincinnati the same way he's spent each workday for his more than 17 years in the role.

"It's usually a pretty long day," Reifsnyder said with a smile. "My new theme is: Happiness is a leisurely breakfast."

Reifsnyder's work ethic and seeming ability to be everywhere helped grow United Way's presence and impact in Greater Cincinnati during his many years at the helm. Those who have worked closely with him say that when he retires May 31, he'll be leaving the organization in a position of strength.

"Rob has done a remarkable job of just leading the community around important goals and assembling an awesome team," said Julia Poston, managing partner at EY's the Cincinnati office and chair of United Way's board of directors. "We've raised way above our weight class as a community."

In fact, United Way of Greater Cincinnati has raised more than $1 billion during its annual campaigns since Reifsnyder became CEO in 2001, and he has helped grow the organization to the sixth-largest United Way in the nation.

Reifsnyder, 65, spoke at United Way's Tocqueville First Tuesday luncheon on May 1 to share his thoughts about his legacy and the future of United Way. WCPO sat down with him for an exclusive interview a few days later. Between the luncheon speech and the interview, Reifsnyder shared lots of insights about what United Way has helped the community accomplish and the challenges ahead.

He knows more than a little about the organization, and not just because of his long tenure here.

A native of Philadelphia, Reifsnyder has spent his entire 43-year career working for United Way in some capacity.

Could United Way go out of business?

He started as an intern after graduating from Princeton University and then worked for a small United Way in Massachusetts for a couple of years. He worked at Greater Cincinnati United Way, back when it was known as the Community Chest, from 1979 to 1986. He left to become president of Metro United Way in Louisville, where he held the top job from 1987 to 2000, before leaving to take the top job in Cincinnati.

Even after he retires, Reifsnyder will be consulting with United Way Worldwide part-time, helping new CEOs get familiar with the organization's network.

"If you come into a United Way president's position from outside the United Way, you really don't know what you don't know yet," he said.

Reifsnyder knows he is proud of that $1 billion the community has raised in United Way campaigns since he became the CEO, but he's even more proud of what that money has done and continues to do, he said.

Under Reifsnyder's leadership, the United Way here has led the charge on kindergarten readiness through Success by Six and job training through Partners for a Competitive Workforce. More recently, the organization helped convene the Child Poverty Collaborative and supported Cincinnati Preschool Promise.

"I think United Way has helped change the conversation in this community around a number of efforts," he said. "In business, what gets measured gets done, but in the community we really hadn't been measuring in the same way."

The biggest challenges ahead will be for the community to sustain that work and to help scale it to reach more of the region's families in need, he said.

In his May 1 speech, Reifsnyder warned those community efforts could be jeopardized by new fundraising trends that threaten United Way's annual workplace campaigns.

He took aim at a trend where companies are using digital platforms that allow employees to give to whatever cause they want at any time of year.

"In three Cincinnati companies that have adopted these digital giving platforms offered by third-party for-profit companies, these companies' United Way giving has dropped from $2.5 million to $700,000 in two years," he said in his speech. "This trend line puts United Way out of business in the next decade."

United Way needs to survive, he said, because its collective impact is so important.

"The United Ways of Chicago, New York City and Los Angeles were each $100 million campaigns 15 years ago," he said. "Today each is less than $60 million, as the proliferation of nonprofits and changes in giving have, in those communities, apparently reduced the value of a collective, united approach."

To address the trend locally, Greater Cincinnati's United Way will begin offering "Salesforce Philanthropy Cloud" this year, a system that allows companies' employees to "give to anything" along with a United Way campaign, he said.

That doesn't mean Reifsnyder is opposed to people being able to give directly to organizations or causes that matter to them, he said.

He just wants people to understand the importance of supporting organizations such as United Way, ArtsWave and the Cincinnati USA Regional Chamber that work to address larger community problems and interests.

"There do need to be a few places where the community comes together because individual agencies are not going to help program our way from poverty to self-sufficiency," he said. "Individual agencies cannot individually help move more children to kindergarten readiness."

Reifsnyder and his wife of 43 years, Gretchen, are big supporters of United Way themselves, he said, but they also give to efforts that are more aimed at their individual interests and passions.

Coming together for the good of the community is as important as it ever was, but it's getting increasingly difficult to do, he said.

"We've become a much more united community over the past 15 years," he said. "But we're in a divisive time, and it's much easier to attack than it is to join."

Even after retirement, Reifsnyder said he will continue to be involved in the community work he has helped oversee for so many years. He has no plans to grow a David Letterman-style beard or lead protest marches, although he said his wife is looking forward to being able to put political candidates' signs in their yard.

Reifsnyder said he was "immediately impressed" with Michael Johnson, the Chicago native hired to be United Way of Greater Cincinnati's next CEO.

"I honestly think the community's going to love him," Reifsnyder said. "They're going to take to him immediately, and I think he has a great chance to provide great leadership here."

Although Johnson will have big shoes to fill, both figuratively and literally, Poston said, she's confident he will build upon the strong foundation that Reifsnyder leaves behind.

"It's really a perfect hand-off of the baton," she said.

Lucy May writes about the people, places and issues that define our region -- to celebrate what makes the Tri-State great and shine a spotlight on issues we need to address. Childhood poverty is an important focus for her and for WCPO. To read more stories about childhood poverty, go to www.wcpo.com/poverty.