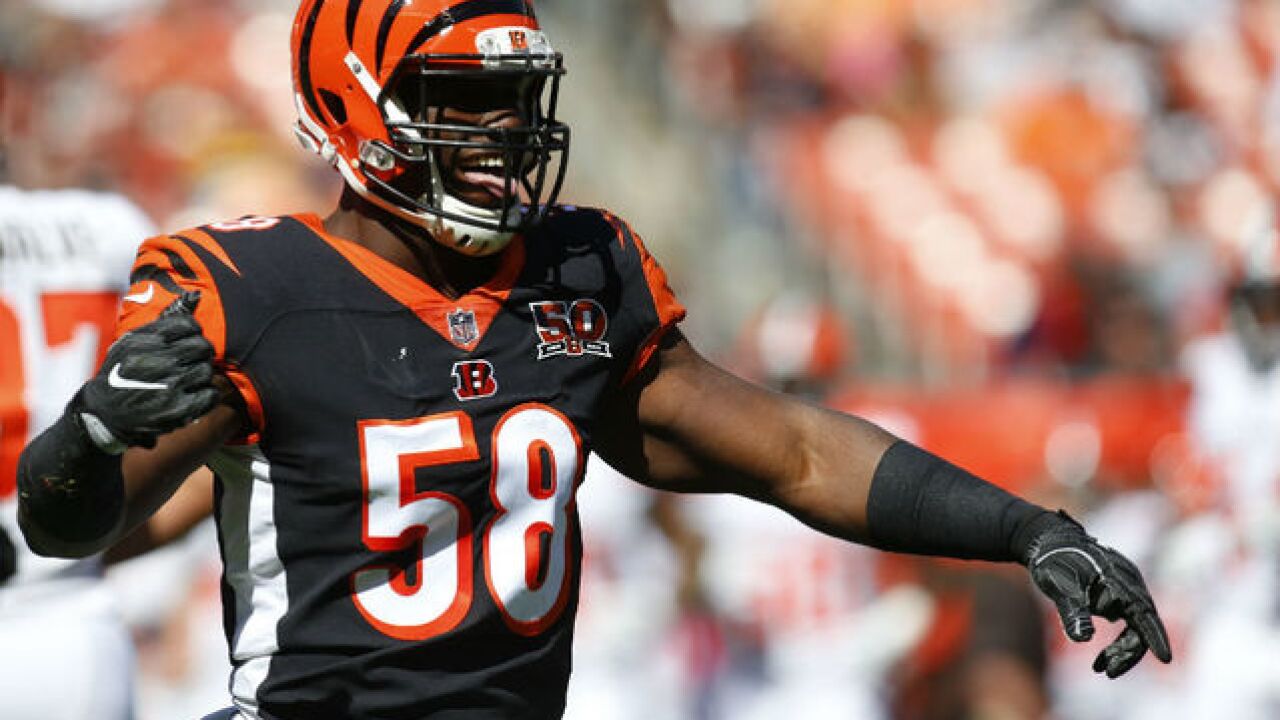 Image copyright 2017 Getty Images. All rights reserved. This material may not be published, broadcast, rewritten, or redistributed.
Justin Aller | Getty Images
<p>Carl Lawson celebrates a play in the first half against the Cleveland Browns at FirstEnergy Stadium on Oct.1, 2017. (Justin Aller/Getty Images)</p>

CINCINNATI -- Carl Lawson is coming off a breakout rookie season, but he knows he can do better.

The second-year Cincinnati Bengals defensive end led all rookies with 8.5 sacks despite playing just 41.6 percent of the defensive snaps last year, and he spent the offseason immersed in film, lifting weights and preparing to dominate even more this season.

Although he is listed as the third-team right defensive end on the team’s first depth chart released last week, Lawson is expected to handle a greater workload in year two as he shifts from outside linebacker to defensive end.

He’s a third-down, pass-rush specialist with a goal of being “the best ever.”

“Play in and play out, my goal is to be a dominant player,” Lawson said. “Last year doesn’t matter anymore. It’s a new year, and I’ve still got something to prove.”

Lawson came into Cincinnati with a chip on his shoulder after falling to the fourth round of the 2017 draft – after he was projected to go in the first or second rounds.

He set the lofty goal of recording 10 sacks, which would have been enough to beat Carlos Dunlap’s rookie sack record of 9.5, and by Lawson’s calculations, he achieved that mark. Two sacks were negated by penalties, one because there were too many men on the field, which Lawson said should have been challenged.

Regardless, his 8.5 sacks were impressive as only Geno Atkins had more for the Bengals – leading by half a sack. But, Lawson said he doesn’t view Atkins or Dunlap as his competition for stats and accolades. He’s just competing against the numbers and records.

“I've never been competing with Carlos or Geno,” Lawson said. “My goal is to be the best ever so I compete with the highest possible standard. I'm not really competing with those guys. Even if I don't come close to it or I fail, I know I've put my best foot forward.”

Always one to spend hours watching film, Lawson reviewed each game last year at least six times between the offseason and training camp just to learn more from what he did as a rookie. He remembers every sack and just about every play he made.

The 23-year-old took what he learned from film and made some tweaks to his physical preparations, too. Lawson, listed at 6-foot-2, 260 pounds, returned from the offseason looking noticeably stronger in his upper body, and, he said, in better football shape than a year ago.

“I cut out a lot of long-distance sprinting and just focused on football shape, focused on just being explosive and powerful and having a good change in direction and then just lifting a lot more while keeping the same flexibility that I had,” Lawson said. “I hadn't been lifting a lot before. My rookie year I was trying to be more flexible because I was always naturally strong. Now I was already strong but I added lifting more so I feel that's going to help with my power.”

The former Auburn standout will need that power when matching up against offensive linemen much bigger than he is, but Bengals coach Marvin Lewis insists his role won’t actually change that much this year.

Lewis expects Lawson to still play some outside linebacker, where he has the advantage of going up against a running back, rather than a lineman.

“He still has to be able to do both things,” Lewis said. “I think the biggest thing that was true for Carl at Auburn and still continues in the NFL after his first season is by limiting his exposure, we're going to get more production. He's not that big of a person, so to go out and bang with the big guys all the time is not going to be beneficial to him and what he's going to get done at the end of the game when you need him to.”

Lawson said he feels he is a better fit at end, but playing linebacker last year helped give him a better understanding of the defense as a whole and a better perspective of what the opposing offense is trying to do.

Now he’s trying to channel that into what he does at end, and his teammates have taken notice of the improvements in his game.

“Carl is going crazy as a defensive end, getting back there and getting pressure on the QB,” fellow second-year player and linebacker Hardy Nickerson said. “Even last year he was doing that. He came into the league and just dominated, and there’s only room for him to improve. I would expect big things from him this year, too.”