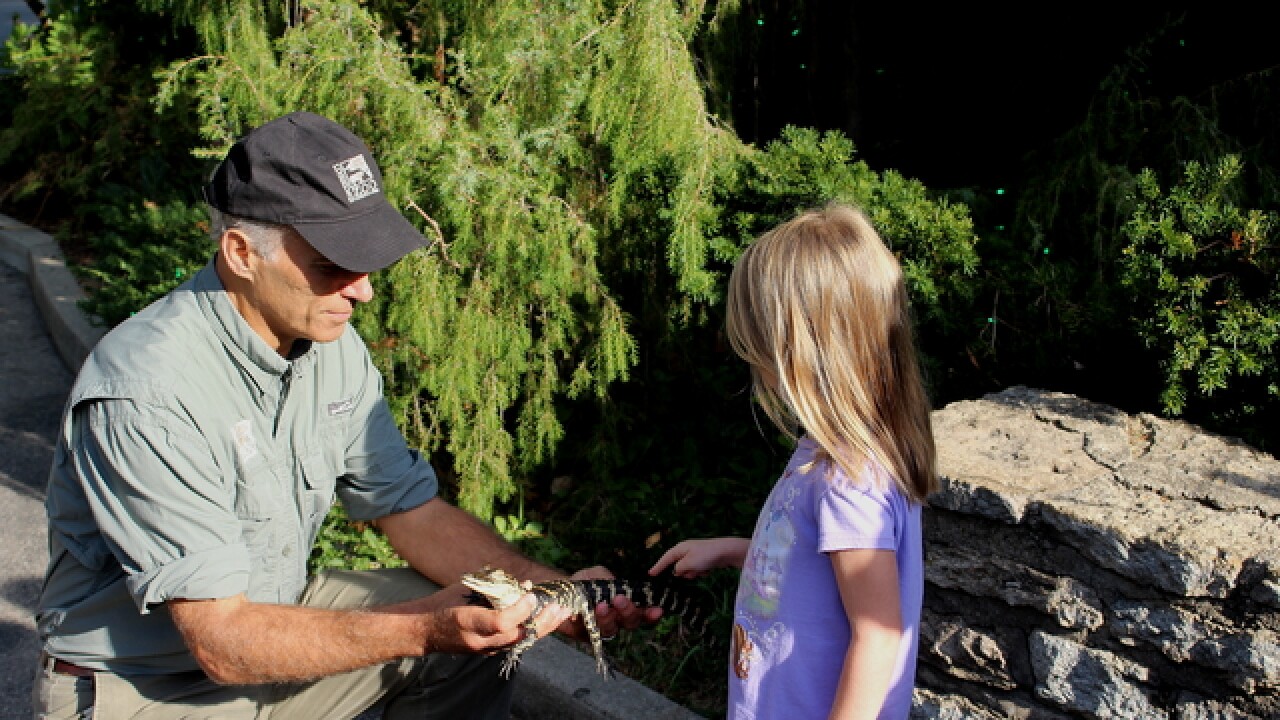 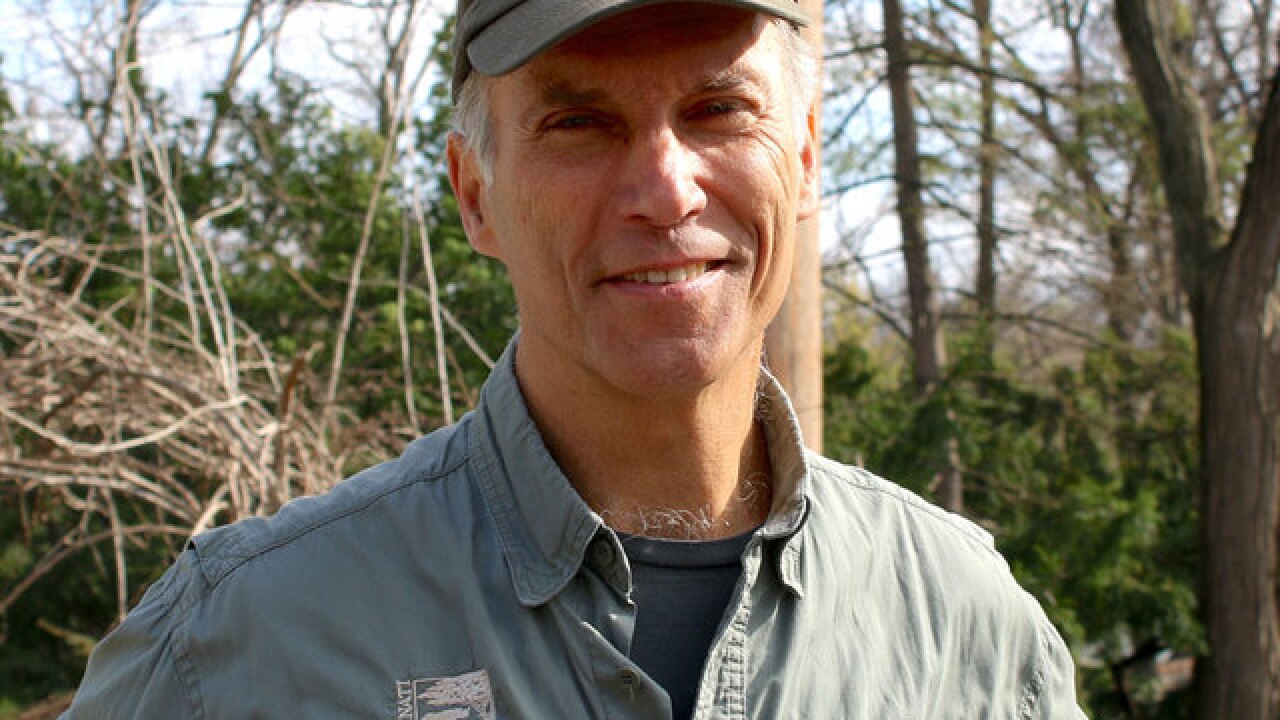 CINCINNATI -- Forty years ago, University of Michigan grad student Thane Maynard received an offer to work at the newly built Procter & Gamble Education Center at the Cincinnati Zoo. After hearing the news, he said, the dean summoned him to the office to tell him not to take the job.

Maynard said he politely listened, but took it anyway. With a starting salary of $9,000 a year and his wife hailing from the area, he figured, "What the heck."

"I was fortunate, completely just the right place at the right time," Maynard said. "I talked to the director, one thing led to the next, and I started on Halloween day 1977."

As a self-proclaimed hyperactive, Maynard suggests we walk and talk during our interview. Touring the zoo grounds with Maynard is like getting treated to the extended-play version of his radio program, the "90-Second Naturalist." Every animal, building or bush we pass has a story.

It dawns on me: it's 20 minutes in and I haven't asked a single question.

I'm obviously not the first to be captivated by Maynard's tales.

"Thane is the best storyteller you'll ever meet," Angela Hatke, digital engagement and publicity manager, said. "I could listen to him tell stories of his adventures and misadventures for hours."

Focused now, I ask Maynard how he keeps that contagious level of enthusiasm after all this time.

"We have fun here and we have a great team," he says. "Zoos are exciting and creative places to work; that's why we never leave. I can't think of a related field where people still love it after 40 years."

With so little turnover, Maynard explains, getting hired at zoos is increasingly difficult; most candidates possess advanced degrees or research experience. He says that over the years, he's witnessed revolutionary changes in the industry, including women now dominating what was once a male-driven field.

Then of course there's the renaissance in animal care, which began in the '70s, he says, where zoos began to remove bars and cages to create enclosures that mirrored natural habitats.

"A keeper's job is a very complex job today," he says. "There's a great emphasis on nutrition and enrichment, in making sure the animals have a good life in a zoo. Zoos are in the animal-welfare business."

Although Maynard has spent a lifetime studying animal behavior, he's often more astounded by that of humans -- case in point the phenomenon of Fiona, the zoo's popular baby hippo. In all his years, he says, he's never seen anything like it. Even while in a remote area of Benin, West Africa, people recognized his zoo hat and stopped him to inquire about her. He says the same thing happened during a bird-watching trip to Belize.

"I look down the way, and some lady is staring at her phone instead of looking at the birds she spent thousands of dollars to see, and I hear her say, 'I'm glad they have Wi-Fi, because I have to keep up with baby Fiona,' " he says.

On multiple occasions, Maynard says, they've thought about dialing back Fiona's internet feed to the public only to be besieged by Facebook, Twitter and email requests to keep it going. He says whether it's Fiona-branded cookies, ice cream or beer, vendors never seem to make enough to satisfy the public.

"She's cute and she's active, she's been saved from the brink, and the whole world's heard about it and it just keeps going," he says.

In the Africa exhibit, we stop by the lion enclosure. Maynard proudly points to a photo of his daughter Lily standing atop a car collecting data while studying lions with the Maasai in the South Rift Valley. He says that in the future he sees more projects like this one, the blending of zoo and field biology to better manage populations. In terms of the future of zoos, he says, the biggest challenge will be keeping genetics pure, as there are only a finite number of animals in captivity to breed.

"CREW's working on bringing in new genes from the field without having to bring the whole animal," he says. "You could collect sperm from wild dogs, as an example, and bring fresh blood lines in without having to import wild dogs."

In terms of his greatest achievement, the zoo director deflects praise like duck feathers in water. Instead, he points to the integral role the zoo plays in the community. He says that whether you walk into Music Hall or onto a Metro bus, everyone has a zoo memory.

"You go into the zoo business because you care about animals and you're going to save endangered species," he says. "But you know what's actually heartening is, I'll be in Kroger and somebody will come up, and they'll not talk about the animals, they just talk about how important the zoo is to their family. That's a really sweet thing."

Although the zoo director's mission is to inspire zoo visitors with wildlife every day, he frequently goes offsite to raise awareness. The zoo's manager of wild encounters and fun, Maura Messerly, says folks are never disappointed by Maynard at public appearances.

"I have the pleasure of spending a lot of time with him traveling around the city to speak to our community, and I always look forward to it," she says. "I know I can always expect great stories and big laughs."

Some of the biggest laughs come at the expense of Maynard himself. Zoo staffers say their boss is infamous for his self-deprecating humor. Communications director Michelle Curley tells of the time she set up an interview for Maynard with a reporter from the New York Times' Style Magazine

"He's often referred to as the 'King of khaki' and only wears two basic earth tones," Curley says. "He knew that she wasn't interviewing him for being on the cutting edge of fashion but agreed to do it anyway. He's able to laugh at himself and roll with anything that comes his way."

Maynard says the women in his life, wife Kathleen and daughters Caitlin, Shailah and Lily, keep him humble. He admits he was pretty proud after publishing his first books about 20 years ago, until his oldest, Caitlin, who's 'crazy bright,' put him in his place.

"It's hard to get books published," he says. "When my first books were coming out, she's about 14 and she says to me, 'You know, Dad, if you get about eight or nine of these things over the years and put them together, it's going to make one real book.' "

If ever a meteor starts spiraling toward the earth, Maynard should be the one to break the news. In his world, the glass is always half full. Cincinnati Zoo chief operating officer Dave Jenike says that in a field that's often filled with predictions of doom and gloom, Maynard exudes an unflappable positivity, especially when it comes to the conservation of wildlife.

"But as Thane would say, 'That's not the story.'

"The story is that for over 40 years he's never lost that excitement to come to work and lead one of the world's great zoos -- one that reflects its zoo director's sense of optimism," he says.

It's time to wrap things up, so I ask Maynard where he'd like his photo taken for the article. Like a kid in a candy store, he gleefully suggests, "Let's get a baby alligator!"

Alligators are Maynard's favorite animal. It's a fascination he says he developed as a kid growing up in Winter Park, Florida.

Once we retrieve baby Cruncher, we go outside the Reptile House for better lighting. As I snap photos, a curious crowd of visitors gathers to see the animal Maynard's holding. After we finish, he turns to an excited group of kids.

As each child and adult takes their turn, Maynard effortlessly rattles off a slew of facts about the American alligator. One little girl seems apprehensive, so Maynard touches Cruncher first then says, "He won't hurt you."

She gingerly touches the tiny gator, then breaks into a smile. It's Maynard's gift, a natural affability that immediately puts people at ease; the kind of person who's never met a stranger.

"He's always challenging himself and his staff. He never, ever, stops thinking about the zoo," said vice president of marketing and communications Chad Yelton.

"People often mistake Thane for Jack Hanna. But I can surely tell you: there's only one Thane Maynard."