In several parts of Cincinnati, affordable housing remains a challenge 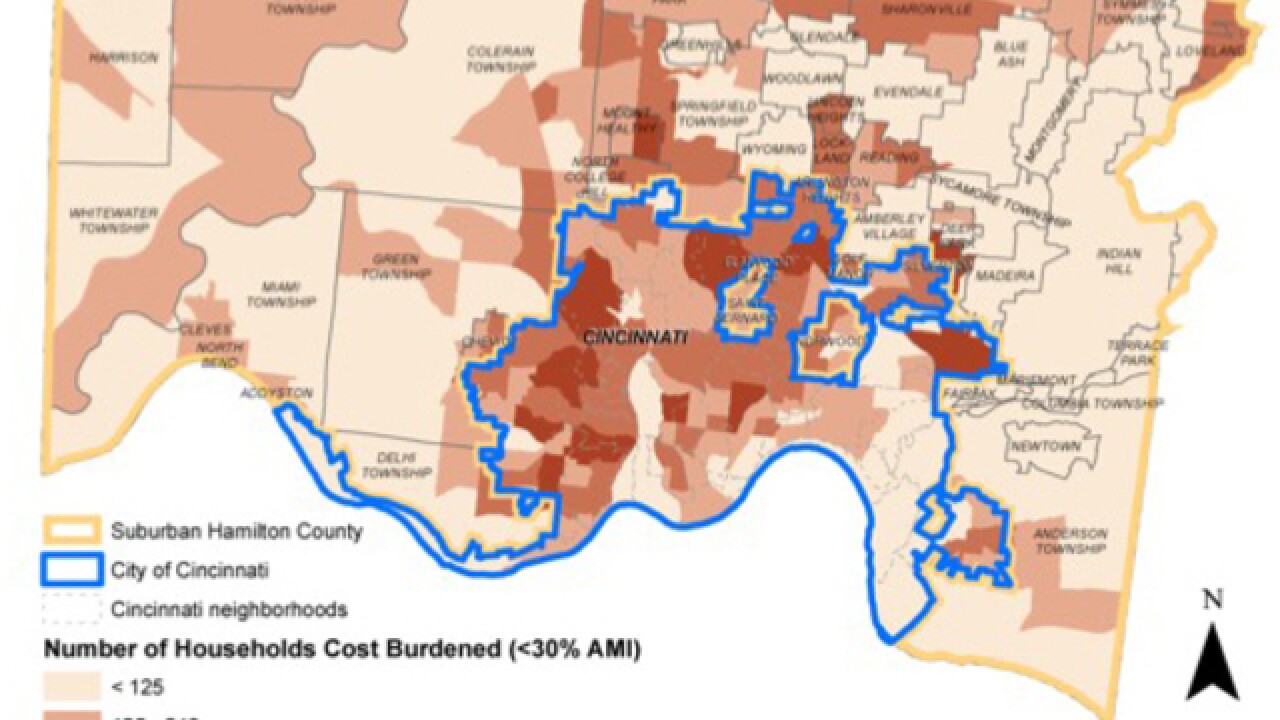 Copyright 2017 Scripps Media, Inc. All rights reserved. This material may not be published, broadcast, rewritten, or redistributed.
Xavier University Community Building Initiative
<p>A look at cost-burdened households in Hamilton County, as determined by housing costs in excess of 30 percent of a household’s income.</p>

CINCINNATI -- Is housing here affordable? What does the “affordable” in “affordable housing” mean? Is it worth affording?

When compared with other urban areas, Cincinnati routinely scores well. It’s not like this is San Francisco or Boston.

A closer look, however, reveals an intractability that has lingered long after the housing crisis of a decade or more ago, with many areas within the city limits in need of hundreds of units to address chronic unaffordability.

Based on a map in a report produced jointly by Xavier University’s Community Building Institute and the Local Initiatives Support Corp. of Greater Cincinnati & Northern Kentucky that was then overlaid with a city of Cincinnati neighborhoods map, WCPO found these 9 areas with the greatest housing cost burdens as defined by the report (in alphabetical order):

The long-observed standard for affordability is from the U.S. Department of Housing and Urban Development, which states that a household should spend no more than 30 percent of its income on housing lest it start to impact other critical parts of a household budget. The nine areas listed above all have at least 500 households that spend in excess of that threshold -- in some cases, much more.

“The question that we tried to ask (in the report) was, of all the humans who live in Hamilton County and all the available housing units in Hamilton County at the price points that we know there are, is there a match?” said Liz Blume, director of the Community Building Institute. “Can everybody who has XYZ income find a house that is available to them at 30 percent of their household income? And the answer is no.”

The report says that, in order to meet the shortfall, 40,000 affordable housing units are needed in Cincinnati alone. According to the U.S. Census, there are 163,000 housing units in the city. The city’s Community and Economic Development department did not respond to requests for comment.

Why do so many pay way too much for a decent dwelling? The answer is rife with irony. The very things one would expect to help lift a family out of that cycle are what may be making the problem worse: a general economic upturn and a bureaucracy designed to address housing issues.

“Three-quarters of rental households in the U.S. that are qualified for some form of government housing assistance, be it Section 8 vouchers, a project-based Section 8 unit or public housing, etc., don’t receive any housing assistance at all despite being eligible,” said Kelan Craig, planning, preservation and development director at the Ohio Housing Finance Agency in Columbus.

“There are millions of eligible families on voucher and unit waiting lists across the country, and Cincinnati is no exception -- which highlights the need for more federal, state and local resources for affordable housing, not less. With respect to assistance eligibility -- it is directly related to the availability of funding. If some eligible individuals or households do not apply for assistance, it is simply because waiting lists are literally closed or they are aware that such lists are years long and don’t bother.”

“I know that some folks struggle who have Section 8 to find landlords who will accept Section 8,” he said in reference to the federal rental subsidy program. “Even though they have a voucher that in theory could be used anywhere throughout Northern Kentucky, there are fewer landlords that are interested in renting to them.”

He said that landlords do that to avoid the inspections and guidelines that come with them.

CBI’s Blume notes the success stories of Over-the-Rhine, Northside, Oakley and Walnut Hills as part of that ongoing recovery from the Great Recession.

Hastings said there are pockets where the market is doing well, which will create a challenge for those with limited incomes.

In terms of what’s out there, “affordable” sometimes hardly equates to “desirable.”

“The biggest issue is that you can find affordable housing in Northern Kentucky; it’s the quality of that affordable housing that is always in question,” Hastings said. “When you see some of the conditions that people are living in, yeah, it’s affordable, but people shouldn’t be living that way.”

Blume said there are probably "crappy units" in some areas.

“But even those units there are not enough of, and those units are often in really poor condition because the market doesn’t provide enough income for people to do regular maintenance or because those landlords just choose to do business in a way that has them producing really crappy units for people," Blume said.

The obstacles are legion, Blume said.

“Evictions and foreclosures do a huge number, as you might imagine, on people’s credit scores and credit rating,” she said, citing the work of Pulitzer Prize-winner Matthew Desmond and his visit to Cincinnati in May. “Once they’ve been through that cycle, then it makes it all the more difficult for them to get decent housing. They just really get into this really awful loop of having to take increasingly worse apartments and probably pay more for them because they’re really desperate.”