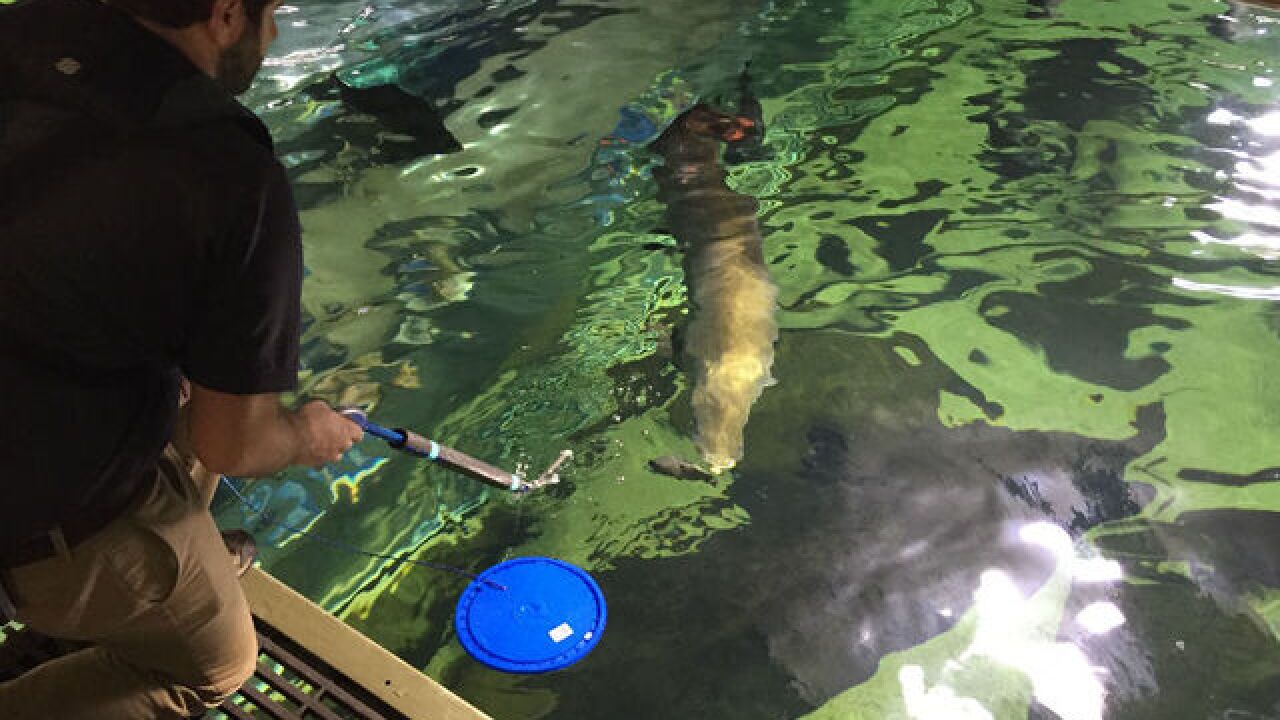 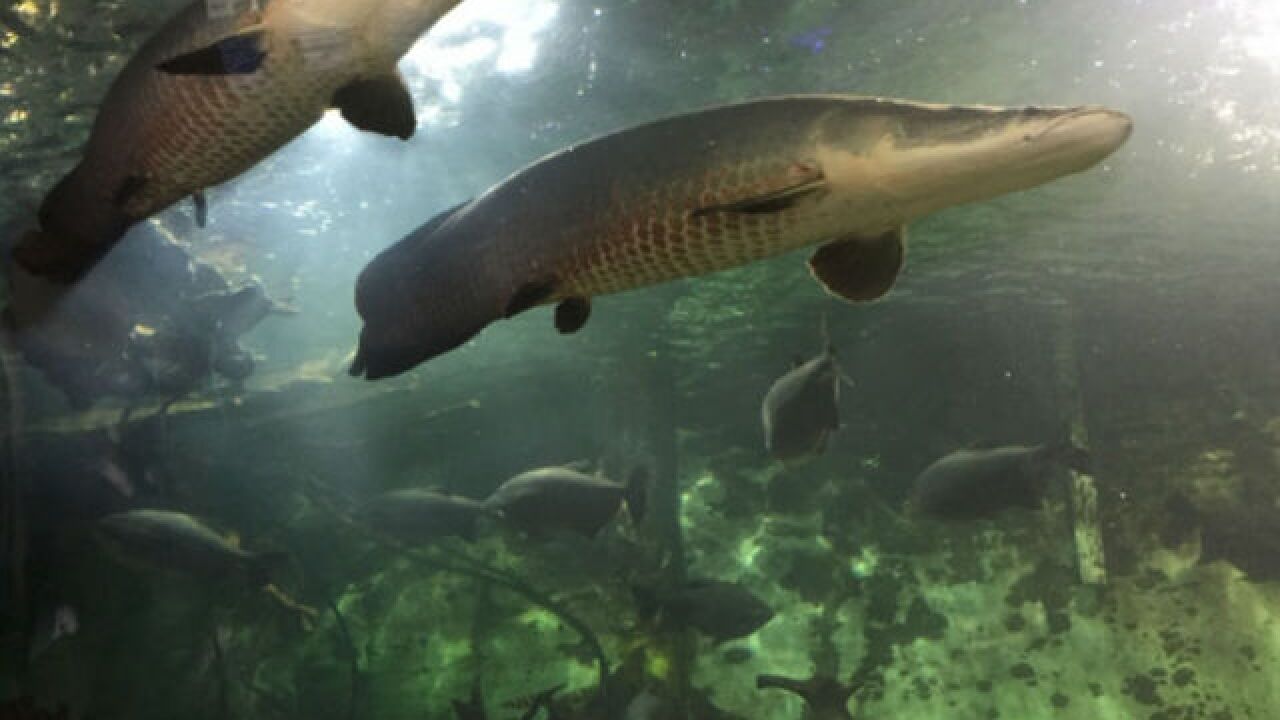 NEWPORT, Ky. -- It’s just past 2 p.m., and four enormous shadowy figures lie in wait just below the surface of the water in Newport Aquarium’s Amazon Exhibit. Feeding commences. While the tank is filled with hundreds of other fish, none challenges these giants for food – the arapaima, one of the world’s largest freshwater fish.

While they may be imposing, especially to fellow fish, Newport’s biologists have trained the iridescently striking arapaima to take part in biweekly feedings. In addition to being great enrichment for the animals, the feedings condition the normally skittish fish to feel comfortable enough to allow divers to perform vet checks and other procedures.

Featured on Animal Planet’s series River Monsters, the arapaima rule the fresh waters of South America, said Newport Aquarium senior biologist Jennifer Hazeres. While fairly aggressive toward other fish, she said the arapaima are no threat to humans and are receptive to training. When staff turn off the tank’s air pumps, she said, it’s the cue that food is on the way either from divers in the water or by hand-feeding using tongs from two platforms.

“If they bit down on your arm it would be like closing a door on it, it wouldn’t even cut your skin,” she said. “We feed them underwater and when they get close, we release the fish, because they hit hard. We use tongs and we don’t want them to grab the tongs, because if they did they could hurt themselves. So we’re really careful.”

Besides being one of the largest, they’re also one of the best-protected, said biologist Ryan Dumas. Covered in thick scales that resemble tiny dinner plates, he said, they’re practically impenetrable. As it’s their nature to aggressively swim and sometimes bash into things, he said the fish are well-equipped to take the blow.

“It’s really hard for them to hurt themselves in here,” Dumas said. “Even if they look hurt, they’re not. They’re just tanks.”

Even with their voracious appetites, the fish tend to be picky eaters. He said the arapaima will always be the first to feed on whatever gets dropped in the tanks, regardless of what it is. In the wild, they’ve been known to eat small mammals such as monkeys, birds and rats. As the fish can jump up to six feet, he said, pretty much anything within reach is fair game.

But he said if the taste isn’t to their liking, they won’t go back for more – as was true with one of the day’s menu items: tilapia. The first one they devoured, but the second sank to the bottom untouched.

“We tried feeding them rats once, but they didn’t like it,” he said. “The first one they’ll always eat, no matter what the food item is,” he said. “And if they don’t like it, they’re not going to do it again. That’s what happened with that last tilapia today, but they always hit the first one.”

As the four are so similar in color and size, Hazeres said, they’re named for features that distinguish them. In the case of Fabio, he was the most perfect of the group with no special body markings and perfect fins. Hercules received his name for being the largest at the time and most golden in color, while Rip Torn has the most tears in its fins. Finally, Spot is aptly named for patches of red color on the fish’s side.

One unique trait for the arapaima is that they’re air-breathers, Hazeres said, so they surface every 10 to 15 minutes to gulp oxygen. In the Amazonian waters, that makes the swimming giants easy targets for spear fisherman. While in some regions the arapaima are diminishing, in others the numbers are increasing because of crackdowns on fishing regulations.

In the Newport Aquarium’s Amazon exhibit, all species within the expansive freshwater, 80-degree tank are indigenous to South American waters. Even though many would be prey for the others in the wild, Hazeres said, in captivity they’re well-fed and tend to coexist fairly well. In the case of the arapaima, four is the perfect number for their 117,000-gallon tank, giving them plenty of room to both swim and hide.

“One morning I came in and counted, and I couldn’t find one of them,” she said. “I thought, ‘How could I be missing a fish that size?’ Later on, they were all there, so I still don’t know where one was hiding.”

In order to provide enrichment for the arapaima and dozens of other Amazon species that share the space, she said, the handlers constantly change up the environment. Besides keeping life interesting by adding or moving features within the tank, she said, it keeps the residents from becoming too territorial as their habitat is constantly changing.

“For some of the more intelligent fish, target training is enrichment, so they have to follow those cues to get their food,” she said. “For others, you can move obstacles around just to encourage them to move around and change up their environment. You want to do everything you can to keep things interesting.”

Eight years ago, Hazeres started at Newport Aquarium as a volunteer diver. She said she pursued a reverse career, choosing to have children directly after college before seeking a job in her field. After her kids started school, she pursued full-time work at her dream job.

“It’s always hard to be a stay-at-home mom and then go to work, but I love it here,” she said. “If you have to go to work every day – just look around – this is a really wonderful place to go to work.”