A night of UFO hunting reveals nothing unexplained, but plenty to ‘oooh' and ‘aaah' about

Night sky-gazing turns out to be its own reward 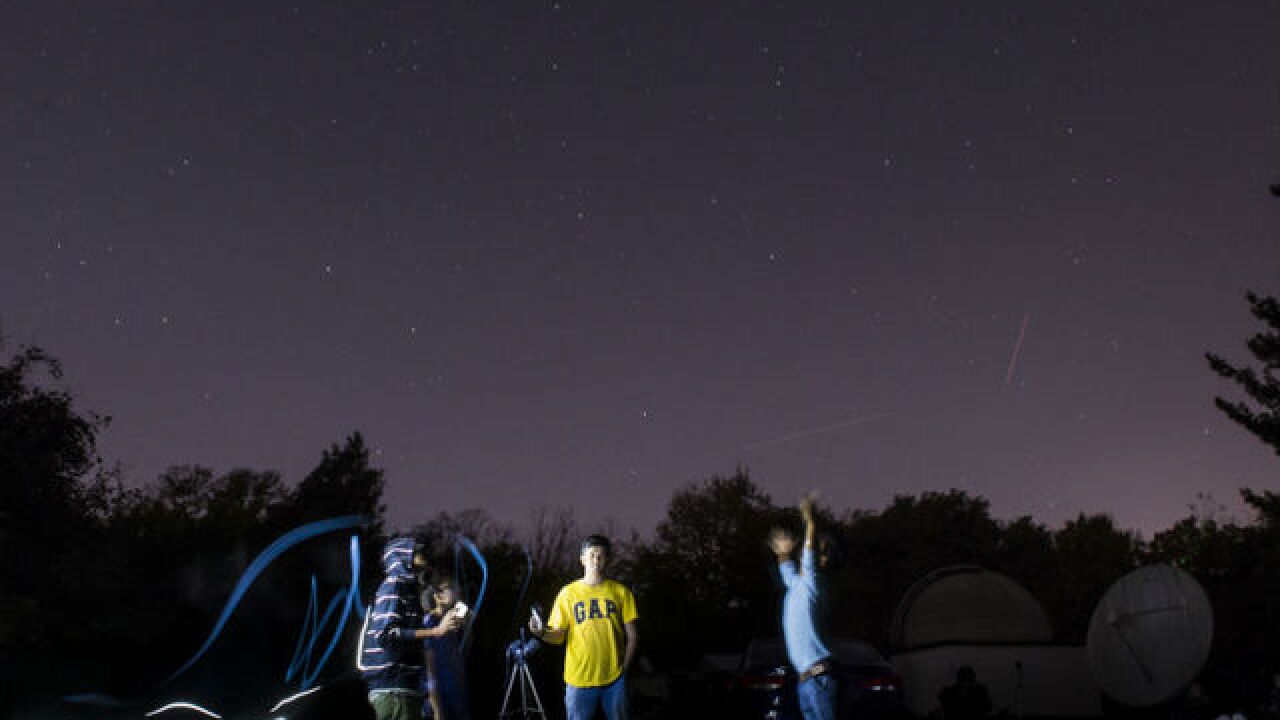 <p>In the spirit of Halloween, writer Ryan Clark and photographer Tim Sofranko joined a group of about 50 UC students, most budding scientists, to view the night sky. The students wanted to see planets and stars; the journalists were searching for UFOs. (Photo by Tim Sofranko)</p>

CLEVES, Ohio -- In the dark, it was hard to see the entrance to the gravel road. In fact, we had to turn the car around twice to find it.

When we did, we found ourselves in the middle of a parking lot surrounded by woods. With the car's windows rolled down, we could feel the cool setting in. It was 10 p.m.

Tim just nodded. It wasn't the first time we'd gone looking for something out of the ordinary. We got out and pulled our gear from the trunk.

Just 30 minutes before, we'd set out in a caravan with 50 college students, each interested in looking up at the sky. We all had different reasons for that. Most of them were budding scientists; they wanted to see planets and stars and galaxies. We were journalists hunting for UFOs.

As the college kids packed up their cars, they passed out maps to make sure everyone knew where they were going. As it turns out, few did.

Ishaun Deore, a graduate student in physics at the University of Cincinnati, just smiled at us.

"No one knows exactly where we're going," he said. "But it's supposed to be really easy to get there."

We laughed at that. We thought it summed up our trip -- and the whole idea -- pretty well.

Chuck Zukowski is a bit of a rock star in the world of paranormal investigation. As a former sheriff's deputy in Colorado, he started getting reports of strange things happening in the surrounding area dating back to the 1980s. There were UFO sightings. Bigfoot encounters. Animal mutilations.

He made it his mission to find out what was behind these tales, which earned him the nickname “UFO Nut.” That’s why he started his own website called UFOnut.com.

In September a book was released about his life called "The 37th Parallel" (penned by the same author, Ben Mezrich, who wrote the books that inspired the movies "21" and “The Social Network"). The book led to more: Networks have lined up to cast him in a reality series, and it was revealed last week that Robert Downey Jr. was in talks to play Zukowski in the film version of the tale.

"It’s not that I’m looking for recognition," Zukowski said of his newfound celebrity. "I’m just trying to get this information out to as many people as possible."

In the book, he describes his theory that a large chunk of paranormal activity occurs along the 37th degree line of latitude that bisects the country, stretching from Virginia to California.

"Think of that line as the middle of the highway," Zukowski said. "Things can stretch into the 36th or 35th degree on one side, or maybe the 38th or 39th degree on the other side. It just seems that for whatever reason, there are a large number of events that occur in these areas."

He is investigating possible reasons but took time out to talk with me about my mission: In the spirit of Halloween, I wanted to search for UFOs, and a good portion of southern Ohio and Kentucky just happen to fall into the area he is researching.

"Yes, anyplace in that area would be good if you wanted to try to see something you can’t explain," he said, noting that several UFO sightings had occurred over the past few months in Kentucky and Ohio. "Of course, you’ve got to be prepared."

Zukowski said any serious UFO hunter must first learn about the things they will see in the night sky -- satellites, planets and the International Space Station, each of which could look strange to the uneducated.

I told him I was going hunting with a group of graduate students who were studying astronomy and physics.

"Oh, that’s great," he said. "Lastly, remember to take a high-powered flashlight. If you see something strange, you’ll want to be able to signal and communicate with it."

'It made no sense'

In the summer of 1986, Tim Sofranko and three friends were killing time on a warm evening in upstate New York. They’d driven into the country, windows down, with no place to be and nowhere in particular to go. They chatted, listened to the radio, and celebrated the way teenagers do when there’s no school and no responsibilities.

The sun had set, allowing a deep darkness to settle in around them.

That’s when they saw it.

In the distance, just beyond a group of trees, there was a blinding set of white lights, rotating and blinking -- but oddly, making no sound.

"Do you see that?" Tim asked from the back seat.

No one responded, in part because they were all watching the strange lights, which seemed to be connected to some kind of structure. Silently, it passed over the trees and hovered away, over the horizon.

"It was like a helicopter, I guess, but it made absolutely no noise at all," Sofranko said 30 years later. "We all just couldn’t figure out what we were looking at. Like -- what we were seeing made no sense. I wasn’t scared, but we also didn’t go chase the thing, either. We just got out of there."

He knew what he saw didn’t belong there. It’s part of what made him want to come out and hunt for UFOs.

Sofranko, who lives near me in Burlington, is a photographer. I’m a writer, and for my whole life I’ve been fascinated with the paranormal. I figured, what better way to celebrate Halloween than to go UFO hunting? I just had to find some scientists to go with us.

When I proposed my idea to Zoe Lee, a mechanical engineering major and astrophysics minor at UC and president of the astronomy club, I thought she’d laugh at me. Instead, she invited me to come with the group to camp out in Cleves and look at the stars.

It took me two seconds to say yes.

We loaded up our car and followed the students to Cleves, which sits on the 39th parallel line -- within the range studied by Zukowski. We turned on to a gravel road that led to the headquarters of the Cincinnati Astronomical Society, which sits on four acres in the Hamilton County Park of the Mitchell Memorial Forest. There’s the small HQ building, four permanently mounted telescopes and a satellite dish that’s been converted into a radio telescope. Outside, down a long wooded trail, the surrounding forest opens into a large clearing, where several other stations were set up by volunteers so students could look at galaxies and other heavenly bodies.

In the headquarters, Tim and I joined the group to listen to the president of the society, Terry Endres, who explained the history of the society and set the agenda for the evening, which featured a viewing of a meteor shower at 4 a.m.

At that point it was only about 10:30 p.m., and of course, the students were excited about staying up all night.

"Sick," said one as he gathered his backpack and sleeping bag. "This whole place is just sick."

Endres explained that the society was established in 1911 and caters to amateurs who want to learn more about things like telescope making, astronomy and stargazing. But I had to know one thing: Had Endres ever seen anything he couldn’t explain? Had he ever seen a UFO?

"I’ve never seen anything I couldn’t figure out when I came back and thought about it," he said.

Undeterred, I followed the students outside where I could look up at the stars and judge for myself.

After watching for just 15 minutes, I saw a beautiful shooting star. The more I watched, the more I enjoyed myself.

In the darkness, I heard students taking advantage of the various telescopes. There was laughter and mingling. As the hours passed, food was delivered and it turned into a wonderful party. In short, UFO hunting was a blast.

We stayed for several hours, learning more about the cosmos and taking in the peacefulness of the stars above us.

Neither of us saw anything we couldn’t explain, nor did anyone else in the group. But before leaving, I spied yet another shooting star, brilliant and bright. It was like someone dropped a love note from the sky, just for me.

Tim and I gathered our gear and prepared to leave when I saw a familiar face.

"Did you see anything, man?" a student asked.

I told him about the three shooting stars.

I’d have to agree, I thought.

Days later, I called Zukowski to tell him I didn’t see anything unusual on my hunt. But I told him the experience was a lot of fun.

"That’s it, right?" he said. "You get to love it. You just keep at it, and then someday you’ll see something truly strange. You want to go back out and do it again, right?"

I admitted I did.

"That’s how it starts,” he said. "Just be careful what you wish for. You just might get it."

For more information about the Cincinnati Astronomical Society or memberships to the society, visit http://www.cinastro.org/