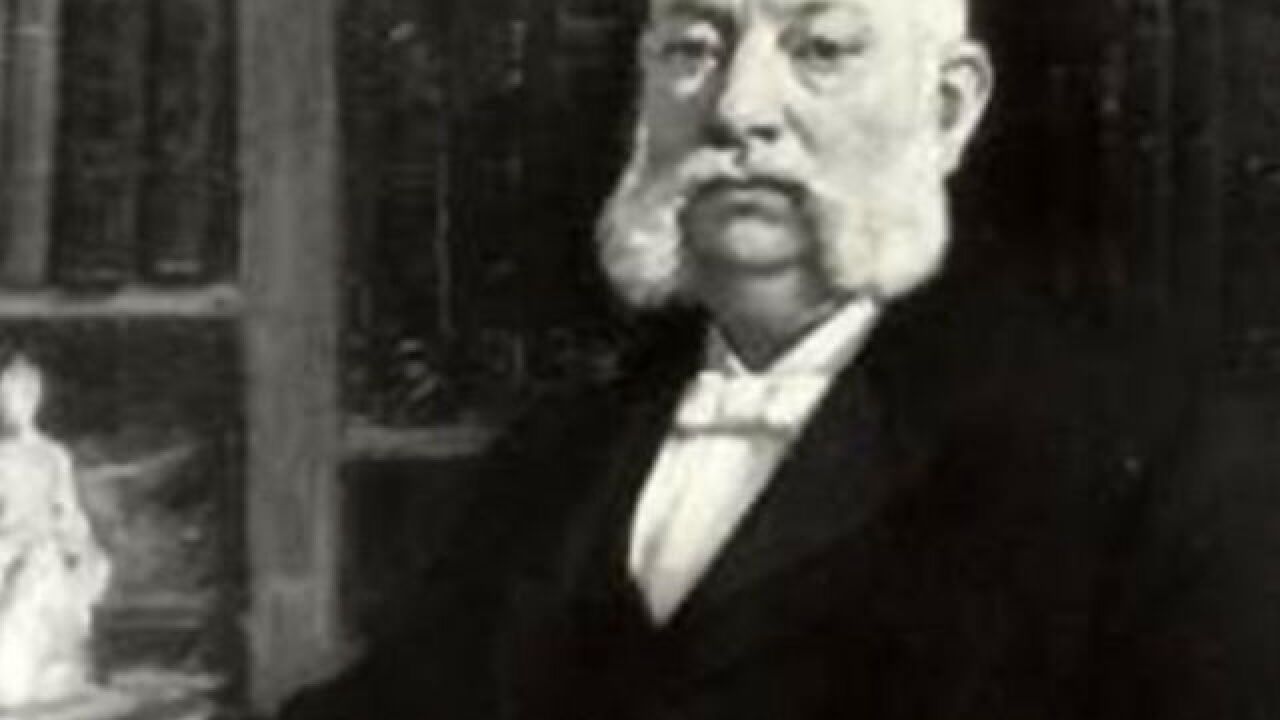 CINCINNATI -- He was our Sir – Cincinnati’s and America’s, the first one of us ever knighted by the Queen of England. He was a first president, too, in his case of the Cincinnati Base Ball Club, which became the Red Stockings.

Alfred Traber Goshorn was also one of the so-called Seven Barons of Clifton, the mutton-chopped owner of a castle-like mansion that rivaled those of his neighboring barons, who included merchant and Fountain Square founder Henry Probasco, Standard Oil tycoon Alexander McDonald and iron manufacturer George Schoenberger.

But that’s enough name-dropping. Let’s stick to Goshorn and why one of Cincinnati’s biggest boosters of the 19th century should be remembered.

Goshorn was born in a house at Eighth and Cutter streets in downtown Cincinnati in 1833. He attended Woodward High School, Marietta College and Cincinnati Law School, joined the bar in 1857 and began practicing law soon thereafter.

When the Civil War broke out, Goshorn helped organize the Pearl Street Rifles, a military company that joined the Seventh Regiment Ohio National Guards. He served 100 days as a captain in the Union Army but saw no combat, having been assigned to help run a prisoner of war camp near Baltimore.

Back home, Goshorn practiced law for 10 years before his love for “base ball,” as the all-amateur game was spelled at the time, and an interest in business took him away from the bar for good.

Baseball was New York-centric in 1866. The Knickerbockers were the top team, but Cincinnati was the Queen City of the West – the New York of the West, you could say – so it was natural that the sandlot game caught on here as well.

Goshorn, by this time vice president of the Anchor White Lead Co., was at the forefront of the game, which was being played locally by teams of many names: Mt. Auburns (future president William Howard Taft’s team), Avenues, Pastimes, Red Hawks, Lightfoots, Banners, Monitors, Arctics, Mineolas, Alaskas and Resolutes, the team some sources report morphed into the 1866 Cincinnati Base Ball Club and, a year later, the Red Stockings.

Goshorn was a natural community leader, a man who had powerful organizational skills and a deep love for education and the arts that he brought to the table as a two-term city councilman, mayor of Clifton, president of the Commercial Club, co-founder and first director of the Cincinnati Art Museum and director of grand industrial and cultural expositions in Vienna, Cincinnati and Philadelphia.

The largest of these showcases, the 1876 Centennial Exposition in Philadelphia – which is considered to be America’s first World’s Fair – required him to supervise the planning, construction and operation of what amounted to an $11 million, fully landscaped city of 200 buildings on 450 acres. Cincinnatians played a large role in the exposition, and their artwork launched the careers of many who led the Queen City into its golden era of art, including Rookwood Pottery founder Maria Longworth Nichols.

The city of Philadelphia presented Goshorn with a silver trophy and a custom-made library of 5,000 bound volumes, each with a page engraved in dedication to him. Those pin-oak shelves, its books and numerous pieces of artwork from Goshorn’s vast collection went to the Cincinnati Art Museum for which he worked so hard but refused to accept the $7,000 salary if offered.

Queen Victoria knighted Goshorn in the late 1880s “in recognition of his courtesies to her subjects during the International Exhibition,” wrote Harry Ellard in his 1907 book, “Base Ball in Cincinnati.” Other nations to honor Sir Goshorn and add bling to his chest of medals included Germany, Spain, Italy, Austria, Belgium, France, Denmark, Turkey and Japan.

On a much lesser scale, Goshorn is one of eight historical Cincinnati men to make the honor roll of the Cincinnati Beard Barons, a charity-driven group of local men of whiskers whose honorees include Gen. William Lytle and Probasco.

Goshorn married widow Marie Louise Langdon Bugher in 1888 but had no children. He suffered a stroke in 1894, the same year she died. Goshorn carried on his civic duties during most of his final eight years, entertaining dignitaries in the Clifton mansion he had built by esteemed architect James McLaughlin. He brought his library shelves and books to the new house in 1888.

His friends and acquaintances knew Goshorn as “General,” but he was referred to as “Sir” in press reports that followed his death on Feb. 19, 1902, at age 68.

A letter to the editor published in the Cincinnati Commercial-Tribune praised Sir Goshorn, who ended his career as president of the New York-based National Lead Co., for his “industriousness, intelligent zeal and administrative abilities,” a man who left “an untarnished record of a blameless career. … he was unconsciously an example of the highest citizenship.”

The letter likely came from Goshorn’s longtime friend and collaborator Probasco. It was signed “H.P.”

Sir Alfred Traber Goshorn, who was a longtime member of Calvary Church in Clifton, is buried with his wife and nine relatives in Section 103, Lot 22 at Spring Grove Cemetery and Arboretum.