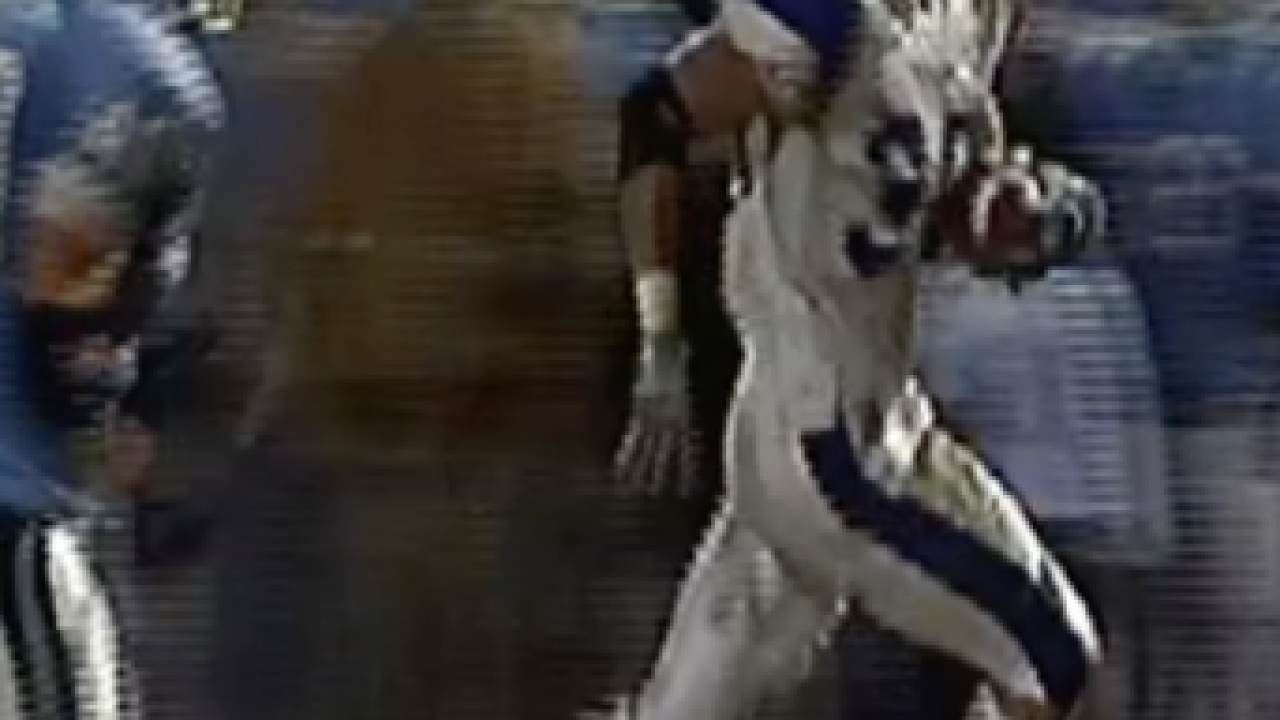 Copyright 2017 Scripps Media, Inc. All rights reserved. This material may not be published, broadcast, rewritten, or redistributed.
<p>Simon Kenton running back Miles Simpson.</p> 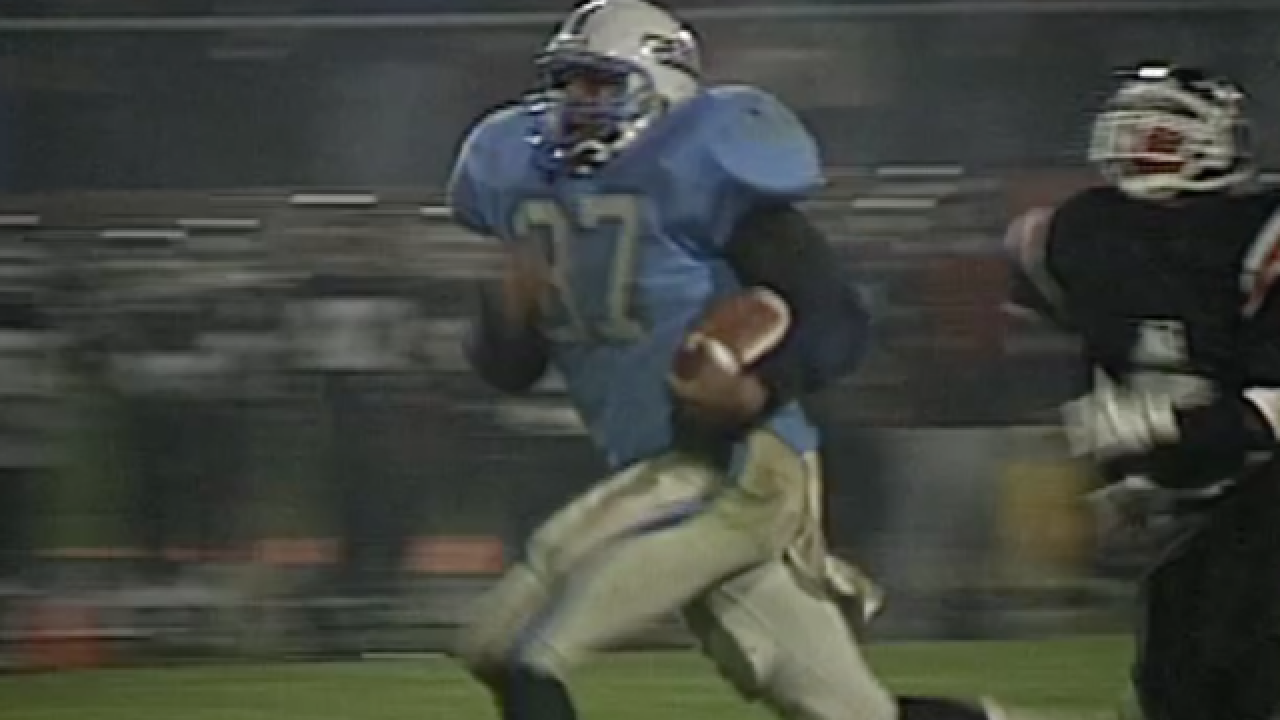 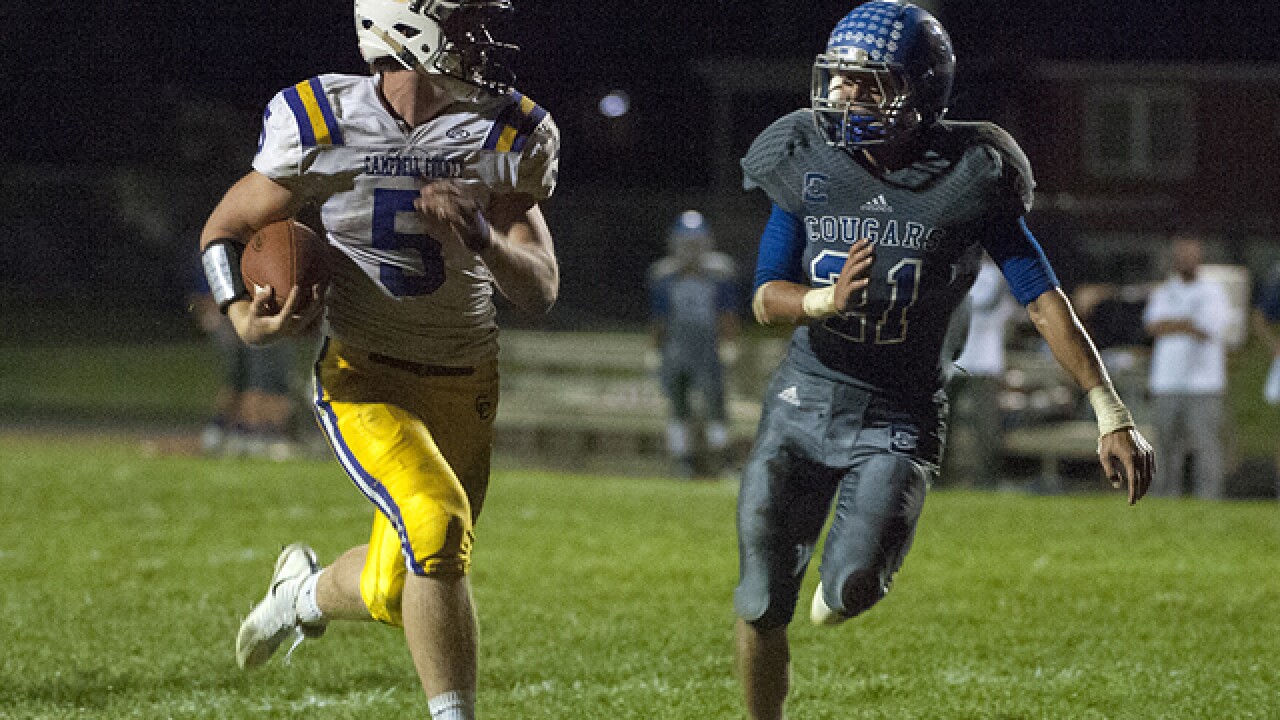 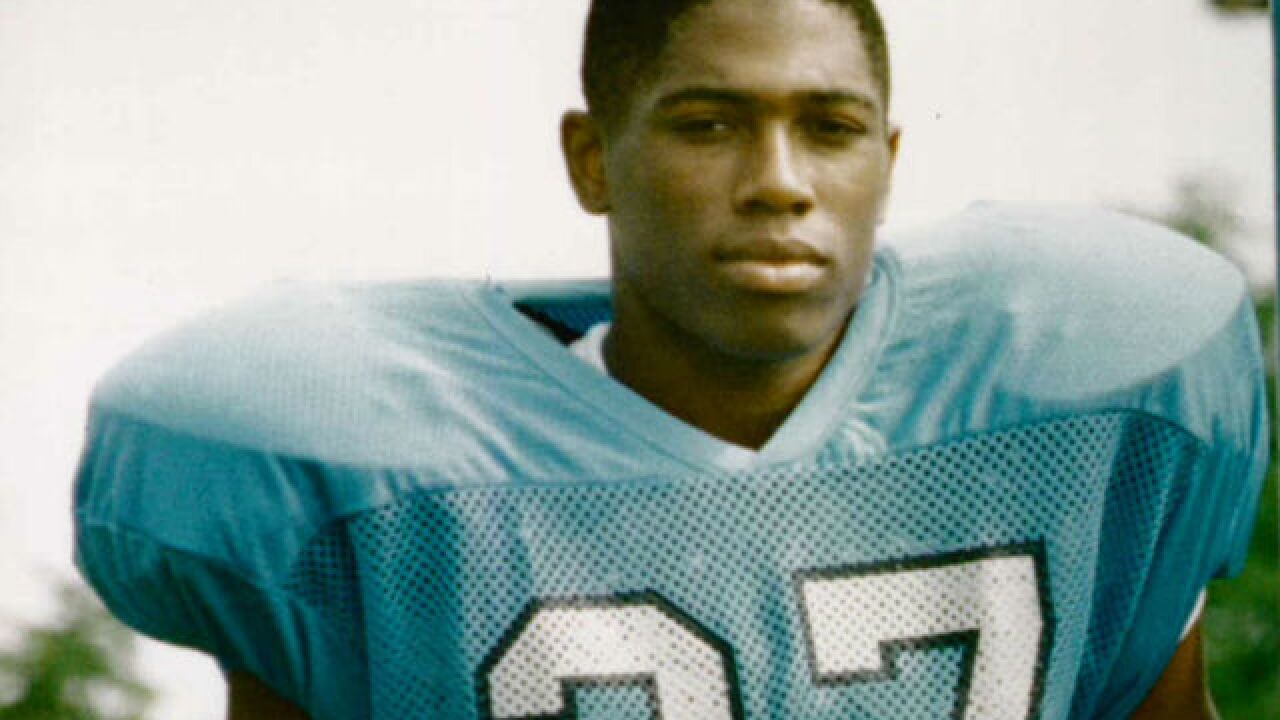 A few Northern Kentucky runners are flirting with 2,000-yard seasons as the 2017 regular season closes.

Ryle senior running back Jake Chisholm has been dominating opposing defenses all season and is 472 yards shy of a 2,000-yard season for the Raiders with 1,528 yards on 180 carries and 23 touchdowns.

Ludlow senior quarterback Justin Blackburn has 1,515 yards on 144 carries with 25 touchdowns and Campbell County senior running back Alex Dowds has carried 157 times for 1,383 yards and 18 touchdowns for the Camels this season. Those numbers for Dowds include 447 yards on 20 carries with four touchdowns Oct. 6 in a 54-28 win at Conner.

As those runners close in on possible historic seasons for their teams, here’s a look at nine of the top rushing seasons for Northern Kentucky runners the past 25 years, starting with the best of all time.

Shaun Alexander was a star from the first time he touched the football as a sophomore at Boone County in 1992 when he ran for a touchdown against Dixie Heights on his first carry. But it was his senior season that cemented him as the most prolific running back in Northern Kentucky football history.

Alexander carried 456 times for 3,166 yards in 1994 with a state-record 50 touchdowns on the ground to lead the Rebels to the state finals. His 326 points that season remain the state record. The yardage still stands as the third-highest total in state history behind Frank Jones’ 3,361 yards for Bath County in 1969 and J.J. Jude, who ran for 3,203 yards for Johnson Central in 2010 to push Alexander to third. Alexander’s 456 carries are still the second-most in state history.

His 104 career rushing touchdowns ranked him in the top-five nationally at the time, ahead of National Football League all-time leading rusher Emmitt Smith and former Cincinnati high-school star Carlos Snow, who had 104 at CAPE from 1983-86. None of the three remain in the top 20 today, however.

Alexander finished his career with 6,662 yards and chose Alabama for his college career. He later starred for the Seattle Seahawks in the NFL and won the league MVP award in 2005.

“I'm not really surprised by what I've done,” Alexander told The Kentucky Post in 1994. “I always knew the offensive line was real good. The first time I ran, I scored. I knew after I learned all the plays I would get better.”

Ricky Buckler took the state by storm in 2009 at a size many would consider small for a high-school back. He stood 5-foot-5 and weighed around 130 pounds.

As a senior, he showed what he could do with 2,851 yards for a 9-4 Bellevue squad that reached the Class 1A regional final. His Bellevue career ended with the 41-20 loss to Beechwood in that regional final in which he led his team with two touchdowns. Beechwood, however, held him to 166 yards on the ground, his second-lowest total of the season.

Cory Farris led the state in rushing in 2007 with 2,824 yards on 409 carries and 32 touchdowns for Boone County. That total was the seventh-best in the state at the time and still stands as the 13th best in state history.

His senior season pushed his career total to 6,227, just behind Alexander at Boone County.

They called him Tree -- mostly because of the pronunciation of his last name, but also because he stood out as the driving force on offense for the 2004 Class A state champs.

Still, the numbers piled up.

“Teams were starting to key on me toward the end of the year, but we didn't want to change what we were doing,” Menetrey told The Kentucky Post in 2004. “It seemed like the more teams keyed on me the harder our linemen blocked and I just ran harder.”

Menetrey and the Tigers beat Danville 23-7 in the state final that season for the program’s eighth state title and first since 1999.

Miles Simpson led Northern Kentucky with 2,309 rushing yards as a junior in 2008 on 284 carries and 37 touchdowns on the ground, the ninth-highest rushing TD total in state history. His 41 total touchdowns and 264 points also led the area, causing folks to start mentioning him as a contender for Mr. Football the next season.

The point total remains the 13th-best total in state history.

Simpson had only carried 70 times as a sophomore while playing defense at safety. But Pioneers coach Jeff Marksberry made Simpson the featured back for 2008 and the junior started early. He ran for 346 yards and four touchdowns Week 2 in a 28-7 win over Dixie Heights.

Simpson and Simon Kenton eventually fell 48-0 to juggernaut Louisville Trinity in the Class 6A state final.

Simpson was not Mr. Football in 2009, but he tore up Northern Kentucky teams for a second straight season with a total of 2,227 yards on 234 carries and 38 touchdowns.

The 38 TDs remains tied for the eighth-best single-season total in state history.

He led the Pioneers to an 11-2 season and a No. 2 ranking in the state Associated Press poll before Simon Kenton fell to eventual state champion Louisville St. Xavier in a Class 6A regional final.
He went on to play linebacker at the University of Kentucky.

Travis Elliott punished opposing teams behind his bruising 5-foot-10, 210-pound frame as a junior in 2010 with 2,215 yards on 283 carries with 32 touchdowns while leading the Raiders to the Class 6A state semifinals where Ryle lost to eventual state champion, Louisville Trinity.

Elliott had game-breaking skills and a play-to-the-whistle mentality that oftentimes earned him more yards after initial contact.

He also played in various spots on the Ryle defense that season.

Steve Everson set a NewCath single-season record with 2,154 yards in 2000 on 367 carries with 27 touchdowns on the ground and became the school’s all-time leading rusher that season as a junior with 4,017 yards total at that point.

He added 1,616 yards as a senior to finish with 5,633 yards and remains among the top 30 all-time rushers in state history.

But the 2000 season in which he eclipsed 2,000 yards and helped an improbable run to the Class A state final was his biggest. He rushed for 885 yards in five postseason games to carry the Thoroughbreds to the state finals for the first time since 1984 before NewCath fell to Danville, 23-9.

Everson and the Breds reached the state final again in 2001 where they lost against to Danville, 14-13.

Justin Frisk rolled up 2,411 total yards in 1996, including 1,932 yards on 209 carries, to help the Bluebirds win their first Class 3A state title since 1992. Frisk accounted for nearly half of Highlands’ offense that season, adding 21 catches for 331 yards and four completed option passes for 148 yards and four TDs.

He was the team's leading scorer with 35 touchdowns overall, including 31 on the ground, two receiving and two more on punt and kickoff returns.

Frisk was one of five players nominated for Mr. Kentucky Football in 1996, but missed out when Fort Knox running back Derek Homer won the award. He put past discipline and academic problems behind him that season and closed his career with 116 yards and two touchdowns during a 21-14 state-final win over Hopkinsville.