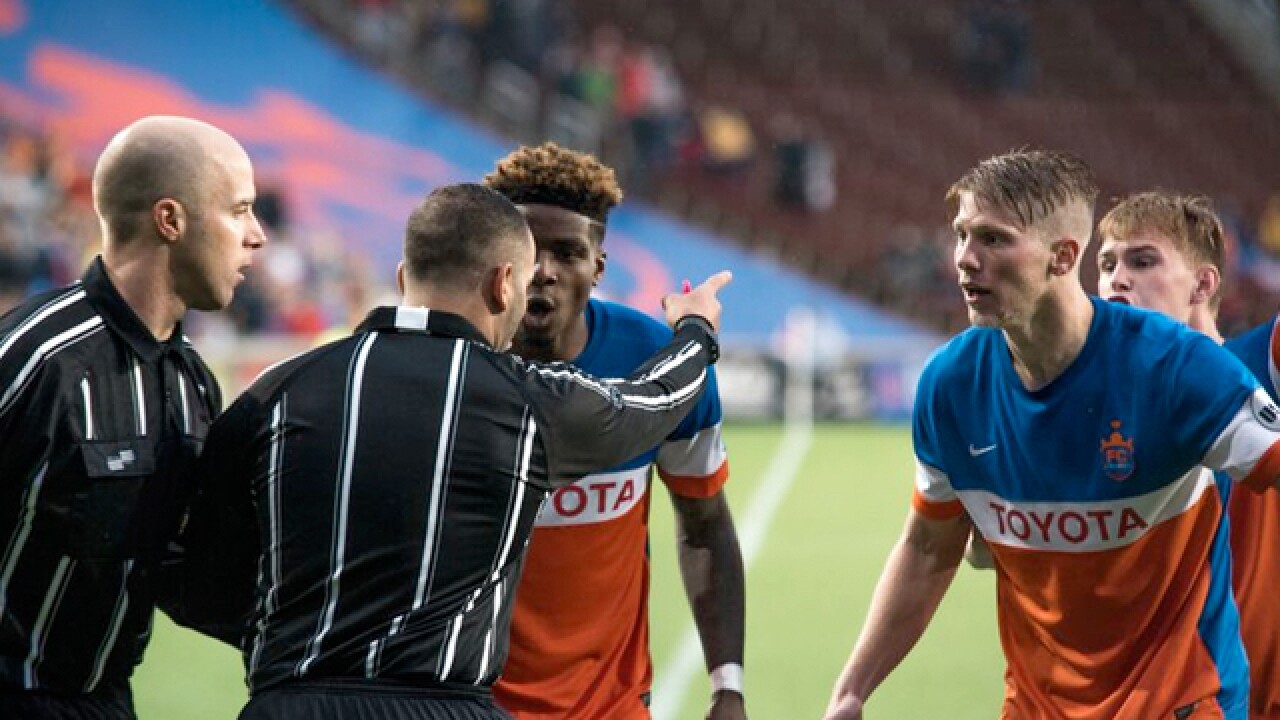 CINCINNATI -- FC Cincinnati battled back from a first-half deficit but settled for its first draw Saturday against Wilmington Hammerheads FC.

After giving up a goal on a sudden shift of momentum midway through the first half, Cincinnati got the equalizer from center back Paul Nicholson in the 49th minute and walked away with a 1-1 tie in front of an announced crowd of 11,318 at Nippert Stadium.

FCC (3-2-1) had several opportunities late in the game and couldn’t come up with the go-ahead goal in rainy conditions.

Here are the top 9 takeaways from the match:

Last week against Toronto, Mitch Hildebrandt made a double-save that led to FCC’s game-winning goal, but this time Cincinnati was caught on its heels following a similarly big play by its keeper.

Hildebrandt came up with a huge save on a penalty kick in the 24th minute after a Pat McMahon takedown in the box, but the Hammerheads still ended up scoring on the ensuing corner kick. Bruno Perone tapped it in from the near post for a 1-0 lead while FCC fans were still ramped up from Hildebrandt’s save.

“I didn’t think we were out of the woods at all,” Hildebrandt said. “They have a big center back that goes forward on corner kicks, so after you make a big save like that, there are a lot of emotions going on and I’m trying to organize, and it’s just unlucky that something like that would happen. … I think we were set, but I’d have to go back at film and look at it. He lost his mark and got a touch on it and it just flew right over my shoulders. We’ll fix that.”

The 1-0 score held up until early in the second half when Nicholson, who was playing in place of injured captain Austin Berry, found himself in the right spot at the right time and executed to tie the game in the 49th minute.

Nicholson’s goal, which came off a rebound from Sean Okoli’s shot that was deflected by John Smits, was called back on an offsides call, but the officials overturned the ruling after a conference.

“I’m not sure if they looked at (the replay on the Jumbotron) or not, but I think it was pretty clear it wasn’t off,” said Nicholson, who played 119 games with Wilmington over five seasons before joining FCC. “I definitely think they made the right call.”

For a second straight game, FC Cincinnati fell behind 1-0 in the first half, but whereas the club had been able to rally for a win last weekend at Toronto, it couldn’t break through this time.

Despite the disappointment of giving up another early goal, FCC coach John Harkes was pleased to see his team battle back. It seems to be a trend as of late.

“Conceding on a set piece after Mitch makes a brilliant save is not an ideal situation, and we have to be better,” Harkes said. “We have to be better focused. They did a good job of setting a pick on the corner, but we shouldn’t fall behind. Our team needs to learn that. We make it harder on ourselves at times. Credit to Wilmington, they came in and competed like we knew they could.

“Our guys battled, showed a lot of resiliency and came back again, as normal, which we’ve seen quite a bit. I love that, it’s great character. You see a lot of them learning from one game to the next and the most important thing is they are absorbing this.”

Harkes felt like his team shouldn’t have been behind in the first place, or at least should have been able to get another goal, but FCC will take what it can get in terms of points.

“Overall, it’s a point gained,” Harkes said. “It’s huge because we got away from home up in Toronto and we fight and battle and we get the result there, we get the three points and it keeps us at the top of the table, and it sends a good message out, sets a good tone as we go on the road. If we’re walking away with this with zero (points), it probably makes it a little more of a challenge, so we take it.”

The announced attendance of 11,318 fans was the lowest in three home games for FC Cincinnati, but still above the club’s target number and still well above the league average. The fairly significant dropoff from the USL single-game regular-season record crowd of 20,497 that showed up under sunny skies April 16 could be attributed to two key factors: weather and UC graduation day.

Forecasts for rain likely kept some fans at home, where they could watch more comfortably on TV or online, but FCC benefited from selling more than 10,000 presale tickets before Friday afternoon. Heavy rains moved into the area late in the first half and picked up again midway through the second half.

FCC had drawn 14,658 fans to its home opener in cold, cloudy conditions April 9.

FC Cincinnati used a different starting lineup for the first time this season, but not by choice. Nicholson found out Friday he would be starting after Berry strained his quad in practice earlier that day. Berry, a graduate of Summit Country Day and former MLS Rookie of the Year, had goals in each of the previous two home games, and Nicholson kept up the trend of center backs scoring for FCC.

“He’s basically day-to-day,” Harkes said of Berry. “It’s unfortunate, especially the day before a game for a key player like that. It’s a great test for us when you have players that can make an impact in the game but at times may pick up an injury at the most inconvenient times, you want to see the depth of the team and shine through, so a lot of good pieces we saw tonight.”

Regarding Nicholson’ play, Harkes said, “It’s a fairy tale for him. I’m happy for him. I think he competed and did well. There’s no surprise to me, to be fair to Paul Nicholson. He’s played 119 games in the league, he understands it and he’s a good leader, and he’s hungry. He put himself in a good spot to make a difference in the game, he finished it well and we were unfortunate not to get another one.”

Former University of Cincinnati forward and 2011 MLS All-Star Omar Cummings made his home debut Saturday, entering in the 71st minute to replace Sean Okoli. Cummings had made his first appearance last Sunday when he came off the bench in the 82nd minute at Toronto and scored the game-winner three minutes later.

He got one shot on goal but didn’t have that same magic touch this time.

8. Improvements to be made

FC Cincinnati’s defense has not yet posted a shutout, and the offense continues to get late opportunities without being able to capitalize. Cincinnati has nine goals scored this season in six games.

For now, Harkes seems most concerned with improving the defense, saying the offense “will come.”

“I’m not pleased we don’t have a clean sheet,” Harkes said. “We’ve got to be better defensively. I think our shape has gotten a little bit better over a period of the last two or three weeks, but I’m not happy we don’t have any clean sheets. It’s something we have to work on.”

Offensively, the club just needs to “be a little more clinical in the final third,” according to Harkes.

FC Cincinnati doesn’t have much time to reflect on the game, as it plays its first midweek game Wednesday at Orlando City B, then remains on the road May 7 at Harrisburg City (Pa.). The turnaround will be even quicker for Orlando, which plays winless Montreal on Sunday before hosting FCC.

Cincinnati will return home May 14.

“We have to take care of ourselves,” Harkes said. “We have a big road trip coming up Wednesday, a big game against Orlando and then we have to travel as well and play a second game. Right now I’m just looking at guys that are healthy and see how we can keep them fit and on the field.”