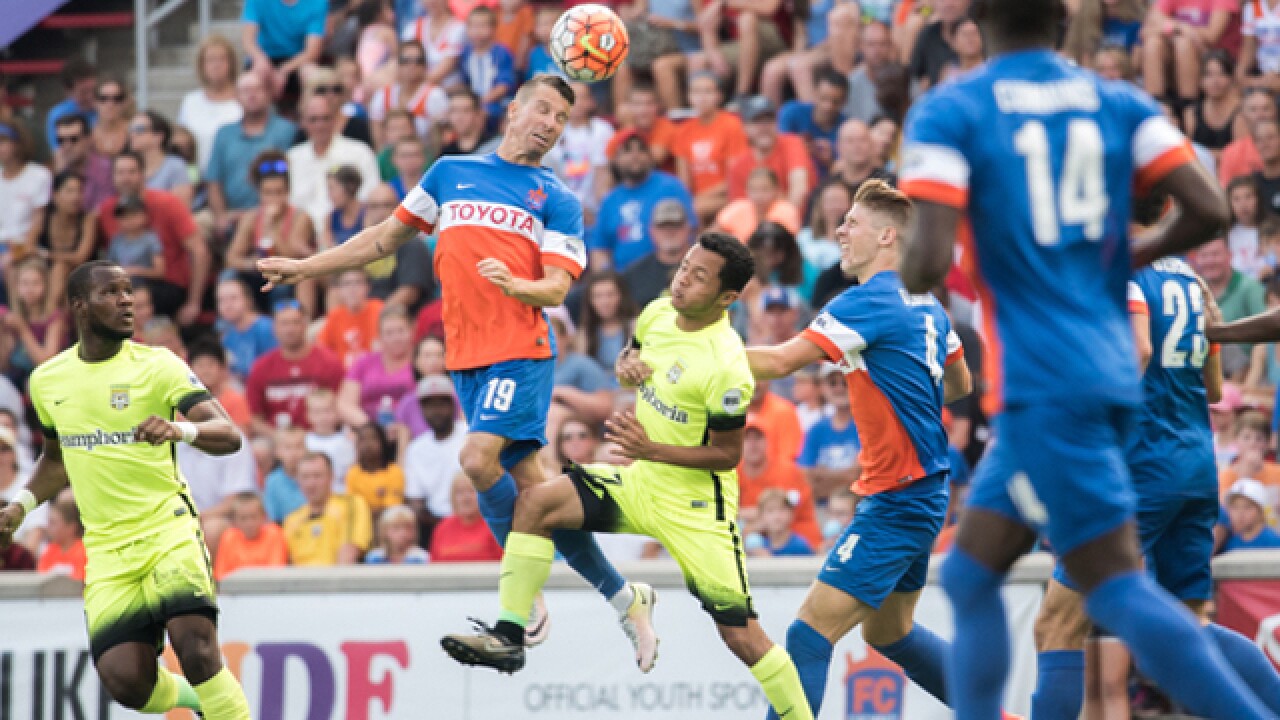 Copyright 2018 Scripps Media, Inc. All rights reserved. This material may not be published, broadcast, rewritten, or redistributed.
Phil Didion
FC Cincinnati's Corben Bone leaps to head the ball during the FC Cincinnati vs. Charleston Battery game at Nippert Stadium on Saturday July 30, 2016. The game ended in a 1-1 draw (Phil Didion for WCPO).

CINCINNATI -- FC Cincinnati had a chance to create a little cushion between third and fourth place in the United Soccer League Eastern Conference table, but couldn’t hang on for the win.

Despite scoring the first goal, the third-place Orange and Blue settled for a 1-1 tie with fourth-place Charleston Battery on Saturday in front of a crowd of 19,229 fans at Nippert Stadium.

FCC remains two points ahead of Charleston, but the gap would have extended to five with a win.

Here are the top 9 takeaways from the match:

Charleston (10-4-6, 36 points) scored the equalizer when Heviel Cordoves headed in Maikel Chang’s corner kick in the 70th minute, but at least this time there was no go-ahead goal to follow for the Battery. Charleston had beaten FC Cincinnati in its inaugural USL game 1-0 on March 26 with a goal in the 94th minute.

The league gave FCC some more help in the table Saturday, as Orlando City B beat Louisville 2-1 on two late goals and Rochester handed New York Red Bulls II a 2-1 loss as well. However, a win for Cincinnati on Saturday would have brought it within one point of second and two points out of first.

FC Cincinnati collected four points out of three consecutive games against the other top four teams, but the Orange and Blue is 1-3-2 overall against those three opponents.

All three losses (one each to Louisville, New York and Charleston) came despite 1-0 leads for FCC.

“We are one of the top teams in the league, so I'm proud of the maturity that's grown with this group and where we're at,” Harkes said. “We were disappointed losing to the Red Bulls. ... But, this is a tough league and nothing is easy. We just keep pushing up. The guys battled well and did very well. It would have been nice to get the win (tonight), but we didn't so we just have to keep a positive frame of mind.”

Much like the first meeting with Charleston, FC Cincinnati dominated possession and created chances, while the Battery seemed content sitting back and looking for the counter. FCC had several close chances in the first half but couldn’t execute, including an Andrew Wiedeman volley that Alex Tambakis made an impressive save on in the 42nd minute.

Charleston’s best chance before the set piece goal came in 16th minute when it overloaded the box, then got a clean look for Romario Williams on a give-and-go, but Mitch Hildebrandt came up with the diving save to push the ball out of bounds. It was the only save Hildebrandt had to make, though the crossbar made one for him late in the game.

“There are going to be games where you dictate play and rhythm and everything else, good possession of the ball, and you're in control and you go 1-nil up, and there are also games where teams sit in and maybe pack it up and make it difficult to play,” Harkes said. “… The guys battled, they fought through a lot of stuff and the creativity on the field was excellent. It was just we were a bit unlucky at times. I thought, could we have gotten a second goal and closed up shop a little bit? Yeah, absolutely, but you always know when teams hang in there, they rely on set pieces and they are dangerous.”

4. A little late on the passes

Harkes stressed in his halftime TV interview the need to play the pass quicker to try to catch Charleston’s defense on its heels, but he still felt at the end of the game his team could have done better in that regard.

FCC finished with 12 shots but just five on goal. Two of those shots were just wide late in the first half, as Jimmy McLaughlin and Eric Stevenson had nice strikes just beyond the far post.

“There were times where maybe we could have pulled the trigger maybe a little earlier and got some shots and tested the keeper a little more,” Harkes said. “We're still not hitting the frame as much as I would like, but it's a tough way to play.”

5. Cummings gets it done

Harkes told WCPO on Friday he still thinks Cummings could finish with 10 goals this season. He netted his third Saturday when McLaughlin sent in a cross that deflected off teammate Sean Okoli before finding a wide open Cummings inside the top of the box. Cummings followed through on a one-touch shot to the far post.

“Once I saw Jimmy got the ball, I knew that ball was going to come in on a cross, and once it came low, I was just trying to feel like, 'This ball is coming to me,'” Cummings said. “I tried to anticipate that ball coming off Ugo (Okoli), and as soon as it did, it was one touch to the goal and I just tried to land it to the far post.”

Cummings has been a huge spark for the team, especially the past month as he’s worked his way into the starting lineup despite missing seven games while coming back from injury. He has three goals and four assists in 13 games.

Kenney Walker (foot) is expected to be out another two or three weeks, but Paul Nicholson (hamstring) was a game-day decision to hold back after he wasn’t able to pass a fitness test Saturday morning.

FCC especially will be hoping to get Nicholson back this week after fellow defender Harrison Delbridge picked up his fifth yellow card of the season, which disqualifies him for Wednesday’s game at Montreal. Nicholson and Delbridge played center back together while Austin Berry was previously out with an injury.

“It's great opportunities for other guys to step up,” Harkes said. “They've been working hard throughout the whole season, and the depth in our club, we've seen it come through at times. It's been very, very good. We obliviously would like to have everybody back and healthy, that's key, especially going into the
August month with how hot it is and travel, but we've proved you have to rely on depth.”

Charleston played a physical game and finished with 14 fouls, while Cincinnati had just two. Both teams had one yellow card, but Delbridge’s was especially costly.

Delbridge was cautioned after taking Williams down as he tried to turn toward goal after receiving a pass to feet from midfield.

“You can’t think about how many (yellows) you have,” Delbridge said. “You have to do what you have to do. It's unfortunate I picked it up, but there are guys that will come in and take care of us, and I'll be watching I guess.”

Okoli also has four yellow cards and was pulled in the 70th minute to avoid Delbridge’s fate.

It’s been a tough stretch in the schedule with three consecutive top 4 matchups in Eastern Conference play since July 20, all of which followed a competitive friendly with English Premier League side Crystal Palace.

FCC heads to FC Montreal for a rare midweek afternoon game on Wednesday, then gets a 10-day break from action before traveling to Richmond. Cincinnati has another 11 days between games after that, as it returns home Aug. 24 vs. Rochester. The Orange and Blue has just three more home matches on the regular-season schedule with the next Saturday game not until Sept. 17.

Fans took advantage of their last chance to see FCC for a while. The crowd of 19,229 was the club’s fourth most attended home USL game this season, as Cincinnati has drawn 20,000-plus fans three times and more than 19,000 fans five times.