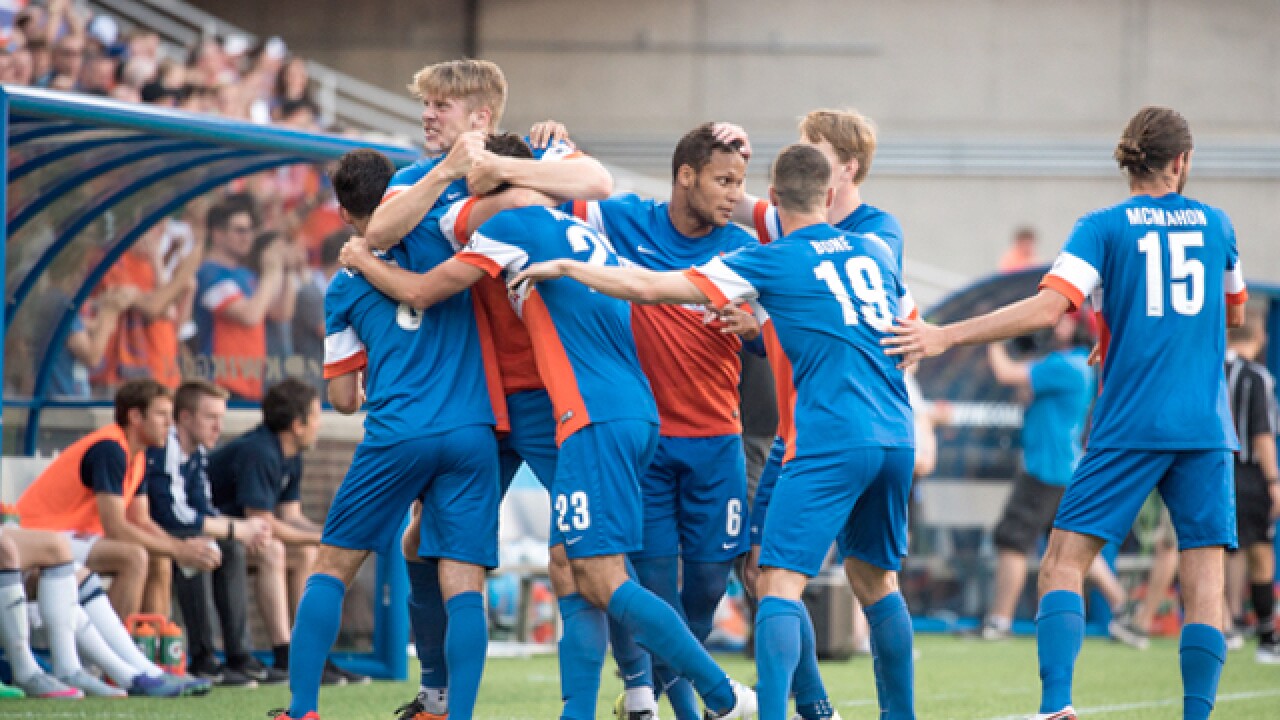 Phil Didion | WCPO file
<p>FC Cincinnati celebrates Andrew Wiedeman's goal during the first half of the game against Harrisburg City Islanders at Nippert Stadium on Saturday May 28, 2016. FC Cincinnati won the game with a final score of 2-0 (Phil Didion for WCPO).</p>

CINCINNATI -- A third of the way through its first season, FC Cincinnati seems to be hitting its stride.

The United Soccer League expansion club pushed its unbeaten streak to seven games Saturday with a 2-0 win over the Harrisburg City Islanders in front of a crowd of 16,097 fans at Nippert Stadium.

Forward Andrew Wiedeman put the home side up in the 19th minute on a top-shelf strike to the far post from about 20 yards out, Sean Okoli added an insurance goal on a penalty kick in the 89th minute and the defense came through for its second straight shutout in league play.

Here is a look at the Top 9 takeaways from the game:

1. Rest did Wiedeman a lot of good

Wiedeman said earlier this week that his body never felt worse after a hard-fought 1-0 win over Pittsburgh on May 14. He was fortunate to receive a two-week break from action, sitting as an unused substitute in the U.S. Open Cup game May 18 and earning an unexpected weekend off when Charlotte had to postpone May 21.

The forward returned to play for the first time in two weeks feeling refreshed and it showed in his 20-yard top-shelf strike to the far post to put FCC up 1-0 in the 19th minute. It was his third goal of the season.

“Corben (Bone) found the ball in some space and played me the ball, and I saw Pat (McMahon) make a run out of the corner of my eye, so I let it go,” Wiedeman said. “Maybe it was a little too tight because it was pretty close, but Pat was able to get a good ball back to me and I took a touch. (Coach John Harkes) told me before the game I was due for one and I was hitting well so I was going to get one, and I did score, so I told him he needs to tell me that every game.”

Wiedeman had another good opportunity in the 48th minute when Islanders goalkeeper deflected his close-range shot and he just missed the rebound, which went into the side netting.

2. Playing to its strengths

Looking back at the first match against Harrisburg three weeks ago, a 1-1 draw, Harkes said his team was limited in its possession game because of the tight field.

Cincinnati, which used a 4-4-2 formation that game, made sure to utilize the spacing at Nippert on Saturday and turned to a 4-2-3-1 for the first time this season. That enabled FCC to stretch the field a little more and get back to what it does best in playing a strong possession game.

It got a little more difficult in the second half when Harrisburg went down a man and packed eight players in the box on defense, but overall Harkes was pleased with how his team played.

“I thought some guys grinded out some parts of the play there,” Harkes said. “Spacing was a little bit off at times, and we were getting a little bit too deep, but when they got their player sent off, it can give you a false sense of security at times because they drop back in a block of eight and it's very difficult to break down.”

The pre-game tifo in “The Bailey” section was a drawing of goalie Mitch Hildebrandt’s head with him saying, “No,” as a play on the social media hashtag, #MitchSaysNo, that is used – and chanted in the stands – whenever he makes a big save.

Hildebrandt had some great stops, including a diving save on a well-placed free kick from just outside the box late in the first half. He had four saves by halftime, none of them routine, and earned his second clean sheet of the season with five total saves.

“He's always capable of making those saves,” Harkes said. “He's done a good job, and it's good for him to get a clean sheet too and build off it. Everybody sacrificed today and dug in, which I was really happy about.”

4. Shutting down Wheeler was key

Harrisburg forward Aaron Wheeler came into the match on a hot streak, having a hand in four of his team’s five goals (with three goals and an assist) over the previous two games. However, FCC’s defense marked him well and didn’t allow him a shot in the 52 minutes he played.

Wheeler was sent off with a red card seven minutes into the second half after elbowing Harrison Delbridge in the face as the two challenged for a ball in the air. Blood poured down Delbridge’s cheek and play was delayed several minutes while trainers patched him up. It was Wheeler’s fourth foul of the game.

FC Cincinnati still hasn’t been able to put games away after taking early 1-0 leads and having to fight to hold on. Fortunately, the defense has come through with clean sheets in two straight league games.

“That's big-time for us,” Wiedeman said. “We're pretty confident in the talent we have as a team, the ability we have going forward. Sometimes we need a little more killer instinct. We go 1-up on these teams and then we let them hang around. I think we need to take the dagger out and go up 2-nil earlier and put the game away, but the shutouts have been key.”

Okoli hasn’t scored a goal in the run of play since doing so in the first two matches, but said he’s not worried about it.

He scored his third goal of the season on a penalty kick in a May 4 win at Orlando City B and then broke a three-game drought with another PK on Saturday, shortly after missing an open opportunity that he sent right at Harrisburg goalie Keasel Broome.

When it came time to decide who was going to take the penalty kick, he said he had no hesitation.
“As a striker you have to have a short memory,” Okoli said. “I thought I did well to take the touch (on the missed opportunity), but the finish wasn't there. I knew I was going to get another chance, so I just had to go out there and get the next one. I'm glad I did.”

He’s hit the crossbar and post a few times in recent games, but the forward said he just needs to keep working hard and trust the process and the goals will come.

Harkes said the rest his team has received the last two weeks has helped save players’ legs, but he is pleased with the fitness level so far.

FC Cincinnati didn’t use all of its permitted five subs Saturday, as four players came off the bench for less than 15 minutes of playing time. Derek Luke played just five minutes, and Evan Lee three.

Harkes said the team does a lot of conditioning with the ball in training.

FCC is 5-0-2 in its last seven games, including a 2-1 win over the Indy Eleven NPSL team in the U.S. Open Cup on May 18, but remains hungry to compete for a league title.

The first-year club has been among the top four or five teams in the Eastern Conference table every week and was sitting at second Saturday night.

“Early on, you're never content, you are never sitting back and saying you're happy with what's going on, but at times, we really are,” Harkes said. “We've still got to push it, and my players know that.”

FC Cincinnati steps back into U.S. Open Cup play Wednesday on the road, as it faces the North American Soccer League’s Tampa Bay Rowdies before returning to Nippert Stadium to host Richmond on June 4.

9. Crowd down but solid

FC Cincinnati’s attendance figure Saturday was a big drop from the Pittsburgh game when it drew a record crowd of 23,375 fans, but it was still impressive to top 15,000 on a holiday week with Taste of Cincinnati to compete with.

The club continues to blow the rest of the league out of the water.