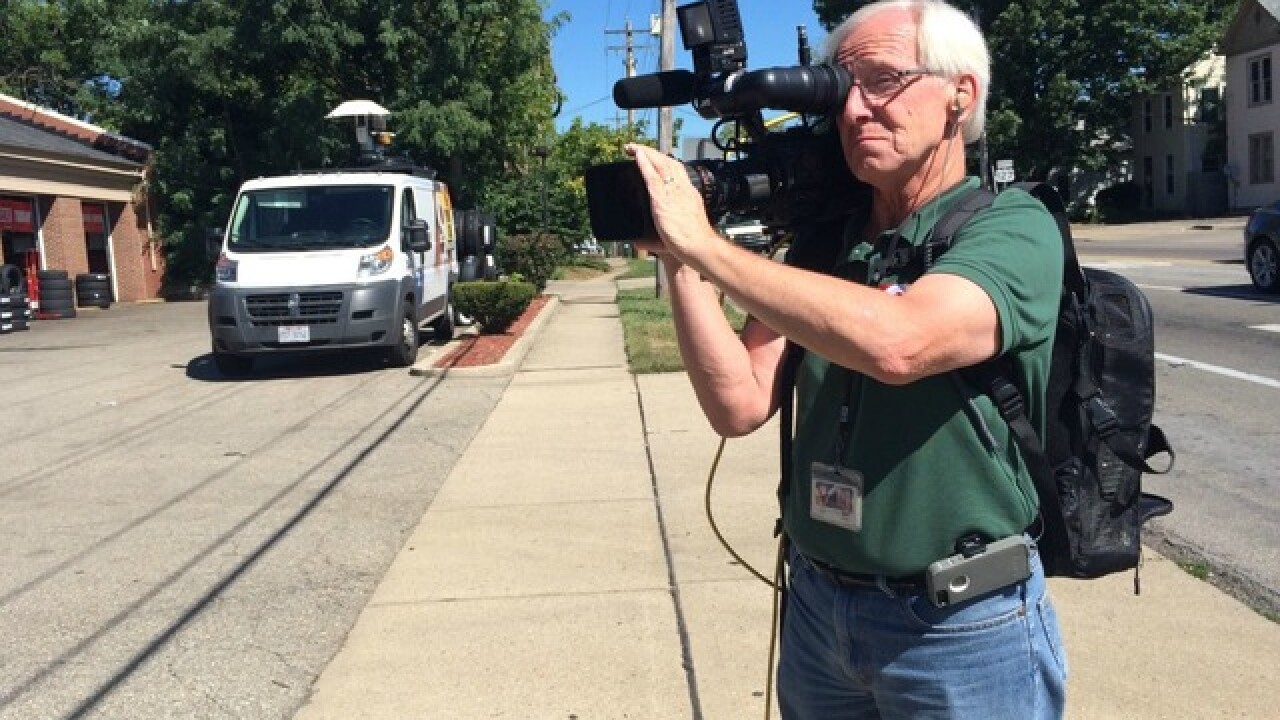 WCPO
<p>9 On Your Side photographer Ron Fischer on the job in this undated photo. Fischer celebrated 50 years at WCPO 9 On Your Side on March 27, 2016.</p> 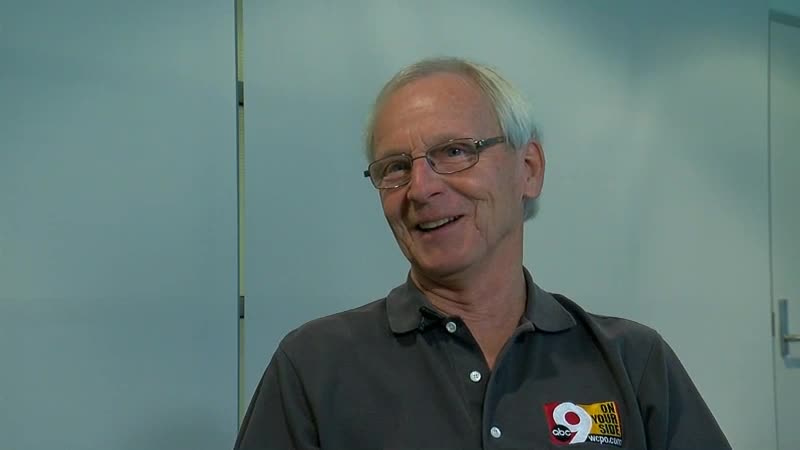 Editor's note: This story was originally published in March 2016 to celebrate Ron Fischer's 50th anniversary at WCPO. Now, we're bringing it back to celebrate his career as he prepares to retire at the end of 2016.

CINCINNATI  — Ron Fischer has been Greater Cincinnati's eyes and ears for the region's most memorable news stories over the past 50 years as a photographer for 9 On Your Side.

He remembers going to the downtown convention center to cover a visit from former President Lyndon B. Johnson. He has been to the scenes of more fires than he can remember. And he covered multiple plane crashes before a new navigation system made it easier for aircraft to land safely at the Cincinnati/Northern Kentucky International Airport.

The first time he ever rode in a chopper, it was WCPO's old, two-seat bubble helicopter. There was no way to mount Fischer's video equipment, so he had to hold it steady to shoot. He and the pilot removed the door next to the passenger seat and then took flight on what Fischer described as a "cold, wintry night."

The pilot flew him right over a fire at a produce warehouse on Cincinnati's riverfront.

"The pilot turned the thing, and I was looking straight down into the roof — it was a big ball of fire," Fischer said. "I wasn't scared at all. I just take things in stride."

Colleagues say that attitude has been the key to Fischer's long, successful career.

"I've worked with Ronnie for 14 years, and he has a positive attitude every day," said Jeff Brogan, 9 On Your Side's vice president and general manager. "What Ronnie has done is unprecedented — you just don't see this in our business, much less a photographer."

That's not only because of the emotional toll the job can take. It's also because broadcast photographers like Fischer must carry large cameras and tripods in all kinds of weather while driving around town to get the story first and meet deadlines daily — often several times a day.

'I Can't Even Imagine What He's Seen'

"You have to have a certain constitution to be able to do that," said Caryl Hefley, a former news photographer for 9 On Your Side who now is a commercial production producer at the station. "And to do it for 50 years? I can't even imagine what he's seen."

To commemorate Fischer's 50 years with WCPO, here are nine of the big stories that Fischer has been involved in covering. (It's not 10 On Your Side, after all.)

• The Beverly Hills Supper Club fire. Fischer was there May 29, 1977, the day after fire tore through the Southgate club. A total of 165 died in the blaze, and more than 200 others were hurt. Fischer shot the eerie images of the makeshift morgue that are part of the video clip below.

• Kings Island opens. Young people might not realize there was a time before Kings Island. The amusement park opened April 29, 1972, and Fischer was there for the big day, along with Fred Flintstone.

• In more recent news, Fischer was an important part of the coverage of Officer Sonny Kim's funeral services. Kim was the Cincinnati Police Officer who was shot to death in Madisonville on June 19, 2015. The region mourned him as a hero. Students at his Japanese Karate-Do dojo in Symmes Township knew him as "sensei." Fischer shot video at his dojo where students honored Kim.

• Fischer also was on the scene for the recent story of the West End woman who reported that her newborn baby was in her car when it was stolen. Police later discovered that the baby was never in the car, and the mom ended up in jail on several charges.

• Fischer has covered countless natural disasters, too. He remembers flying in the station's helicopter with legendary anchorman Al Schottelkotte in 1974 after tornadoes ripped through the Tri-State. He drove to Xenia with a reporter later that evening.

"That was an eerie feeling. You couldn't see anything," he said. "We're driving down the roads. Lightning was lighting up all over the place."

His work is included in the clip below.

• Another memorable assignment was the time Fischer went with Schottelkotte to a bar to recover stolen artwork. "That was freaky," Fischer said. "You walk into a neighborhood bar, and you look over and here's these paintings that came from the art museum on the floor."

• Did this past winter bring back memories of the year that the Ohio River froze enough for people to walk across it? Or did you at least hear about it from someone who lived here at the time? Fischer was there and shot footage for Channel 9.

• He has played an important part in Cincinnati sports history, too. He shot film and video of the late Cincinnati Reds owner Marge Schott numerous times. This retrospective includes some of Fischer's work.

• He also traveled in the 1970s and in 1990 to cover the Cincinnati Reds in two World Series appearances. For the earlier series, he had to shoot film, then get on a helicopter to deliver it to another airport where it was shipped back to the station — after every game. Because of Major League Baseball rules, we can't show you the video that Fischer shot of those games. Instead, here's footage of the parade Downtown to welcome the 1976 Reds home.

Fischer wasn't part of covering the parade, he said. But here at WCPO 9 On Your Side, we consider his work over the past 50 years worthy of a celebration almost that big.