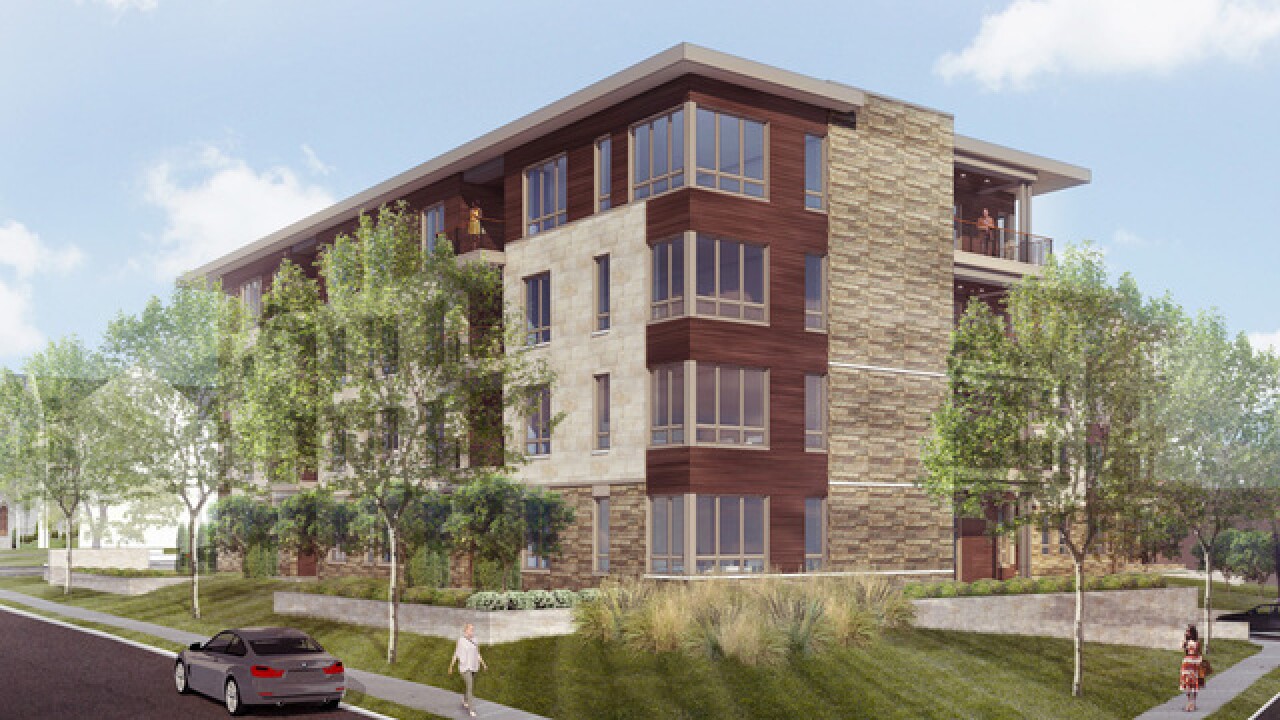 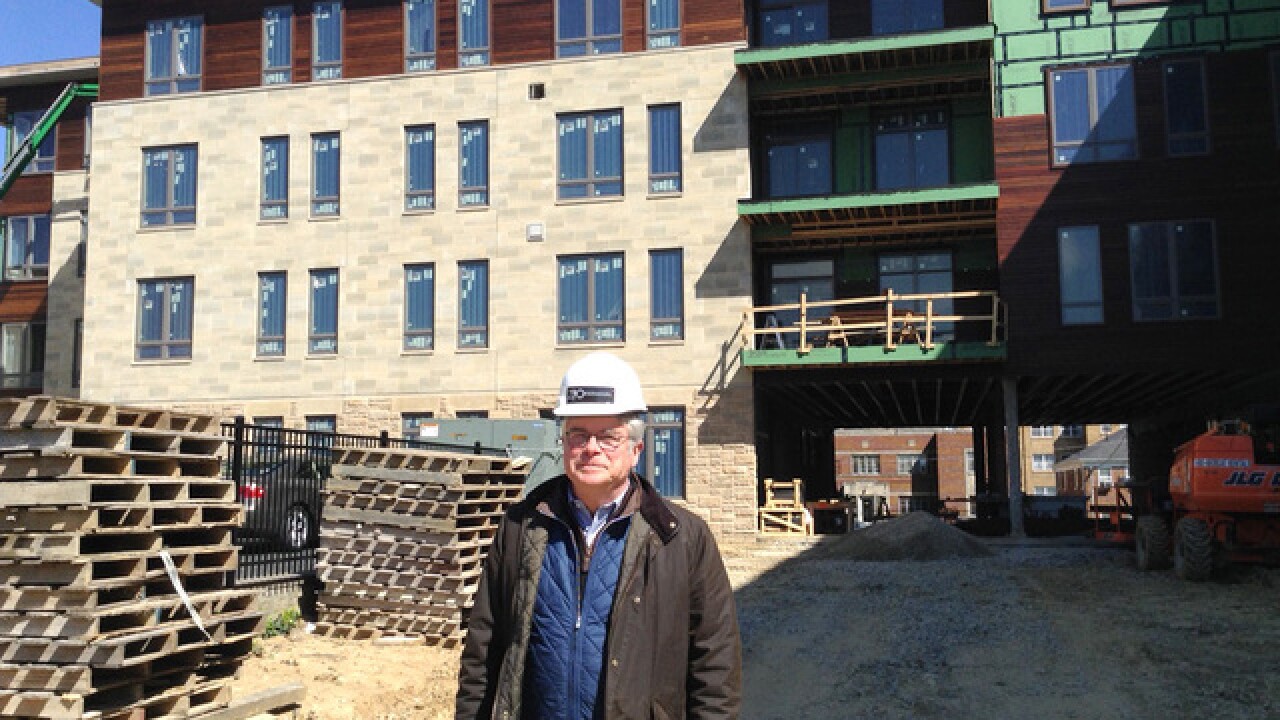 CINCINNATI — It’s been seven years since Hyde Park residents got a new option for upscale living. Their wait is nearly over.

The first buyers to call 2770 Observatory home are expected to move into the new condominium project by August. The $28 million development is being built at the corner of Observatory and Shaw avenues in Hyde Park, just east of Knox Presbyterian Church.

More important to its developers, 2770 Observatory is just a block from Hyde Park Square. The proximity to the square’s amenities — its shopping, restaurants and Old World ambiance — was critical to attracting the buyers the building was designed to serve.

The package seems to be working. Rick Greiwe, principal of Greiwe Development Group, said Tuesday that 17 of the building’s 30 units already are sold. To help boost that number, Greiwe, 2770’s developer with downtown-based North American Properties, invited key local real-estate representatives to see the property up close. WCPO.com was given exclusive access as part of the tour.

Greiwe and North American together have carved out a niche in the market for upscale housing in walkable, urban settings. Their highest-profile project has been the four-phase construction of more than 100 condominiums around Mariemont’s Village Square.

The first building, Jordan Park, was sold out at its 2008 opening. The final piece of the project, called Livingood Park, tops out Wednesday with a 10 a.m. ceremony that will include Mariemont Mayor Dan Policastro, Rev. Todd Keys of Mariemont Village Church and executives from Greiwe Development and North American. Half of its 18 units already are sold, a release from the developers stated.

Real-estate experts agree that 2770 is coming on the market at a good time. The condo market in Cincinnati’s eastern neighborhoods — Hyde Park, Mount Lookout and Oakley in particular — has markedly strengthened in the past six to eight months after several years of slow sales. The slowdown, not surprisingly, came with the Great Recession in 2008.

He said his office set a monthly sales record by dollar volume in March. The previous high was in 2013, he said.

Aside from a general recovery in the housing market, Hummel said developments like 2770 Observatory benefit from changing demographics and a renewed interest in urban living. “I think there's a huge demand for something like this,” he said.

“In the Hyde Park market, with larger, older homes, people are wanting to downsize,” he said, “but they don't want to go into an apartment. They're looking for condo living in a building like (2770). They don't want to leave Hyde Park, and this will be a perfect solution for that.

He said some of the buyers in the new building are already Hyde Park residents who no longer wanted the burden of maintaining a large home.

For buyers at 2770 Observatory, downsizing will be relative. The 30 units range in size from just under 2,000 square feet to more than 4,600 square feet — easily as much as many single-family houses. The condominiums carry price tags between $700,000 and $2 million. Residents will also be on the hook for up to $11,000 in annual condominium fees.

For that, Greiwe promises luxury living. Ceilings are 10 feet throughout, except for the ground floor, where they’re 11 feet to match the porte-cochére, or carriage porch, at the end of the driveway that runs from Observatory Avenue to Linshaw Court. As befits a walking neighborhood, residents’ cars will be invisible, parked in a 77-car garage under the living units; access to it is from Shaw Avenue.

All the units have either porches or balconies, most of them encompassing a spacious 200 square feet. The floor plans offer mostly open layouts, with kitchens set off from adjoining spaces by islands. All units have fireplaces, some of which are two-sided and act as room dividers.

The outside walls are sheathed either in stone — mostly large pieces of limestone that echo the walls of the neighboring Knox church — or ipe (pronounced ee-pay), a durable and insect resistant, though expensive, tropical wood indigenous to South America. Windows are large but not floor-to-ceiling to allow for design touches like baseboards and crown molding. The windows on the Observatory side are extra-thick to keep out road noise.

A key selling point for 2770 is design flexibility. Greiwe Development has a bit of an unfair advantage there: Rick Greiwe’s brother Dick runs the family’s 135-year-old business, Greiwe Interiors Inc. They’ve created a variety of styles to customize the units, from traditional to cutting-edge.

While some earlier residential buildings near Hyde Park Square have drawn criticism for being disproportionately large for their surroundings, Greiwe said there had been basically no complaints about 2770 Observatory. The design, done by GBBN Architects, has a deep, front-lawn-like setback. Greiwe said that, especially with the large setback, the site’s zoning would have permitted a six-floor building. At four floors, the building is about as high as its neighbor Knox.

Hummel said the strong buyer interest at 2770 is likely to spur more so-called infill developments in or near the neighborhood, although he didn’t know of any yet in the works. Before 2770, the last two such projects in the vicinity were Michigan Terrace in 2007 and 2801 Erie Avenue in 2009. Both have been full since their openings.

With their Hyde Park and Mariemont projects in their final legs, Greiwe and North American hope to turn next to the city’s quintessential urban neighborhood, Downtown. They’re key partners in a plan to build more than 60 luxury condos in two towers, one each on the northwest and southwest corners of Eighth and Main streets. That project, which would be between the streetcar line’s northbound and southbound tracks, has generated vocal opposition because it would require the demolition of a six-story, 140-year-old structure built as a warehouse.

The warehouse building is now vacant except for a Donato’s restaurant in the ground floor. In late March, Cincinnati’s Historic Conservation Board voted to allow the demolition.