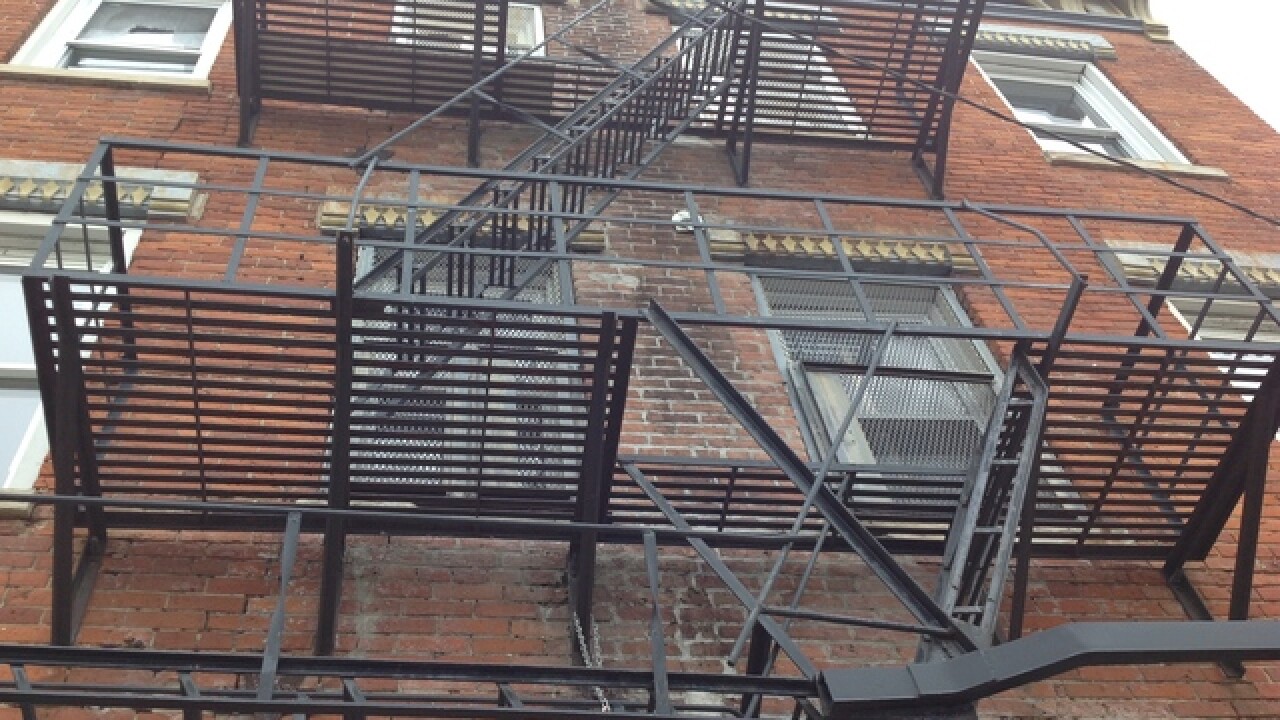 Lucy May | WCPO
<p>The fire escape on this building at 100 E. McMicken Ave. had been a serious concern for Cincinnati building inspectors. The building is part of 2414 Morgan Development's portfolio. Photo taken April 27, 2016.</p> 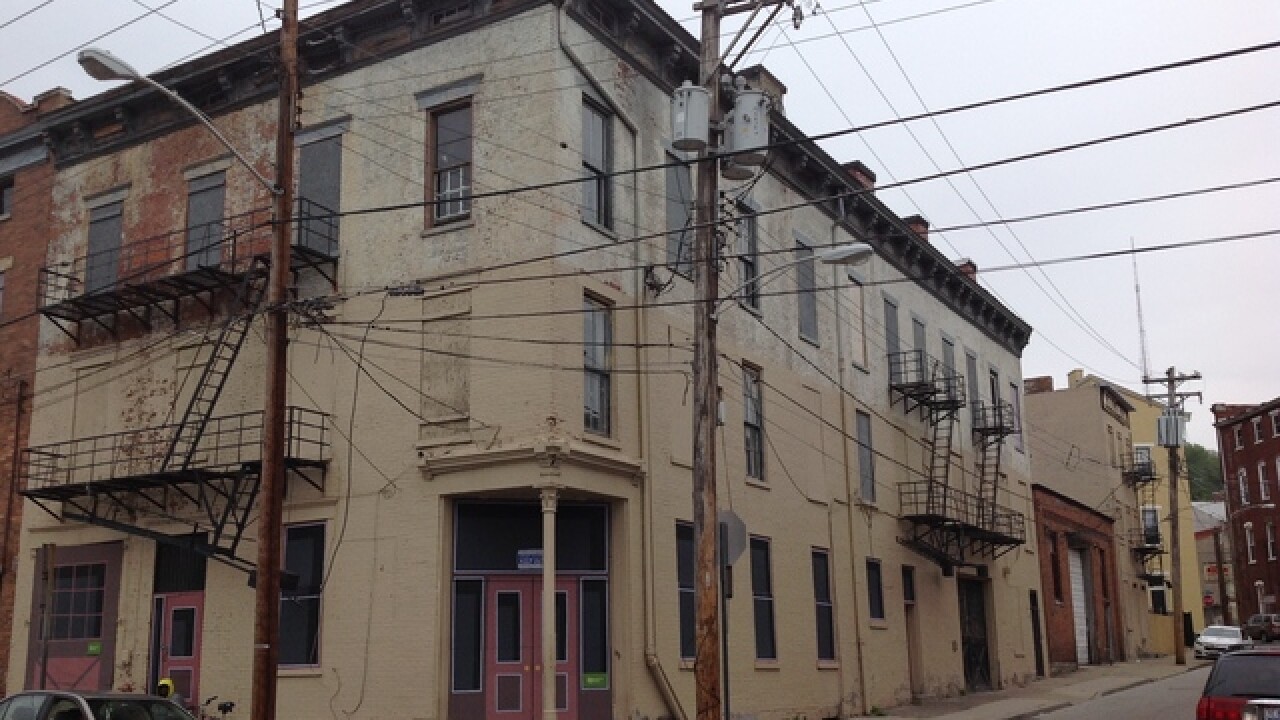 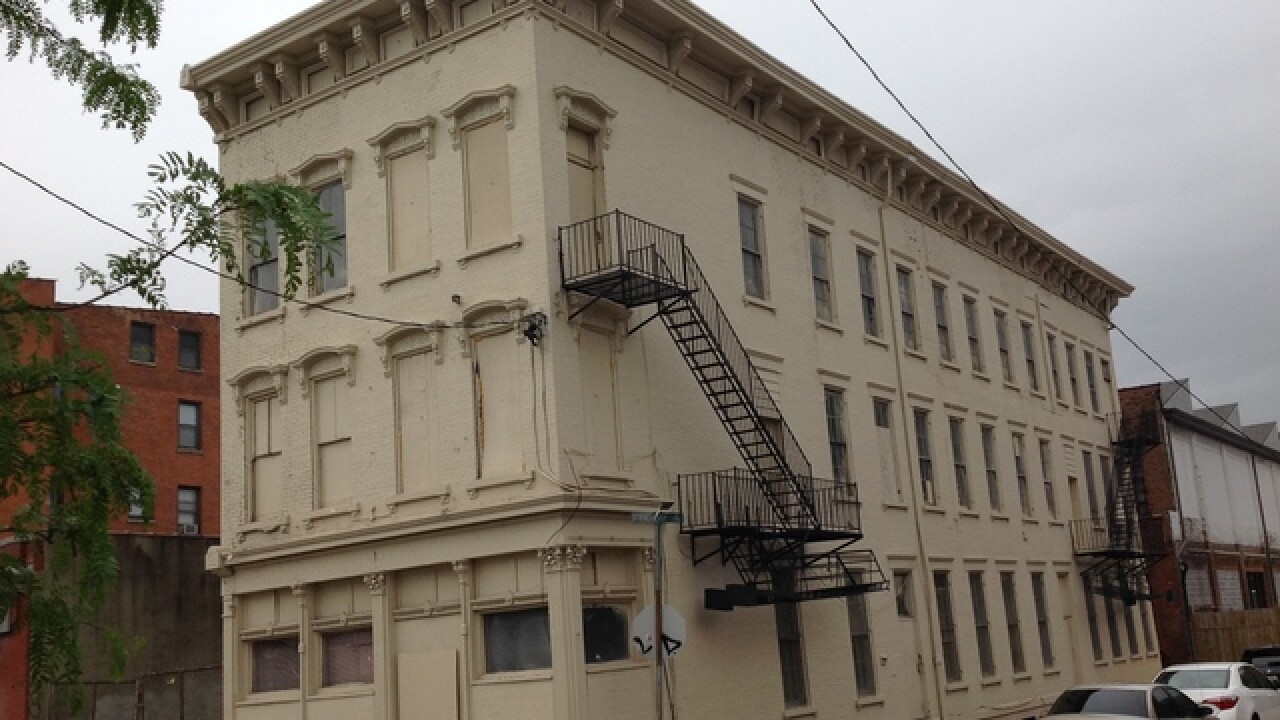 CINCINNATI — An out-of-town developer has made enough repairs to retain control of 10 historic properties in Over-the-Rhine that Cincinnati building inspectors once considered potential death traps for first responders.

An eleventh building in Avondale remains in violation of city building codes, but Washington, D.C.-based 2414 Morgan Development, LLC, is seeking to sell that property.

Hamilton County Common Pleas Court Judge Jerome Metz in December declared seven of the buildings in Over-the-Rhine and the one in Avondale "public nuisances," which paved the way for the city to seize control of the properties if the owner didn't make extensive improvements by March 15.

RELATED: Judge to developer: Fix buildings or else

But 2414 Morgan Development made enough repairs to its Over-the-Rhine properties that appointing a receiver "is not on the table" for those buildings, city attorney Jessica Powell said in an email to WCPO.

"If issues arose at any of the properties in the future and weren't timely brought into compliance," she wrote, "we would consider seeking a receiver."

George Musekamp, a lawyer with Thomson Hine LLP who is representing 2414 Morgan Development, said in an email that his client "remains dedicated to revitalizing its OTR properties."

Metz's order in December followed a November hearing where city officials asked the court to take action on the 11 buildings owned by 2414 Morgan Development.

Ten of the structures are located north of Liberty Street in the heart of Over-the-Rhine, and several are near the Cincinnati Streetcar route.

WCPO first reported on the deterioration of the group of vacant buildings in May 2014. City officials argued that the rotting buildings contribute to neighborhood blight, pose a hazard to the public and could be death traps for firefighters.

The remaining eight properties were the focus of Metz's order.

They are located at:

Under the terms of Metz's December court order, 2414 Morgan Development had until March 15 to make repairs that the city requires to issue so-called "Vacant Building Maintenance Licenses." The city's vacant building maintenance licenses ordinance requires the owners of vacant properties to make sure their buildings are barricaded, so that trespassers can't enter them, and stabilized so they are safe for first responders and so pieces of the structures don't fall into the street or onto people below.

'I'm Going to Make a Difference'

The deal was that if the developer met that deadline and building inspectors agreed that the structures met the city's standards, the properties would no longer be declared public nuisances.

But if the buildings didn't meet those standards, Metz could immediately appoint a receiver — a person or organization to stabilize the properties and bring them up to the city's standards.

The owner of the properties has been fighting to maintain control.

Executives with 2414 Morgan Development said in November that the properties were works in progress that could meet the city's building code requirements with fewer than 45 days of work.

The city is pursuing other claims against 2414 Morgan Development, too. The city is seeking more than $160,000 in fines and fees from the company, city attorney Jacklyn Gonzales Martin told WCPO in an email.

That total would cover the vacant building maintenance license fees, civil fines and abatement costs that the city says the company owes.

Musekamp said 2414 Morgan Development is "attempting to work with the city to resolve the outstanding fines and fees."

Both sides are scheduled to report back to Metz on May 19. A trial on the fines and fees is scheduled for October.