18 NKY football teams have won state titles since 2004. These are the top 9 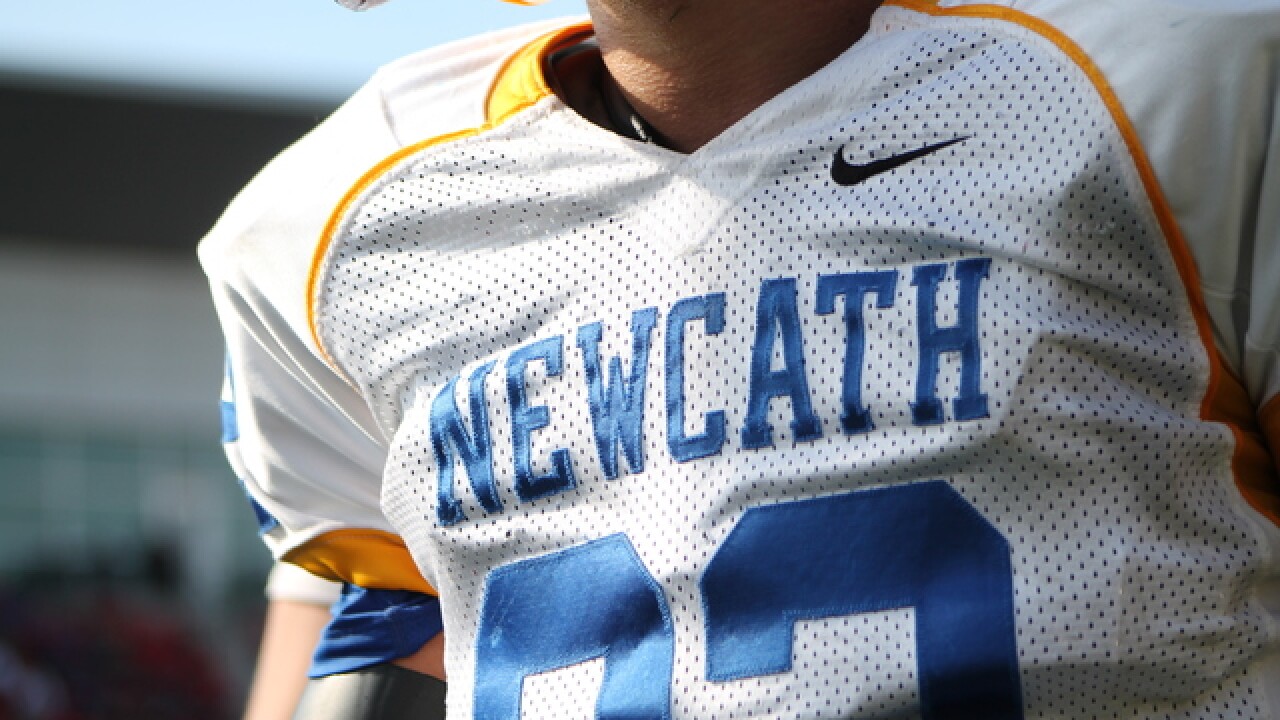 Copyright 2013 Scripps Media, Inc. All rights reserved. This material may not be published, broadcast, rewritten, or redistributed.
elliotstephens69 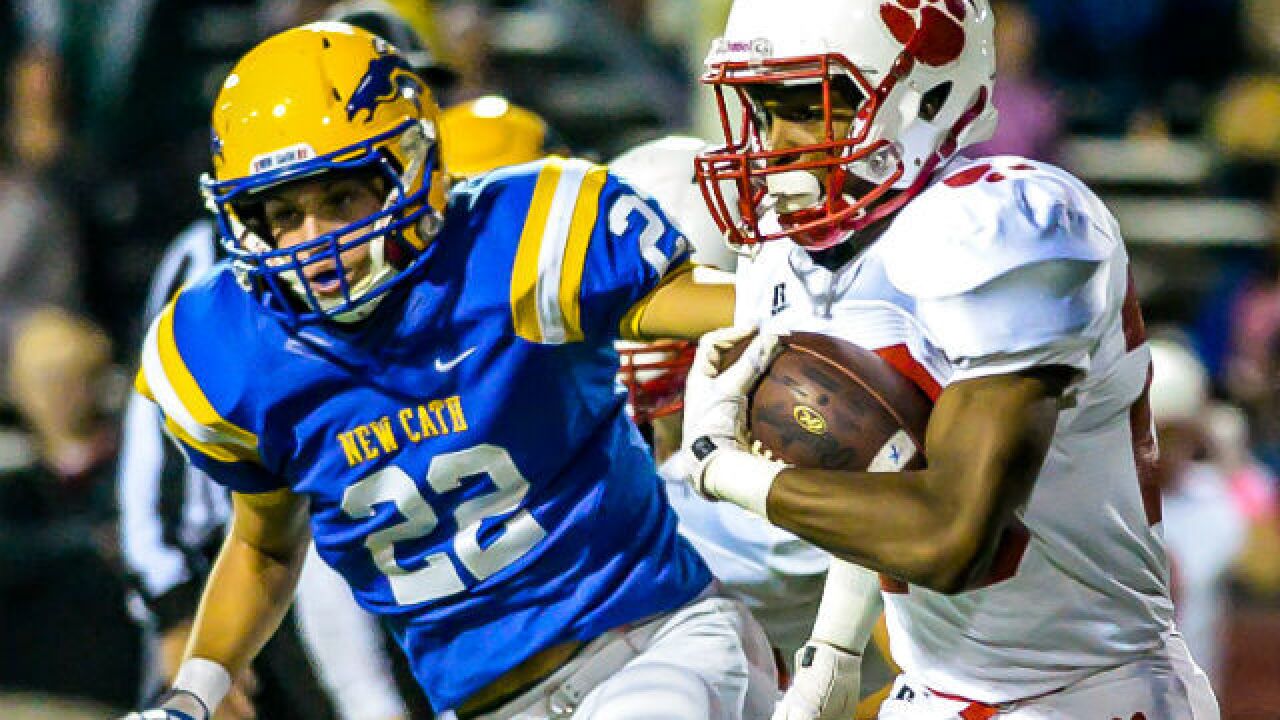 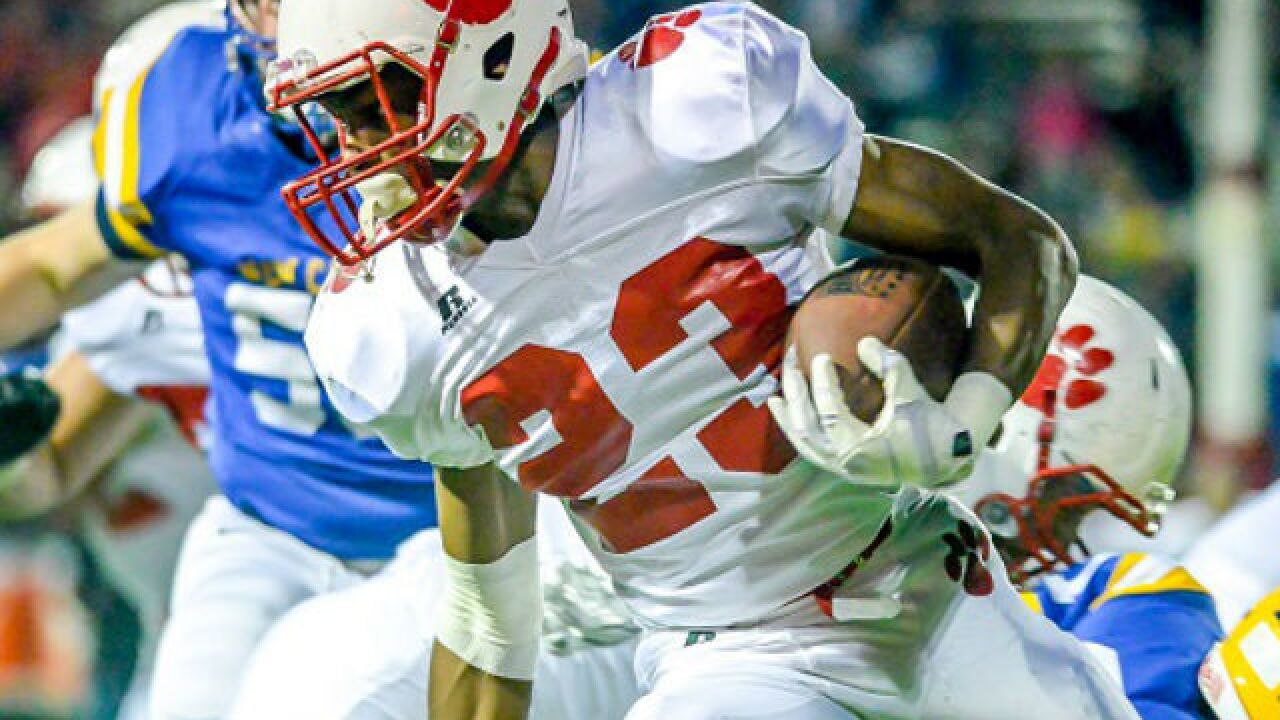 Northern Kentucky high school football programs have brought 18 state titles back to the area since 2004, including eight by Highlands.

Highlands won eight state titles between 2004 and 2014, including six in a row from 2007 to 2012 and any one of them could make a case as the best area state champion since 2002. But the unbeaten Bluebirds in 2011 were led by Kentucky Mr. Football and University of Kentucky-bound Patrick Towles.

Towles threw for 3,820 yards and 42 touchdowns in 2011 as Highlands won its 21st state championship overall and its fourth in a row.

The Birds beat 13 of 15 foes by more than two scores and left The Pit at Cincinnati Elder with a 34-29 win over the Panthers for what is still the only win for Highlands in now eight matchups with the Panthers. The 34 points against Elder was the Birds' lowest output of the season.

The Birds outscored opponents 849-191 overall that year and recorded their 13th unbeaten season.
Highlands ended the 2011 season with a 42-14 rout of Franklin-Simpson in the Class 4A state final at Houchens/LT Smith Stadium at Western Kentucky University.

Towles finished his high school career with 7,429 yards and 73 touchdowns, and just one loss.

A sophomore Towles took over as starting quarterback for Highlands midway through 2009 and threw for 1,138 yards and 10 touchdowns as the Bluebirds finished 15-0, including a 12-7 win over Ohio power Cincinnati St. Xavier on Sept. 25, 2009, at Highlands.

The Bluebirds beat John Hardin 35-7 in the Class 5A state final on Dec. 4, 2009, at Houchens/LT Smith Stadium. The state final win was the Birds' 28th straight victory and improved the program to 44-1 over the previous three seasons. It was the 19th state title for Highlands, tying Louisville Trinity for the most in Kentucky history at that point.

It was the fifth title of the decade for Highlands and third straight.

Highlands outscored foes 597-166 in 2009 behind Towles and a balanced offense that featured Austin Collinsworth and his 1,502 yards on 172 carries and 23 touchdowns. Collinsworth rushed for 176 yards on 25 carries and scored three times as in the 2009 state final. The Birds won their games by an average of 28.7 points and the only single-digit win was the win over St. X.

At the time, then-Highlands coach Dale Mueller called his 2007 Bluebirds the greatest of them all.
"This group was just perfect," Mueller told The Kentucky Post in 2007 after winning his sixth state championship at the school. "There's not one player on this team that was an underachiever. Everyone was an overachiever. You just couldn't have a better group. Of course, next year we're hoping that will happen again."

The Class 5A state title in 2007 was the first for the Birds since 2004 and started the run of six straight. Highlands beat Bowling Green 28-7 at Papa John's Cardinal Stadium to win its then-state-record 17th state title and complete its 11th undefeated season.

The Bluebirds won most of their games by more than 21 points and outscored foes 610-153 on the ground behind a dominating running attack. Josh Conner led the Birds with 1,719 yards on 216 carries with 28 touchdowns, quarterback Clay Cecil added 915 yards on 98 carries with 12 touchdowns and Zach Hurtt ran for 822 yards on 90 carries and 15 touchdowns as Highlands rolled up 4,053 yards on the ground.

Covington Catholic had not won a state title in football since 1997, when John Rodenberg took over for longtime Colonels coach Lynn Ray in 2005. Just one year later, the Colonels won the sixth championship in program history.

"We came in with a little bit different philosophy and they bought into it right away," Rodenberg told The Post in 2006. "I told them the sooner they bought in the sooner we'd win. So let's take our hats off to these football players because they're the ones who got it done."

The new philosophy was a spread offense that the 2006 Colonels ran quite well. Quarterback Josh Bleser threw for 2,445 yards and 28 touchdowns. Tight end Peter Sutton caught 50 passes for 835 yards and 12 touchdowns.

Brandon Brown ran for 1,074 yards and 15 TDs while Brent Buckley added 1,011 yards and 12 scores.
The Colonels lost three of their first seven in 2006, but those losses came at the hands of Ohio powers Cincinnati Elder, Cincinnati St. Xavier and Columbus Bishop Watterson.

CovCath won its final eight games, including a 27-8 win over Bowling Green on Dec. 1, 2006, at Papa John's Cardinal Stadium in Louisville.

Beechwood won seven Class A state titles during the 1990s, but the Tigers were not able to add a title to the trophy case in the 2000s until 2004. That's when Mike Yeagle's Tigers ended a four-year title drought and completed a 14-1 record with a 23-7 win over Danville in the Class A final on Dec. 3, 2004, at Papa John's Cardinal Stadium.

"It's a great feeling and something to be proud of," Yeagle told The Post in 2004. "Like I told our kids before the game, ‘No matter what happens to you the rest of your life, if you become a state champion, they can't take that ring away from you forever.'

Beechwood had been state runner-up the previous two years.

Senior running back Dustin Menetrey rushed for 2,384 yards in 15 games that season for a 158.9 average per game. He was nearly 45 percent of the team's offense.

Then-NewCath coach Eddie Eviston guided the Thoroughbreds to a state title in his first season as head coach following the retirement of longtime Breds coach Bob Schneider, becoming the first rookie head football coach to win a state title in Kentucky since Mayfield's Paul Leahy in 1993.

NewCath beat Owensboro Catholic 42-0 on Dec. 3, 2010, at L.T. Smith Stadium at WKU, scoring each time it had the ball until the third quarter. Kelly and Hightchew each scored a pair of touchdowns.

These Tigers finally ended another longer Beechwood state-title drought with 21-14 win over Hazard last Dec. 2 in the Class A state final at WKU. It was the program's 12th state title and its first since 2008.

"So many Beechwood teams in the past have won state and have had great seasons," senior running back/defensive back Aiden Justice said last year. "We just try to live up to that and honor them."

The Tigers honored their past in 2016 by outscoring foes 603-180 with four shutouts, including two in the postseason.

Justice carried 167 times for 1,107 yards and 18 touchdowns in 2016, and caught a team-high 32 passes for 604 yards and seven more touchdowns to lead a Beechwood offense that averaged 40.2 points per game.

Junior quarterback Brayden Burch completed 151 of 236 passes for 2,407 yards and 26 touchdowns with only six interceptions.

The Tigers' only loss in 2016 came to Class 5A juggernaut Covington Catholic.

The 2005 season was a record-breaking season for the Thoroughbreds program. Senior quarterback Sam Diehl completed a three-year varsity career with 14 team records, most notably his career total of 6,018 total passing yards and 77 touchdown passes.

"The only thing that matters is we won state," Diehl told The Post in 2005.

Diehl was the driving force that season with 2,502 yards passing and 37 touchdowns with 416 yards on the ground and nine more TDs.

Bob Schneider broke the state record for career wins with 302 that year and won his second state title in his 40th season at NewCath. Schneider won one more state title in 2006 and finished his career in 2009 with 345 wins, which still stands as the third-highest total in Kentucky high school history.

Defensive end Justin Smith led a Breds defense that allowed only 179 points in 15 games with 141 tackles.

NewCath lost only to Class 3A CovCath and Class 1A Beechwood, then really hit its stride in the playoffs and won the last five games by an average of 33.8 points per game. NewCath beat Mayfield 42-7 on Dec. 3, 2005, at Papa John's Cardinal Stadium. The 35-point victory was the third-highest margin in the then-46-year history of the Class A state championship game.

"Anybody watching us at the end had to be impressed with the way our kids played," Schneider told The Post. "It was just amazing that we could play that way throughout the playoffs."

The championship came 13 years after the late John Wysong started the program in 1998.

Senior quarterback Kyle Fuller was the most dominant weapon the Indians had on offense with 3,025 yards through the air and 38 touchdowns passes to go with 1,384 yards on 212 carries and 15 more touchdowns.

Nine other local teams won Kentucky state titles in the past 15 years.

NewCath repeated as Class 1A champs in 2006 and the Thoroughbreds' most recent state title was a 2A championship in 2012.