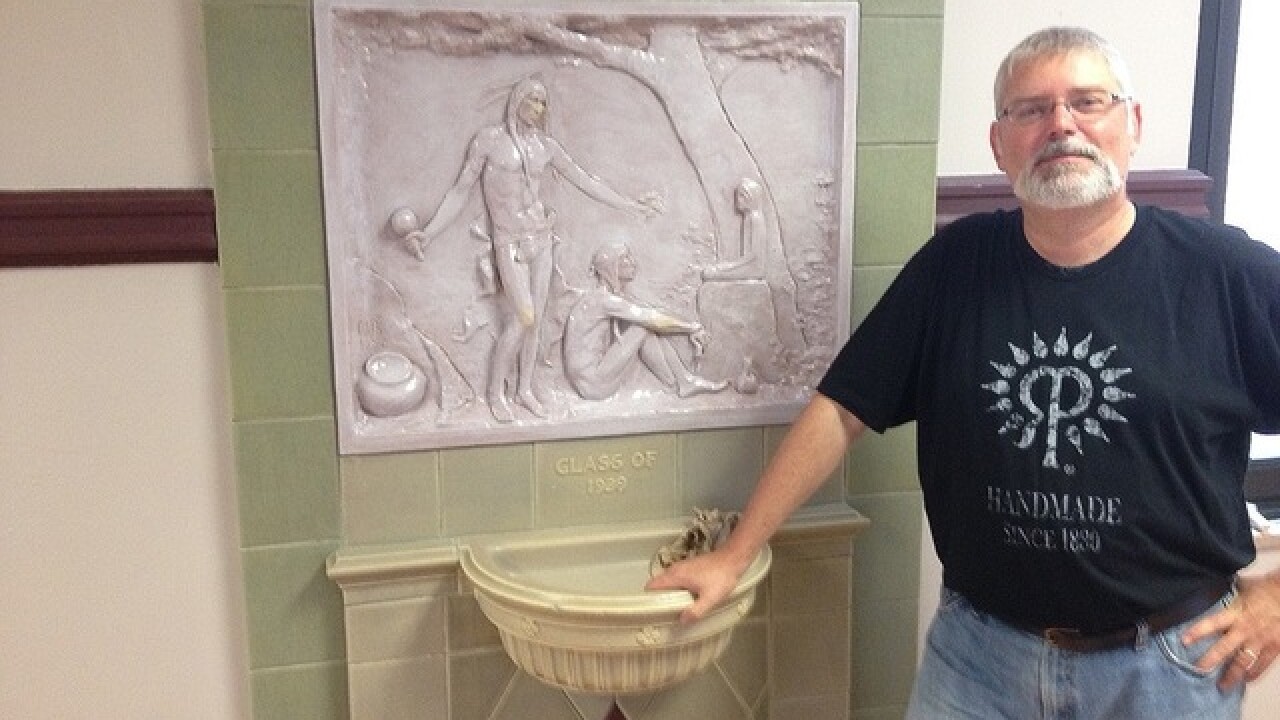 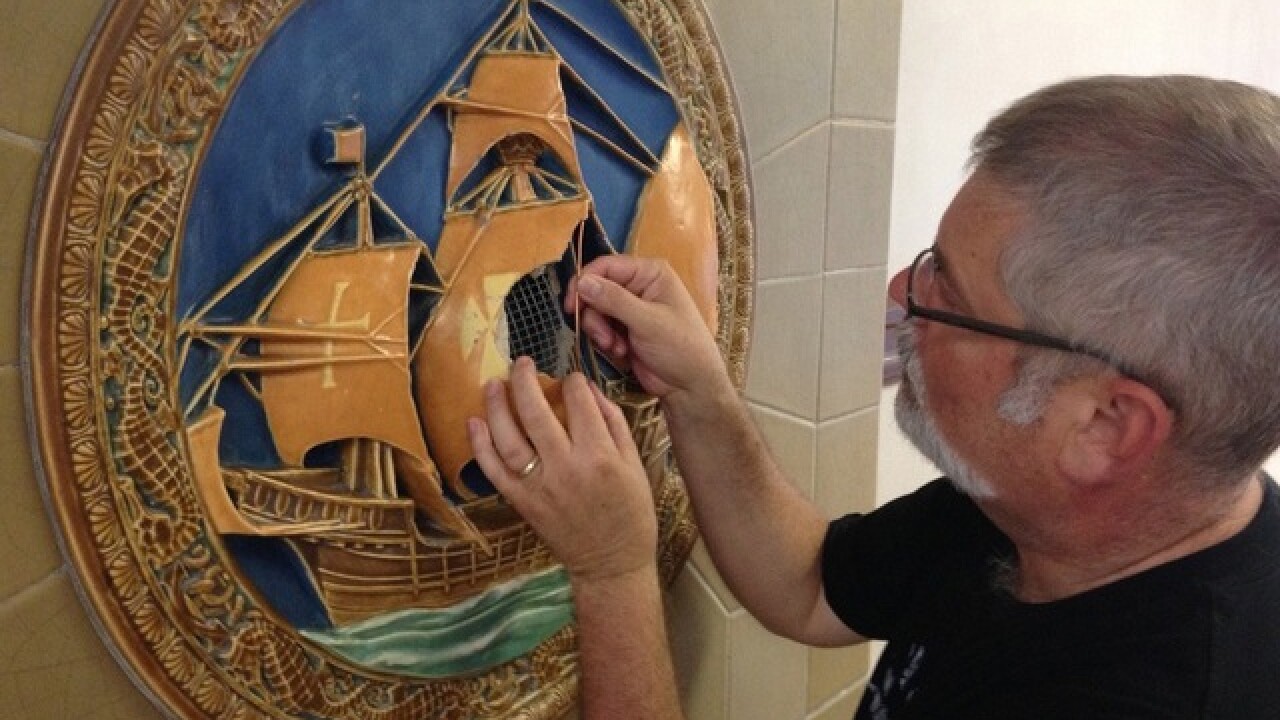 CINCINNATI — Fixing 100-year-old water fountains by the master artists of Rookwood Pottery is a one-man job that takes skill and patience.

Over three weekends this month, Westwood graphic designer and pottery restorer Ken Lay is working alone in a long hallway on the second floor of Hughes High School, repairing damage to the sail of a ship crafted by William McDonald and the nose, lips and elbow of an American Indian sculpted by Clement Barnhorn.

Those are big names in the history of Cincinnati’s venerable pottery that Maria Longworth founded here in 1880, and Lay feels the pressure to make his repairs impossible to discern.

“I might give him a little more of a hook, a little more nostril,” said Lay as he sized up his first round of repair on Barnhorn’s “Hiawatha” frieze. “If it’s not done right, they’ll look fake.”

Lay’s restoration is the third time someone has laid skilled hands on the school’s 12 Rookwood fountains. Only a few of the remaining six untouched fountains show damage, an amazing fact considering the tens of thousands of Hughes students who have used them, leaned on them, perhaps even sat on them since The Art League began bringing art into Cincinnati Public Schools in the early 1900s. Barnhorn’s “Boy and Dolphin” sculpture was the first to be installed at Hughes in 1912.

The Art League collected pennies from students and rewarded the biggest donors the honor of picking a piece of art for their school. The Hughes High class of 1939 won and went with “Hiawatha,” which Barnhorn made and signed in 1920. Its class of 1941 chose the colorful sailing ship frieze, which was signed by McDonald in 1912. The Class of 1946 sponsored the last fountain, a memorial to young Cincinnati men who fought in World War II.

In the years since being installed, the Indian lost its nose, lips and elbow, and the ship, a partially hollow, high-relief piece, got punched in, leaving a 2-inch-deep hole in its sail.

“Ken will have an engineering challenge to fix that,” said George Hibben, Rookwood’s director of stein design and development, who contracted Lay for the job.

“Other than the horrible damage (to the sail fountain), they’re in pretty good shape,” Lay said.

The group’s thinking, Bepler said, was, “We have 12 gorgeous, gorgeous Rookwood fountains at Hughes High. … Now we’re all older, in our mid-seventies, and we can’t just keep the $8,000 we collected for Hughes. … Let’s get on the ball and do something with it.

“When you think of how old the school is and kids coming into the hallways and rough-housing, not realizing that what they’re brushing up against is so valuable …’ ” Bepler said. She said when she was at Hughes, all she remembers about the fountains is drinking from them.

Lay, who earned a master’s degree in fine arts from Eastern Kentucky University and attended Tindell’s Restoration Schools and Studios near Nashville, Tennessee, normally works on pottery restoration in the basement of his Westwood home. This is his third on-site job. The others were at Two Red Roses Foundation in Palm Harbor, Florida, and Western & Southern Life Insurance Co.’s Guilford School building off Lytle Park in downtown Cincinnati.

He said he is honored to work on the Hughes fountains and feels tied to the history of Rookwood Pottery.

“I do think about the Rookwood artists — Sara Sax, Matt Daly, Clement Barnhorn, William McDonald — and how I am preserving their legacy as it moves through time.”

He gave the fountains, which have been stripped of their fixtures and no longer work, a thorough cleaning on Day 1 and began repairing and rebuilding them on Day 2, using KwikWood epoxy putty to simulate ceramic. He has about five minutes to apply the putty before it begins to get too hard to mold. Then he lets it set and dry for about an hour, sands it and repeats the process however many times are needed to get the look he wants. The final step is applying semi-gloss paint that matches perfectly so no one will know a repair had been made.

“It takes a lot of small steps,” said Lay, who estimated it would take 36-40 hours to complete the restoration of the two fountains. If there is any time left, he could tackle a third Hughes fountain.

Although today’s students might not appreciate the rare fountains, restoring them is important, Hibben said. “They are the legacy of Rookwood that occurred through love, and we’re lovingly restoring it.”

Rookwood returned to Cincinnati in 2006 after a nearly 50-year hiatus and repaired two Hughes fountains in 2009. The Over-the-Rhine company makes more than 400 different architectural tile designs and profiles, both archival — like those it made from 1902 until the Great Depression — and contemporary by current artists.

Bepler said she hopes the repaired fountains will be noticed and appreciated, but recalls how she and her classmates took them for granted.

“My fear is we will do all this preservation, and someday the school will close for good, and some idiot —I can’t think of another better word — will say, ‘We don’t need these darn things’ and tear them down. It would be such a shame.”