'Cintas Magic' couldn't save Xavier from 77-68 loss to Wisconsin 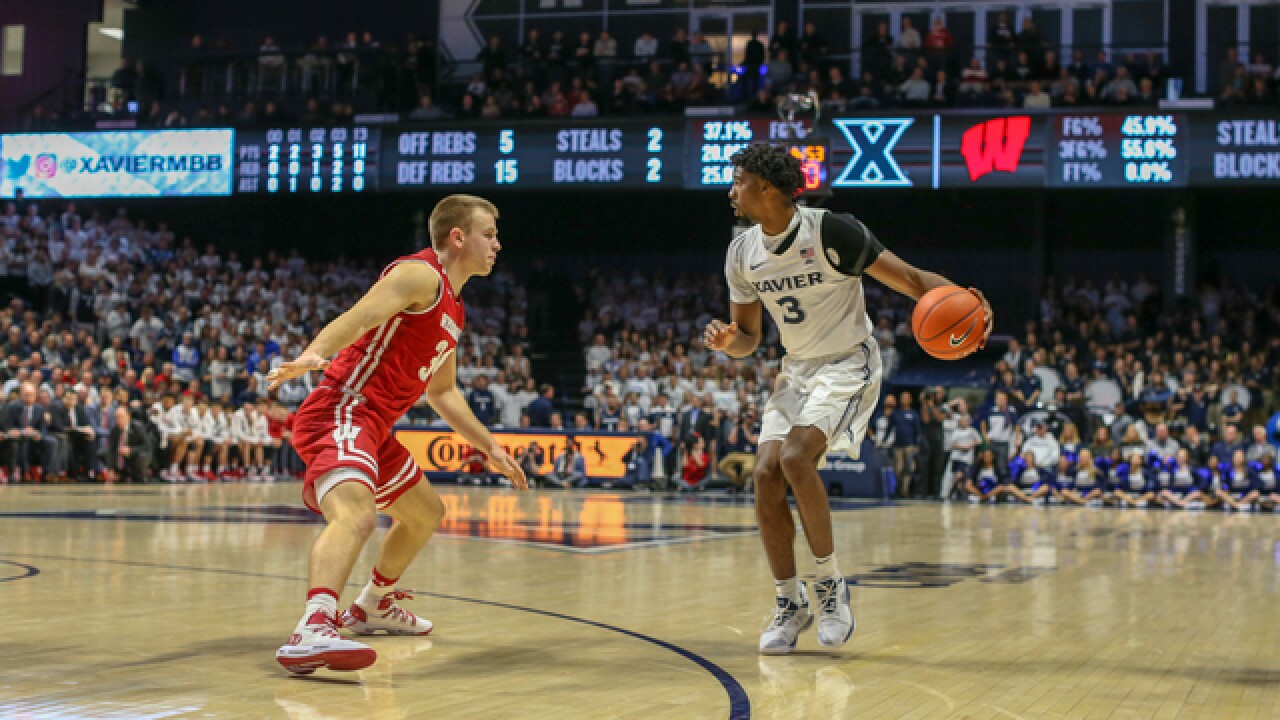 Copyright 2018 Scripps Media, Inc. All rights reserved. This material may not be published, broadcast, rewritten, or redistributed.
<p>(Photo by Xavier University/Bob Stevens)</p>

CINCINNATI -- The Xavier Musketeers don't often take beatings like this at Cintas Center, certainly not in non-conference play in one of the toughest venues in all of college basketball.

But this is a year for growth, not grandeur in Evanston.

Travis Steele's first season as Musketeers' head coach will be defined by how his team performs in February, not by how it's playing before Thanksgiving.

"November basketball can be ugly," said Steele after Tuesday's 77-68 loss to Wisconsin. "Every team's going to look significantly different in March than they do in November. It starts in practice. We need to develop those habits so when the game lights are on, our guys can execute."

The first significant test for Xavier came after just two games -- perhaps too soon for the rebuilding Musketeers. For a while, it wasn't pretty. The Badgers, who led by as many as 18 points, had no intention of being the latest victim of 'Cintas Magic.'

Even after the Musketeers whittled an 11-point lead down to two at halftime and raised the volume of the standing-room only throng of 10,312, one of the Big Ten Conference's proudest programs took the fight to their Big East Conference foes with a 16-4 run to start the second half.

Xavier was chasing the Badgers the rest of the night.

"I think we fought back, and I'm proud of our guys for doing that," Steele said. "But you can't spot a team (16) points to start the second half when you had to claw back into it in the first half. There are no moral victories. We want to win, we play to win. But we have to get a lot, lot better."

The Musketeers hadn't lost a non-conference home game since Dec. 22, 2012, a span of 41 games. Coming into Tuesday, Xavier owned an .873 winning percentage at Cintas Center, fourth-best in the nation. XU's last loss at home was to Villanova last February.

The Musketeers' last home non-conference loss was a shocking defeat to Wofford. Losing to the Badgers on Tuesday was hardly an upset, especially with Ethan Happ delivering an All-American level performance for them with 30 points, 11 rebounds, and five assists.

However, despite being largely dominated for stretches in Tuesday's game, the Musketeers could have made it a one-possession game with 18 seconds remaining when Quentin Goodin's 3-pointer was negated by a charging call on Naji Marshall, who finished with a career-high 23 points and 13 rebounds.

Xavier was left to consider what could have been.

"We just lost focus," Marshall said. "We lost focus on the defensive end. We lost intensity. That's kind of been our deal this season. The way they came out in the second half … we have to lock in and finish games. We have to mature more as basketball players."

For programs that have met only six times before Tuesday, Xavier and Wisconsin have had an eventful recent history.

Last year's meeting in Madison got a little testy with the UW student section's relentless badgering of Musketeers guard J.P. Macura who scored 20 points and dished out some trash talk of his own with a "Gator Chomp" gesture late in the Musketeers' 80-70 win, in homage to Florida ousting the Badgers on a last-second shot in the 2017 Tournament.

Following his dagger ‘3' with 1:06 left, Badgers guard Brad Davison gave the Xavier student section a "Gator Chomp" of his own to cap off the seventh all-time meeting.

The question going into Tuesday's game was how Xavier would manage to defend the Badgers without fouling. The Musketeers' bench already is thin with just 10 scholarship players. No Xavier players fouled out, but Paul Scruggs picked up two early fouls, and Goodin and Tyrique Jones had four at the end.

Xavier allowed 16 made three-pointers in the first two games, and Wisconsin made good on nine of its 16 long-range attempts on Tuesday. However, the Musketeers who trailed by as many as 11 in the half, closed the first half on a 12-4 run and trailed by only two points at halftime, 30-28.

"We clawed our way back with great energy," Marshall said. "But we have to maintain it."

Xavier did an admirable job creating open looks on the offensive end, but they couldn't knock them down, going 5 for 24 from 3-point range on Tuesday. Ryan Welage who went 6 of 13 from 3-point range in his Musketeers debut against IUPUI is 1 for 7 from long range since.

Zach Hankins had a double-double with 11 points and 10 rebounds and did Yoeman's work to prevent Happ from having an even bigger offensive night. But the Musketeers had no answer for Wisconsin's three-headed monster of Happ, D'Mitrik Trice, and Davison who scored 71 of the Badgers' 78 points.

November is a time for teaching moments. Because Xavier has never been shy about testing itself in the non-conference schedule, there are more harsh lessons to be learned. The Musketeers' upcoming trip to Maui features a matchup with ninth-ranked Auburn and a potential date with top-ranked Duke.