Here's how much FC Cincinnati owners, family gave to Cranley, commission members ahead of election 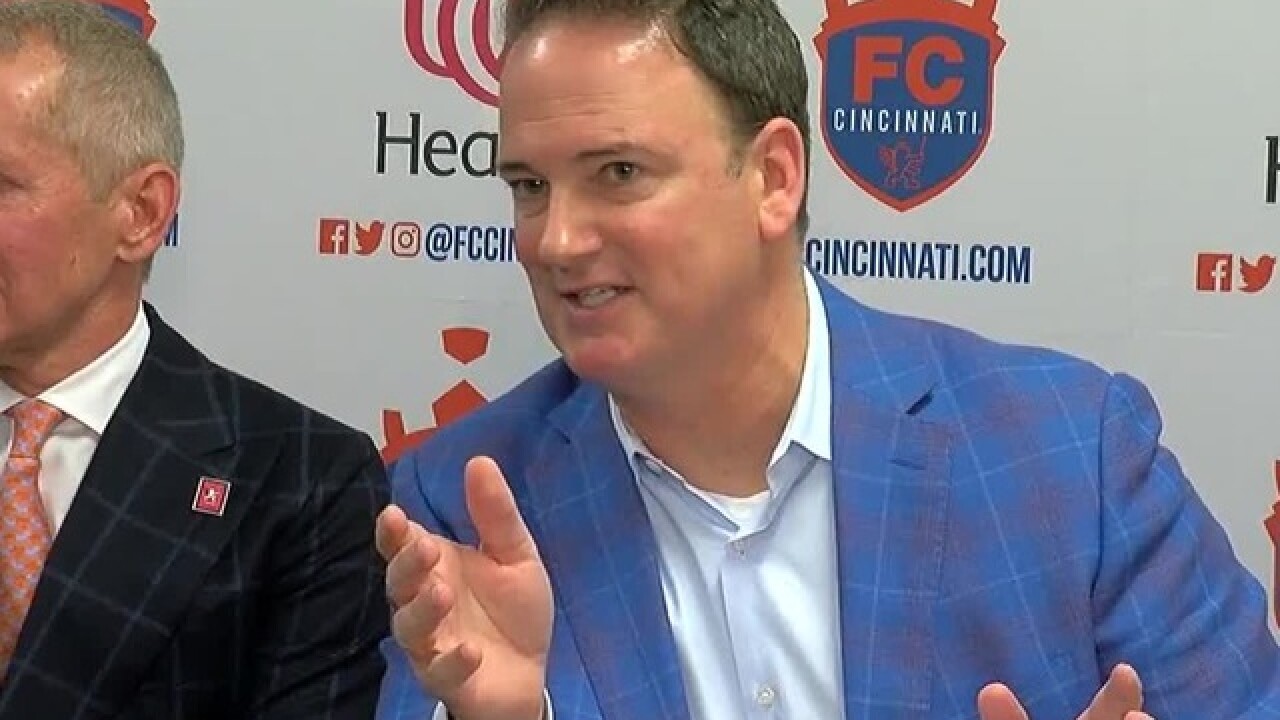 FC Cincinnati’s owners and their family members gave at least $112,000 to local campaigns in 2017, donating the most to Cincinnati Mayor John Cranley, who has been very supportive of a new soccer stadium coming to the city.

Nearly every one of FC Cincinnati’s owners donated to Cranley’s re-election campaign – but none gave anything to Cranley’s challenger, City Councilwoman Yvette Simpson. While both are Democrats, Simpson was more tepid in her support of a new stadium.

A dozen people who have been named as owners of the soccer team -- from Carl Lindner III to Middletown business owner Stephen Hightower -- gave Cranley a total of $15,050. In many cases, their spouses, siblings, children or parents matched the donation on the very same day.

In all, FC owners and their families gave $53,000 to Cranley in 2017, according to campaign finance reports released so far this year.

“All these folks have been supporting me for my entire public career and I appreciate their support, which goes back to my time on council,” Cranley said. “I make all decisions based on what is right for the city and donations have no influence over that.”

Hamilton County Commissioner Chris Monzel, a Republican who runs for re-election next year, has received $40,500 from FC Cincinnati owners and their family members so far this year. Monzel has opposed the idea of building a new stadium.

Just weeks before FC Cincinnati unveiled its stadium plan in June, both Lindner and Cintas CEO Scott Farmer wrote checks totaling $7,500 to Monzel, according to finance reports filed in July.

“When people contribute to my campaign they’re contributing to me as an individual,” Monzel said. “There’s no pay to play.”

FC Cincinnati General Manager Jeff Berding has been pressuring the county commission to support the project. At a press conference on Tuesday, Berding praised Cranley for his leadership, but questioned where the commission stood on the plan.

"At this point, it is rather unclear if the county shares the vision," Berding said at a press conference Tuesday.

The commission meets Wednesday to decide whether to use $2.8 million of its hotel tax revenue every year for the next 30 years to help fund the stadium project. That money would help pay for new roads and a 1,000-space parking garage, among other things.

Berding said the club will privately fund its own $200 million soccer-specific stadium. But without some public money -- specifically, $75 million for infrastructure at the site -- the deal won't happen.

The concept is a 21,000-seat stadium in Oakley, which would meet the minimum bid requirement for Major League Soccer.

While Cranley has been adamant that no city tax dollars should be spent on building a new soccer stadium, he has supported using other tools, such as tax abatements, and help with zoning and regulatory approvals, to get the stadium built.

“FC Cincinnati is taking the city by storm, it’s part of what makes this city so attractive with amazing amenities,” Cranley said at a debate sponsored by WCPO in April. “I don’t believe that tax dollars should go into the stadium. But I’m an active fan of the sport.”

Cranley has been so enthusiastic that he named Lindner and Berding as Cincinnatians of the Year in his 2016 State of the City Speech last October.

When MLS Commissioner Don Garber visited Cincinnati in November 2016, Cranley urged residents to wear FC team colors by calling it “Blue and Orange Day,” and he took Garber on a tour of the city.

In contrast, Simpson’s support for a new stadium was more reserved and it carried some conditions.

She received no donations from FC owners, and only a single donation from one of Lindner’s cousins for $1,100.

“I don’t think public dollars should be used to support the stadium,” Simpson said at the April debate. “I think that FC Cincy is a great team … but we have very important priorities right now and I don’t think that’s it.”

Simpson did support the idea of helping FC Cincinnati build a new stadium by using the same tax abatements any other developer would receive. But she wanted FC owners to build the stadium in a disadvantaged neighborhood and pay all employees working at the stadium at least a $15 an hour living wage.

“When they look for a new space I do hope they pick someplace like Bond Hill or Roselawn, someplace where they could actually use that investment to help lift the entire community and not be tempted to go over the river or choose somewhere where they might be able to get some incentives. They are FC Cincinnati after all,” Simpson said at an April debate.

If the stadium project receives tax abatements or tax increment financing (or TIF, a public financing method used as a subsidy for development projects), city council would almost certainly need to approve it.