Route X: Do city leaders get their snow plowed more often than everyone else?

This winter he watched snowplows clear Raeburn Drive -- where Flynn lives -- multiple times a day, but his street was often ignored for hours. During an early March snowfall, not a single plow showed up on his street, city data confirmed.

Hamp has always wondered if favoritism is at play.

“That wouldn’t really surprise me if that was going on … because I know a councilman lives in my neighborhood and they clear Raeburn pretty quickly and pretty frequently,” Hamp said. “I think if a councilman lived on our street it probably would get plowed more frequently.”

In January, WCPO asked city officials if a special snowplow route existed just for the streets of elected leaders.

Two months later the city produced a list that included the home streets of Mayor John Cranley, City Manager Patrick Duhaney, former Department of Public Services Director Maraskeshia Smith, and the nine city council members who were in office from 2013 to 2017.

Route X is not an actual snowplow driving route, but a list of streets where elected leaders live. It has existed within the city’s Department of Public Services for at least 15 years, and possibly for decades. 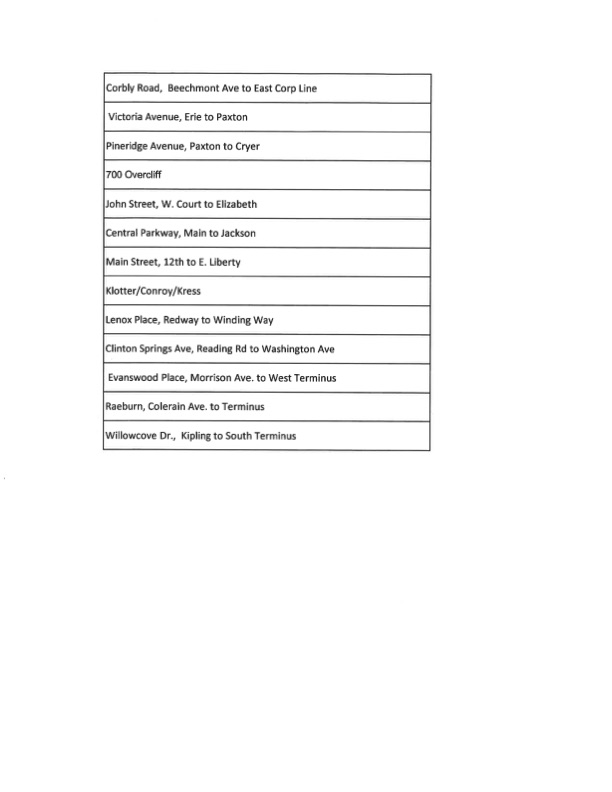 “Actually the first time I learned it existed was when we got your public records request,” Duhaney said.

They insist it was not used to give special treatment to elected leaders.

“Never is there a situation where we would say that a street of the managers would get greater priority than say River Road or Glenway or something like that,” Duhaney said.

In a city memo released in response to WCPO's report on Monday, Wilkerson wrote that he, "immediately ordered that no list be used or maintained."

"While the exact intended purpose of the document is not entirely clear, it is the interpretation of current DPS leadership that the list functioned as a reference material for supervisors that was used to help gauge the effectiveness of the winter operations team," the memo stated. "There was no evidence the listed streets were treated or serviced more than other residential streets during the most recent winter season."

But city data analyzed by WCPO revealed startling information about how much time snowplows spent on the streets of some elected leaders, such as Mayor John Cranley.

Jarrod Bolden, who oversees city snowplow operations, first heard about Route X when he was hired at the city’s Department of Public Services 15 years ago.

Bolden said the list was used over the years for “awareness” and “informational purposes,” but not to provide special treatment to city leaders.

“It was something that I think some supervisors had and they maintained to ensure that the streets of these particular people on the list were covered,” Duhaney said. “It was really something that probably staff was being cognizant on in case they got complaints from the mayor or the manager.”

But former city councilman Kevin Flynn, whose street was unknowingly listed on Route X, doubts this was always the case.

“It doesn’t make sense, Paula," Flynn said. "Why have that Route X if nobody is supposed to get special attention? It seems like there’s a real purpose there. And that’s wrong. Because while I’m happy to get my snow plowed, so is every other person in the city of Cincinnati.”

Like other leaders, Flynn had no idea that Route X existed. But he questions why city resources were spent to create a list in the first place.

“Somebody created this," Flynn said. "That in and of itself took city time and used city resources just to create the route. If it’s not being used for anything, as you’ve been told, why create it?”

The list does not contain the list the streets of new council members, only those who served until 2017. Six of them were re-elected and still serve on council.

On Monday WCPO reached out to all six current council members whose home streets are, or were, listed on Route X, but only Councilman David Mann agreed to an interview.

"It's not good. I don't expect my street to be tended to any sooner than anyone else's," Mann said. "We should suffer through storms with everybody else."

Mann had never heard of Route X until WCPO's report. But he's glad Duhaney ordered that it never be used again.

"The idea that someone would receive a preference just because they happen to hold an office is not right," Mann said. "What I understand is we're not going to have a list going forward and that's exactly what the answer should be."

City officials say they aren’t sure which public services employee created the list and who last updated it.

Route X was kept on the general list serve of the public services department’s shared drive, so “it could have been numerous people who updated the list,” Duhaney said. “The closest thing we can tell is that it was probably updated around February of 2018.”

Duhaney believes that date coincides when he was named assistant city manager.

Now that Duhaney knows about Route X, he has banned city workers from ever using it again.

“There is no such list being used right now with staff," Duhaney said. "Once Director Wilkerson and I sat down and we talked about it we made it clear to staff that this list -- any activities or supervision that was provided as it relates to this list -- must desist."

“I was not aware that this list existed and only learned about it when WCPO made a public records request," Cranley said. "I have never asked for preferential treatment and have asked City Manager Duhaney to ensure that any such practices stop. Under no circumstances is it appropriate for elected officials to receive preferential treatment of any kind as it relates to snow removal or any city services. Over the last several months City Manager Duhaney and Director Wilkerson have worked to improve the culture and morale at DPS, increasing service delivery for all Cincinnatians.”

Flynn admits that his street is always plowed first and more often than surrounding streets in his subdivision.

“I assumed that was the reason that it got the priority was we didn’t want people sliding into Colerain Avenue and causing accidents,” Flynn said. “It’s shameful if we got special attention because I happened to be on city council.”

Flynn lives on a main road that is classified by the city as priority level one, meaning that snowplows clear it first.

His neighbor, Shawn Hamp, lives on a side street that is considered a lesser priority for plows.

Using the city’s own data, which is available to the public on the city’s website, WCPO compared Hamp’s street to another lower priority residential street where Cranley lives to see who got better service last winter.

“I think if a councilman lived on our street it probably would get plowed more frequently,” Hamp said.

City data showed that Hamp got 14 visits from snowplows last winter on his Mount Airy street.

Across town in Hyde Park, Cranley’s street got 34 visits – more than double.

Snowplow drivers also spent far more time on Cranley’s street than other nearby streets. On three occasions plows spent 25 to 41 minutes on his street, making four to six passes per visit.

Wilkerson questioned the accuracy of this city data.

“I would question that data," Wilkerson said. "You know, sometimes we can make numbers say whatever we want and make it whatever narrative we want.

“Considering that we have over 3,000 miles of roadway in 52 neighborhoods around the city … honestly we don’t have much time to sit around at someone’s house for an exorbitant amount of time just to provide a particular service at the detriment to other folks in the city. We just don’t have it."

Duhaney and Wilkerson say no city leader has ever asked for favors for trash pickup, pothole repair or snow removal. 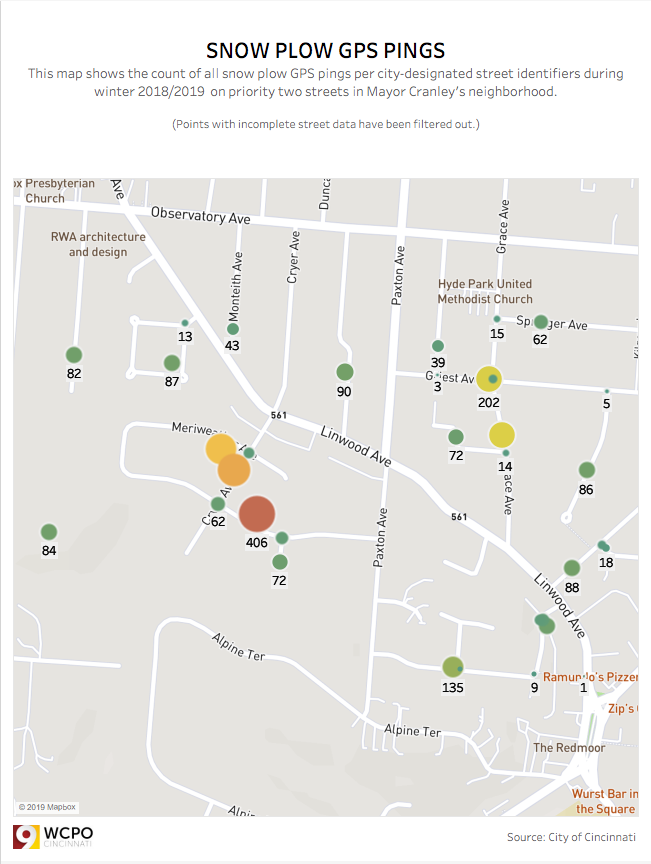 When plows visit Duhaney’s street he often stops to speak with drivers about their work, which may show up as longer plow visits on his street.

“It could be that the mayor wanted to speak to the public services employee to get a sense of how plowing is going on a particular day," Duhaney said. "I know its something I myself do when I catch a snowplow driver on my street,”

Duhaney lives on a narrow street in Sayler Park that neighbors say is plowed by a small city pickup truck.

“We’re a dead-end street here and we don’t get a whole lot of attention,” said Duhaney’s neighbor, Joe Trotta.

That hasn’t changed since Duhaney moved to the street more than a year ago, Trotta said.

But that data may not show if plows actually went down the narrow stretch of road where Duhaney’s home sits.

Regardless, Duhaney insisted that Route X will never be used by city workers again.

“I will never under my watch have our public services department treat anybody differently than we would treat the common citizen of Cincinnati,” Duhaney said.