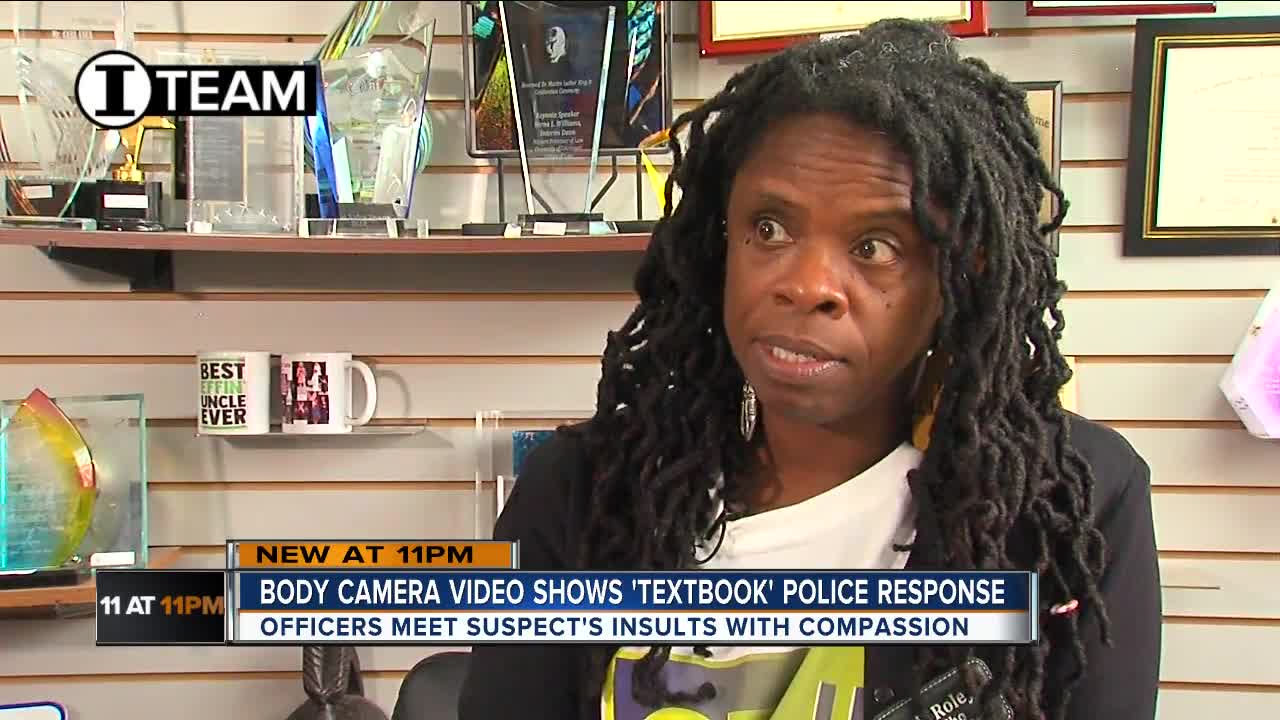 WCPO asked four longtime observers of local policing practices to watch the two body camera recordings of CPD officers' interactions with Ricky Nelson. Then, we asked for their honest opinions of how the officers handled the situation. 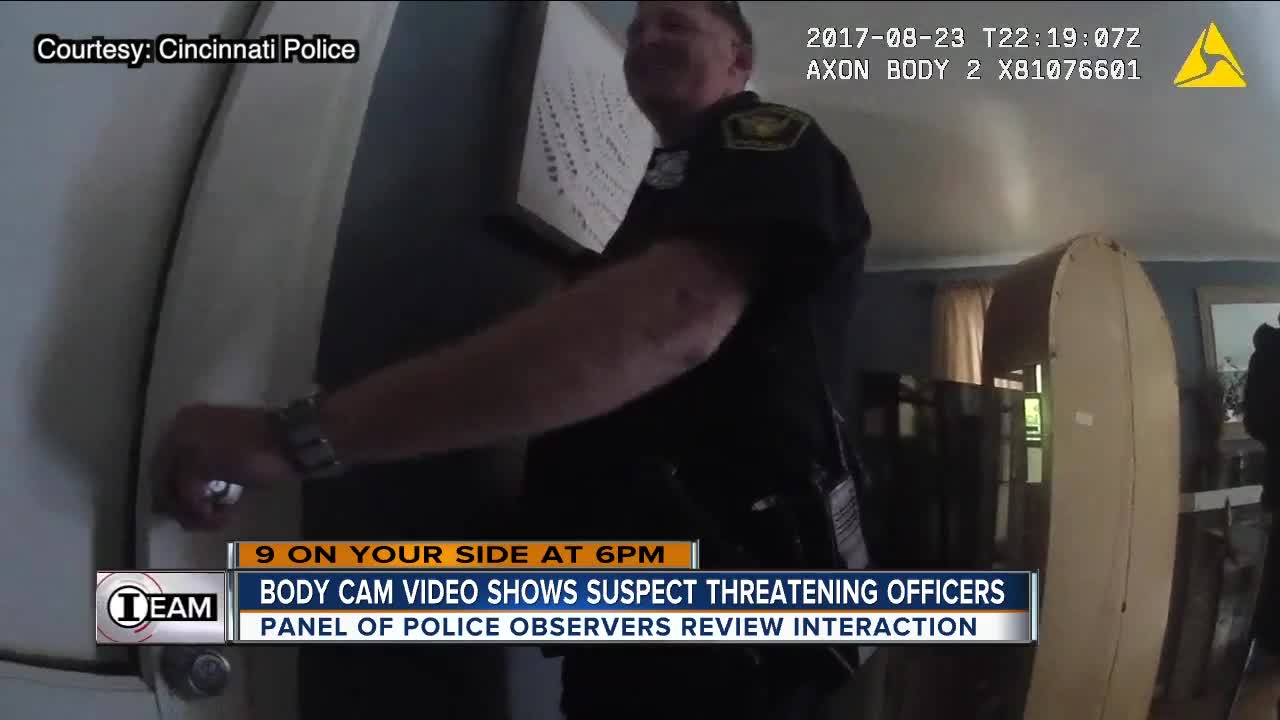 CINCINNATI — Ricky Nelson hated police. And he wasn't afraid to say it.

Police body cameras recorded him repeatedly telling officers so in 2017.

The 36-year-old has an image of an angel with folded wings tattooed across his back.

But his behavior recorded on the body camera footage WCPO obtained from May and August of that year could be interpreted as less than angelic.

In May 2017, Cincinnati Police officers Todd Pierson and Nic Stavale waited with Nelson as he was booked into the Hamilton County Justice Center on disorderly conduct and menacing charges. Nelson repeatedly called Pierson, who is African American, the n-word.

The recording shows Pierson look at Nelson and chuckle.

In August 2017, Cincinnati officers responded to a report of assault in Westwood. CPD body cameras recorded two men describing how Ricky Nelson started fights with them.

The officers entered Nelson's home and found him hiding behind a door with his dog. Nelson repeatedly cursed and threatened the officers, who tried to talk him out.

The WCPO I-Team investigated the two responses involving Nelson as part of our year-long investigation of police use of force at 32 local departments. During our investigation, WCPO examined several hundred police body camera recordings of use-of-force incidents. Police use-of-force experts criticized some of the officers and the lack of accountability for their actions.

But WCPO also documented cases of officers showing restraint, even when they used force to subdue suspects with weapons.

WCPO asked four longtime observers of local policing practices to watch the two body camera recordings of CPD officers' interactions with Ricky Nelson. Then, we asked for their honest opinions of how the officers handled the situation. Our panel included:

What did we learn?

Cincinnati police officers Kraig Kunz and Weston Voss arrived at Knowlton Tavern a few minutes after midnight to investigate a complaint about a disorderly customer. The bar manager told the officers the customer had broken a bottle and grabbed another patron.

"I think his name is Rick," she told the officers, pointing toward a man next to a car outside. "That could be him. If that's a heavyset white guy, that's him."

Kunz and Voss walked toward Ricky Nelson, who walked away from them, ignoring their requests to stop.

"If you touch me, you'll face a lawsuit," Nelson said.

"I don't care if there's a lawsuit," Kunz responded.

Kunz and Voss brought Nelson down to the sidewalk but didn't appear to inflict injury upon him.

Nelson screamed, "Oh my god!" then said, "Hey, record this!"

"We are recording it," Voss said.

The body camera recordings show they didn't warn Nelson he could be arrested before they had him in cuffs, which some members of our panel pointed to as problematic.

"I don't ever want to see anyone not being told that they're about to be arrested and what they're being arrested for," Iris Roley, of the Cincinnati Black United Front, told WCPO as she watched the videos at her family business.

Civil rights attorney Al Gerhardstein complimented the officers for linking two sets of handcuffs together instead of using just one, which gave Nelson twice as much room to maneuver.

"That was a good move to cuff him in a way that kept him comfortable," Gerhardstein told us. Roley, FOP president Hils and State Sen. Cecil Thomas agreed.

As the officers cuffed Nelson, he pounded his head against the concrete and moaned, the body camera footage shows.

"We're recording you throwing your head into the ground right now, " Voss said to Nelson. Once Voss and Kunz lifted Nelson to his feet, Nelson said the officers "beat me with their batons," even though the video shows the officers didn't use their batons.

Nelson put his knee in the way of the door when officers tried to put him in the car.

"Watch your knee," an officer said. "I don't want to have to push it in there."

Five minutes later, the body cameras recorded Nelson accusing the officers of breaking his leg. Nelson complained of other injuries that didn't appear to exist, but officers drove him to University Hospital anyway. CPD filed an "injury to prisoner" report, which described Nelson as having a superficial abrasion on his forehead.

Cincinnati police helped Nelson get out of the car, then escorted him toward the entrance to the hospital. Another group of CPD officers walked toward them.

"I don't want no black cops touching me," Nelson said.

"Oh, why was I expecting that?" one of the African American officers said.

Officer Pierson, who drove Nelson to the hospital, laughed. "Well, we were friendly for a minute."

WCPO asked Thomas if he'd been treated like that when he was a Cincinnati police officer.

Thomas said the key to dealing with people like Nelson is to "maintain your composure at all times. This is a good example of well-trained officers recognizing that this individual is trying to draw them into his state of mind, and they're not buying it."

Still, Nelson didn't let up. The police body cameras recorded Nelson in the exam room with police and nurses. Nelson insisted that he only wanted white officers in the room.

After the exam, Officers Pierson and Stavale took Nelson to jail, where Nelson called Pierson a 'n*****' 6 times.

Roley flinched as she watched Nelson use the n-word.

"Overall, I like the response from the officers," she said. "And, I like how they handled it."

They received a call that Nelson had assaulted two men and let his dog attack another.

"I'm telling you right now she's a vicious dog," said a woman who identified herself as Nelson's fiancee. She said the dog will attack if it's next to Nelson and believes he's being threatened.

Nelson's mother, Tina Nelson, was recorded telling the police that her son had bipolar disorder and schizophrenia. Another family member described him as suicidal.

Officers continued interviewing Nelson's family members and neighbors, who told officers they believed Nelson was inside his home with the dog.

Sgt. Robert Lind, along with input from other officers, developed a plan for how to approach Nelson and get him to surrender. Officers cleared the house, then determined Nelson was hiding behind a door that opened to a stairway leading upstairs. The dog -- which can be heard barking and growling on the body camera recordings -- was with him.

"Ricky, come down and talk to us, buddy," Officer Zachary Sterbling said through a small opening separating the door from the wall. "We gotta make sure you're OK."

After about 10 minutes of negotiations, Nelson demanded that police leave his house and repeatedly slammed himself into the door.

Sterbling punched through the weakened upper panel of the door. Officers fired Tasers at Nelson and his dog, and took them into custody.

Civil rights attorney Gerhardstein noted that officers should have warned Nelson he was about to get zapped with a Taser. Other than what Gerhardstein noted as Taser-related violations, "I think they dealt with the situation at least as peacefully as possible."

Thomas didn't believe the officers needed to warn Nelson he might be shocked with a Taser.

"I don't think you need a warning at this point. Ricky has already shown that he's not cooperating," Thomas said. "The moment you get an opportunity to tase him, you've got to tase him."

Thomas said he wondered why the officers didn't call a special response team, commonly referred to as a SWAT unit. He also told us officers put themselves at risk by piling into the opening of the door to pull out Nelson. But, overall, he described the police response as "professionalism at its best, treating individuals the way you're trained to treat them."

FOP President Hils wasn't concerned about the officers who handled the negotiations with Nelson.

"That could have been a SWAT call, but again you can make decisions by the cast and crew that you've got around you," Hils said. "They came up with a plan and executed it - flawlessly - in my mind."

On the recording, Ricky Nelson's mother, Tina, waited outside her son's home. There were several pops of a Taser, and a scream.

"I just don't want him to die," she told a man standing next to her. Tina Nelson insisted her son had a loving heart, but she also "knew how Ricky was," especially when he used drugs and got angry.

After officers placed Ricky Nelson in a police car, he started to cry.

"Are you going to behave for us?" Lind asked him.

"I know," Lind said with compassion that Nelson's mother still remembers. "I know."

Tina Nelson stood next to the police car.

"You don't need to be mean to these men, Ricky," she said.

In a recent phone interview with WCPO, Tina Nelson said she wishes things could have gone differently that day in the house. But she understands that police have a job to do.

"They don't know what they're walking into and I get it," Tina Nelson told me. "They did what they were supposed to do. That was their job."