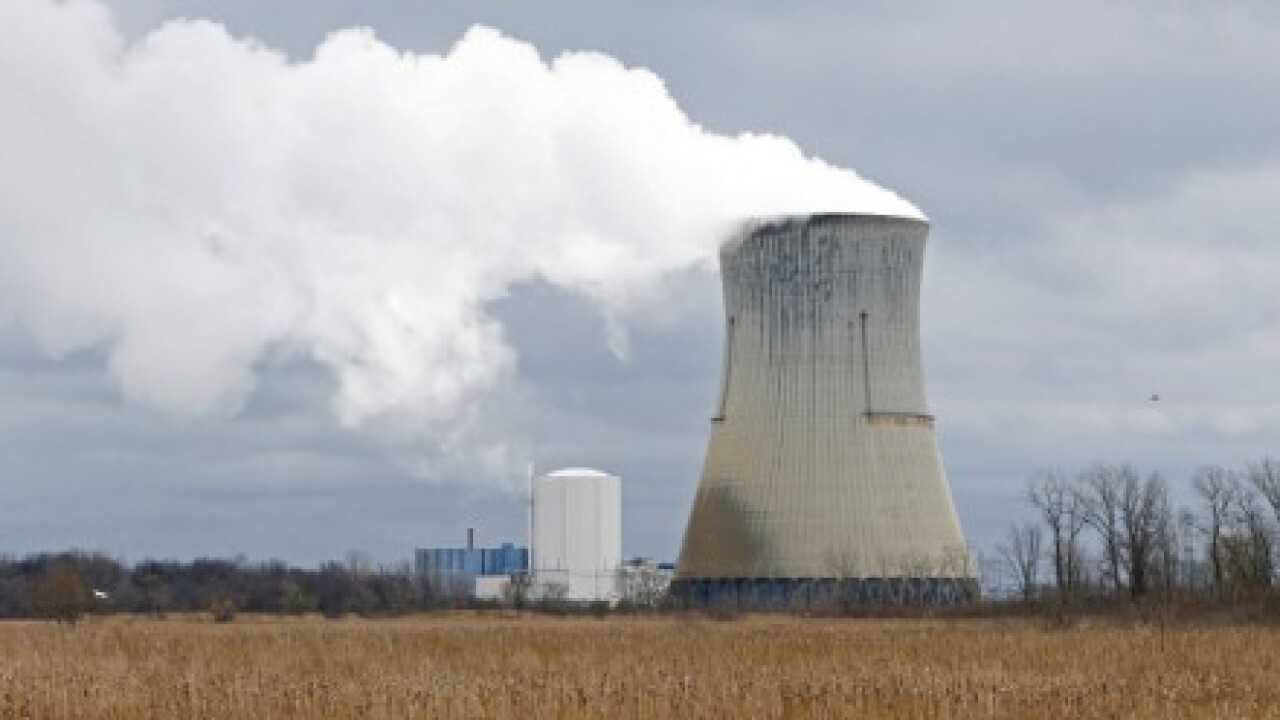 (Copyright 2020 The Associated Press. All rights reserved. This material may not be published, broadcast, rewritten or redistributed.)
AP Photo/Ron Schwane
This April 4, 2017, file photo shows the entrance to FirstEnergy Corp.'s Davis-Besse Nuclear Power Station in Oak Harbor, Ohio. A nuclear plant bailout law is at the center of a bribery scandal involving one of the state’s most powerful lawmakers.

Randazzo, 71, submitted his resignation letter to Republican Gov. Mike DeWine, who had appointed him chairman of the Public Utilities Commission of Ohio and the Ohio Power Siting Board in February 2019.

Randazzo said in the letter dated Friday that the “events and news of this week have undoubtedly been disturbing or worse to many stakeholders.”

FBI agents were seen carrying boxes from Randazzo’s Columbus townhome during a search on Monday.

“I regret that I must step away, but it is the right and necessary thing to do,” Randazzo said in his resignation letter. He also touted improvements he said he made during his time as chair of both agencies.

The FBI has not said whether the search of Randazzo’s home is tied to a federal investigation of a $60 million bribery scheme secretly funded by FirstEnergy Corp. to win legislative passage of a $1 billion bailout for two nuclear plants. Until February, the plants were operated by a wholly owned FirstEnergy subsidiary.

House Republicans have pledged to have a resolution to House Bill 6 by the end of this legislative session, which ends Dec. 31.

At an unrelated news conference on Friday, DeWine thanked Randazzo for his service saying, “He has done very, very good work as chair.”

In the filing, FirstEnergy said former top executives had directed the payments in early 2019 to a consulting firm “in connection with the termination of a purported consulting agreement” in place since 2013. The payments violated FirstEnergy’s policies, the filing said.

The recipient of the millions is “an entity associated with an individual who subsequently was appointed to a full-time role as an Ohio government official directly involved” in regulating FirstEnergy, the filing said.

The company has fired five top executives in the last month, including CEO Chuck Jones.

The dual role of utilities commission and siting board chair is one of the most powerful positions in state government, wielding extraordinary influence on the regulation of utility profits and charges to customers. The siting board has oversight approval for new electric-generating facilities in the state.

Bruce Weston, executive director of the Ohio Consumers’ Counsel, said in a statement on Friday that utility consumers “may think the regulatory system is rigged against them.”

“Things need to change and that change should begin with real reform of how PUCO commissioners are appointed and who gets appointed in the state,” the statement said.

“Sam Randazzo’s ties to FirstEnergy influenced decision after decision at the PUCO and sabotaged the growth of Ohio’s clean-energy future,” Rachael Belz, who directs both organizations, said in a statement.

State Rep. David Leland, a Columbus Democrat, said in a statement that Randazzo’s resignation is evidence that House Bill 6 needs to be repealed. The Legislature for months has been considering whether to repeal and possibly replace the bailout legislation.

“The only way we can show Ohio is not for sale is to repeal HB6 — and Republican leadership is the only thing keeping that from happening,” Leland said.

Vice Chairman M. Beth Trombold will move into the commission’s top spot, the PUCO said in a statement. The Public Utilities Commission Nominating Council, on which Randazzo served before being appointed chairman, is charged with beginning the process of filling the vacancy.