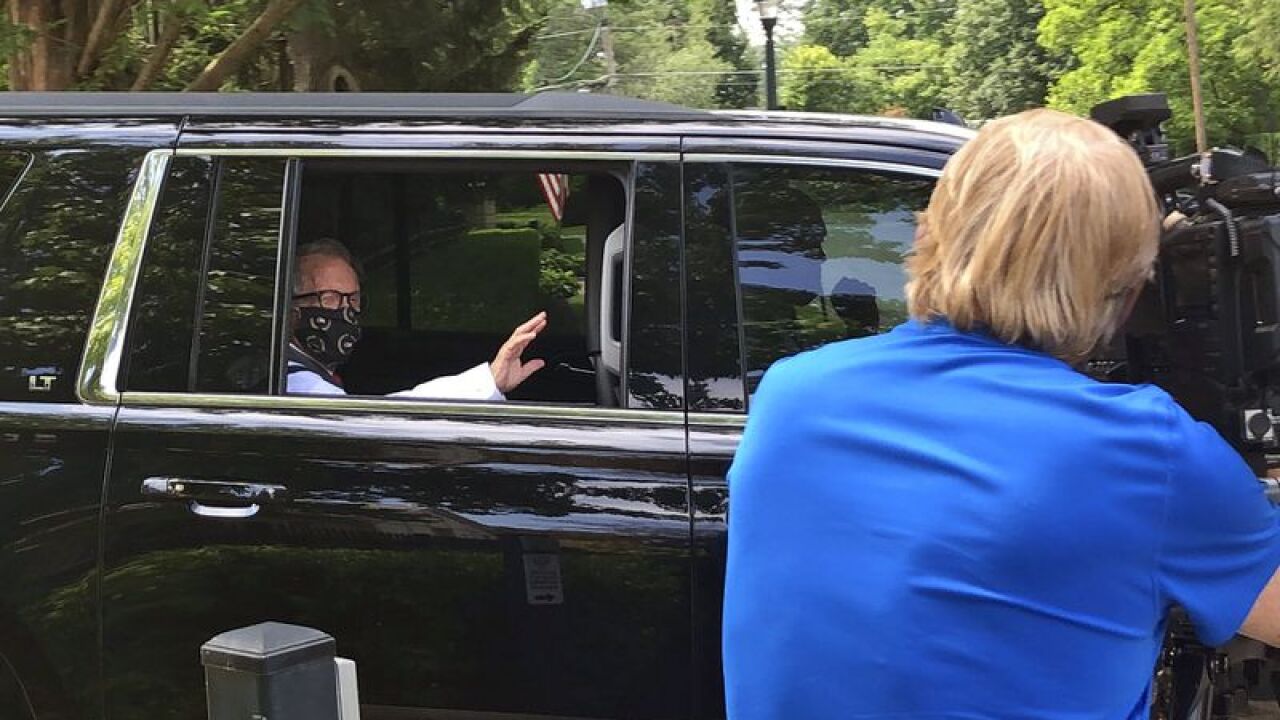 Ohio Gov. Mike DeWine waves to journalists gathered outside his official residence as he leaves for his family home in Greene County where he planned to talk about his positive coronavirus test, on Thursday, August 6, 2020, in Bexley, Ohio. The Republican DeWine, an early advocate among Republicans of wearing masks and other pandemic precautions, tested positive Thursday for the coronavirus just ahead of a planned meeting with President Donald Trump. (AP Photo/Andrew Welsh-Huggins)

Ohio Gov. Mike DeWine on Tuesday announced a new jobs program for Ohioans laid off during the pandemic and rankled slightly at repeated questions about the still-vacant position at the top of the Ohio Department of Health.

“I don’t think we’re in any different position than any state that would be hiring a health director,” he said, adding later: “We’ll find the right people.”

He had publicly offered the job of health director to South Carolina’s Dr. Joan Duwve on Sept. 10, only to receive an equally public refusal within hours. Speaking to another news outlet about her decision, Duwve referenced the harassment campaign that targeted her almost-predecessor, Dr. Amy Acton, as the reason she declined.

“In conversations preparing for the transition to the Ohio Department of Health, I was informed that the former director’s family had faced harassment from the public,” she wrote in a statement published by the Columbia, South Caroline-based newspaper The State. “While I have dedicated my life to improving public health, my first commitment is to my family. I am a public figure. My family is off limits. I withdrew my name from consideration to protect my family from similar treatment.”

Acton, who became one of many behind-the-scenes health officials thrust into view by the COVID-19 pandemic, served early on as the public face of Ohio’s pandemic response and appeared alongside DeWine in months of daily news conferences.

However, her presence attracted criticism from Ohioans who opposed masking mandates, orders closing schools and the government-mandated closure of certain businesses. Small groups — some of which included armed members — repeatedly protested outside Acton’s Bexley, Ohio home.

She resigned on June 12.

He said he had not attempted to conceal information about Acton’s reason for resignation from potential replacements and noted that many governments across the United States have faced the same challenges, including protests and resignations, in response to pandemic restrictions. He also pointed to the plurality of less visible public health officials still working across the state to contain the pandemic.

When asked whether the protests and Duwve’s decision to decline the job reflected badly on Ohio, DeWine objected and said the majority of Ohioans were working hard to slow the spread of the novel coronavirus.

He promised Acton’s former job would be filled eventually.

“In the meantime, we’re battling on,” he said.

DeWine noted that, although the death total was Ohio’s third-highest since the beginning of the pandemic, the numbers published each day do not necessarily correspond to the dates at which the deaths occurred. Various bureaucratic and investigative processes can delay a death being counted in the state’s official tally by up to three weeks, he said.

When asked whether the protests and Duwve’s decision to decline the job reflected badly on Ohio, DeWine objected.

DeWine also announced the start of a new program called Ohio to Work, an initiative meant to help Ohioans who have become unemployed as a result of the pandemic.
The effort will begin in Cuyahoga County, he said, but the state government hopes to expand it across Ohio.

Ohio to Work will connect job-seekers with coaches to help them develop job skills for new careers and local companies that have committed to interviewing program participants.

“Our board of directors agreed if we could help, we should help,” said J.P. Nauseef, CIO of the economic development program JobsOhio.

Ohioans hoping to learn more about Ohio to Work can do so here.