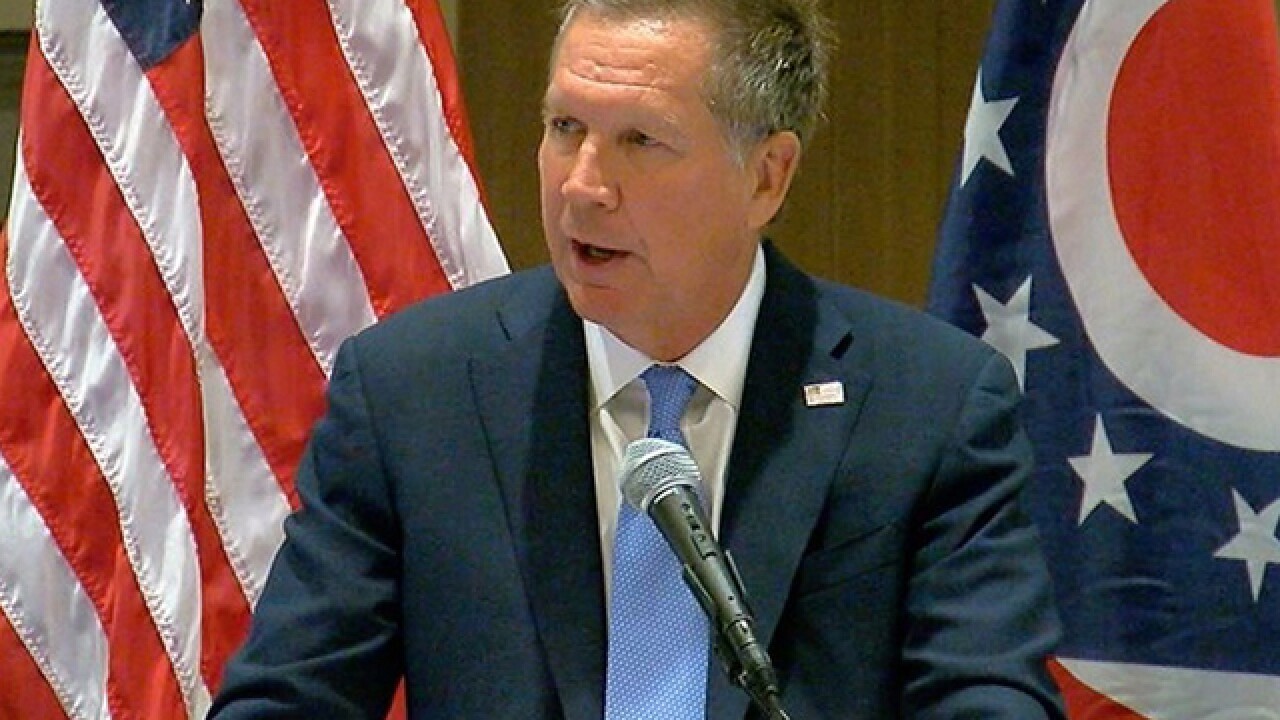 His advice came at a news conference with his budget director and the head of JobsOhio, the state's privatized economic development office, where Kasich touted a series of positive trends: Ohio's job creation rate is outpacing the nation's, unemployment is falling, wages are growing and 520,000 new jobs have been created.

"You run on this record," he said to the GOP's 2018 candidates, some of whom have distanced themselves from him.

Kasich, an outspoken critic of President Donald Trump since leaving the 2016 presidential race, said a "jobs and progress" message — one successfully used by the late Republican Ohio Gov. James Rhodes — can give people hope amid negative news out of Washington.

Yet some fellow Republicans in his closely divided political state continue to distance themselves from him, including Lt. Gov. Mary Taylor, who lost her bid for governor last month.

Besides refusing to endorse, campaign with or vote for Trump, Kasich has supported some positions that irk some Republicans, including supporting the Medicaid expansion allowed under the Affordable Care Act.

A Quinnipiac University poll released last week showed 69 percent of Ohioans are happy with the direction the state is moving in and Kasich's job approval rating remains strong — though more now among Democrats than Republicans.

Kasich said his budgets have employed techniques long favored by Republicans, including tax cuts and spending reductions. So, if Democrats like him, Republicans can use that to their advantage.

"When you get to an election, I think everybody votes," he said. "And so, I'll just say it to you, if you're up jobs, if your wages are growing, if your budgets are balanced and people are getting health care, what else would you have? We didn't throw all the immigrants out of Ohio. What would be bad about that (record)? I don't understand it."

David Pepper, chairman of the Ohio Democratic Party, said Ohio's job growth numbers are finally outpacing the national average for the first time since 2011, but it is not good enough.

"Unfortunately, the sad reality is that for many parts of Ohio, the recession never ended. Ohio's unemployment rate is still higher than the national average, last year we were the seventh most-moved-from state in the country and the majority of Ohio's most common jobs don't pay enough to cover the cost of rent," Pepper said.

Cordray, a former Ohio attorney general and director of the Consumer Financial Protection Bureau, has capitalized on Democrats' support for Kasich to embrace some of the Republican governor's positions.

In reaction to the Trump administration's actions on the border, Kasich tweeted on Monday, "Ripping up families is serious business. It's up to all of us to speak out."

Cordray tweeted in reply: "I agree with @JohnKasich. Having our children taken from Peg or me would be horrific. This is unthinkable."