Bevin defends pardoning convicted rapists, murderers on his way out of office 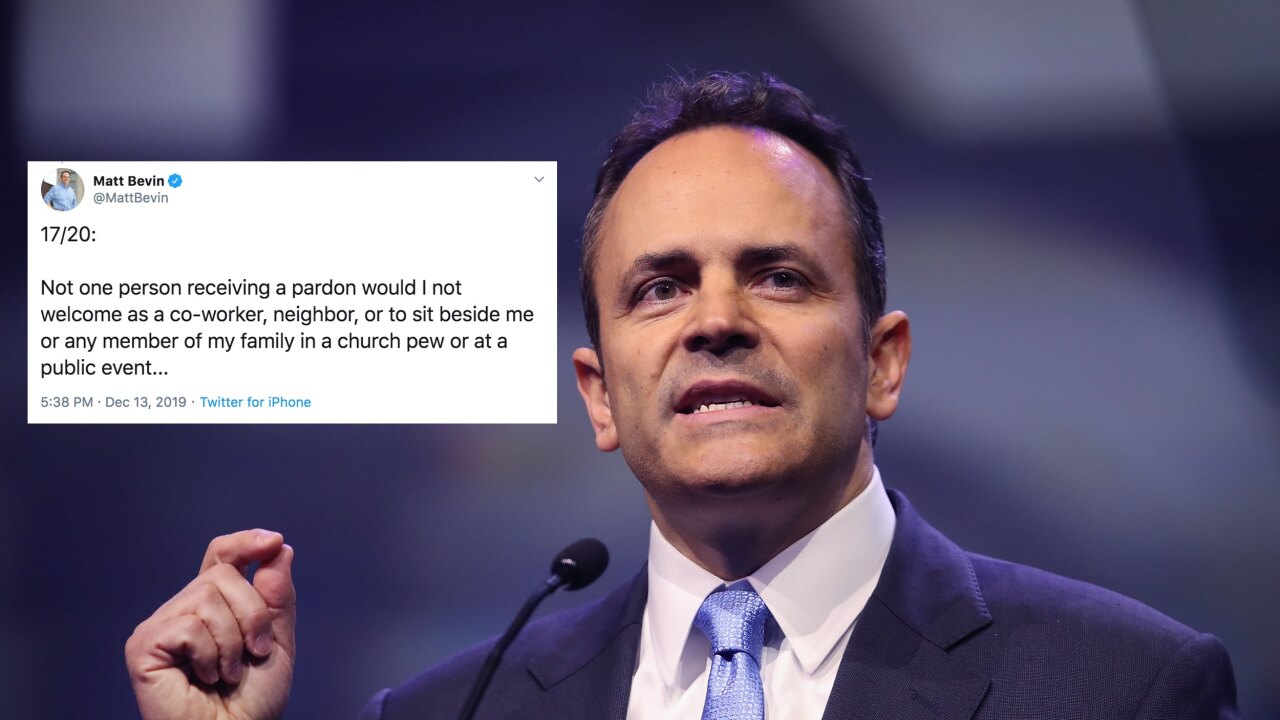 Former Kentucky Gov. Matt Bevin on Friday defended his widely condemned decision to issue hundreds of pardons and commutations on his way out of office, some to men convicted of brutal murders and sex crimes against children.

“America is a nation that was established with an understanding and support for redemption and second chances,” he wrote in a lengthy Twitter thread, adding later: “Not one person receiving a pardon would I not welcome as a co-worker, neighbor, or to sit beside me or any member of my family in a church pew or at a public event.”

In the thread, Bevin described poring over thousands of pages of documents connected to the cases, speaking to convicts and learning of mitigating factors his “arm-chair critics are not aware of.”

But the pardons felt like a “slap in the face” to the mother of one middle-school-aged victim, who told WCPO Thursday her family had only just begun to feel safe again after the conviction of 41-year-old Micah Schoettle in 2018.

Schoettle, convicted of rape, sodomy and sexual abuse, was sentenced to 23 years in prison. Bevin’s pardon secured his release after 18 months and ensured he will not have to register as a sex offender.

According to the Associated Press, Bevin wrote in his decision that Schoettle had been convicted based only on testimony, not physical evidence.

“It's an abomination of the criminal justice system,” he said.

“Gov. Bevin’s pardons show what is a shocking lack of judgment and potentially an abuse of our system of justice,” McGarvey said.

Stivers said he felt Bevin should be investigated. Another Republican legislator proposed legislation that would strip outgoing governors of pardoning power during their last month in office.

Other recipients of Bevin’s final pardons and commutations included Delmar Partin, convicted of killing and beheading a coworker in 1994, and Patrick Brian Baker, convicted of impersonating a police officer to break into another man’s home before fatally shooting him in 2014.

Baker’s family raised $21,500 at a political fundraiser in 2018, and Baker’s brother and sister-in-law gave $4,000 to Bevin’s campaign on the day of the fundraiser.

Bevin’s thread defending his actions accrued hundreds of responses, many angrily comparing his decision to pardon men convicted of violent crimes with his term-long feud with Kentucky’s public school teachers.

At one point during a series of 2018 teacher protests that canceled classes across the state, Bevin told reporters he considered protesting teachers directly responsible for any harm that came to Kentucky children while school was not in session.

He later said his comments had been misunderstood.

On Friday, he wrote: “Am I perfect? No... Never have been... But I did my very best, over many hours, days, weeks and years, to reach fair and just decisions.”

“Just tweet through it my man,” one user responded.