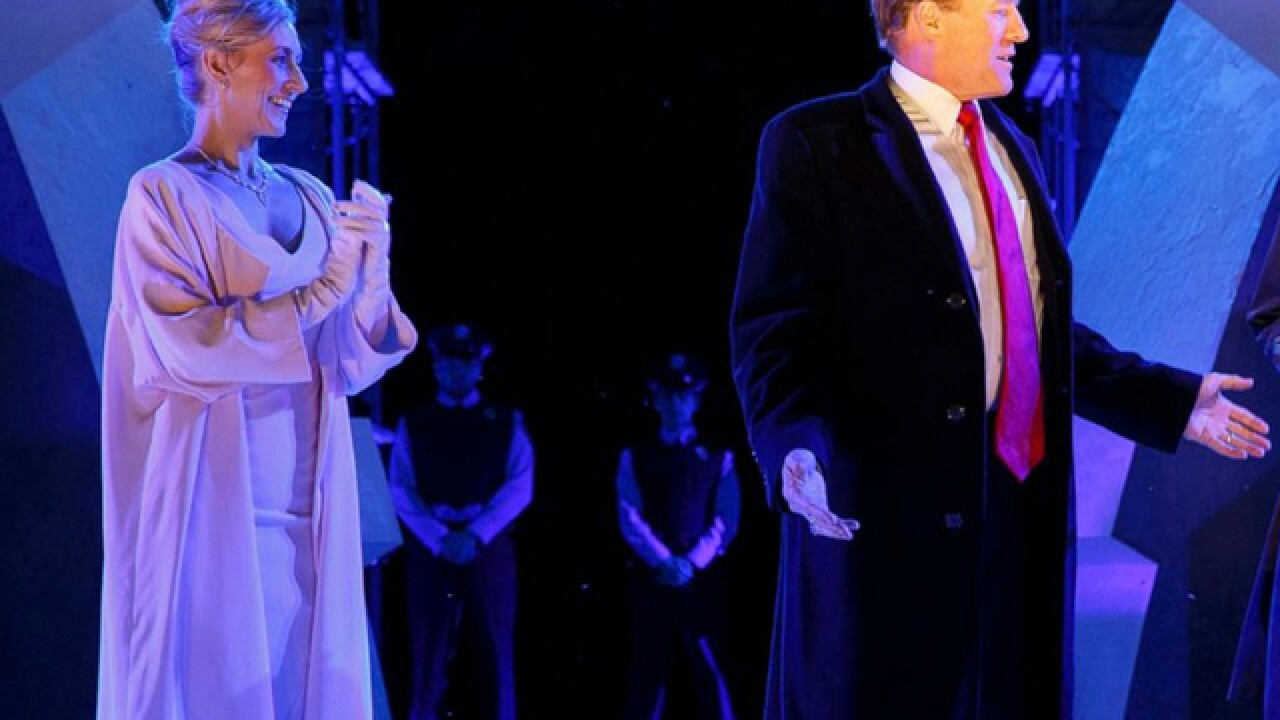 NEW YORK (AP) — The Public Theater is refusing to back down after backlash over its production of “Julius Caesar” that portrays a Donald Trump-like dictator in a business suit with a long tie who gets knifed to death onstage.

Delta Air Lines and Bank of America have pulled their sponsorship of the Public’s version of the play, but in a statement Monday, the theater said that it stands “completely behind” the production. It noted that its staging has “provoked heated discussion” but that “such discussion is exactly the goal of our civically-engaged theater; this discourse is the basis of a healthy democracy.”

Other defenders included Scott M. Stringer, the New York City comptroller, who sarcastically tweeted to both Delta and Band of America: “What a mistake. Actually reading Julius Caesar might help in the future. Your copy is in the mail.”

This modern-day Caesar’s violent death at the hands of conspirators comes not long after comedian Kathy Griffin was widely condemned for posing for a photograph in which she gripped a bloodied rendering of Trump’s head.

Though the Public’s version of William Shakespeare’s classic play is unchanged from its 400-year-old original, the production portrays Caesar with a gold bathtub and a pouty Slavic wife. Trump’s name is never mentioned but backlash was swift.

On Sunday, Donald Trump Jr. retweeted a Fox News story about the play and wrote, “I wonder how much of this ‘art’ is funded by taxpayers? Serious question, when does ‘art’ become political speech & does that change things?”

Delta responded by saying “artistic and creative direction crossed the line on the standards of good taste.” American Express, which in the past has sponsored productions at the Public’s downtown theater, said it is not a sponsor of Shakespeare in the Park or this production of “Julius Caesar,” adding: “We do not condone this interpretation of the play.”

Bank of America claimed it was bamboozled. It said the Public chose to present the play “to provoke and offend” without the bank’s knowledge: “Had this intention been made known to us, we would have decided not to sponsor it.”

“Julius Caesar” ends its run Sunday. The comedy “A Midsummer Night’s Dream” begins in the park on July 11 under the direction of Lear deBessonet.

The National Endowment for the Arts, which Trump once proposed eliminating, said in a statement that while the Public’s Shakespeare programing has received its grants in the past, none were awarded for “Julius Caesar” or for funds supporting the New York State Council on the Arts’ grant for the Public.

Theater-lovers were quick to point out that a national tour of “Julius Caesar” in 2012 by The Acting Company featured a Caesar played by a black actor in a modern business suit who had a resemblance to then-President Barack Obama. Sponsors of the Guthrie Theater apparently had no objections — including Delta — when that show landed in Minneapolis.

The Public has long protected its role as incubator of provocative and challenging works, unafraid to mount plays that comment on current events or update Shakespearian plays to explore modern themes.

It’s had Trump in its sights before. The Public is the same institution that birthed the megahit “Hamilton” — whose cast members last year implored then-Vice President Mike Pence to support diversity — and where Meryl Streep donned self-tanner and a fat suit last summer to impersonate Trump at a gala fundraiser.

Laurence Maslon, an administrator and arts professor at New York University’s Tisch School of the Arts, said it was disingenuous for large corporations who have backed the Public for years — and enjoyed co-opting its downtown cool vibe — to sound alarmed now.

“You’ve got to know what you’re getting into,” he said, adding that the Public has “50 years of the most provocative, politically engaged work. It’s called the Public Theater for a reason.” He backed Eustis, saying “Oskar is nothing if not brave.”

In 2006, Eustis dedicated the summer season in Central Park to three works that focused on foreign affairs — “Stuff Happens,” in which David Hare looked at the debates in Washington in the lead-up to the Iraq war, a militaristic production of “Macbeth” set in the early 20th century, and a “Mother Courage” with a new translation by Tony Kushner that had references to tax exemptions for the rich.

Its production of “Twelfth Night” in 2009 touched on the debate over marriage equality and a “Measure for Measure” in 2011 dug deep into the notion of politicians’ sexual hypocrisy.

Maslon thinks any loss of funding the Public experiences from corporate defectors will be compensated for by donations from liberal grass-roots groups and people worried about the apparent threat to artistic freedom.

The Public isn’t the only theater project trying to address the advent of Trump. On Broadway, Jon Jon Briones, who plays the sleazy Engineer in a revival of “Miss Saigon,” makes a sarcastic reference to the Trump campaign slogan, “Make America Great Again.”

The recent off-Broadway play “Building the Wall,” by playwright Robert Schenkkan, imagined the country under Trump’s campaign promise to detain immigrants living in the country illegally. And filmmaker and activist Michael Moore is also bringing a one-man show taking on Trump to Broadway this summer.