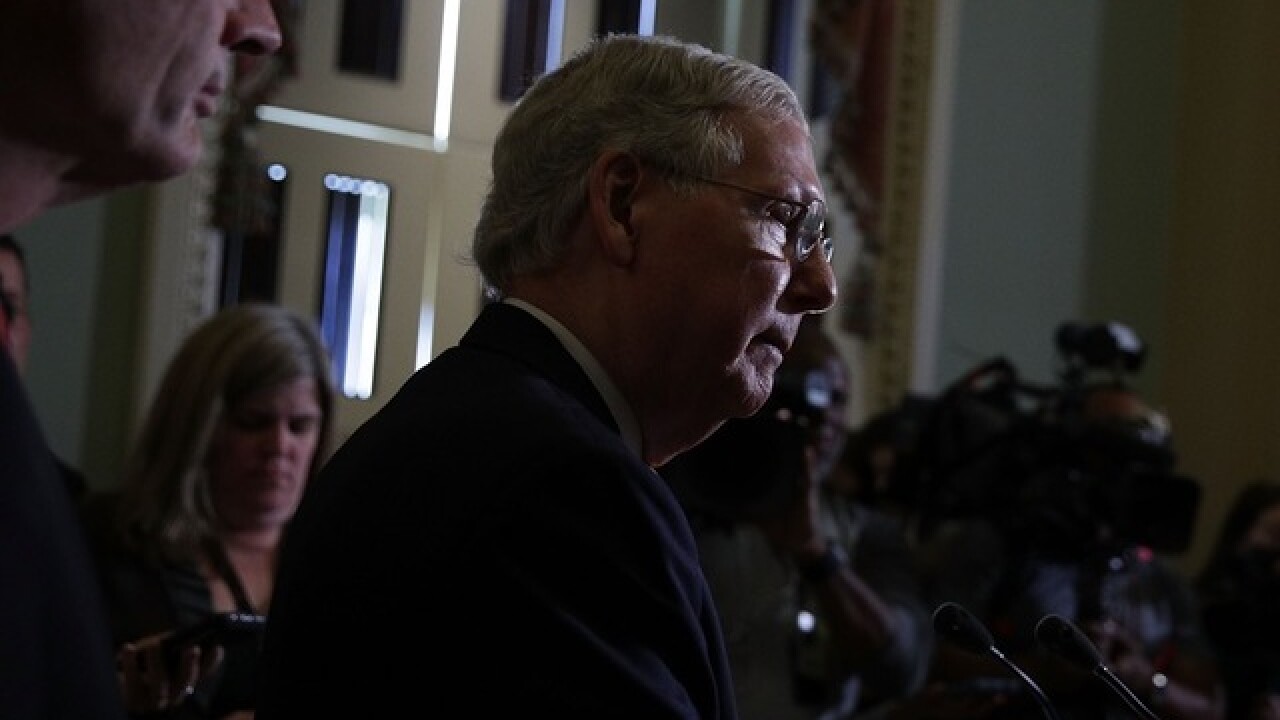 WASHINGTON -- Senate Majority Leader Mitch McConnell invited all Republicans on Tuesday to join with what's been an all-male working group of GOP senators to craft a health care bill, after facing criticism that women were being excluded.

"McConnell stood up and said, 'Please come and participate,'" Sen. Shelley Moore Capito, R-W.Va., said in an interview, describing the Kentucky Republican's request to GOP senators during a lunch. She also said, "I think they are opening up those meetings. I don't even know if they had any closed meetings."

The male-only makeup of the 13-member group had been a distraction as GOP senators begin writing their bill repealing much of President Barack Obama's health care overhaul, one of the party's top priorities. Earlier Tuesday, McConnell fended off criticism of the group's membership, saying all 52 GOP senators were shaping the legislation.

"The working group that counts is all 52 of us, and we're having extensive meetings" daily, McConnell told reporters. "Nobody's being excluded based on gender."

The all-male makeup of the group was clearly an irritant among some of the chamber's five GOP women. It also became a target for Democrats eager to paint the evolving Republican legislation as a measure that's damaging to women needing medical care, even as key decisions are being made by men.

"That's really up to the leadership," Sen. Susan Collins, R-Maine, the longest-serving female GOP senator in her 21st year in the chamber, said of the group's lack of women. "It seems to me they've already made their decision. The panel has apparently been meeting for some time, and I'm not a member of it."

Asked about the group, Sen. Lisa Murkowski, R-Alaska, said, "I just want to make sure we have some women on it."

Capito, who's criticized House-approved cuts in the Medicaid program for poor and disabled people, attended Tuesday's private meeting of the working group. Her state is among the 31 that has accepted additional money to expand Medicaid under Obama's law.

The GOP drive to write health care legislation has shifted to the Senate, five days after Republicans pushed a version of it through the House.

GOP senators have made clear they will likely make substantial changes in the House bill. Some have criticized that measure's cuts in the Medicaid program for poor and disabled people, the federal subsidies that would leave many consumers with higher out-of-pocket costs and the estimated 24 million people who'd lose coverage.

The 13 senators McConnell appointed to the informal group include himself and other party leaders and committee chairmen, conservative mavericks, lawmakers from states that expanded Medicaid under the Affordable Care Act and others.

"I think the more voices that we can put on a panel to help get this done, the better. So, to the extent - I'm not going to tell Leader McConnell or the White House is not going to tell him how to conduct a panel," Spicer said.

Senate Minority Leader Chuck Schumer, D-N.Y., said the House bill "is so discriminatory against women." He cited a provision that could let insurers levy higher premiums on some people with pre-existing medical conditions, which in the past has included pregnancy.

"It's a very, very bad thing" to exclude women from the working group," he said.

One of the Senate's most moderate Republicans, Collins, 64, has at times been a problem for party leaders, such as opposing a cutoff of federal payments to Planned Parenthood. She's viewed as one who might vote against the GOP bill.

Collins is the 15th longest-serving current senator and hasn't missed a roll call vote since entering the chamber, a streak her office says reached 6,352 votes Tuesday.

Collins told reporters that GOP women senators "are not afraid to make their voices heard." She said she's working with Sen. Bill Cassidy, R-La., on an alternative health care overhaul and with other senators on how to revamp Medicaid.

She said she'd spent 15 minutes at Tuesday's Senate GOP lunch describing a high-risk pool Maine uses to help cover costs for people with serious diseases who are expensive to treat. She said to replicate Maine's program nationally would cost $15 billion yearly, "which I do not see in the House bill."