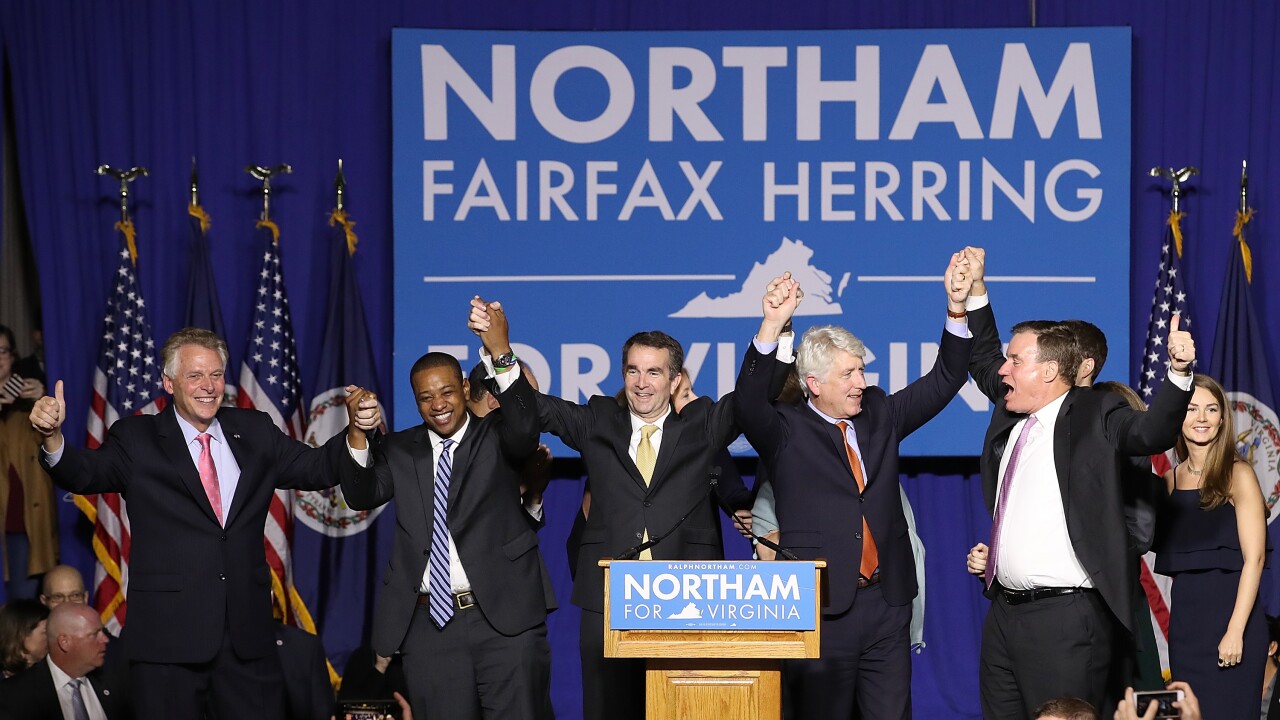 RICHMOND, Va. (AP) — The political crisis in Virginia exploded Wednesday when the state’s attorney general confessed to putting on blackface in the 1980s and a woman went public with detailed allegations of sexual assault against the lieutenant governor.

With Gov. Ralph Northam’s career already hanging by a thread over a racist photo in his 1984 medical school yearbook, the day’s developments threatened to take down all three of Virginia’s top elected officials, all of them Democrats.

The twin blows began with Attorney General Mark Herring issuing a statement admitting he wore brown makeup and a wig in 1980 to look like a rapper during a party as a 19-year-old student at the University of Virginia.

Herring — who has been among those calling on Northam to resign — said that he was “deeply, deeply sorry for the pain that I cause with this revelation” and that the days ahead “will make it clear whether I can or should continue to serve as attorney general.”

Then, within hours, Vanessa Tyson, the woman whose sexual assault allegations against Lt. Gov. Justin Fairfax surfaced earlier this week, issued a detailed statement saying Fairfax forced her to perform oral sex on him in a hotel room in 2004 during the Democratic National Convention in Boston.

Tyson, a 42-year-old political scientist who is on a fellowship at Stanford University and specializes in the political discourse of sexual assault, said, “I have no political motive. I am a proud Democrat.”

“Mr. Fairfax has tried to brand me as a liar to a national audience, in service to his political ambitions, and has threatened litigation,” she said. “Given his false assertions, I’m compelled to make clear what happened.”

The Associated Press typically does not identify those who say they were sexually assaulted, but Tyson issued the statement in her name.

Fairfax — who is in line to become governor if Northam resigns — has repeatedly denied her allegations, saying that the encounter was consensual and that he is the victim of a strategically timed political smear.

“At no time did she express to me any discomfort or concern about our interactions, neither during that encounter, nor during the months following it, when she stayed in touch with me, nor the past 15 years,” he said in a statement.

Tyson said she suffered “deep humiliation and shame” and stayed quiet about the allegations as she pursued her career, but by late 2017, as the #MeToo movement took shape and after she saw a news article about Fairfax’s campaign, she took her story to The Washington Post, which decided months later not to publish a story.

Herring, 57, went public after rumors of a blackface photo of him had circulated at the Capitol for a day or more. But in his statement, he said nothing about the existence of a photo.

The disclosure further roils the top levels of Virginia government, which has been hit with one crisis after another since the yearbook picture came to light last Friday. Herring would be next in line to be governor after Fairfax.

After Herring comes the speaker of the state House, Kirk Cox, a conservative Republican.

Herring made a name for himself nationally by playing a central role in getting Virginia’s ban on gay marriage lifted, and he had been planning to run for governor in 2021.

The chairman of the Virginia Legislative Black Caucus, Del. Lamont Bagby, said its members need time to process the news about the attorney general: “We’ve got a lot to digest.”

Democrats have expressed fear that the uproar over the governor could jeopardize their chances of taking control of the GOP-dominated Virginia legislature this year. The party made big gains in 2017, in part because of a backlash against President Donald Trump, and has moved to within striking distance of a majority in both houses.

At the state Capitol, lawmakers were practically dumbstruck over the fast-moving events, with Democratic Sen. Barbara Favola saying, “I have to take a breath and think about this. This is moving way too quickly. My goal is to be fair to everyone concerned.” GOP House Majority Leader Todd Gilbert said it would be “reckless” to comment. “There’s just too much flying around,” he said.

In his statement, Herring said he and two friends dressed up to look like rappers they listened to, including Kurtis Blow, admitting: “It sounds ridiculous even now writing it.”

“That conduct clearly shows that, as a young man, I had a callous and inexcusable lack of awareness and insensitivity to the pain my behavior could inflict on others,” he said.

But he also said: “This conduct is in no way reflective of the man I have become in the nearly 40 years since.”

Northam has come under pressure from nearly the entire state and national Democratic establishment to resign after the discovery of a photo on his profile page in the Eastern Virginia Medical School yearbook of someone in blackface standing next to a person in a Ku Klux Klan hood and robe.

Northam admitted at first that he was in the photo without saying which costume he was wearing. A day later, he denied he was in the picture. But he acknowledged he once used shoe polish to blacken his face and look like Michael Jackson at a dance contest in Texas in 1984, when he was in the Army.

Herring came down hard on Northam when the yearbook photo surfaced, condemning it as “indefensible,” ″profoundly offensive,” and “shocking and deeply disappointing.” He said that it was no longer possible for Northam to lead the state.

Herring earned bachelor’s and master’s degrees from the University of Virginia and his law degree from the University of Richmond, and served as a county supervisor and a state senator before getting elected attorney general in 2013 by just 165 votes out of more than 2.2 million cast. He won re-election by a more comfortable margin in 2017.

Shortly after taking office for his first term, Herring announced he would no longer defend the state’s ban on gay marriage, saying it was time for Virginia “to be on the right side of history and the right side of the law.”