All of the pressure and none of the glory: How party chairs find humor in 'grueling' jobs 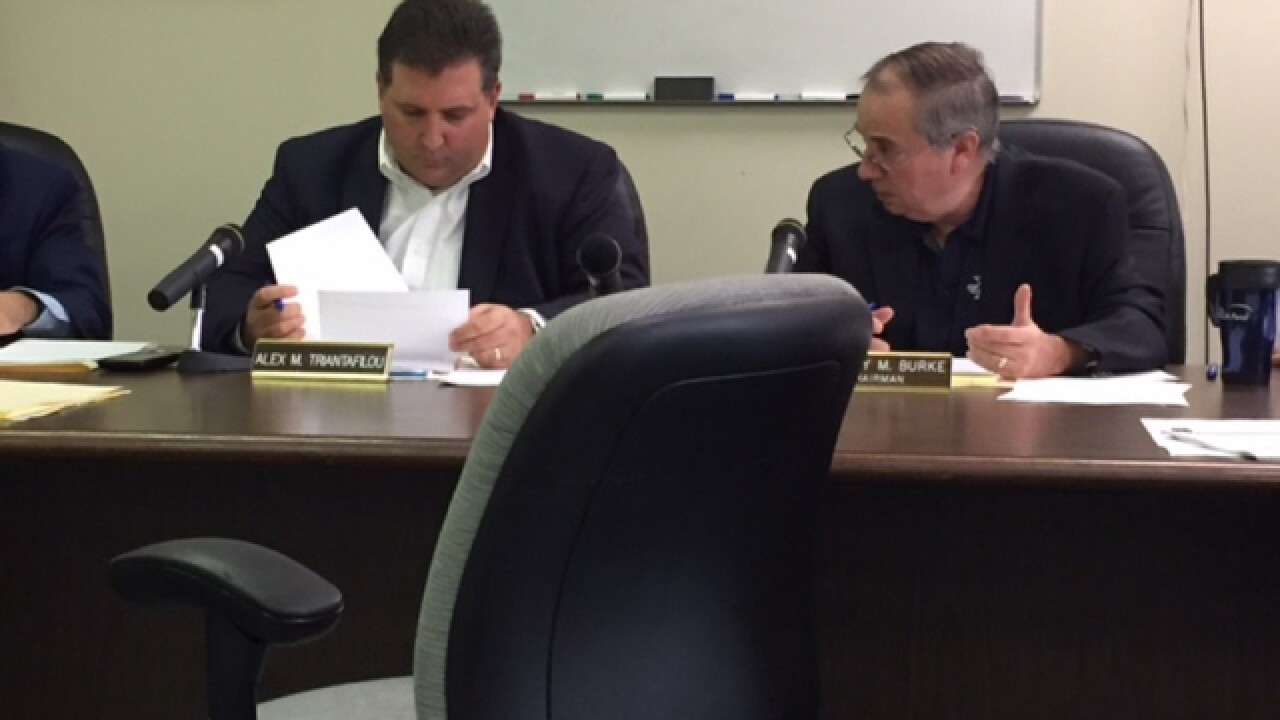 <p>Alex Triantafilou and Tim Burke at the Hamilton County Board of Elections meeting Oct. 11, 2016. </p> 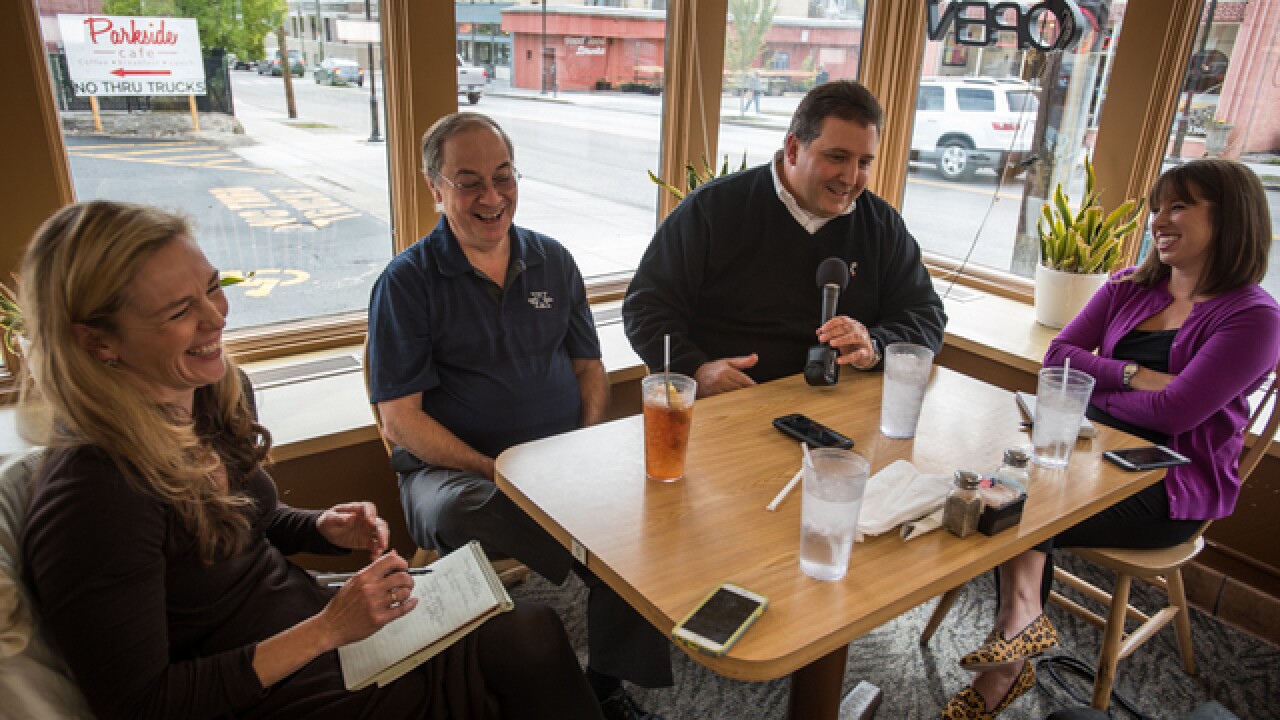 They don’t have enough power to put Hillary Clinton or Donald Trump in the White House.

But they carry the pressure and the blame when things don’t go well for their parties in in this crucial corner of Ohio.

Hamilton County Republican Chairman Alex Triantafilou and Democratic Chairman Tim Burke are used to the national attention that descends on this swing county during every recent presidential election. But this year, with two historically unpopular candidates, their jobs seem a lot harder.

“We are just lowly county party chairmen who just try to piece it all together,” Triantafilou said.

Follow a day in the life of Alex Triantafilou  or Tim Burke .

As party chairmen, they volunteer to find candidates to run for each local office and then help them win. They are the faces of their local parties – the last line of defense during this cringe-worthy year of politics.

Last week was particularly brutal for Triantafilou. After the release of a lewd tape from 2005 in which Trump bragged about kissing and groping women, Triantafilou spent his day on the phone asking for advice from party loyalists and rallying troops at a volunteer center.

“I’m not a spokesman for the Trump campaign. They haven’t asked me to do that. I represent the brand,” Triantafilou said. “He happens to be the national spokesman for the brand right now. But we’ve got candidates up and down the ballot that we care about.”

The bitter feud between Cincinnati City Councilman Chris Seelbach and Mayor John Cranley, who are both Democrats, has quietly simmered, in part because of their strong mutual support for Clinton. But it will likely re-flame next year during the mayoral race.

“You develop a real thick skin in this job,” Burke said. “The single most frustrating thing that I have to deal with is trying to get Democrats to work with one another.”

With three weeks to go until Election Day, Burke and Triantafilou are exhaustingly busy trying to keep up with their full-time law practices, plus putting in face time at evening fundraisers, calming the nerves of local candidates and overseeing the county Board of Elections, of which both are members.

It is a strange dance for Burke and Triantafilou, who often appear at media interviews and debates together touting their opposing political views. And they have fought a few partisan wars over the years – such as the outcome of the 2010 judicial court race with Tracie Hunter.

“We battled that out for over a year, but we still managed to sit next to each other and talk,” said Triantafilou, who credits their civility to the fact that both are lawyers. “We know how to strap on our battle gear and then at least have a conversation afterward.”

Through it all, both have kept their sense of humor. Ahead of an interview with WCPO, the pair coordinated to wear garb from their opposing alma maters. Burke, in a Xavier University shirt, and Triantafilou, in a University of Cincinnati sweater, laughed about their longstanding rivalry over the Crosstown Shootout.

“Fighting with Tim is a natural state of being. That’s the way our democracy was set up - a two party system and we should have a healthy debate,” Triantafilou said.

The ‘political junkie’ who can’t quit

Triantafilou’s weekend took a jarring turn for the worst early in the evening of Friday, Oct. 7.

That’s when news broke about an 11-year-old recording of Trump bragging about groping women. The fallout soon slid all the way down to Triantafilou.

The next day he sent out a single Tweet that summed up both his mood, and his humor:

When I was kid, I thought about being a dentist. After today, maybe I should'a been a dentist. #politics #GOP #alwaysGOP

But even the bad days don’t dampen Triantafilou’s zeal for politics or, in his words, being a political hack.

“I’m a junkie – I don’t care who knows it – I’m a political junkie to my core,” Triantafilou said. “As tired as I get of it sometimes, I don’t think it’s ever going to go away for me. It’s part of who I am.”

Days later, when the crisis had calmed, Triantiflou was busy fielding phone calls and text messages from the Trump faithful, who were begging for a VIP ticket or a handshake with the GOP nominee at an upcoming U.S. Bank Arena rally.

“My voicemail filled up today,” Triantafilou said shortly before 4 p.m. last Tuesday. “I guarantee some of these calls are about access.”

There are plenty of other text messages ranging from the silly – former Hamilton County Commissioner Greg Hartmann talking about the week’s Fantasy Football matchup – to the pressing: deadline-driven reporters seeking interviews about the election.

Nothing, he hopes, will ever top the time he walked out of court just before 10:30 a.m. to 51 new text messages.

Yet Triantafilou always finds the time to push his message on Twitter and Facebook, where he typically posts at least three times daily, often with his thoughts on the news of the day or praise for a local candidate.

Even that can stir up controversy within his party as he gets accused of playing favorites if he talks up one candidate or attends one fundraiser over another.

“When you first start doing it you feel loved because everybody wants you,” Triantafilou said of his county chairman job, which he's held for eight years. “After a while, you know, I just can’t be at everything.”

“Always late,” Triantafilou said of when he finally lands at his Green Township home. “I don’t think I’ve been home before 9 (p.m.) that I can remember.”

On Tuesday night, Triantafilou arrived at a meet-and-greet event for Hamilton County Commission candidates Andrew Pappas and Dennis Deters a few minutes before 6 p.m.. He barely had time to shake hands with the party’s Green Township host before a woman approached and asked if he could speak at an upcoming Oak Hills Kiwanis club meeting.

Perhaps that’s why Triantafilou, a lifelong Greek Orthodox Christian, always visits a church on Election Day to light a candle and sit silently.

“I will typically find a church somewhere,” Triantafilou said. “I’ll find one somewhere, for 10 minutes, and take some quiet time. It’s not really about my candidate … it’s just a grueling process.”

Shortly after 4 a.m. he was at his downtown Cincinnati law office with his terrier mix, Buster, who comes to work with him every day.

With the start of early voting just a day away, it was clear this would be a busy Tuesday.

After an 8:30 a.m. Board of Elections meeting where Burke calmed a woman complaining about voter fraud and okayed ballot preparations for Election Day, he was back at his office pouring through more than 100 emails.

There was an Evendale Village Council meeting to get ready for that night, (he is attorney for both Evendale and Lockland) and preparations to be made for a visit by former president Bill Clinton to Cincinnati later that week.

If there are no evening fundraisers, Burke is usually asleep on the couch at 9 p.m.

“It gets pretty crazy … on some nights there’s so many things scheduled that you can’t get to them all,” Burke said. “Candidates are on tenterhooks. Everything is a crisis. Everything needs to be dealt with immediately.”

After 23 years as party chair, this is Burke’s sixth presidential election, so he knows the drill. Yet this year feels different.

“Presidential elections are always tense. This one is as nasty as I have ever seen,” Burke said. “This is the least civil campaign that I’ve seen and we’re going to be paying for it on both sides of the aisle for a long time.”

While he believes Triantafilou has the harder job of promoting and defending Trump, Burke has his own issues - such as county auditor Dusty Rhodes, a Democrat who routinely bashes Clinton and posts Twitter comments supportive of Trump.

“Dusty Rhodes, God love him, he’s always been a different Democrat,” Burke said. “I don’t know who he’s going to vote for. But he clearly does not like Hillary Clinton.”

And Burke worries whether the unpopularity of both Clinton and Trump will smother voter turnout and hurt local candidates, such as Denise Driehaus who is running for county commissioner.

“People are just upset with both sides,” Burke said. “And I fear that is going to discourage some voters.”

Whatever happens between now and then, Burke’s tradition will unfold as usual on Election Day. He will arrive before dawn at the Board of Elections with several dozen donuts. He’ll monitor how polling equipment is working, and drive out to any problem precinct.

Some years he has lunch at Price Hill Chili, cordially shaking hands with Republicans who sit on the opposite end of the restaurant.

Then he’ll watch the results and keep his fingers crossed.

When it’s over, he’ll go to Disneyland with his wife, two daughters and grandchildren for a week.

After that? Well, Burke hasn’t decided how long he’ll stay on as party chair.

“That’s a question I continue to ask. I will be 69 in February. It’s something I think about,” Burke said.

But Burke is not sure he’s prepared to give up the best part of the job: helping young candidates win their first offices. He still remembers David Pepper and John Cranley both fresh out of law school, long before Cranley became mayor and Pepper won a county commission seat and later state party chair.

“This can’t go on forever. I know that and I don’t want it to go on forever,” Burke said. “When people push me about when to give it up, I say ‘I’m definitely closer to the end than the beginning.’”