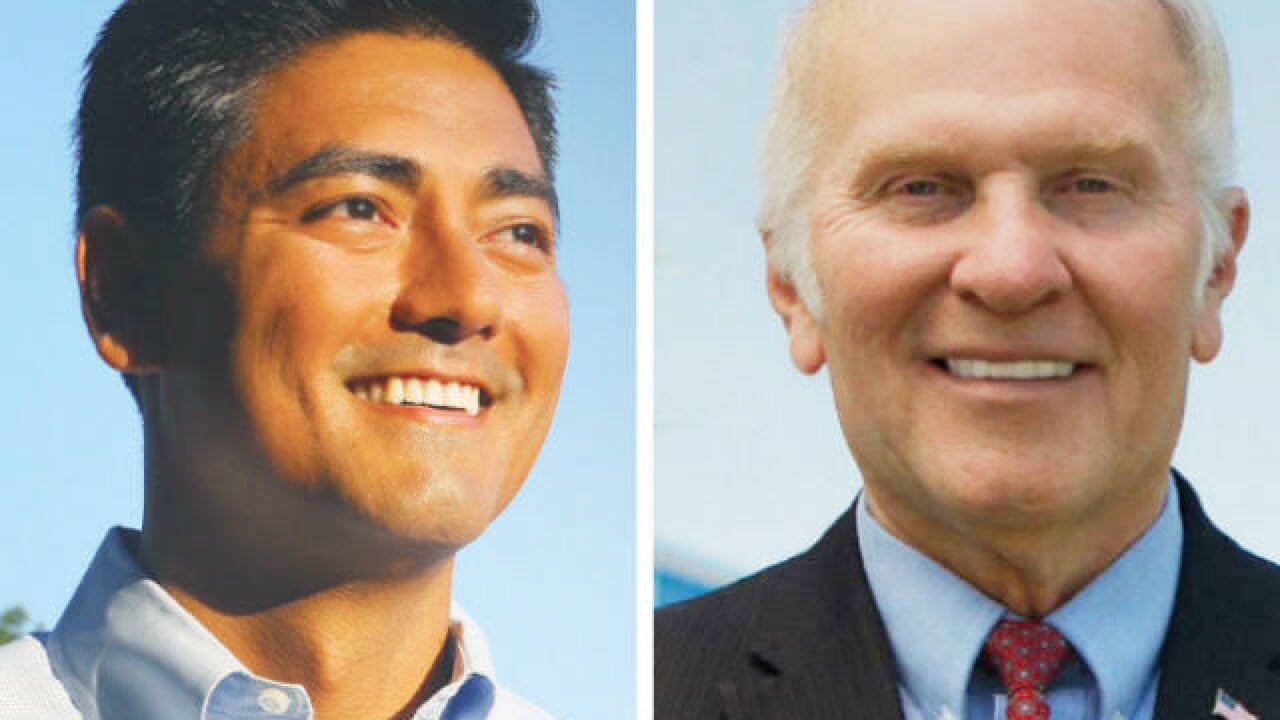 Copyright 2018 Scripps Media, Inc. All rights reserved. This material may not be published, broadcast, rewritten, or redistributed.
<p>Aftab Pureval and Steve Chabot</p>

But he shouldn’t worry about it jeopardizing his political career. After all, members of the “I Lost to Steve Chabot” club include Cincinnati Mayor John Cranley,  political consultant Steve Driehaus and Cincinnati Councilman David Mann.

Driehaus said Pureval could find consolation from how close the race ended in a gerrymandered district that put Democrats at a big disadvantage.

“This is a hundred yard dash with Steve Chabot starting on the 40 yard line. The guy’s slow, but he’s not that slow," said Driehaus, founder and CEO of Good Government Group LLC.

The unofficial tally puts Pureval in third place among the 10 Democrats who’ve lost to Chabot since 1994. Pureval’s 135,467 ranks behind Michele Young’s 144,644 votes in a 2016 losing effort, when President Donald Trump rose to power and Chabot captured 59 percent of the vote in a year of record turnout.

Driehaus defeated Chabot with 155,089 votes in 2008, when economic turmoil and wars in Iraq and Afghanistan led voters to elect President Barack Obama.

After the 2010 census, Republicans in the Ohio legislature redrew the 1st Congressional District by adding a heavily Republican section of Warren County that ultimately proved too much for Pureval to overcome.

“The fact that it’s a race at all says something about the discontent relative to the president and relative to Steve Chabot,” Driehaus said. “On paper, this race shouldn’t be close at all.”

Chabot disagrees with Driehaus’ assertion that the 1st District is built for his success.

Congressional districts are "all kind of odd shapes and always have been. It’s been that way for over 200 years,” Chabot told WCPO after voting in Westwood Tuesday. “I don’t have much ability to effect that so I just try to represent the people in my district however the lines are drawn as well as possible.”

Reflecting on his 12-2 record in 1st District Congressional races, Chabot said it’s difficult to compare this year’s race to past contests.

“They’re all so different,” he said. “Obviously, the toughest races I’ve had were probably Cranley the second time (2000), Roxanne Qualls (1998) and Tom Luken (1988) because he beat me. The Driehaus race (2008) interestingly wasn’t one of our tougher races. It just turned out to be a year when the Obama vs McCain effect had such a dramatic impact there probably wasn’t a lot that any Republican in this district could have done that year.”

Mann said Chabot held advantages over Pureval in more ways than just the friendly confines of a redrawn district. He’s cultivated a reputation that's hard to alter in the minds of voters: A hard-working, conservative Catholic who cuts taxes and returns unspent office money to the federal treasury. Mann said it was easier for Chabot to negatively define the lesser-known Pureval than it was for Democrats to redefine Chabot.

“They really loaded up on Aftab,” Mann said. “They did politically a great hatchet job, characterizing him for everybody. He tried to do that for Steve, but I mean we know Steve’s not a crook, not a bad person. He’s just not what I’d like to see in Congress.”

Still, Mann still feels some of the sting from the attack ads he endured in his 1994 race against Chabot, including one that mocked his support of anti-crime legislation that called for the creation of 100,000 new police officers but included funding for crime-prevention with community engagement strategies like midnight basketball leagues.

"I remember going out to a German Oktoberfest up in the Northwestern part of Hamilton County," Mann said. "I was asked to speak first and they introduced me and I was booed. I hadn’t even said anything. And it was because of the crime bill. How can a conservative bunch of people be against you for supporting a crime bill?"