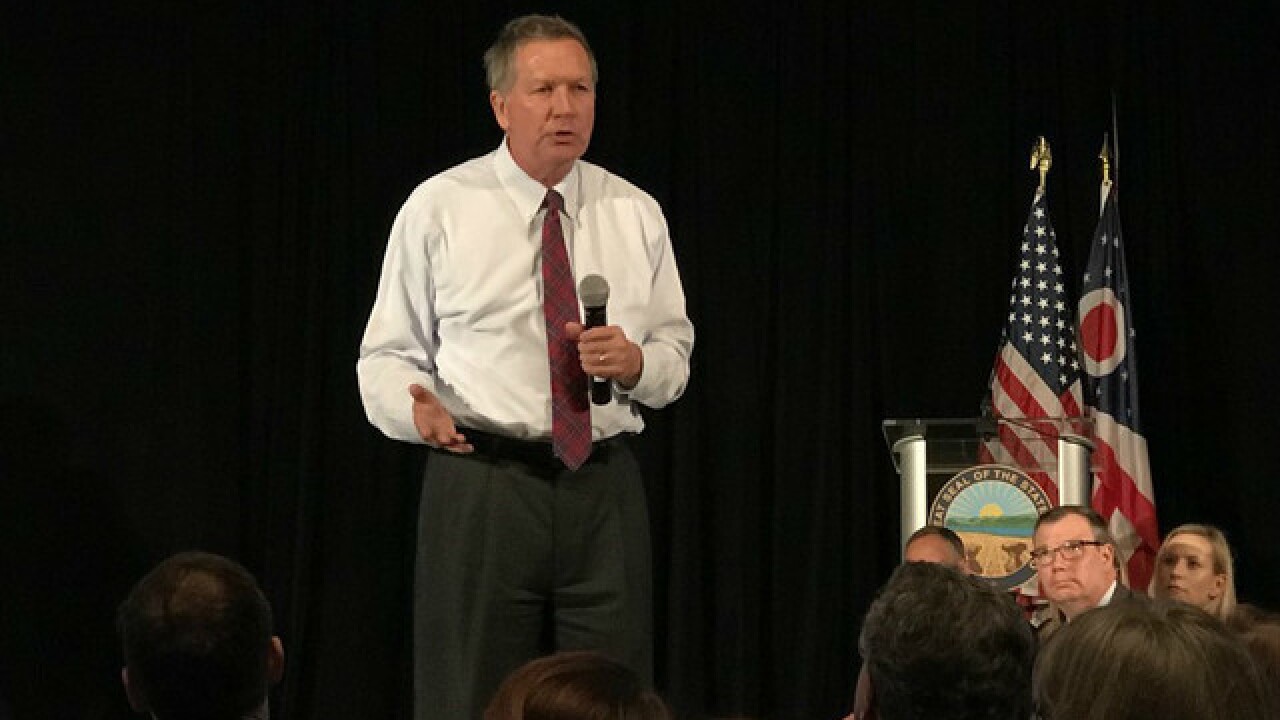 Copyright 2017 Scripps Media, Inc. All rights reserved. This material may not be published, broadcast, rewritten, or redistributed.
<p>Kasich speaks at the event Thursday. Photo by Connor Perrett | WCPO contributor </p>

Ohio Gov. John Kasich warned about a tightened state budget Thursday, and told a Columbus audience full of mostly lobbyists that community action -- not government intervention -- was the best way to solve problems plaguing the state.

Kasich said the tightening of the state budget is the result of an economic slowdown that is being felt in nearly half of all states nationwide.

“Things in life go up, they kind of come down and they go up,” Kasich said before comparing the state’s budget shortfall and rainy day fund to the biblical story about Joseph, who stored grain surplus from Egypt’s seven good years for the seven bad years that would follow.

What’s important, Kasich said, is ensuring the state’s budget is structurally balanced. Without it, he warned, businesses would avoid investments in Ohio.

“If you have a rickety, rocket-y budget where states are willing to go and raise taxes and there’s uncertainty, you can forget it," he said. "These businesses can look at 50 states and they look at the most stable place that exists. I know this. I was in business for 10 years.”

He also pledged to ensure the budget is structurally balanced when he leaves office in 2018, something he claimed wasn’t the case when he took office in 2011. But several directives in the Ohio Revised Code have long required the budget submitted by the governor and passed by the state legislature be balanced.

To increase innovation in the business sector, Kasich said he would appoint a Chief Innovation Officer to the Ohio Institute of Technology. This Innovation officer would use a technique called ‘predictive analytics’ to take research being done at universities and research firms and commercialize it to get the state ahead.

Kasich stressed the importance of community intervention in solving the state’s issues. He said while tackling the state’s opioid epidemic, the largest problem in the state according to Kasich, through government intervention would help, it would not solve the issue entirely.

“You know what’s really going to be effective?” Kasich asked. “Is when you’re in a restaurant and you see a group of young people and you walk over to them and say, ‘Let me warn you about the danger of drugs.’ You see, the best solutions in our country come not from the top down but a combination of the bottom-up and the top responding.”

Calling the current K-12 model of education outdated by a century, Kasich said the problem was, again, too big for a top-down fix from his office. Instead, he encouraged involvement on local school boards to reform the state’s education system. He also said he wanted to add three non-voting business people on every Ohio school board.

Kasich also criticized schools that require students take several years of Spanish when they could instead be participating in programs more in line with their interests. He praised programs that allowed students to get experience outside of the classroom in fields where they could learn how to conduct themselves in a professional way.

“Down in Marietta, in that county down there, they’ve taken like five schools and they have a regular program to introduce kids to jobs, to potential. They get them out in the workplace. You need to get your school to do that,” Kasich urged.

When asked about recent efforts by Washington Republicans to repeal Obamacare, Kasich said the successful expansion of Medicaid in the state under his administration was due, in part, to reforms in the Affordable Care Act. Kasich added he would travel to Washington next week to testify in front of congress about Medicaid expansion.

Connor Perrett is a fellow in the E.W. Scripps School of Journalism Statehouse News Bureau. You can reach him at connor@connorperrett.com or follow him on Twitter at @connorperrett