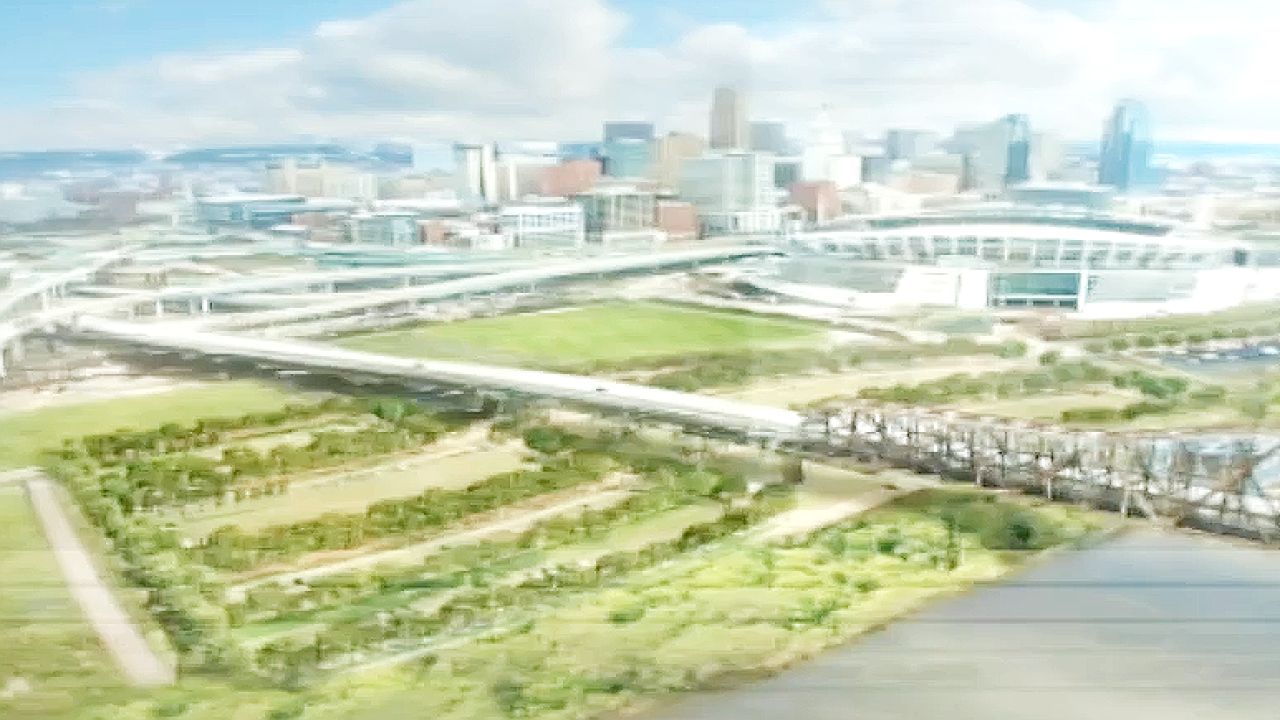 Rendering of the Hilltop property after the county converts it to greenspace.

WATCH the County Commission discusssion and vote below.

CINCINNATI - Faced with fourth-and-long, the Hamilton County Commissioners and the Joint Banks Steering Committee needed a really big play to overcome opposition from the City of Cincinnati and move ahead with The Banks music venue.

And they came through with that and more Tuesday, announcing an historic, blockbuster deal with the Bengals and Hilltop Basic Resources that they say not only greenlights the music venue but adds crowning touches to The Banks as a sports, parks and recreation center and boosts its future as a thriving entertainment, business and residential district.

"This is truly transformative of our front door to the city,” said Thomas Gabelman, attorney for the Joint Banks Steering Committee.

According to the county, the deal, which came together with the cooperation of Hilltop and the Bengals, comes at no additional costs.

"This is a very good deal for county taxpayers," Gabelman said.

Here are the highlights:

> The county buys Hilltop’s riverfront property - 17 acres west of Paul Brown Stadium - at what the county calls fair market price of $29.75 million. The county assessed it at $33 million, Gabelman said.
> The Bengals give up $30 million owed in game day payments to allow the county to buy the Hilltop property and offer it to the Bengals for parking and tailgating.
> The Bengals give up parking areas east of the stadium (Lot 27) for the site of the indoor/outdoor music venue, which is scheduled to open next fall.

When all is said and done, the deal should provide $400 million in economic opportunity for The Banks, the parties said, while:

> Adding 17 acres of greenspace for public use between the Brent Spence Bridge and Paul Brown Stadium,
> Freeing Lot 24 for $80 million in mixed development,
> Eliminating surface asphalt parking lots between the stadiums,
> Opening the door for investments and improvement to Smale Riverfront Park that will advance it by a decade.

The county will turn the three parcels of Hilltop property into greenspace with supports under the lawn so it can accommodate festivals and outdoor events, Gabelman said. Hilltop will pay for the supports.

Assuming the Bengals continue to play 10 home games, it could be available for public parking and other events the rest of the year.

Hilltop will consolidate its operations to half of its property while the county and the concrete and gravel company continues to look for a new site to relocate it.

The commissioners approved the deal by a 3-0 vote.

The parties were able to finalize the deal in just six days after City Council shut the door on an earlier agreement that would have moved Hilltop to Lower Price Hill. But residents worried an industrial presence would disturb their community, and Council passed two motions last Wednesday suggesting the deal go ahead without Hilltop being required to move at all.

One motion said the Bengals should stop trying to steer a project that rightfully belongs to the city and county, and Hilltop shouldn’t expect to settle down in a residential neighborhood if it leaves the Banks.

Mayor John Cranley had been openly critical of the Bengals, but Gabelman and Portune defended the team and Hilltop Tuesday, saying they acted as "good citizens" in making concessions so the deal could work.

Hilltop, which moved its plant operations 50 years ago for the building of Riverfront Stadium, said it is "willing to relocate again so that our riverfront can continue its incredible transformation."

"We care deeply about our community," CEO John Steele, Jr., said in a statement.

The county takeover of the Hilltop property will begin in January. Approximately seven acres along the west side of the Clay Wade Bailey Bridge will be transformed into a green parking system by June 2020. The balance of the Hilltop property will be developed in 2021, subject to the relocation of Hilltop’s plant operations, the county said in a release.

"We look forward to collaborating with Hamilton County and others to ensure that we can identify and secure a suitable option for our concrete and our customer’s asphalt production facilities," Steele said.

The Bengals also released a statement calling the solution "innovative" and saying it adds "meaningful greenspace" to the riverfront.

“Since the very first images were drawn 25 years ago showing what the City of Cincinnati and Hamilton County hoped to accomplish by embarking upon a joint plan to rebuild this community’s riverfront, a key part of the plan has been acquiring the western edge of the riverfront to be held in public trust," the team said. "The Bengals believed in that vision then and we believe in that vision now, and that is the reason we are investing $30 million to make that vision a reality."

"I’m glad Council took action last week to protect our west side neighborhoods, and it clearly worked to put this deal on a new trajectory. They gave up on an unworkable plan, thank goodness, and now have a path forward. I still believe the Bengals should simply say yes to these investments, like the rest of us, without asking County taxpayers for more money. That remains insane to me.”

Bars, restaurants and retailers have come and gone at The Banks because customers have typically disappeared when the Reds and Bengals are not in season. Jean-François Flechet of Taste of Belgium spoke for those there now when he called Tuesday's deal "a game changer for business at The Banks."

“The music venue will not only bring a lot of people, but also the frequency of the events. We’re talking about 150 events a year!” Flechet said.

WATCH Tuesday's discussion on the music venue starting at 52:50: