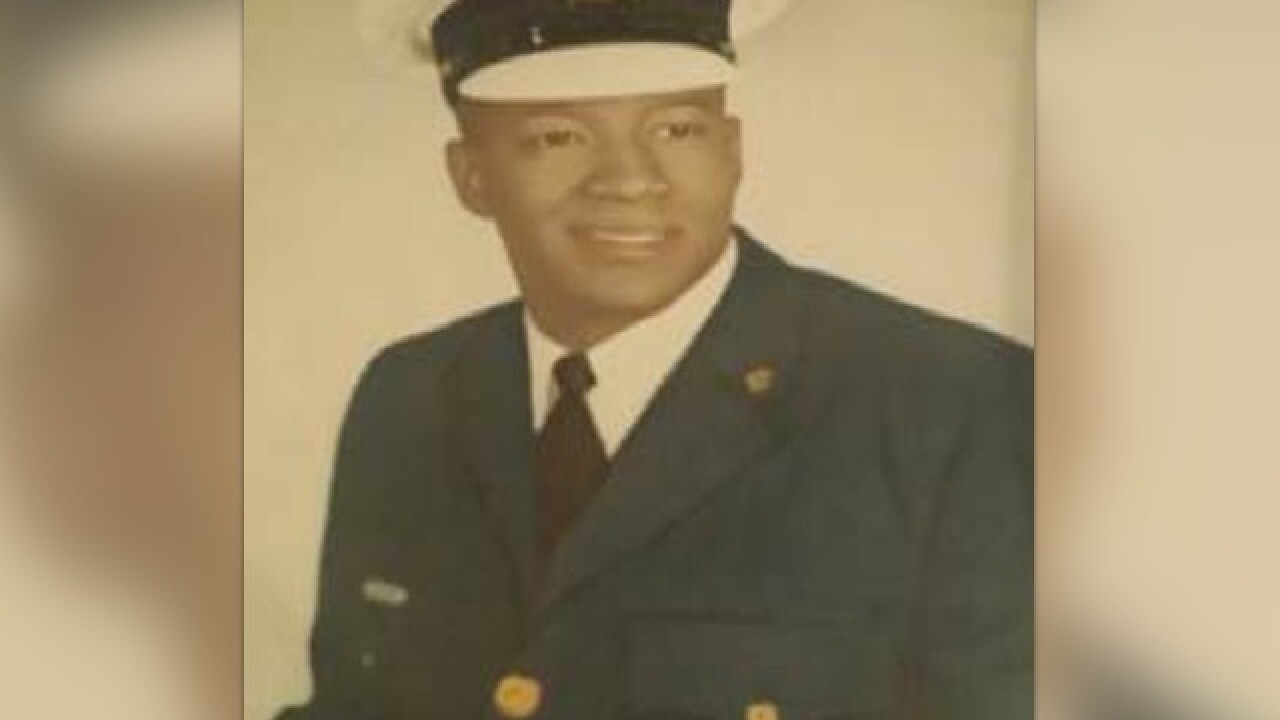 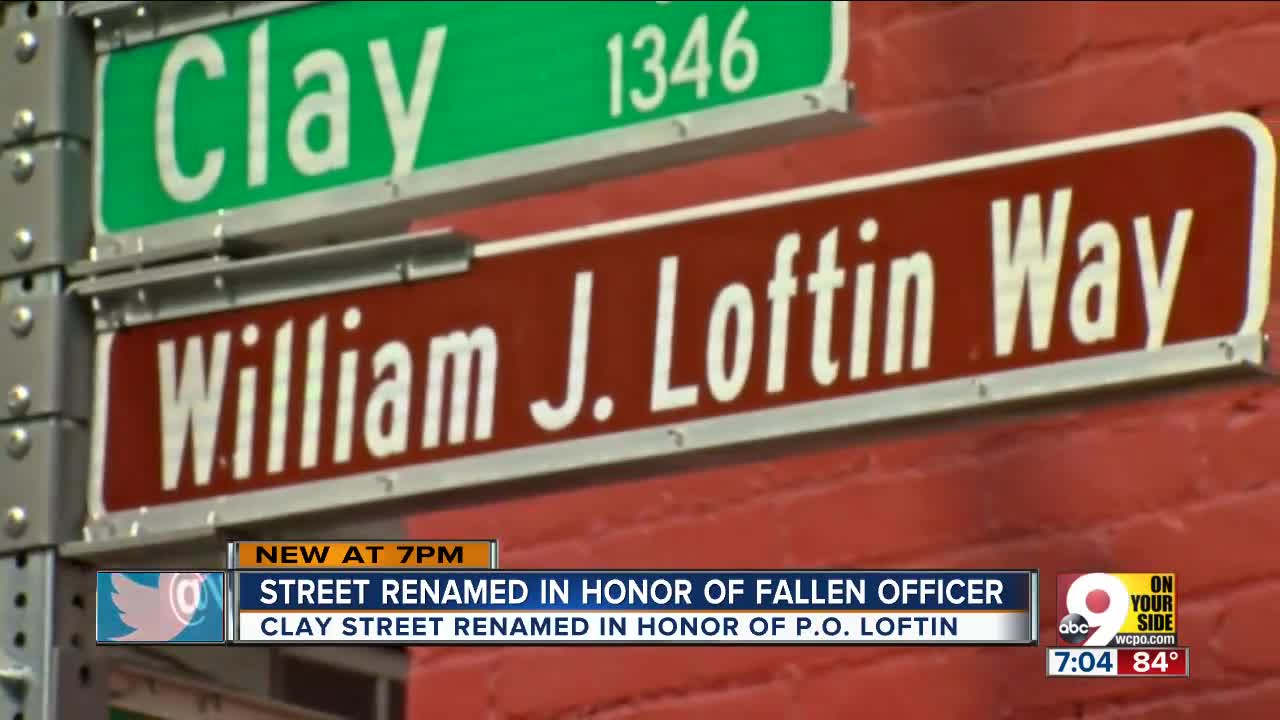 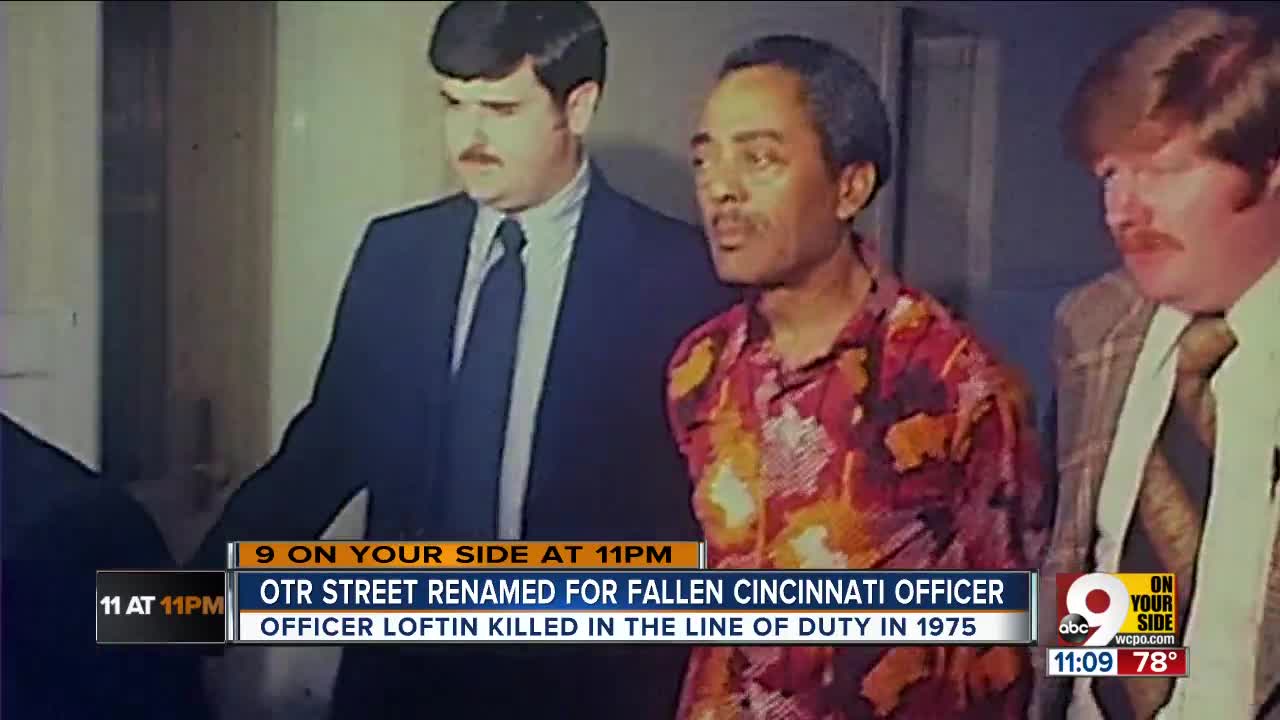 CINCINNATI -- A street in Over-the-Rhine was dedicated on Wednesday to a Cincinnati police officer killed in the line of duty more than 40 years ago.

"When they uncovered (the sign), it really made me pause and kind of choked up," retired officer Joe Hall said. "I know who William J. Loftin is, and for him to have a way is so long overdue."

Officer William J. Loftin, known as Bill and described by his Councilman Wendell Young as "a cop's cop," died after Cleophus Collins shot him in the abdomen at point-blank range on Aug. 26, 1975. He was 36 years old.

"We was one of our original Sentinel members," Young said. "Bill Loftin was a cop's cop. I never knew him to be afraid of any situation or any person. That's the Bill Loftin I knew."

Loftin was shot up the hill in Avondale. According to the Greater Cincinnati Police Museum, Collins had stopped into the Clock Bar on Burnet Avenue and mentioned he was going to shoot a cop.

Minutes later, outside the Burnet Fruit Market, a citizen told Loftin and his partner, Officer Claude Dell, that a man in a nearby car had a gun.

He shot into the air, then shot Loftin when the officers told him to drop the gun. He died later that night.

According to the police museum, Loftin had wanted to be a policeman since he was 7 years old -- a dream his mother opposed. His biography recounts his dedication:

"She was concerned about the dangers of the job, but he said, 'Mom, this is just what I want to be. It's right for me ... If I should die in the line of duty, I'll die happy.'"

Davis, who was 18 when her beloved brother died, struggled to keep her tears in check as she watched the unveiling Wednesday. She wished her late mother could have seen the outpouring of support and fond remembrances, she said, but knew her entire family was with her in spirit.

"I feel like they are smiling down at me today," she said. "Even my brother. I feel like he will say, 'Little Dianne, oh my God, you did all this for me.'"

A supervisor described Loftin as "one of the most capable, dependable, loyal, and fearless officers I have had the pleasure to work with."

According to the police museum, Loftin had received 12 letters of appreciation and/or commendation in his 8-plus years of service, including four from the police chief. Another, for a failed attempt to revive a child who had drowned in a pool, was on the chief's desk when Loftin died.

Loftin and his partner shot Collins after he fired at them. Collins eventually was convicted of murder and died in prison in 2007.

The street naming arrived a day after the three-year anniversary of Officer Sonny Kim's death. TrePierre Hummons shot and killed Kim during an ambush in the city's Madisonville neighborhood on the morning of June 19, 2015. Police then shot Hummons, who also died.