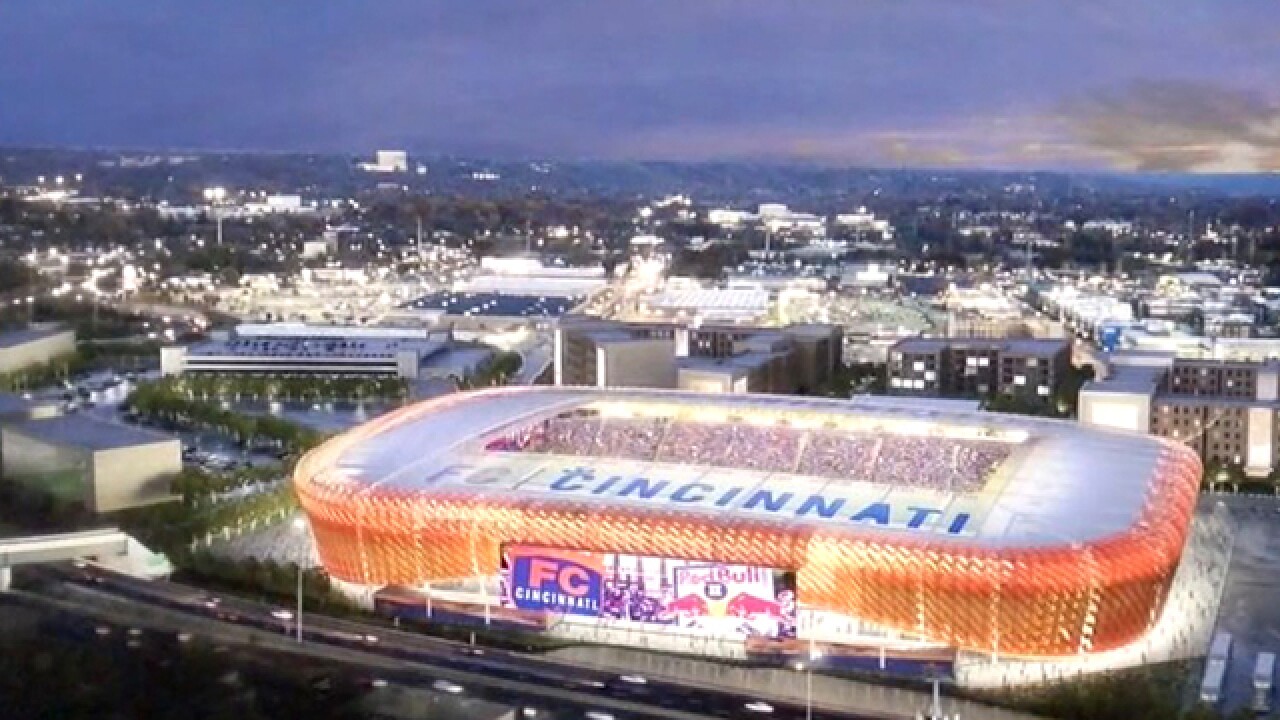 CINCINNATI -- Outgoing City Councilman Charlie Winburn said he and his colleagues weren't committing the mistakes of history by spending taxpayer money on infrastructure around a stadium.

Time will tell if they committed an entirely new one.

Council's Budget and Finance Committee, which Winburn chairs, agreed Monday to spend up to $37 million for infrastructure at an Oakley site FC Cincinnati has identified for its soccer stadium. A final vote comes Wednesday.

The vote was a crucial hurdle for the soccer club as it tries to join Major League Soccer. The club should know Dec. 14 whether it has beaten out rivals Nashville and Sacramento for one of the two coveted spots in the league's expansion plans.

Mayor John Cranley, who championed the infrastructure plan, brushed aside criticism, saying any comparisons to Hamilton County's widely reviled deal for Paul Brown Stadium were off-base. And he downplayed many people's concerns as "nitpicking" the plan's details.

"I have no fear that within one year, if not sooner, this will have been viewed as a historic no-brainer," Cranley told the committee.

What makes this different? FC Cincinnati General Manager Jeff Berding says the club would own the stadium and pay for maintenance, unlike the deal the Bengals have at Paul Brown. Those maintenance costs have been a drag on county finances, and critics pointed out Berding managed the campaign to pass a sales tax hike to build the riverfront stadiums.

And although the Greater Cincinnati Development Authority, commonly known as the Port, would be the stadium's owner, Berding said that's only for financing purposes. Because club ownership will have invested their own money in the facility, they'd own it at the end of a 20-year lease with the Port.

Councilmen Chris Seelbach and P.G. Sittenfeld were the lone "no" votes. Both had announced their intentions on social media within the past week or so. Councilwoman Yvette Simpson abstained; she had a list of questions for the city administration and said she'd like to be able to vote "yes." Councilman Wendell Young was absent as he recovers from an illness.

They voted on an ordinance that was slightly different from what Cranley proposed a week and a half ago: The new version leaves $2.5 million in an Oakley tax-increment finance district and instead relies on $2.5 million from the city's capital budget.

How does tax-incremented financing work?

When a developer builds on a property, the value goes up. The city takes the extra tax money from the increased value of the property and puts it toward paying off the related public infrastructure -- in a way, making the entire thing self-funded.

The switch came after Oakley Community Council voted against the plan Sunday night: The group didn't want the TIF money taken away from two other development projects already planned for Madison Road.

The stadium plan had plenty of support and criticism at Monday's four-and-half hour meeting, and some questions were left unanswered.

More than 100 people attended -- one of the largest spectator crowds City Hall has hosted all year -- forcing some to sit in the overflow gallery upstairs.

Of the 30 people who spoke to the committee, they seemed evenly divided between those who thought a Major League Soccer franchise was a once-in-a-lifetime opportunity, and those who believed city dollars were better spent on building a new Western Hills Viaduct and helping with childhood poverty or the heroin epidemic. Cranley noted the dollars being used to finance the stadium could not be used for poverty or addiction initiatives.

“I promise we will be announcing thousands of jobs if we make this commitment to this public infrastructure," said Cranley, who added he was in talks with several companies about moving to the site once infrastructure was in place. "You have my word on this."

“Cities are either growing or dying," Cranley said. "This is a once-in-a-lifetime opportunity."

While Cranley and the council members who supported the project -- David Mann, Kevin Flynn, Christopher Smitherman, Amy Murray and Charlie Winburn -- touted the opportunities it would bring to the city, critics focused on its shortfalls.

Jeff Capell, chairman of No More Stadium Taxes, blasted Berding for hiding the details of the stadium plan until after the election, and for not being transparent about its costs.

“This has been a sham of a process,” Capell said. “The real price tag on the project isn’t available to anyone.”

And some council members agreed. Seelbach and Simpson peppered city leaders and Berding with questions about exactly how much this project would cost taxpayers.

Under Cranley’s plan the city is promising $2.5 million from its 2019 capital budget. The city is already facing a $19.7 million projected budget deficit in its 2018 budget for fiscal year 2019, according to a September 2017 memo from City Manager Harry Black.

Seelbach questioned whether any houses in Oakley would be demolished for wider roads. City Engineer Don Gindling said it was impossible to know until a traffic impact study was done.

“It seems those houses that would be demolished should have notice … before council takes a vote in which their houses will be demolished.” Seelbach said.

“I don’t know what the Bengals and Reds pay their stadium workers,” Berding said, but he agreed the club would work with city leaders on issues they felt strongly about.

Seelbach and Simpson also were troubled by a possible $33 million funding gap between what the government is providing and what FC Cincinnati says it needs to support its $200 million stadium on the former Cast-Fab site. While the club has pledged to privately finance its stadium, it asked the city and county for $75 million in infrastructure.

The city's offer is up to $37 million, but Berding said he's only counting on $27 million. Hamilton County commissioners are expected to approve spending $15 million for a parking garage Wednesday. That leaves a gap of $33 million.

About the infrastructure money

Michael Moore, the city's director of Transportation and Engineering, previously told WCPO it was far too soon to know what work might need to be done because there's been no traffic study.

At Monday's meeting, Gindling said he thought $12 million to $15 million in infrastructure updates would be needed just to open the stadium. Another $70 million or so might be needed depending on what development follows, Gindling said.

"A lot of details are missing until we get an actual traffic impact study to know what we have to do," he said.

Cranley argued critics were too hung up on details and missed the big picture.

"I believe as community we should be more focused on winning the bid than nitpicking every little piece of this when so much is at stake," he said. He left the meeting well before the vote.

FC Cincinnati plans to purchase 28 to 29 acres, but Berding said the stadium would only take up half that land. The rest could be used for restaurants, bars and other development -- an effort, he said, to mirror the experience soccer fans now have around the club's home at Nippert Stadium.