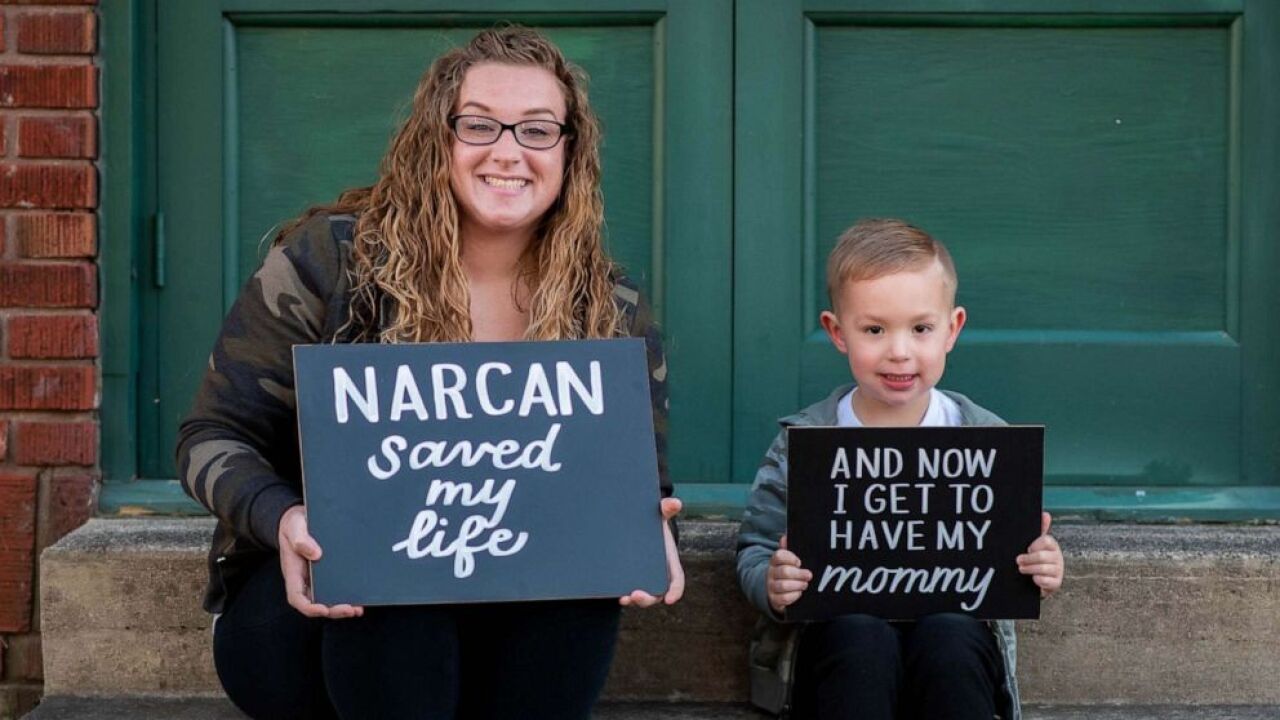 Copyright 2019 Scripps Media, Inc. All rights reserved. This material may not be published, broadcast, rewritten, or redistributed.
Ali Elizabeth Photography and Key Words Co.
Erika Hurt poses with her 3-year-old son Parker in a photo to celebrate her three-year sobriety anniversary.

Erika Hurt describes reaching rock bottom in 2016 when a photo released by police went viral showing her overdosed on heroin in the driver's seat of a car with her 10-month-old son in the backseat.

Hurt had to be revived using two doses of Narcan -- a nasal spray that can help reverse an opioid overdose -- when first responders in Hope, Indiana, found her. She was on probation when the overdose happened and was sentenced to six months in a locked-down rehabilitation program.

Two days into her stay at the rehab program, Hurt said she saw the photo of herself air on TV during the local news. Police released the photo to the media at the time in hopes of "trying to shine a light on what was happening in terms of heroin overdoses," Hope Town Marshal Matthew Tallent told "GMA."

Now, three years later, new photos of Hurt and her son Parker are going viral -- pics that show them together and happy and marking three years of sobriety for Hurt.

"I hope people see how low my bottom was and that they know if their bottom is not that far from mine, that they can come back too," Hurt, 28, told "Good Morning America." "I just think it's really cool because I feel even more planted and stable in my recovery [today]."

For Hurt, who started using pain pills at age 15, it was "humiliating" to see herself as the poster child for addiction.

The photo though is now what Hurt credits with propelling her forward to recovery and helping her maintain her sobriety for three years.

"I definitely have [the photo] imprinted in my mind," she said. "I use it to remind myself that that's where my addiction is going to take me if I do relapse."

Hurt said she's also motivated by Parker, who, she remembers, wouldn't interact with her during twice-weekly visits to see his mom while she was away at rehab.

"We didn't have a bond, and that was really sad," said Hurt, who was sober during her pregnancy but then relapsed two months after she gave birth. "I was physically there for my son but I was not mentally there for him and I missed all of his first milestones."

"That was ultimately my turning point, when I decided truly want to be sober and be in my son's life," she added. "Now we're inseparable pretty much. He's a mama's boy."

Hurt, who works full time and has full-time custody of Parker, said their close bond is the reason she wanted to include Parker in the photo shoot to celebrate her sobriety.

She is holding a sign that says "Narcan saved my life" in the photos because she wanted to give people "a different picture" of how a life can turn out after an overdose.

Ali Elizabeth Photography and Key Words Co.Erika Hurt poses with her 3-year-old son Parker in a photo to celebrate her three-year sobriety anniversary.While Hurt for the past three years has looked at the photo of herself overdosed every year on her sobriety date, she said she thinks the new photos of herself and Parker will be the photos she now looks to for motivation.

This Halloween, she took Parker trick-or-treating at the police station in Hope, where they saw Tallent, the police chief who released the photo of an overdosed Hurt.

"I'm so happy that Erika has continued her sobriety and has her wonderful little boy who is growing up," he said. "To see her in that light, as a doting mother, is just a great thing and I'm happy that she stayed sober."